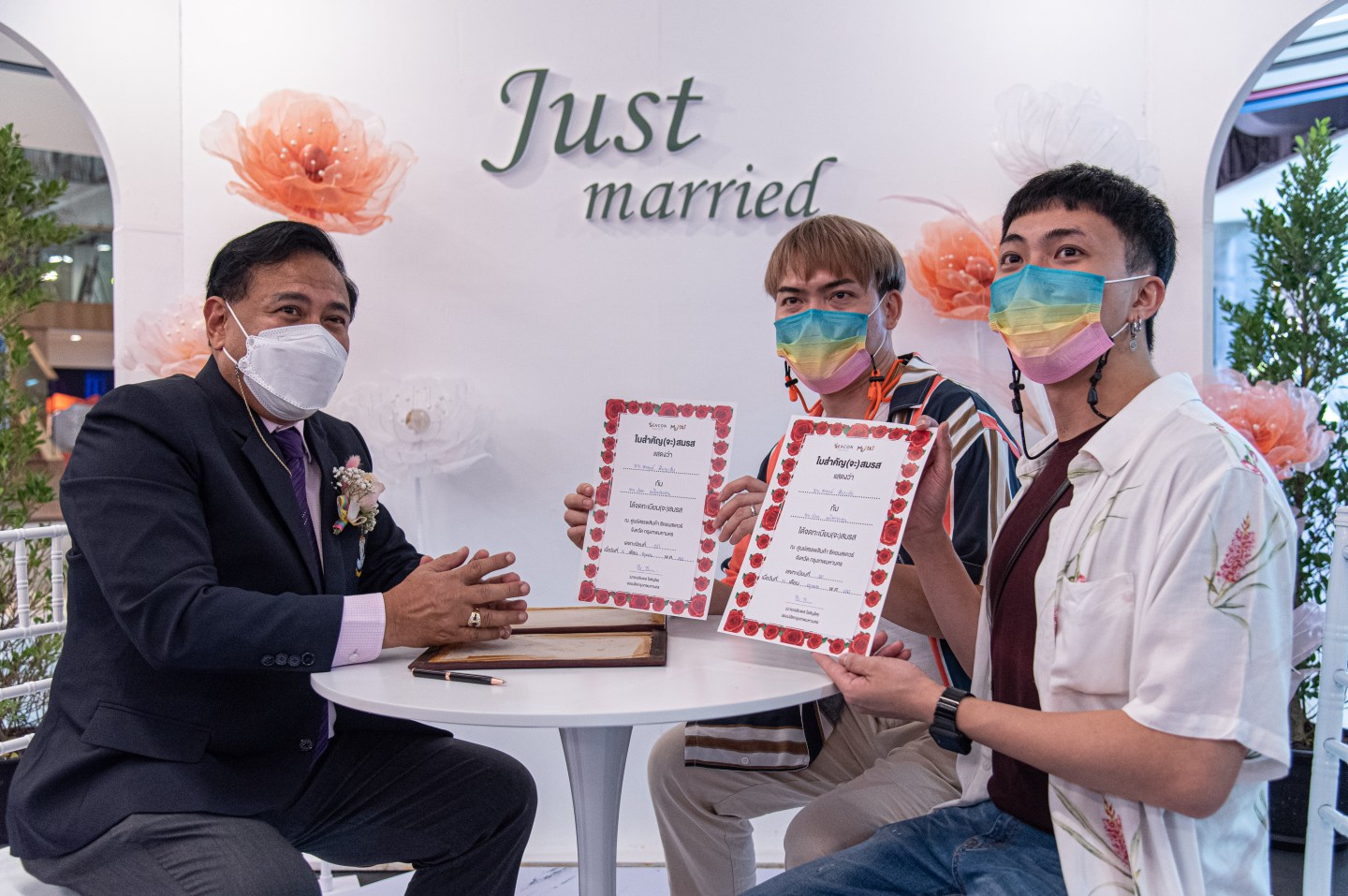 Here’s the thing: Jim Obergefell just wanted to marry the love of his life. “I’m just Jim,” he told The Washington Post.  “I just stood up for our marriage.”

It was also a poignant dash to get the acknowledgment, joy, and protections that marriage provides. His partner of 20 years, John Arthur, then suffering from advanced ALS, managed to say his vows just three months and 11 days before he died.

Obergefell simply wanted to be named as the surviving spouse on his husband’s death certificate, something that the state of Ohio, where same-sex marriage remained illegal, refused. And that’s how, way back in 2015, “just Jim” became the central figure in Obergefell v. Hodges, the landmark case that required all states to issue marriage licenses to all LGBTQ+ couples and to recognize valid marriages performed elsewhere.

While Obergefell became the unlikely face of a civil rights struggle, his story is emblematic of how change is made: It’s often uniquely personal.

Linda was a 7-year-old girl with a long, dangerous walk to an underfunded school before she became the Brown in Brown v. Board of Education. Chastity C. Jones had to be willing to lose her customer service job to save her dreadlocks before becoming the inspiration for the CROWN Act, which prohibits discrimination based on hair texture or style. When personal stories converge, they become a collective movement. Then a platform for activism. Then, they become history.

Lately, history has been an issue.

Teachers, administrators, and librarians are encountering draconian legislative barriers restricting how race, gender, identity, and history can be taught. It’s happening at every level. Heinemann, a division of Houghton Mifflin Harcourt, is halting the publication of specific kindergarten through second-grade curricula until it sorts out the pressures from conservative legislatures. One middle school principal, who took a new DEI role in the Cherokee County School District in Georgia, was targeted before her arrival and chased from her job by an organized mob of community members. According to researchers from the University of California, Los Angeles, and the University of California, San Diego, some 900 school districts across the country have been similarly targeted by organized, anti-critical race theory protests.

The battle to curtail discussions about race and identity is a workplace issue, too.

The limitations around discussing our shared history put our civic capacity to shape healthy communities at serious risk. Every news story has an origin story, and in an environment where books, information, and nuanced discussion are under attack, it’s going to be increasingly difficult to find the contexts that explain them.

Just look at the headlines:

They can’t all become heads of movements. We have to catch the threads that make equality possible before they disappear for good.

Currently, the protections provided by the Obergefell decision hang in the balance. House Democrats and 47 Republicans rushed to propose the Respect for Marriage Act, federal legislation that would require all LGBTQ+ marriages performed in states where it is or was legal to be recognized, a meaningful but partial backstop if Obergefell is overturned by the Supreme Court.

But as we watch equality unwind in real and record time, it’s worth considering that if we can’t talk about what actually happened, and what is happening now, we cannot design a better future—or country. And isn’t that what we’re all supposed to be doing?

I hope you enjoy whatever comes next for you this weekend.

The racist history of so many summertime favorite things! Some of you may already be familiar with the hidden racist history in some signature summer delights. There’s swimming, square dancing (I understand that this is not popular anymore) and the tasteless tomatoes in your salad. The erasure of African and Native American influence in barbeque. Oh, and the man who actually created Jack Daniels! I mention them because well, racism, but also because when you know the origin story of what’s around you (and understand the people whose names have been conveniently left off the page), suddenly, things become clearer somehow.

Take macaroni and cheese, for example.

The cheesy delight comes to the world by way of Italy and has been around for centuries. But the uniquely American version that appears on so many picnic (and Thanksgiving) tables comes by way of James Hemings (1765 – 1801), a culinary innovator, master chef, and brother of a woman named Sally, both of whom were enslaved by Thomas Jefferson. Who, by the way, had the additional nerve to take credit for the dish.

Hemings trained as a French chef and had enormous influence. In addition to mac-and-cheese, he introduced crème brulée, meringues, ice cream, and French fries to elite palates in the U.S. And when then bitter enemies Alexander Hamilton and Thomas Jefferson, along with James Madison, sat down to “hammer out their differences” on June 20, 1790, it was Hemings who cooked the meal.

The enslaved uncle to Jefferson’s enslaved children helped establish fine dining in the young country. (To be accurate, Jefferson freed Sally’s children much later in their lives, but you get my point.)

So, history, while it can be delicious, can also be deceiving. It really does make a difference who's in the room when it happens, after all.

“It ended in Mr. Madison's acquiescence in a proposition that the question [i.e., assumption of state debts] should be again brought before the house by way of amendment from the Senate, that he would not vote for it, nor entirely withdraw his opposition, yet he would not be strenuous, but leave it to its fate. It was observed, I forget by which of them, that as the pill would be a bitter one to the Southern states, something should be done to soothe them; and the removal of the seat of government to the [Potomac] was a just measure, and would probably be a popular one with them, and would be a proper one to follow the assumption."

—Thomas Jefferson on the Compromise of 1790