Will Putin turn the gas tap back on for Europe? Russia has given its clearest signal yet 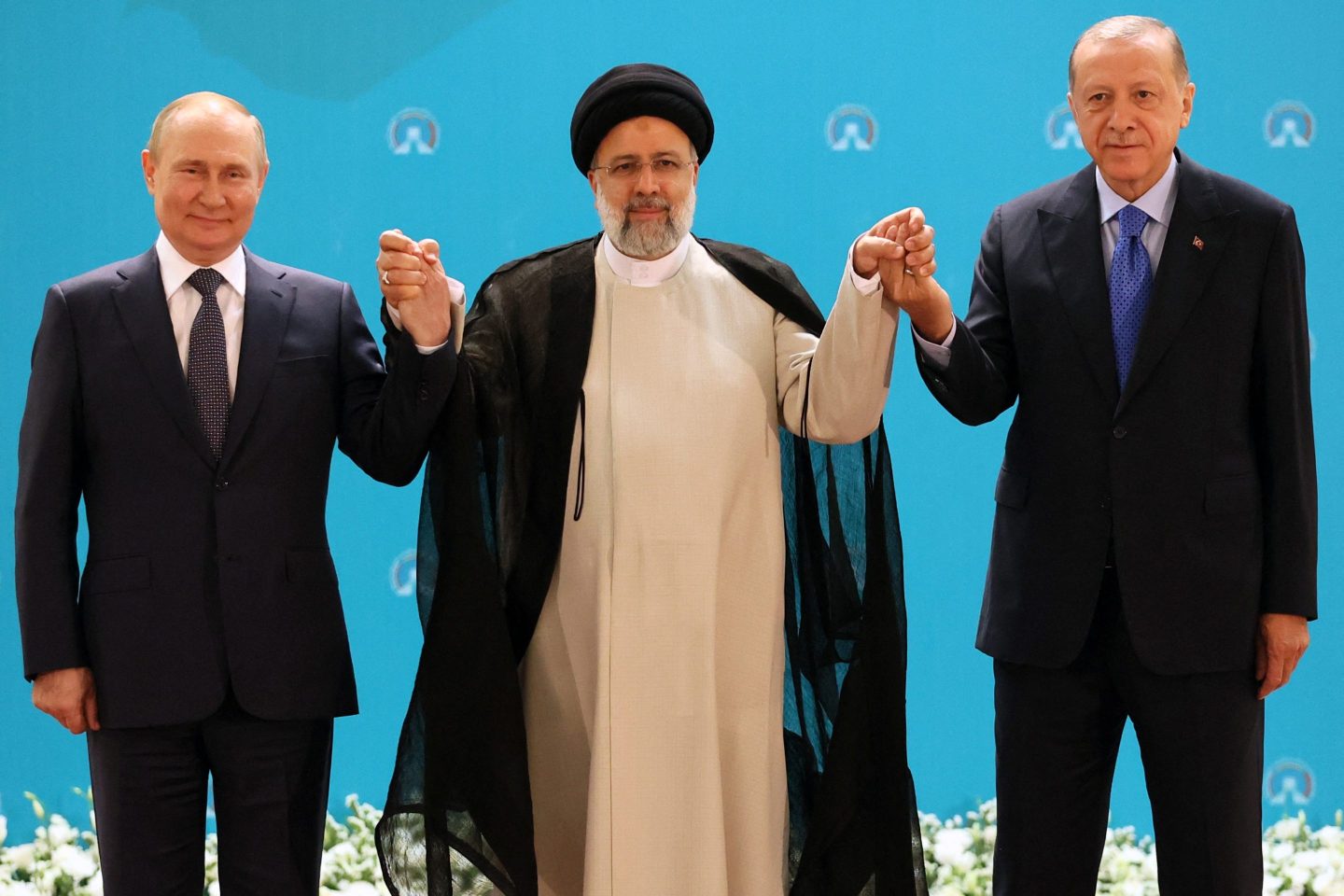 Russian President Vladimir Putin signaled that Europe will start getting gas again through a key pipeline, but warned that unless a spat over sanctioned parts is resolved, flows will be tightly curbed.

Europe is on tenterhooks, waiting to see whether gas flows resume on Thursday when maintenance on the Nord Stream pipeline is set to end. Putin gave the clearest signal yet that Moscow plans to restart at least some flows.

But if a pipeline part that was caught up in sanctions isn’t returned to Russia, then the link will only work at 20% of capacity as soon as next week — as that’s when another part that’s now in Russia needs to go for maintenance, Putin said. After frantic diplomatic efforts by Germany, the turbine is on its way home from Canada.

“If another comes, two will operate. If not, just one, so 30 million cubic meters will be pumped per day,” he told reporters after a summit in Iran late Tuesday. He wants the part back in Russia, along with all its paperwork, he said.

Gas prices edged higher as traders struggled to make sense of Putin’s comments. On the one hand, it’s positive as many in the market expected flows not to come back at all. But the conditionality just adds to the uncertainty.

“It’s absolutely clear that Moscow is cutting supplies for geopolitical reasons — it wants to create a European gas crisis this winter to bring Europe to its knees to the point where it cuts support to Ukraine,” said Tim Ash, a senior strategist at Bluebay Asset Management.

At the moment no gas is flowing through the biggest pipeline to Europe because of maintenance, just as the continent is trying to refill its storage for winter. Before maintenance, gas was flowing at about 40% of Nord Stream’s capacity. Russia has also curbed flows through other routes, such as via Ukraine.

Across the region, officials and businesses have been on edge as to whether Russia will reopen the tap. The European Union is working on the assumption flows will be cut and scrambling to find ways to reduce consumption, while governments race to secure alternative supplies. The threat of shortages is undermining the euro and adding to the risks of recession.

“What Gazprom is going to do tomorrow is your best guess as well as ours,” said European Commission spokesman Eric Mamer. “What is clear is that when we are preparing winter contingency plans, we base ourselves on the worst possible scenario.”

Even before the works, Gazprom slashed deliveries through the pipeline, citing technical issues at a separate asset that compresses gas for the link. Earlier this year the company cut supplies to some EU countries over a pay dispute, and more recently it declared force majeure on shipments to several European buyers.

Near Russia’s Baltic coast, Gazprom’s Portovaya compressor station is where gas supplies start their 1,200 kilometer (745 mile) journey to Germany through Nord Stream. Russia cited issues with the station — a separate legal entity from the pipeline, with different ownership — when it cut supplies last month.

Portovaya has six major gas turbines, enabling it to build sufficient pressure to send gas over such a long distance. Only two of those units were operating before Nord Stream shut for maintenance earlier this month, according to Gazprom. The other components needed to be serviced by their manufacturer, [hotlink]Siemens Energy[/hotlink] AG.

One turbine got stranded in Canada — where it was being repaired — due to Ottawa’s sanctions against Moscow. Canada released the component to Germany, following calls from Berlin, and other turbines can now go for similar work. But there’s no clarity on when this might happen, and no details on the remaining two turbines or their condition.

Gas flows through Nord Stream were running at about 40% of capacity prior to pipeline maintenance, due to the technical issues related to the turbines, according to Gazprom. A company executive said force majeure warnings issued earlier this week were a reflection of the reality that Gazprom can’t fully meet its obligations to European clients due to the turbine situation.

Germany and Italy, both key buyers, have previously called the drop in flows a political move, a claim that Russia has shrugged off.

German officials plan to wait until at least Monday to take stock of any potential cut in shipments. Even if flows return at reduced rates, the rift between Russia and the EU over energy supplies remains.

Gazprom, flush with cash due to high gas prices in Europe, is planning for the possibility that tensions spike further, according to a person close to the company’s management.

Further delays in resuming supplies or even a temporary interruption are possible as pressure tactics in the coming months, before colder temperatures raise the stakes later in the year, according to a separate person close to the company.

“In order for Russia to continue to have geopolitical leverage they need the gas to flow, in order to have the threat of shutting it off,” said Nick Campbell, a director at consultant Inspired Plc.