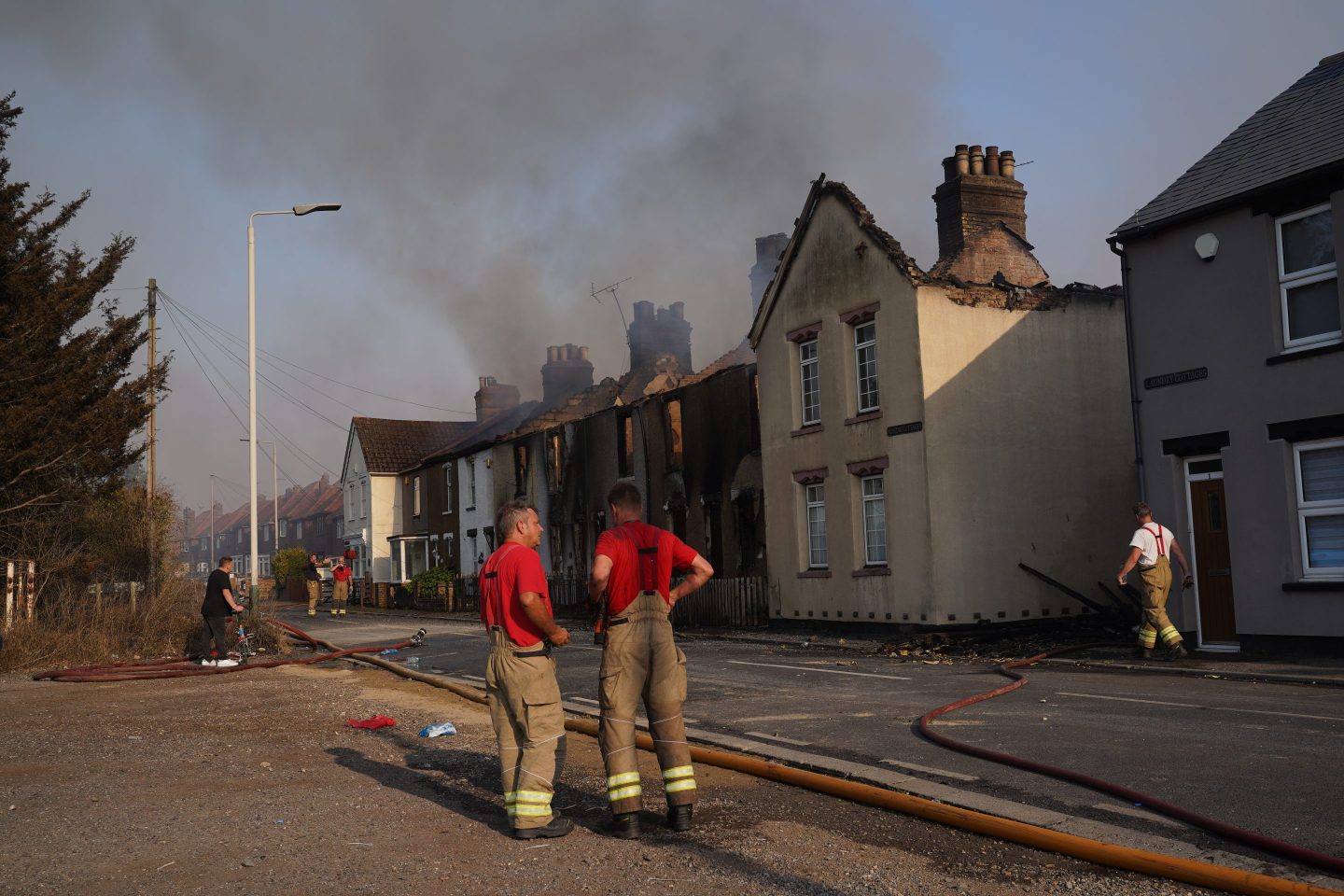 Firefighters at the scene of a blaze in the village of Wennington, east London
Yui Mok — PA Images via Getty Images

Britain sizzled on Tuesday as temperatures exceeded 40 degrees Celsius (104F) in a ferocious heatwave that also led to record-breaking levels across Europe.

As wildfires raged in France, Greece, Portugal and Spain—destroying thousands of hectares of land—emergency services in the U.K. capital also battled an unprecedented number of fires brought on by the hot weather.

“Yesterday was the busiest day for the fire service in London since the Second World War,” London Mayor Sadiq Khan told BBC Breakfast on Wednesday.

Khan said Wednesday that while calls flooded in a day earlier, firefighters were already working to extinguish blazes all over the city, some of which required as many as 30 fire trucks.

A total of 41 properties in London were lost to fires on Tuesday, Khan added, while 16 firefighters were injured.

All of those who sustained injuries were now back on their feet, he said.

“This shows the consequences of climate change with temperatures exceeding 40 degrees [Celsius],” Khan told the BBC. “It hasn’t rained in our city for more than a month. The grass is incredibly dry, it’s like tinder, and so it can catch fire really easily and the fire spreads really fast.”

The London Fire Brigade declared a “major incident” on Tuesday as homes and woodland around the city burned, stretching the service’s resources.

Taking to Twitter, the LFB urged people not to have barbecues or bonfires, not to leave broken bottles or glass on the ground, and to dispose of cigarettes safely.

Fire crews were also called out to tackle blazes in various other parts of the U.K. yesterday, including Kent, Cornwall and Pembrokeshire.

The heatwave smashed records in Britain on Tuesday, with the U.K. recording its hottest ever temperature of 40.3 degrees Celsius (104.5F) in Coningsby, Lincolnshire.

Things turned much milder on Wednesday, with London seeing highs of around 27 degrees Celsius (80F).

However, as Britain let out a collective sigh of relief, much of Europe continued to bake, with hundreds evacuated as a fire took hold near Athens, Greece, and gas tanks exploded after being engulfed by fires in the Italian region of Tuscany.