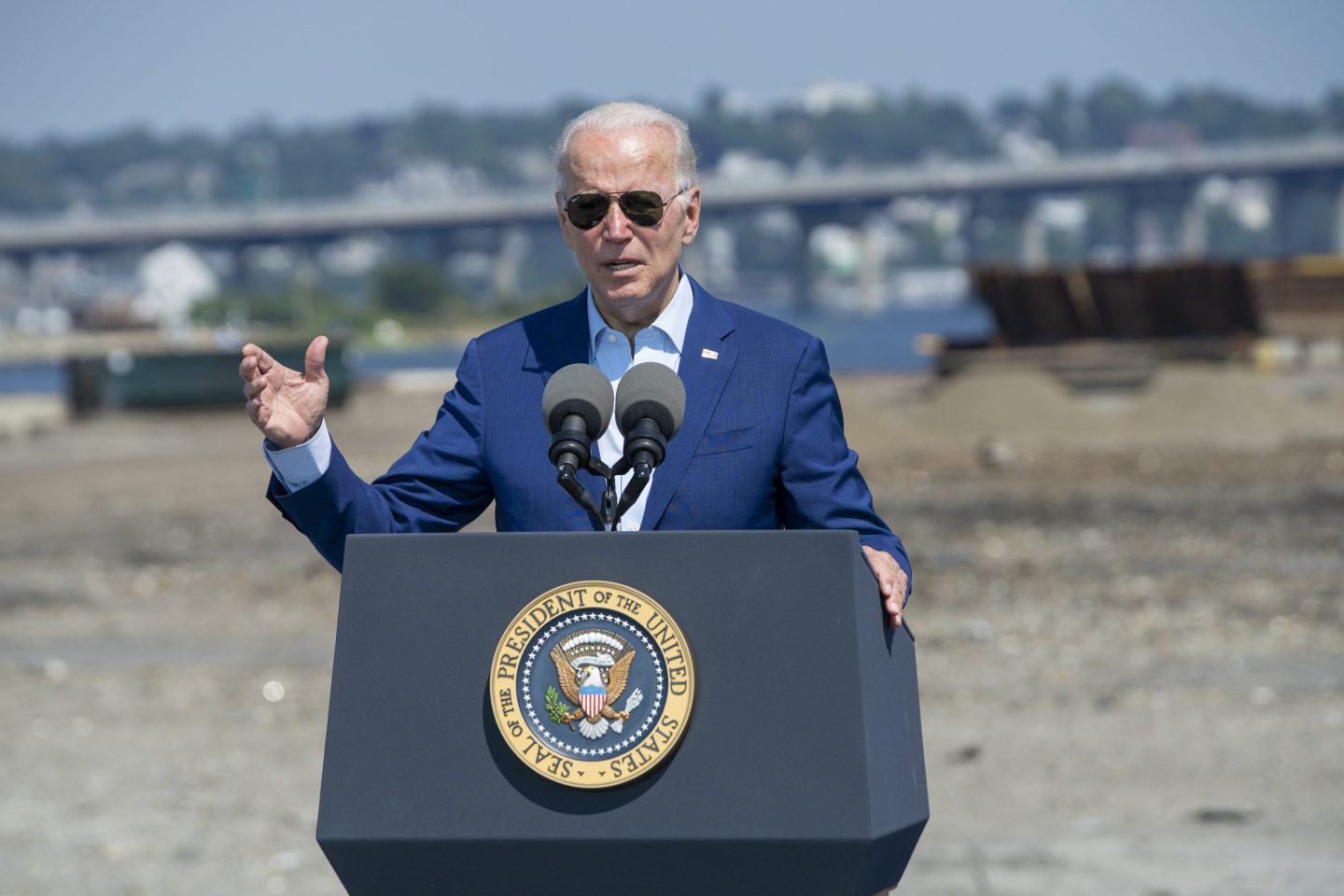 Biden announced executive action to confront climate change, including plans to steer federal dollars to heat-ravaged communities, though he's holding off for now on an emergency decree that would allow him to marshal sweeping powers against global warming.
M. Scott Brauer—Bloomberg/Getty Images

But with an eye toward retaining Manchin’s support for some measures, Biden held back on declaring a formal climate emergency—a move that would unlock broad new powers to develop clean power while restricting the extraction and export of fossil fuels. He simply called warming an emergency.

“Since Congress is not acting as it should—and these guys here are but we’re not getting many Republican votes—this is an emergency, an emergency, and I will look at it that way,” he said.

The president is under pressure to meet his campaign promises of aggressive action against climate change without also alienating Manchin, a moderate Democrat whose vote is critical in the evenly divided Senate. The West Virginia lawmaker represents a state rich in coal and natural gas and has drawn much of his own wealth from the coal industry.

The administration hopes to retain Manchin’s support for an important health-care bill that would lower costs for both prescription drugs and Obamacare insurance plans before midterm elections in November. White House National Climate Advisor Gina McCarthy downplayed Manchin’s impact on the rollout.

“I do not know what Congress is anticipating now, or any one senator, but the idea that the president is initiating here is to acknowledge the challenge,” McCarthy told reporters on Air Force One.

White House officials ruled out declaring a formal emergency this week. But it remains under consideration, and Biden hinted that he would soon make the move official.

“Climate change is an emergency,” he said. “And in the coming weeks I’m going to use the power I have as president to turn these words into formal, official government actions through the appropriate proclamations, executive orders and regulatory powers that a president possesses.”

Biden’s climate moves include steps to nurture offshore wind development in new areas along the U.S. Coast—both alongside oil drilling in the Gulf of Mexico and in waters off Florida, Georgia and the Carolinas. Biden is directing federal regulators to propose the first wind energy areas for development in the Gulf—a step toward auctioning leases to build the renewable projects there—said a senior administration official previewing Biden’s remarks.

Cooling centers and efficient air conditioners would be added to the LIHEAP portfolio, the official said. The program, run through the Department of Health and Human Services, received $4.5 billion in funding as part of the American Rescue Plan Covid stimulus law passed last year and $500 million more in the bipartisan infrastructure package.

Biden also announced the largest-ever infusion of funding—$2.3 billion this year—for a federal grant program that helps communities reduce their vulnerability to heat waves, droughts, hurricanes and other impacts of a warming climate.

Although Biden is directing Interior Secretary Deb Haaland to advance wind energy development in the southern Atlantic and along Florida’s Gulf Coast, he held off on reversing an order by former President Donald Trump that ruled out new offshore energy leases in those waters. That move would be legally risky and could be unnecessary in the face of action by Congress, where the House just passed legislation to restore wind leasing in the region.

Biden has laid out a goal of deploying 30 gigawatts of offshore wind power by 2030, with auctions of territory near California expected later this year, and, ultimately, lease sales on almost every U.S. coast.

Biden is grappling with how to squeeze more legislative accomplishments out of a narrowly divided Congress. In the Senate, Manchin and every other Democrat effectively possess veto power over any bill Democratic leaders try to advance using the fast-track budget reconciliation process, which averts a Republican filibuster by requiring only a simple majority for passage.

Democrats haven’t completely abandoned hope of a reconciliation package that includes climate and tax measures. Manchin suggested he might be open to considering them in September, after further reports on US inflation and the Federal Reserve’s response.

The senator has said his reticence to move forward on major Democratic priorities is based on deep concern about inflation, though supporters of the climate and spending measure he blocked argue it would cut the federal deficit and stands a better chance of slowing price increases than accelerating them.

—With assistance from Nancy Cook.