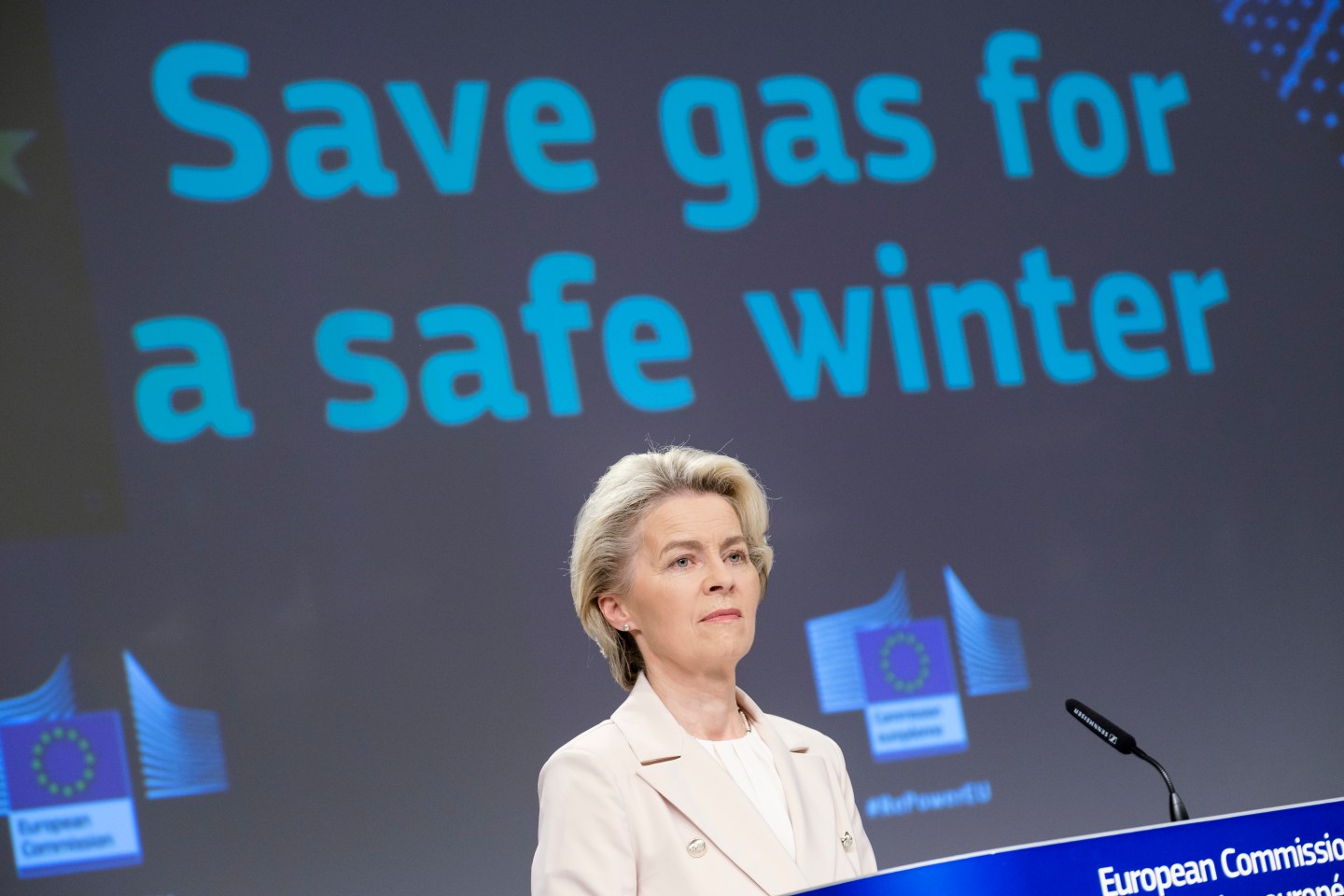 EU Commission president Ursula von der Leyen is prepared to drive prices for natural gas higher by paying a premium to gobble up as much of the world's LNG supply as possible.
Thierry Monasse—Getty Images

Europe is prepared to drive up the cost of everyone’s heating bills further if necessary in order to secure its supply of natural gas for the upcoming winter.

According to European Union officials, whatever the world market can pay for a tanker transporting a super-cooled form of the fossil fuel across international waters, Europe will be willing to top it.

So far the plan to secure a greater share in the global scramble for liquified natural gas by paying through the nose is working, said one senior figure in Brussels speaking on background.

Since suppliers around the world get a better deal with Europe over countries that either could not or would not match its bid—for example those in Asia—EU member states gobbled up an additional 21 billion cubic meters (bcm) of global LNG supply over the past six months.

Non-Russian pipeline imports over land into the EU, primarily originating from Norway, the UK, North Africa and the Caspian Sea, grew by just 14 bcm in comparison.

“Understand that we’re in the context of very high prices in Europe, and this is what is making us able to attract record levels of LNG in the first half of this year,” the person with knowledge of the plan said on Wednesday.

With colder months approaching, Brussels aims to ensure households do not need to forego on heating during the winter. The industry is expressly warned that it may be affected, however.

Currently benchmark Dutch TTF future contracts for next month delivery are trading for around $46.50 per million British thermal units (MMBtu). Europe’s willingness to dig deeper into its pockets than others around the world will likely buoy prices going forward.

A problem starts to arise however when other countries aren’t willing to be priced out of the market.

Nippon Steel Corp. purchased LNG for delivery in September that represents Japan’s most expensive ever cargo, traders with knowledge of the matter told Bloomberg on Tuesday. The rising cost of fossil fuels has been a key driver of inflation across the world.

Earlier this week, International Energy Agency executive director Fatih Birol urged European leaders “to do all they can right now to prepare for a long, hard winter.”

Facing what it believes is a likely total gas embargo by Russia to weaken support for Ukraine, the EU Commission proposed on Wednesday a bloc-wide reduction in demand of 15% from August through to the end of March.

Initially participation is voluntary and designed to redirect some 45 bcm of incoming supply towards the bloc’s assorted caverns, beefing up EU-wide storage levels towards its 80% target by November 1st from just 64% at present.

If at some point however there is a substantial risk of severe shortage in the gas supply or exceptionally high demand that endangers the target, then a mechanism in the EU treaty can be triggered to make it binding.

“In that case we will request the same 15% is done by all member states on a mandatory basis,” said another EU official briefed on the plans.

The aim is however to never let it get that far. Even those member states like Portugal least exposed to Russian state-owned energy giant Gazprom are deeply connected with the rest of the internal market.

EU officials believe every national government understands it and therefore has a vested economic interest in ensuring cross-border supply chains do not collapse.

This sense of shared destiny is a key lesson the bloc took away from the COVID health crisis, according to EU Commission president Ursula von der Leyen.

Today a dozen EU member states have been hit by a partial or total cut-off of Russian gas, and overall, the flow is now less than one-third of what it used to be.

“Russia is blackmailing us, Russia is using energy as a weapon,” von der Leyen told reporters on Wednesday.

To ensure EU member states unite to face down Russian president Vladimir Putin together, she added, “we have to keep the vivid memory of the pandemic alive.”