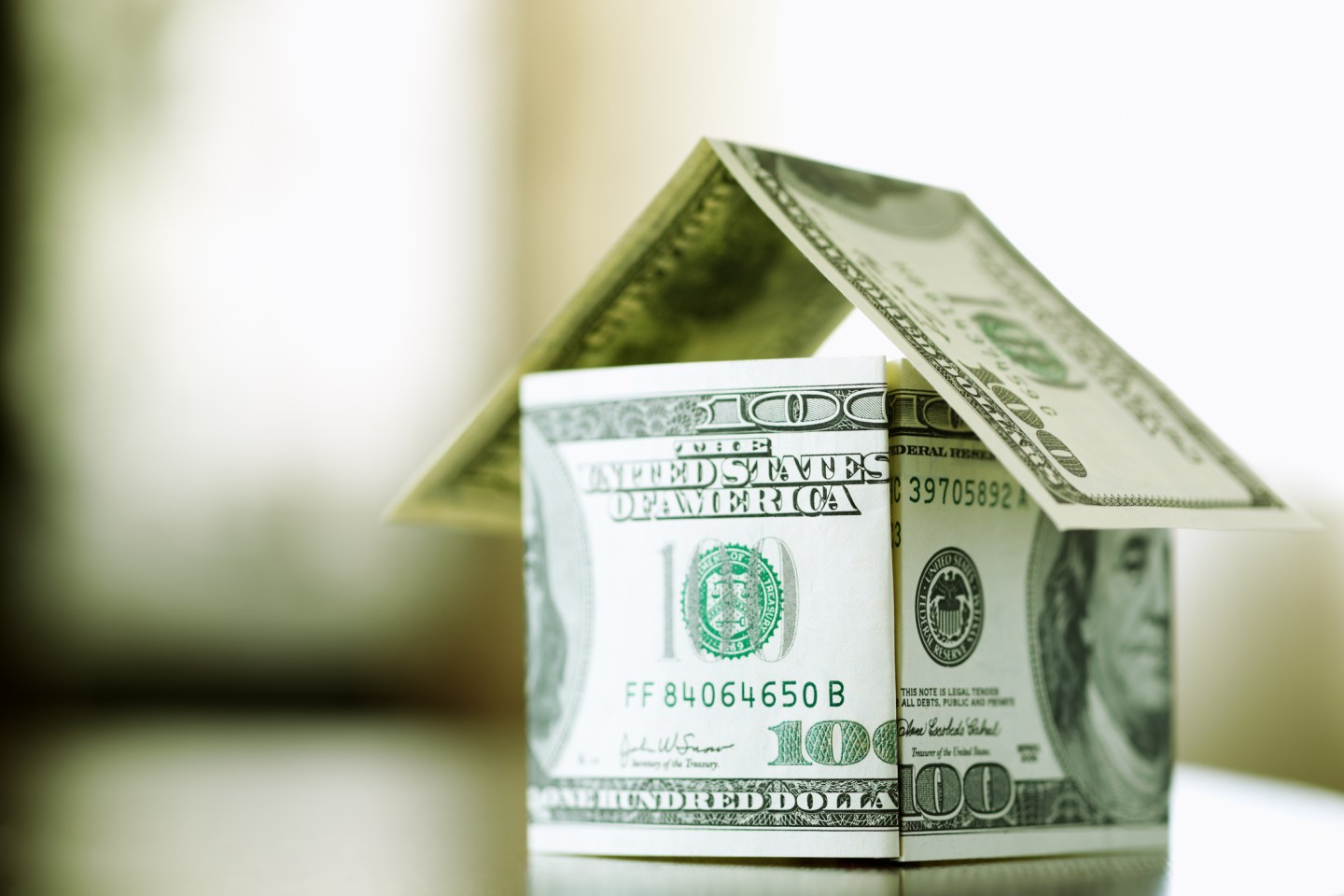 Housing prices could fall substantially from the peak given the new reality for 'real' borrowing costs.
Getty Images

A key but little noticed housing metric is what might be called “the real home borrowing cost.” That number encapsulates potential buyers’ expectations on whether, and by how much, future appreciation will either exceed or lag the current interest rate on 30-year mortgages. “If you can get a loan where you pay far less than the price gains you’re seeing, and predict that will continue, you’d buy houses all day long,” say Mark Zandi, chief economist at Moody’s Analytics. “The lower-rates-than-gains phenomenon was a major force that in driving prices higher and higher during the recent boom.”

Put simply, if you’re confident that your cape or colonial will add value at a bigger number than the rate on your home loan, you’re in sense “making money” on your mortgage. The appreciation is effectively not just offsetting but exceeding your biggest expense as an owner. What a fabulous deal! The problem: This gift of high “negative” borrowing costs exists only in gangbusters markets. The bash ends when some combination of rising rates and perception that prices will flatten or decline reverses the trend so that your monthly nut gets costlier than your hoped-for windfall selling your home 7 or 8 years hence.

Indeed, that scenario’s playing out today. Just a few months ago, rates hit record lows, and homeowners and potential buyers believed the double-digit, year-over-year advances would keep coming. “That’s when borrowing costs got hugely negative. It explains why investors crowded the market,” says Zandi. But suddenly, those once “free” mortgages just turned alarmingly expensive. For Zandi, that switch will soon send prices tumbling in many of America’s hottest markets. (You can read more of Fortune’s analysis on how fast certain markets are cooling here.)

According to Zandi, you arrive at the “real home borrowing costs” by simply subtracting the pace at which potential homeowners and investors believe houses will increase in value from the current mortgage rate. If the expected home price appreciation, or HPA, is higher than the prevailing rate, the borrowing costs are negative, and that’s great for buyers––the more negative, the better. Of course, the “expected” HPA is hard to determine exactly. But when today’s HPA is hot, it’s strong momentum and the conviction that the good times will keep rolling. Those surging animal spirits have a big impact on the actual closing prices, since confidence that the market will stay great leads to more and more buying that spawns ever-higher prices.

It’s instructive to examine the role of real home borrowing costs in past cycles. From the start of 1988 to the close of 2001––just before the bubble started brewing––mortgage rates averaged a lofty 8%. Over those 14 years, the market showed few signs of froth. In fact, HPA over that period was just 81% in total, according to the Case-Shiller home price index, or 4.4% a year. In retrospect, real borrowing costs were positive by 3.6 points, the difference between 8% home loans and 4.4% HPA. In other words, it cost folks a lot more in mortgage payments than they garnered in gains on their houses. That positive spread likely accounts for the relative stability and lack of wild speculation that held prices in check.

Mortgage costs dropped sharply during to the infamous craze that followed. From the beginning of 2002 to late 2006, rates averaged 6% following a big drop at the dawn of the 2000s, lowering payments on new loans by one-quarter from the previous decade. From 2002 to 2006, prices jumped by 59% or 9.6% a year. In a departure from the 1990s, borrowing costs turned deeply negative. Owners were borrowing at 6% and reaping almost 10% gains for five years. Borrowing costs were minus 3.6%, the difference between rates of 6% and gains of 9.6%.

What looked like free financing, however, triggered a price explosion that made homeownership unaffordable for a broad swatch of America, and helped cause the worst housing crash since the Great Depression. It’s a forerunner to what we’re seeing today. The trouble started percolating in the period prior to the liftoff. From the beginning 2013 when housing began its recovery to the end of 2019, mortgage rates averaged 4.2%. But prices fared much better, rising 48% or 5.6% annually. Owners were beating in appreciation what they paid in interest by 1.4 points. That’s not a huge spread. But it shows that credit was cheap enough to spell trouble. Homes were already getting so pricey that under normal conditions, it’s likely that values would have flattened to lure new buyers, if the Fed hadn’t taken emergency action.

In the recent housing boom, borrowing costs went the most hugely negative in history

The Fed’s easy money policies during the pandemic drove mortgage rates from just over 5% in late 2018 to under 3% by the end of 2020. From the start of 2020 to April of this year, they averaged just 3.4%. Over those 28 months, prices leapt at an annual clip of 16.5%. Homeowners were getting almost five times more from price increases than they were paying on their mortgages. Borrowing costs went negative by 13.1 points, the gap between the 3.4% rate and 16.5% HPA. That’s over ten times the number in the 2013 to 2019 period and four times the the negative spread during the takeoff from 2002 to 2006.

Today, real borrowing costs are experiencing what’s likely the biggest reset since World War II. They’re waxing because of large changes in each of the two factors determine the metric. The first is the quick, steep escalation in rates. According to Mortgage News Daily, the benchmark 30-year home loan registered 5.77% on July 14. That’s almost three points higher than the 2.78% posted just over a year ago. The rise effectively doubled monthly payments on the same-size home loan.

The second is the dramatic change in expectations for appreciation. Early this year, the number of asking-price increases each day dwarfed decreases in such raging markets as Phoenix, and Cape Coral and North Port on Florida’s Gulf Coast. Now, mushrooming reductions are far outpacing the tiny number of hikes. In the two weeks from June 25 to July 8, Ed Pinto, director of the American Enterprise Institute’s Housing Center, found that the volume of homes going to contract fell 30% below last year during the same period, and trailed the 2019 numbers by 12%. “Put simply, demand is getting crushed because affordability is so low,” says Zandi.

It’s clear that the yesterday’s faith in big gains ahead has mostly vanished. But how do we establish a forecast for where prices are headed that potential homeowners and investors are likely to adopt, or maybe adopted already? Today’s big inflation can give the incorrect impression that housing will appreciate faster than what you’re paying on that home loan. To be sure, that’s the case right now: The 9.1% rise in the CPI for June beats the mortgage rate by over 3 points. But you’ll keep a home loan for a long time; Fannie Mae and Freddie Mac put the average duration the 30-year at seven to eight years. The bond markets are wagering that inflation drops fast. The Ten-Year Treasury Breakeven rate, based on the yield for TIPs or Treasury Inflation-Protected Securities, stands at just 2.31%––that’s the market’s forecast for average annual inflation over the next decade.

Zandi reckons that over the next eight years or so, U.S. housing overall will appreciate only at the rate of inflation. And once again, the markets are predicting that the general price level will increase at 2.31% a year. In a jiffy, the real home borrowing costs have careened from a negative 13.1 points, to a positive 3.46 points, the difference between the 5.77% mortgage rate and 2.31% expected inflation. “Though the shift is huge, 3.5 points is not a huge spread,” says Zandi. Still, he believes that at current elevated prices, it’s enough to cause a big drop in the markets that have soared most. “In the most juiced metros, I wouldn’t be surprised to see 20% to 25% drops from the peak,” he says. Overall, he expects prices to fall for a couple of years, then enter a catchup phase so that by 2030, say, their total appreciation simply matches the CPI. “I wouldn’t buy now,” he concludes. “You’re getting a combination of high mortgage rates, big prices, and little choice because inventories are so low. The best course is to wait for lower prices and a much wider range of choices.”

Real home borrowing costs have been flashing red for a long time. We’ve just seen an extraordinary period where super-low interest rates converged with rampant price appreciation––in fact, it was the collapse in rates that mainly stoked that craze. But the bigger the negative costs became the harder they had to fall. It’s unlikely to be a soft landing.