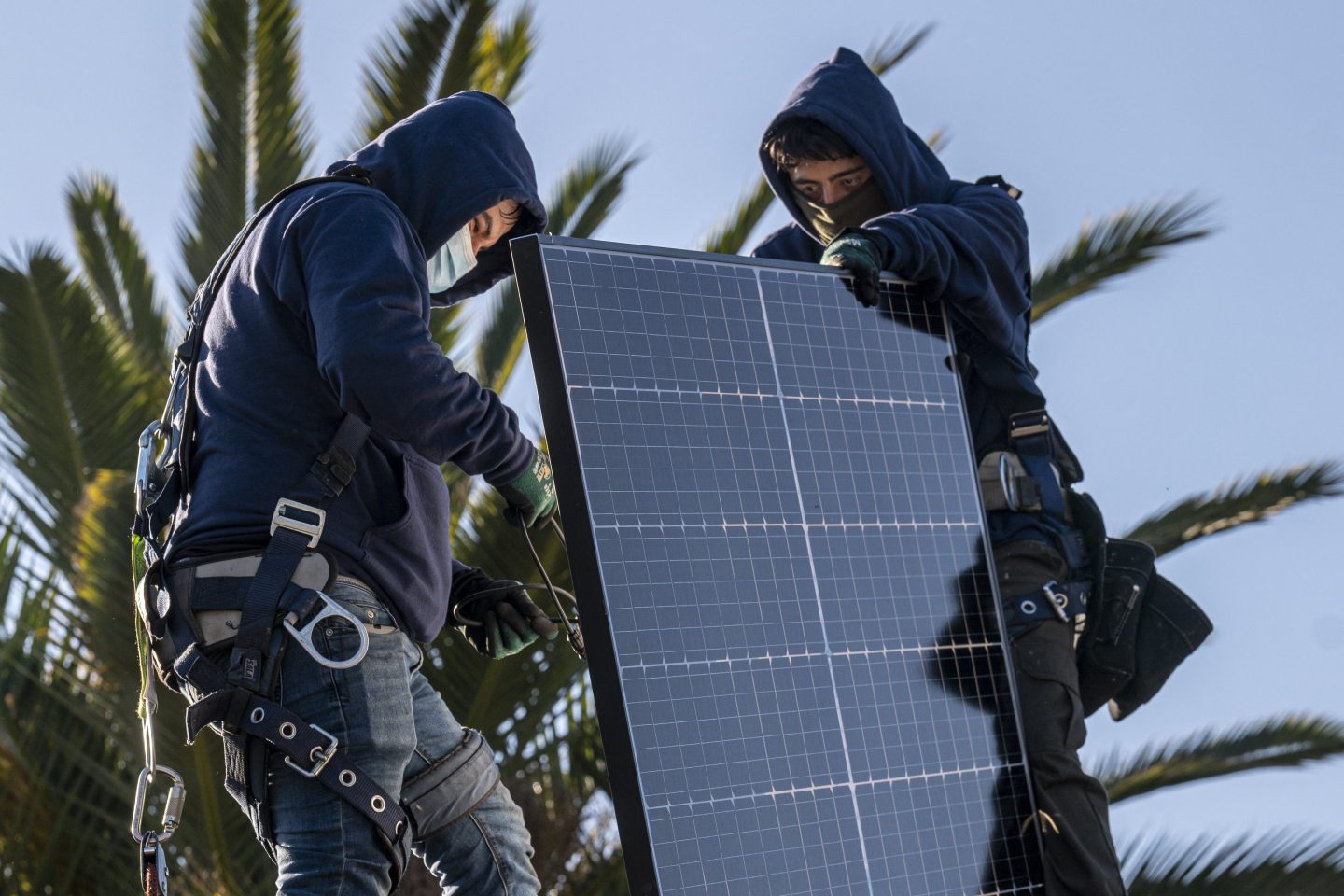 Contractors install Sunrun solar panels on the roof of a home in San Jose in February 2022.
Paul Morris—Bloomberg/Getty Images

Commodity prices have begun to cool lately, even as inflation continues to rage at a 40-year high. But one critical metal is heading in the opposite direction—polysilicon.

The price of the ultra-conductive metal that is crucial to the production of solar panels soared 2.3% on Wednesday to $38.05 per kilogram. Since January 2021, polysilicon prices have jumped more than 190% to their highest level in a decade, according to a Wednesday research note from Solarbe, a Chinese solar industry analysis firm.

As a result, contract prices for solar from large-scale projects are up more than 25% from a year ago, Reuters reported on Thursday.

Solarbe analysts argue that if the polysilicon price hikes continue, it could make major solar projects around the world uneconomical, slowing the pace of clean energy adoption.

“If polysilicon prices continue at a high level, all ground utility-scale projects will be stalled,” they said.

Backing up that claim, Morgan Stanley analysts said in a note last week that the Chinese firm Longi Green Energy Technology, the world’s largest solar developer, believes the industry is nearing a point where price levels no longer make sense for developers of large-scale solar projects, Bloomberg reported this week.

The incredible rise in polysilicon prices began with a surge in demand for solar power in 2021 from both corporations and governments worldwide.

Corporations worldwide also purchased a record 31 gigawatts worth of clean energy through long-term projects in 2021, with two-thirds of the spending going toward solar.

All of that additional demand has led to skyrocketing prices for the raw materials used in solar panel production, including polysilicon. And an explosion at a polysilicon manufacturing plant in Xinjiang, China, in June has only added to the problem.

Over the past decade, solar power has become the cheapest source of green energy worldwide, largely owing to China’s “instrumental” role in the manufacturing of low-cost solar panels, International Energy Agency (IEA) officials said in a recent report.

The only issue is that the world is now almost “completely” dependent on China to supply the base metals used in solar panel production, and the IEA expects that will remain the case through 2025. That could be a problem if solar demand continues, and China’s polysilicon manufacturers aren’t willing or able to sufficiently increase production.

“This level of concentration in any global supply chain would represent a considerable vulnerability, [and] solar PV [photovoltaics] is no exception,” IEA officials said.

The good news is that there should be some relief for the solar industry in August.

Polysilicon is made using metallurgical grade silicon, which is then refined through a chemical purification process called the Siemens process. China’s Silicon Industry Association says the factories that use this process have ramped up production recently to help match rising domestic and Western demand.

The Biden administration also announced last month that it wouldn’t impose any new tariffs on solar-related imports for two years in order to reduce U.S. energy prices. And President Biden authorized the use of the Defense Production Act to help encourage U.S. production of solar panels and counter China’s market dominance.

This reduction in industry costs and increase in solar panel supply should help polysilicon prices come back to earth in the coming years.