Almost everything is getting more expensive, but these 3 things are getting cheaper 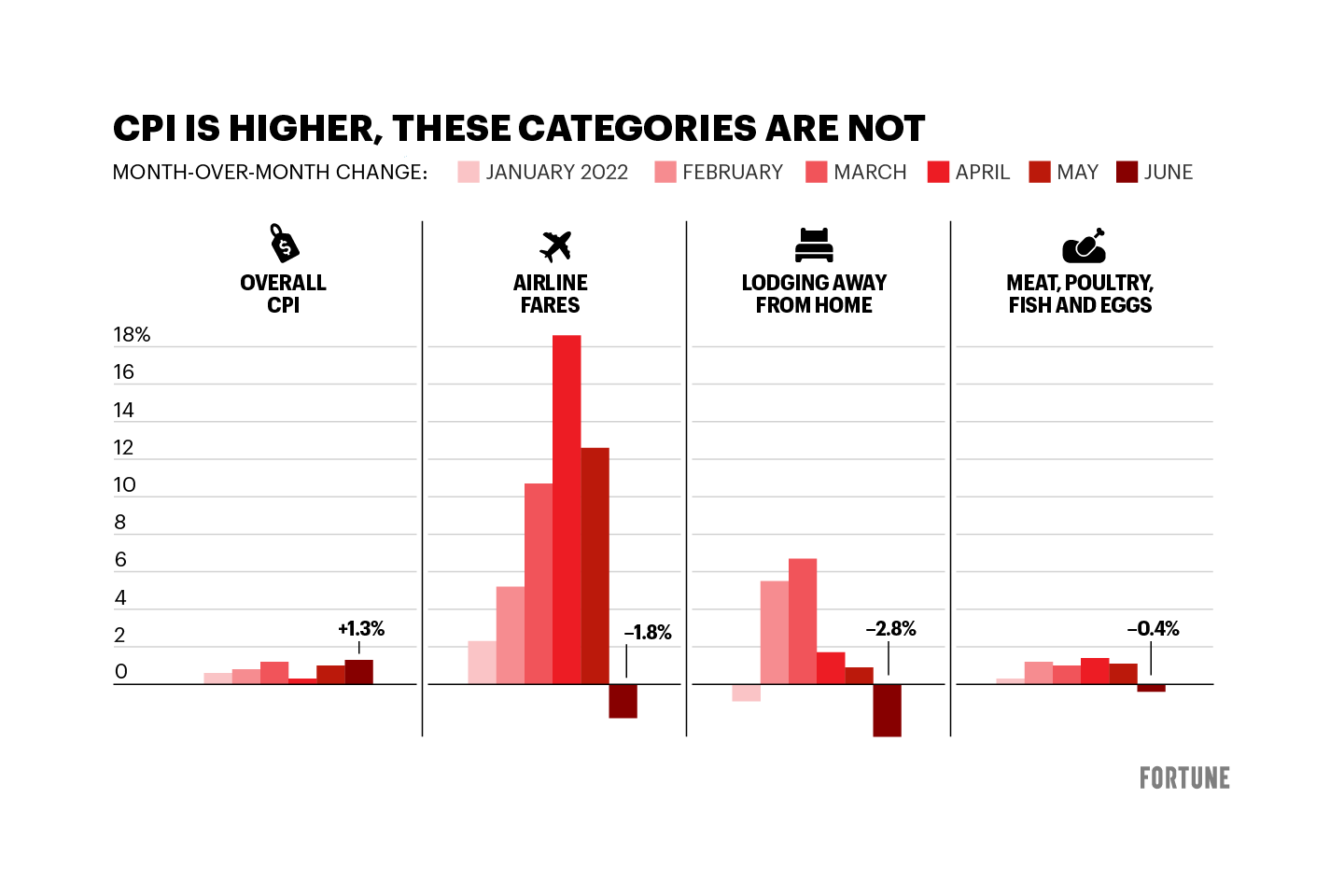 The June U.S. inflation numbers are in, and once again are at a new four-decade high.

The consumer price index is now up 9.1% from last year, the largest gain since 1981 and a jump that exceeded forecasts.

Leading the price jumps in June were soaring costs for gasoline, shelter, and food. Other items that saw significant price increases last month were new motor vehicles (up 0.7% from last month), used cars and trucks (up 1.6%), medical care services (up 0.7%), clothing (up 0.8%), and household furnishings (up 1.2%).

Economists are hoping that the June prices will end up being peak inflation, partly due to July’s falling gasoline prices and shrinking commodity prices like lumber. But buried in this month’s CPI report is that some items appear to already be past their peak, even if they were leading the inflation charts just a few months ago.

Here are three big inflation categories that are starting to see prices fall, according to June’s consumer price index.

Airline fares were one of the few big-ticket items to see prices begin to stabilize last month, after months of double-digit increases.

Air ticket prices were down 1.8% in June compared to May, the first time costs have gone down since October 2021.

The price surge in airfares last spring was largely due to high fuel prices at the time, which have been on a steady decline this summer. There is also a traditional seasonality to airfare prices, which tend to surge in the late spring and early summer, before dropping off by mid- and late summer.

However, even with the price tags for air tickets dropping slightly last month, they are still well above the norm. Prices are still 34% higher than they were in June 2021, and airfares on budget airlines are also up 34% from the summer of 2019, according to a recent analysis by flight booking app Hopper.

Lodging away from home costs fell by 2.8% in June, after months of steady increases. Prices for hotels and motels specifically fell by 3.3%.

Hotel prices fell steeply during the pandemic, as demand for travel plummeted across the nation. But with more people traveling in the U.S. now than at any point in the last two years, demand for hotels rebounded last spring, with month-over-month lodging prices increasing by 6.7% in March.

But while demand for travel has picked up, it has hardly been easy to do so. High gas prices, combined with record delays and cancellations at U.S. airports during critical travel weekends this summer, have turned travel into a headache for many Americans. One recent survey by Bankrate found that 79% of travelers this year ran into at least one problem during their trip, with by far the most popular response being unexpected expenses.

Lodging away from home costs are still up 10% year over year. Major hotel chains, including Marriott, Hilton, and Hyatt, have indicated that they intend to keep room prices high for the foreseeable future.

Food prices were up 1% in June compared to the month before, and a whopping 10.4% year over year, according to the latest CPI report.

But there is one food category that may already be past its inflationary peak: meats, or more specifically, meats, poultry, fish, and eggs.

But the price declines for meat are the only relief consumers will see on the market for food items. Meats, poultry, fish, and eggs were the “only major grocery group” to see prices fall last month, according to the CPI, as food costs continue to rise across the board.

As for the higher prices in other food categories, the war in Ukraine, and the subsequent global shortfall of critical fertilizer products, is a large contributor to the rapid food price increase over the past several months. And even with the drop in prices for meats, poultry, fish, and eggs last month, the category is still 11.7% more expensive than it was in June 2021.