Is Biden or Bezos right about gas prices? Economists weigh in 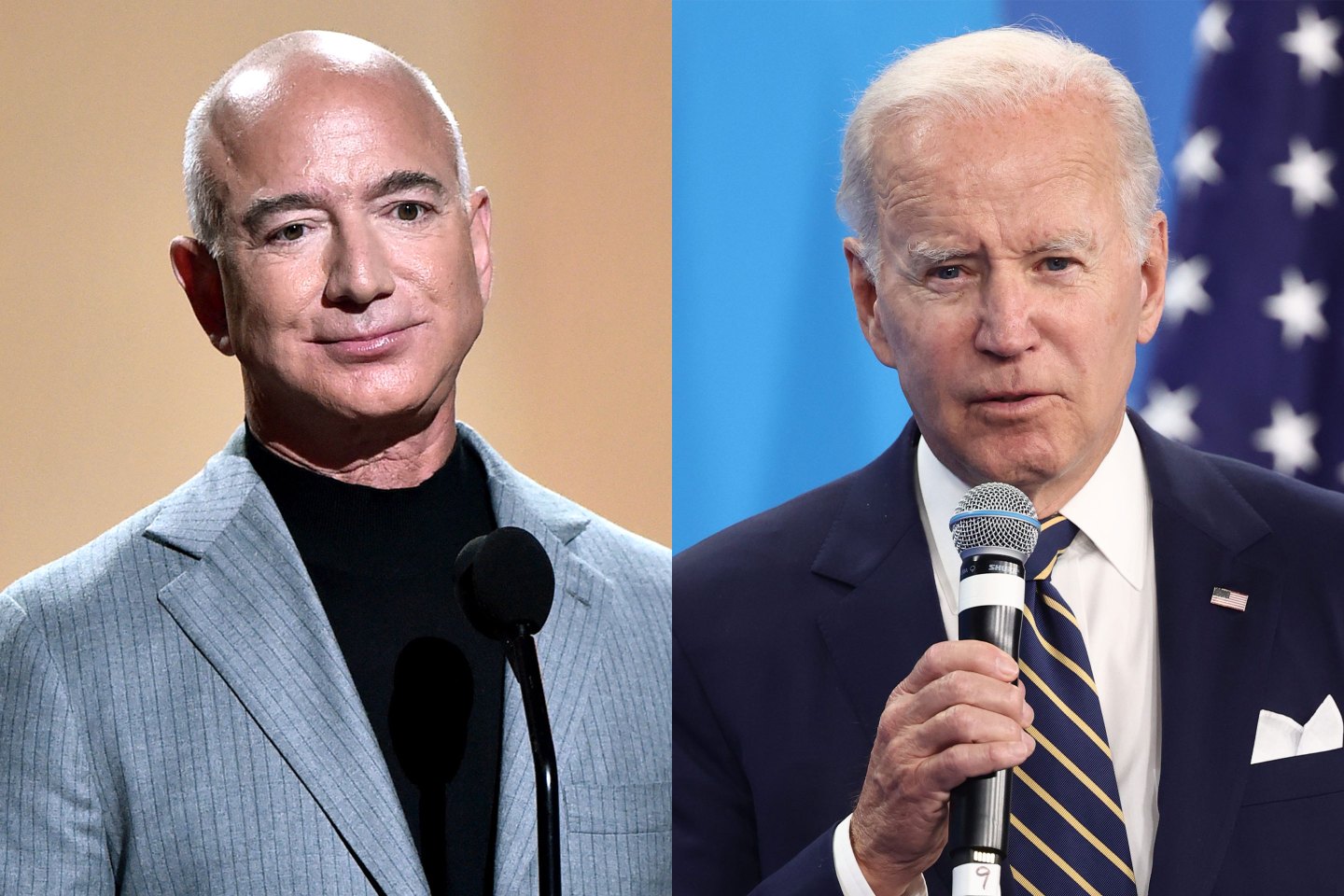 When consumers see prices at the pump hit $5, $6, or even higher, there’s no shortage of finger-pointing. After all, someone has to be blamed for skyrocketing prices. And when prices inch down a bit? There’s always someone to take the credit. The current fracas began last week, when President Biden seemed to wag his finger at those selling gas, tweeting on July 2: “My message to the companies running gas stations and setting prices at the pump is simple: this is a time of war and global peril. Bring down the price you are charging at the pump to reflect the cost you’re paying for the product. And do it now.”

His tweet garnered some immediate feedback, most notably from Jeff Bezos, who waded headlong into the economic debate, tweeting: “Ouch. Inflation is far too important a problem for the White House to keep making statements like this. It’s either straight ahead misdirection or a deep misunderstanding of basic market dynamics.”

That spurred the White House to push back, with press secretary Karine Jean-Pierre tweeting July 3 that while oil prices per barrel have come down, prices at the pump have not kept pace: “Oil prices have dropped by about $15 over the past month, but prices at the pump have barely come down. That’s not ‘basic market dynamics.’ It’s a market that is failing the American consumer.”

Then on July 7, the president’s allies seemed to claim credit for prices inching down a bit. According to Reuters, Biden released more than 5 million barrels of oil from the Strategic Petroleum Reserve in an effort to keep global supply at a stable level. National Economic Council director Brian Deese told Bloomberg Markets that this move “was singlehandedly responsible for keeping oil prices from going higher.”

Some analysts such as Deutsche Bank’s Jim Reid, however, have a different view of why prices are dropping: recession fears, which could cause demand to fall and prices to drop.

What’s not up for debate? Americans are still being hampered by higher-than-normal gas prices, which—according to AAA—are sitting at an average of $4.72, up from the $3.14 average a year go. Of course this has all taken place against a backdrop of record-high inflation, which Americans say is a top area of concern.

But there’s clearly a great divide on why prices were so high to begin with. Fortune spoke to economists to help mediate the debate.

AAA data paints a grim picture of the trajectory of gas prices during Biden’s tenure. Gas prices have doubled from $2.36 when the President took office in January 2021, and the steep increases are top of mind for Americans.

The President has, in the past, linked the issue to supply shortages caused by the war in Ukraine. He caught criticism for saying that Americans would have to tolerate high gas prices for “as long as it takes, so Russia cannot, in fact, defeat Ukraine and move beyond Ukraine.” The onus is on gas companies, according to Biden, to account for trying times by lowering prices at the pump.

But some say that the President is pointing the finger in the wrong direction.

Fortune spoke to Professor John Zhang from the Wharton School of the University of Pennsylvania, who thinks Biden’s criticism is off-base. “Gas stations don’t really make much money out of and in the U.S.,” he said, adding that most stations are mom-and-pop shops. “That’s why Big Oil has gotten out of the business of selling gasoline. Big companies like Walmart and Wawa got into selling gasoline, and then they really squeezed the market.” Zhang adds that most stations make money from selling groceries inside the store.

This is not the first time Bezos has squared off with Biden regarding inflation. When the President urged wealthy corporations to pay “their fair share” to bring down inflation, the Amazon founder tweeted: “Raising corp taxes is fine to discuss. Taming inflation is critical to discuss. Mushing them together is just misdirection.”

This time around, Bezos clearly disagrees with the White House’s position, putting him in the same camp as the US Oil & Gas Association, which took a jab at the President’s remarks, joking in a tweet that “the WH intern who posted this tweet [should register] for Econ 101 for the fall semester.”

Silicon Valley heavyweight Bill Gurley also apparently agreed with Bezos, tweeting: “I totally agree with this. Whatever your politics is, we cannot ignore the past three hundred years of economic research and understanding.” Gurley also implored people to “use the education” they have.

Professor Paolo Pasquariello, from the University of Michigan, echoed that there is more to oil market dynamics than meets the eye. “As I imagine Jeff Bezos thinking about it, gasoline prices depend on the transportation and processing and storage and distribution costs related to transforming sticky oil pumped from faraway fields to the slick liquid we pump in our cars every day. Those costs have continued to increase even as oil prices have recently gone down. Add to this the scarcity of personnel, from tank drivers to gas station operators, and the fact that today’s gasoline comes from oil purchased weeks ago at those previously high prices, and the picture is more complete.”

Pasquariello argued that while Bezos is right in pointing out the complexities of the market, the President “has at least a political responsibility to speak out for his constituents, and even to use the bully pulpit of the presidency and exercise moral suasion when necessary (or politically expedient).”

Professor emeritus Richard Wolff of the University of Massachusetts Amherst took a harsher stance against the Amazon founder and his possible motivations, tweeting: “Bezos scared. If supply less than demand markets raise prices (so too suppliers’ profits). Oil suppliers know, use that. Gov’t could cut prices, take over oil suppliers. Bezos fears same applies to Amazon ‘services.’ So wants to stop discussion.”