A U.K. startup is building the world’s largest algae farm that each year will capture CO2 equal to the emissions of 8,000 cars 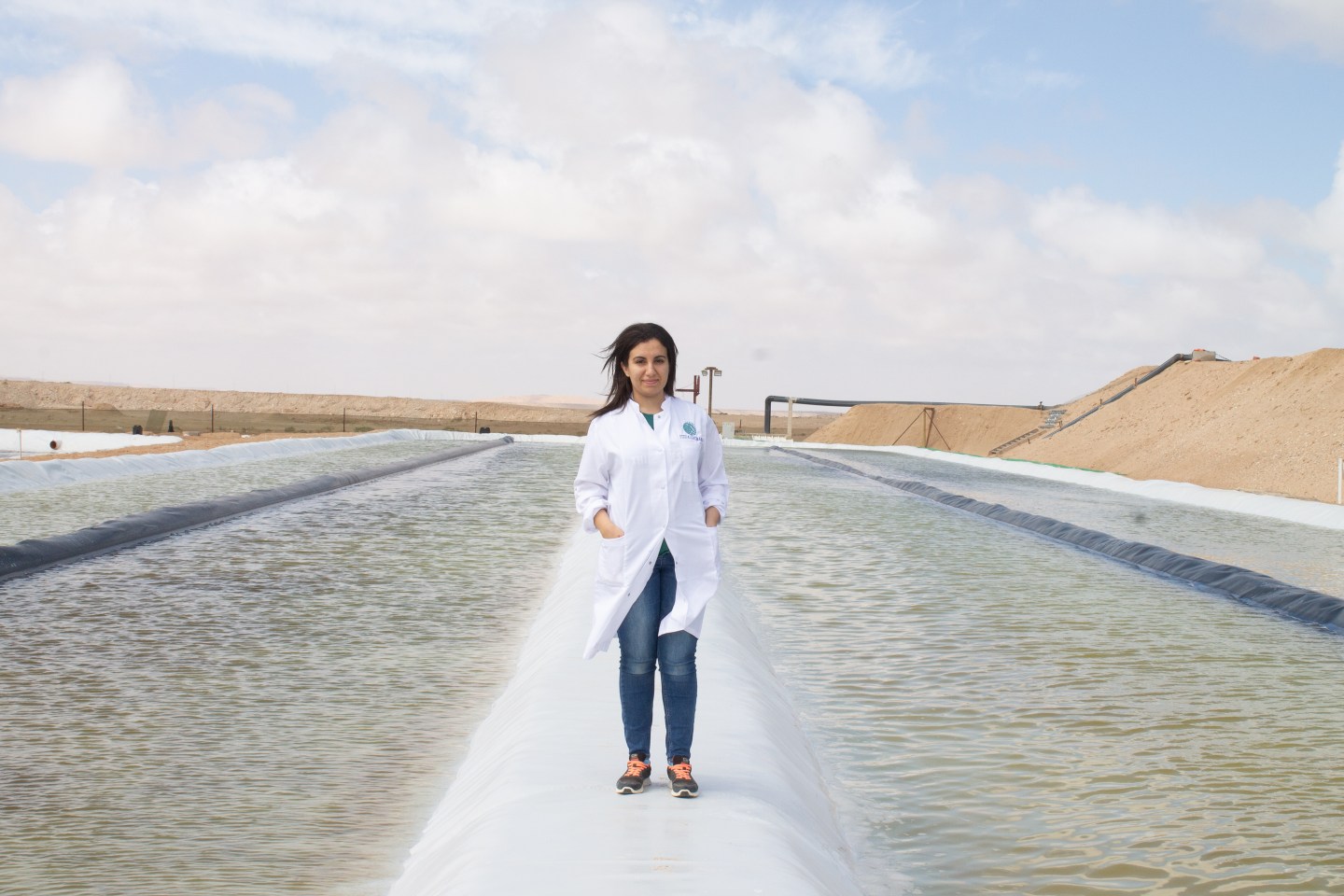 For decades, scientists have been studying the wondrous carbon sequestration powers of marine algae. In short, those nasty-looking blooms of green, red, and brown seaweed floating near shore, and in patches well beyond, do a remarkable job of sucking planet-warming carbon dioxide out of the atmosphere and surrounding water, and storing it safely away in their fibers.

One such scientist at the forefront of this area of marine biology is Raffael Jovine, a molecular biochemist who in 2013 cofounded Brilliant Planet and serves as its chief scientist. The London-based Brilliant Planet is among a small cadre of green-tech startups beginning to unlock the natural powers of marine algae to absorb massive quantities of airborne CO2.

As Jovine tells Fortune, climate change is a massive challenge that can only be addressed with massively big ideas. For a solution to be a true breakthrough, he says, “it’s got to be scalable and big.” Algae, a mass-replicating CO2-removal machine, fits that description.

The stakes are sky-high.

In April, the United Nations’ Intergovernmental Panel on Climate Change delivered yet another warning that we’re falling behind in our efforts to keep the planet from warming to dangerous levels. In that same report, however, climate scientists struck a hopeful, if measured, tone. They singled out a possible game-changing technology that could become a promising tool to help decarbonize the planet: direct-air capture and storage.

Even before the IPCC report, investors were hot on carbon-capture—a catchword for an explosion of technologies and engineering innovations designed to remove CO2 from the atmosphere and lock it away securely, essentially removing the damaging planet-warming gas. Billions in venture-capital investment, government funding, and research grants backed by the likes of Bill Gates and Elon Musk, have flowed into so-called direct-air-capture (DAC) startups over the past few years.

In March, Breakthrough featured the story of one such company, the Swiss-based Climeworks, which engineers giant fans that draw thousands of tons of CO2 out of the sky, and then stores it underground in a layer of rock. Likewise, several major energy companies, including Occidental Petroleum, are working with DAC startups to develop similar plants that suck up CO2.

Brilliant Planet has a different approach to solving the same problem. In large containment ponds, it grows algae, an aquatic plant that may be Mother Nature’s most effective air purifier. According to Brilliant Planet scientists, algae “can absorb and store carbon more efficiently than all terrestrial plants and trees combined. For each metric ton (MT) of algae produced, 1.6 MT of carbon is absorbed.” It also calculates the algae can do the carbon-sequestering job more efficiently and cheaply—using less energy and virtually no fresh water.

In a U.S. patent filed a decade ago, Jovine spelled out his first vision for how a commercial-scale marine-algae processing facility could function.

“I had the slightly insane ambition of wanting to remove a billion tons of CO2,” Jovine recalls. He feels that goal is now within reach.

Jovine says the budding algae carbon sequestration sector can achieve gigaton-scale—or billions of tons of CO2 removal annually—within two decades. In a research note last week, Rystad Energy, an Oslo-based independent energy research firm, backed up that bullish timeline. Rystad calculates that the full suite of carbon-removal technologies—not just algae-based, but direct-air-capture technologies such as those developed by Climeworks—have the capacity to remove 3.6 gigatons of carbon from the atmosphere by 2040. That would indeed be a huge milestone: The IPCC calculates we’ll have to remove five to 10 gigatons of CO2 from the air each year by 2050 “to prevent the world from overheating.”

“We need every solution,” Jovine acknowledges. Still, he feels large-scale algae farming will ultimately prove to be the cheapest and greenest—pun intended—of all carbon-capture options. Brilliant Planet calculates that algae farms like the ones it is building can remove carbon from the atmosphere at a total cost of $100 per tonne. In contrast, Climeworks CEO Cristoph Gebald told Fortune in March that its DAC plant in Iceland, the world’s first in operation, is pulling CO2 out of the sky at between “$200 to $300 per ton.”

If there’s a potential drawback to these kinds of algae operations, it’s finding the hectares of seafront property needed to construct massive algae farming plants. For that reason, Brilliant Planet sees sparsely populated desert coastlines in Africa, the Middle East, and South America as the logical first locations for build-outs.

This spring, Brilliant Planet closed a $12 million funding round, bringing the total raised to $25 million, says CEO Adam Taylor. The latest round was led by Union Square Ventures and Toyota Ventures.

Taylor explained that Brilliant Planet is using the money to build the world’s biggest marine algae farm on 30 hectares of land along a desert coastal stretch of Morocco. The Morocco facility—which will consist of massive retention ponds to grow the algae and a smaller field lab—will go into operation in 2024. By 2026, the Brilliant Planet team expects to achieve commercial scale volumes of production, at which point the algae blooms it grows will suck up to 38,000 tons of CO2 from the atmosphere annually. That’s equivalent to the emissions spewed from about 8,000 cars each year.

“Algae are little machines,” Taylor says. “After hundreds of millions of years of evolution, they’ve gotten really good at taking CO2 out of the air.”

At test sites in South Africa, Oman, and Morocco, Brilliant Planet has, for the past four years, been working the kinks out of its algae farming and storage operation.

The first stage involves pumping seawater uphill to an artificial pool, which is located a few meters offshore. The water eventually flows into a long, shallow “raceway pond”—so named because the pond takes the shape of a raceway oval—where the tiny planktonic algae in the seawater go into action. They absorb the sun’s rays and ambient greenhouse gases, and, through the process of photosynthesis, an algal bloom grows—slowly at first, then accelerating to double in size each day. When the bloom reaches a certain length, it’s skimmed off the surface of the water, and laid flat on the desert floor to dry out. The desiccated strips of algae, rich in absorbed carbon, are then buried a few meters below the surface.

“It’s completely inert,” Jovine explains of the CO2 trapped in the algal strips. “We’re not changing the local ecology” by burying them in the ground nearby. An added bonus of their process: There is no fresh water used, and the company has perfected the system so that the seawater it discharges back into the ocean has fewer impurities, which greatly benefits marine life. “It’s very useful in terms of local ecosystem restoration,” he adds. “It can grow corals; it can [be used for] aquaculture.”

Taylor says the startup’s work is attracting plenty of buzz beyond the scientific community. Businesses, keen to reduce their carbon footprint and meet their net-zero goals, are contacting Brilliant Planet about buying carbon-removal credits from the startup.

“We are getting calls from mining, automotive, finance, insurance, and technology companies,” Taylor rattles off, still astonished by the volume of inquiries from corporate sustainability managers. “We essentially came out of stealth mode after rebranding six months ago…How these companies even found us, I do not know. They are really going to great lengths to find a prospective supply of high-quality [carbon removal] credits.”

Correction: July 5, 2022. This article has been updated to correct the spelling of Brilliant Planet cofounder, Raffael Jovine. It also corrects the anticipated total cost of sequestering carbon at $100 per tonne, and the size, in hectares, of the Morocco plant.