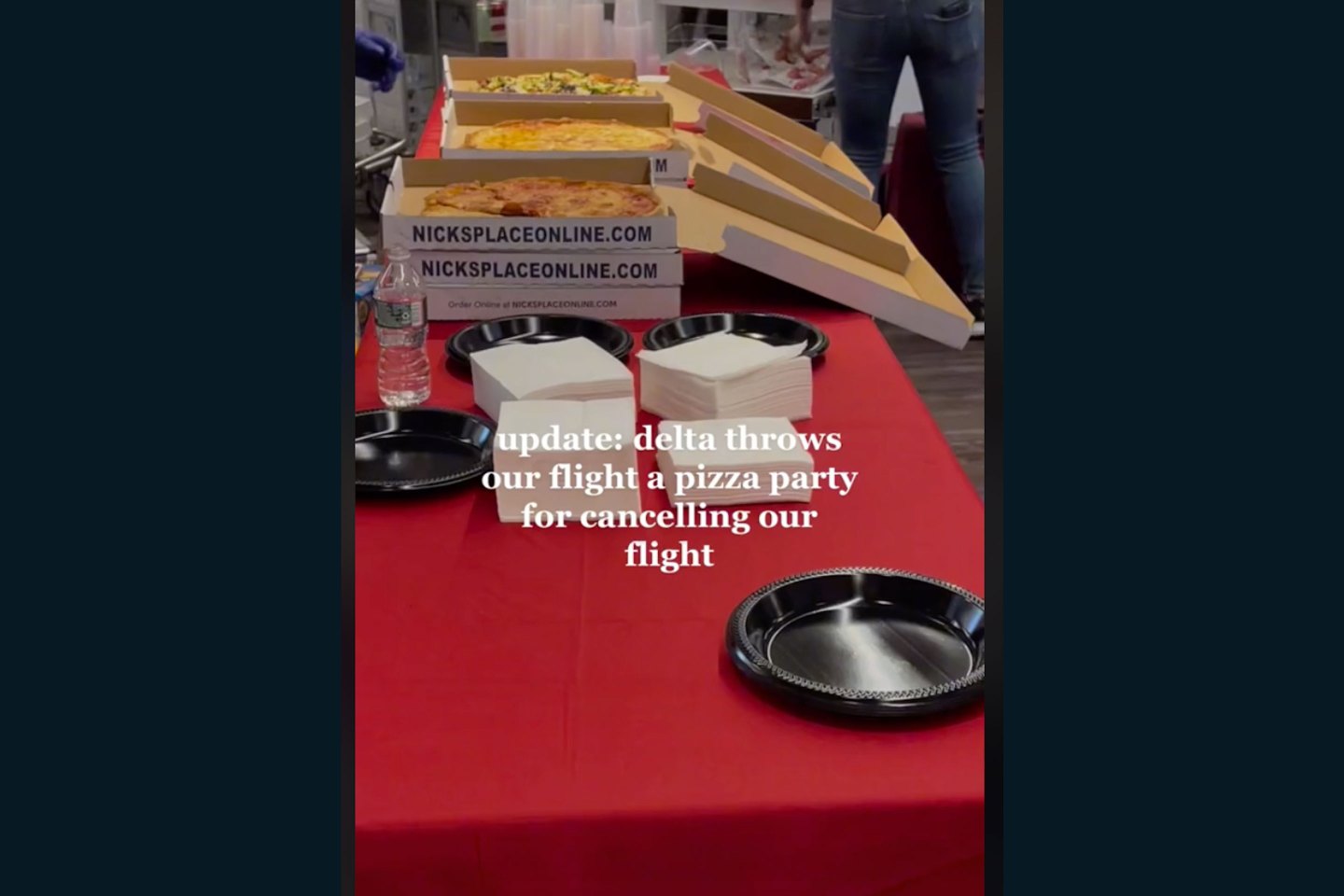 A TikToker faced multiple travel delays and even her plane turning around mid-flight on a summer vacation to Italy. But at least she got a few slices of pizza out of the experience.

Elizabeth Ochoa was headed to Rome on Wednesday, leaving on a Delta Air Lines flight from Boston’s Logan International Airport. Her flight, scheduled to take off that evening, was delayed for over five hours. An hour into the flight, after everyone received their dinner, she told Fortune, the captain came over the intercom and announced the plane had to turn around and head back to Boston due to a gas leak.

Once passengers returned to the gate in Boston, she says, Delta canceled the flight and offered a $6,000 Mastercard gift card to anyone willing to switch to a later one on Friday or Saturday. By that point, Ochoa—who is originally from Detroit and had flown into Logan Airport that morning at 7 a.m.—was facing 12 hours of delay and couldn’t get a refund for her hotel. Still, she decided to turn down the gift card and get the next available flight Thursday.

Her unlucky streak would continue: On Thursday, Ochoa’s new flight was delayed once again, for about an hour and a half. After announcing the delay, the crew told passengers it would be giving them pizza, complete with refreshments and dozens of pies from a local Boston pizza parlor.

On Thursday, Ochoa posted on TikTok about her travel delays and the “pizza party” in a video that has gone viral with close to 1 million views. She captioned it: “why go to rome when you can have pizza.”

Commenters likened the pizza to “employee appreciation lunches,” and “a trick they use to get us to come into the office instead of wfh.”

“I travel internationally very frequently,” Ochoa said. “I have noticed that because of pilot shortages, there have been a lot of cancellations or delays. But this was the first time that I’ve had a pizza party happen.”

Airlines have been struggling with massive delay and cancellation problems this summer as demand for travel heats up following two years of a global pandemic, and companies strain to hire and retain workers. Holiday weekends have been marked by chaos, and there were more than 25,000 flight delays and 2,600 cancellations on Thursday of this week alone, according to FlightAware’s tracking platform.

On Thursday, Delta CEO Ed Bastian apologized to its customers for a “level of disruption and uncertainty” that he deemed “unacceptable,” Bloomberg reported. Ahead of July 4, the airline has offered to change weekend flights at no cost as it’s projected to be a nightmare of flight disruptions much like Memorial Day and Juneteenth.

Earlier this week, Delta Air Lines offered passengers $10,000 each to get off an oversold flight. In 2017, the airline made news for another pizza giveaway with close to 600 pies for stranded passengers.

Delta told Fortune the airport staff distributed the pizza based on their own judgment, not as mandated by specific company procedures.

“While these circumstances are rare, Delta prides itself on a culture of empowering our people to make decisions like these to do the right thing for our customers,” an airline spokesperson said.

“In this case, while working to ensure our customers were reaccommodated to their destinations following an unfortunate disruption to their travels, our airport team made the judgment call to order pizza for the impacted customers during this process,” the spokesperson added. “We applaud them for the gesture while extending apologies to our customers for this delay.”

Ochoa says the pizza seemed to be a crowd pleaser among the hundreds of passengers.

“Everyone really enjoyed it,” she said. “I do think that it was a really nice gesture to have the pizza party and that it wasn’t something that they needed to do.”

Along with the pizza, Ochoa says, Delta refunded everyone’s tickets for the original canceled flight, and later emailed her saying the airline would pay for any accommodations she couldn’t get refunded.

“Delta really did a great job trying to troubleshoot everyone’s destination plans. It was a funny and a super nice way to get the morale a little bit happier on the flight,” Ochoa added. She eventually arrived in Rome, more than a day later than planned.