Young professionals don’t like your ‘anonymous’ workplace surveys. Here’s why they’re sounding off on social media 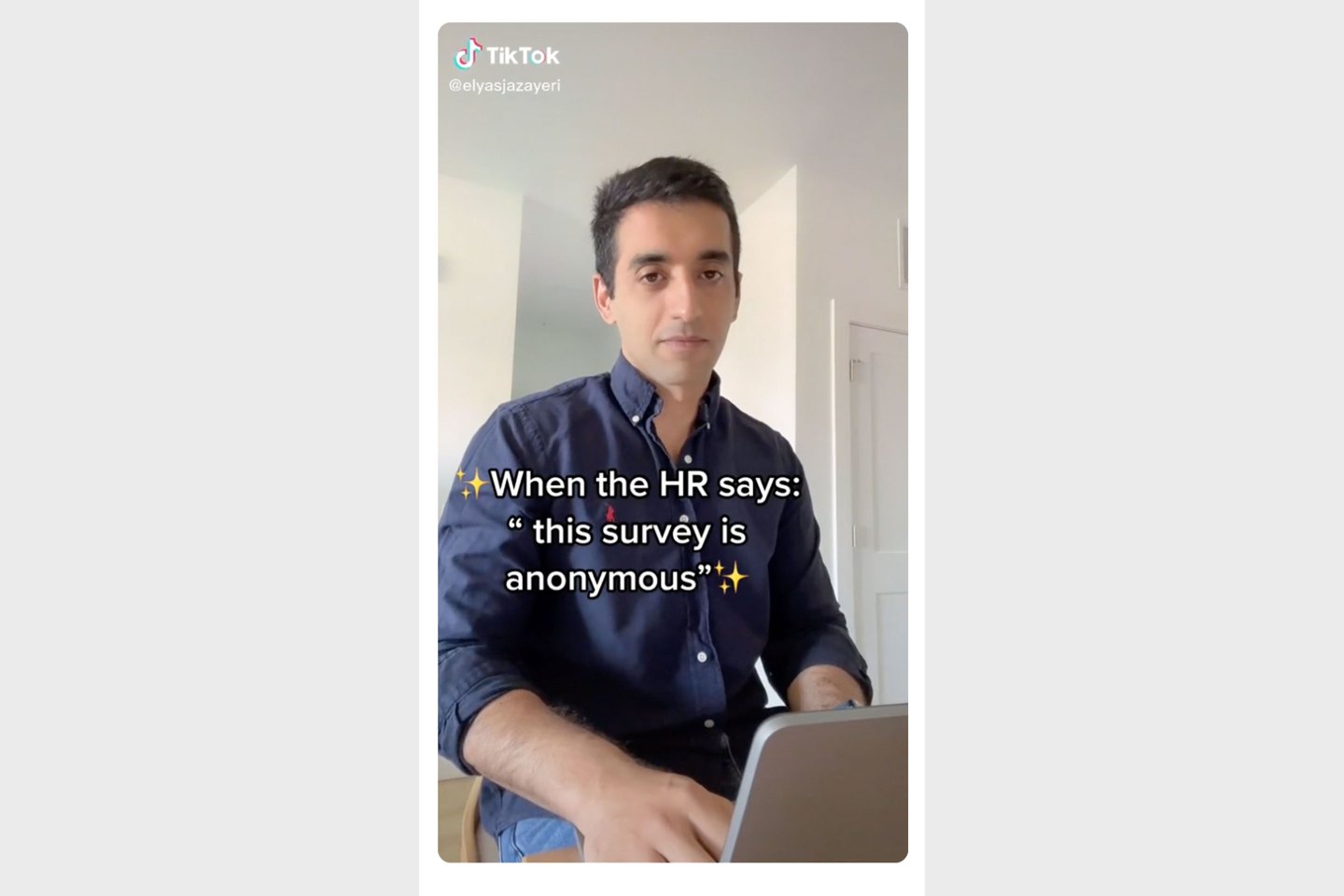 Elyas Jazayeri received hundreds of comments on his TikTok, mostly from workers who have long since decided anonymous surveys are far from anonymous.
Courtesy of Elyas Jazayeri

Considering filling out your company’s anonymous workplace survey? TikTok users have a word of advice for you: Don’t.

Last year, Alex Kim filled one out for his job as a registered pediatric travel nurse. Kim, 24, described his answers as “super critical but professional” in a TikTok video last week.

The day after he sent in his answers, his manager asked for a meeting. Sensing the reason behind it, Kim declined. “I said, ‘um, no thank you, and I thought that was anonymous, by the way,’” he recounted in a follow-up TikTok video, which has over 236,000 views.

He said his manager “flat-out” responded that higher-ups could still identify him and continued to request a meeting for nearly three weeks, which he declined based on the expectation that his answers were confidential. Eventually, he says, he was written up for insubordination. Kim did not respond to Fortune’s request for comment.

Young professionals like Kim have been taking to TikTok to express their frustration over anonymous workplace surveys that don’t actually seem to be anonymous. Earlier this month, Elyas Jazayeri, a 33-year-old project manager at a construction company in Columbus, Ohio, went viral after posting a video poking fun at HR’s attempts to convince workers a survey is anonymous. It’s since racked up over 2.1 million views.

“A lot of HR people commented basically confirming it,” Jazayeri told Fortune on Wednesday. “They said, ‘Yeah, we see all the IP addresses.’ I used to always want to do the surveys because they can make the company better.”

The bevy of responses have changed Jazayeri’s mind. Realizing that “confidential” isn’t the same as “anonymous,” as many commenters pointed out, has turned him off. An immigrant from Iran, he’s worried that managers could identify his responses based on his language and writing style.

If the company culture isn’t accepting or open to honesty, Jazayeri says, he would be much more cautious when filling out a survey and avoid putting too many constructive comments. But that defeats the purpose altogether.

“The whole point is to collect criticism, not necessarily compliments,” he says. “Those could’ve helped the companies a lot.”

Together, Kim’s and Jazayeri’s videos have received hundreds of thousands of comments, mostly from workers in all industries who have long since decided anonymous surveys are far from anonymous.

“I once ‘anonymously’ complained about the cost of parking and bullying and it was brought up in my yearly evaluation,” one user wrote.

While it’s critical to understand how employees are feeling and what they’re looking for out of their job, sowing distrust with a dubiously confidential survey may have the opposite effect. Experts told the Society for Human Resource Management that technology enables most employees to figure out the worker behind the comment and that workers tend to lie on these surveys if they don’t trust the promised anonymity.

But the whole debacle may not be as much of a concern for younger workers as bosses fear—that may be because they know their own power. Hundreds of commenters said they, not believing their managers have their best interests at heart, refuse to fill out the surveys at all. Some, on the other hand, dive all the way in.

“I’m at the point where I know, but don’t care,” one user named Sylvie commented on Kim’s video. “I can get a new job by the end of the week.”