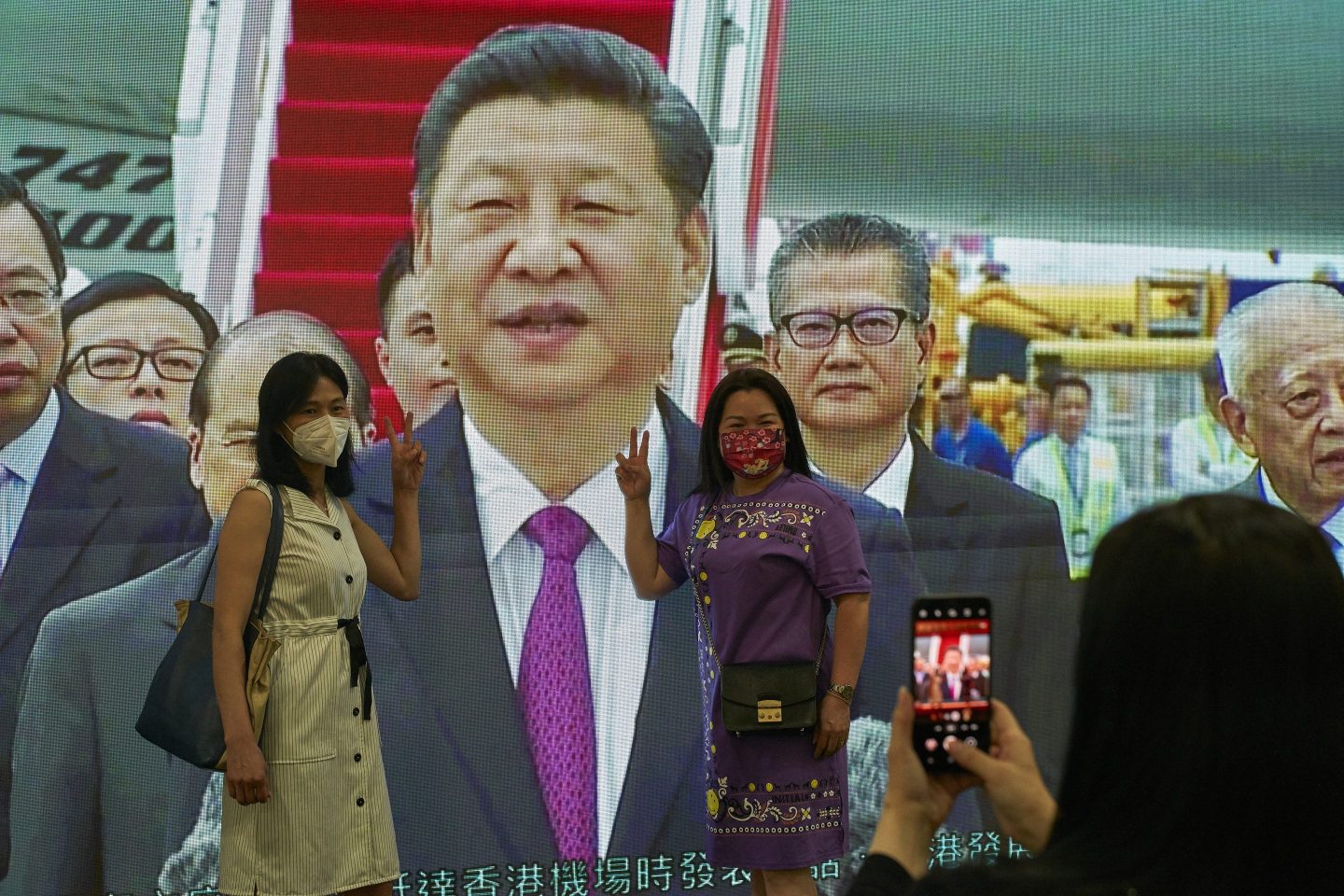 Two women take a photo in front of a poster of Chinese President Xi Jinping at an exhibition celebrating the 25th anniversary of Hong Kong's handover to China. Xi visited Hong Kong to mark the occasion.
Emmanuel Serna—SOPA Images/LightRocket via Getty Images

Chinese President Xi Jinping traveled to Hong Kong under tight security Thursday to oversee the inauguration of the city’s new chief executive and celebrate the 25th anniversary of the former British colony’s return to Chinese rule.

The Chinese leader’s visit was Xi’s first trip outside of China’s mainland since the outbreak of the COVID-19 pandemic in 2020—and only his second appearance in Hong Kong during his 10-year tenure as president.

Xi previously visited Hong Kong in 2017 to mark the 20th anniversary of Hong Kong’s “handover,” from Britain to China, in 1997. He returns now to a city that has been fundamentally transformed, partly by the chaos of the COVID-19 pandemic, but also by Xi’s own efforts to tighten central government control over the once-freewheeling financial enclave, and mounting Western backlash against China’s new assertiveness.

Hong Kong has been hit hard by COVID, suffering the deadliest outbreak of the virus on Chinese soil. The pandemic has shaken Hong Kong’s status as Asia’s leading finance and travel hub, not least because the government of outgoing chief executive Carrie Lam has been obliged to impose strict quarantine rules on all inbound travelers as the price of eventually reopening the city’s border with the Chinese mainland.

But Hong Kong also has been profoundly reshaped by Xi’s forceful response to the huge and sometimes violent anti-government protests that erupted in the city a year before the pandemic. In June 2020, China’s national legislature sought to quell that unrest by enacting a sweeping new National Security Law for Hong Kong that has been used to all but eliminate the city’s pro-democracy opposition. The crackdown has been widely condemned by Western governments, with the U.S. Treasury slapping sanctions on 11 Hong Kong government officials, including Lam and incoming Chief Executive John Lee.

Under terms of a 1984 treaty between Beijing and London that spelled out the conditions for China to resume control of Hong Kong in 1997, the city was designated a “special administrative region” of China and promised a “high degree of autonomy” under a mechanism known as “one country, two systems.” The agreement stated that China’s basic policies regarding Hong Kong “will remain unchanged for 50 years.” At the time, the prevailing view among Western experts and most Hong Kong residents was that over those five decades China would gradually become more liberal and open—more like Hong Kong—as its economy developed and its citizens prospered. But at the midway point of the transition period, many Hong Kong residents believe Xi is remolding Hong Kong in the mainland’s image.

Chinese and Hong Kong flags are affixed to a walkway above New Clearwater Bay road in Choi Wan ahead of Xi’s visit.
Marc Fernandes—NurPhoto via Getty Images

Hong Kong’s South China Morning Post reports that Xi will spend two days in the city and be accompanied by his wife Peng Liyuan. The first couple will travel by high-speed rail Thursday from the mainland tech hub of Shenzhen to the railway’s new terminus in Kowloon, according to the Post. From there, Xi will be whisked by bulletproof limousine across Victoria Harbour to the Hong Kong Exhibition and Convention Centre, where he will meet with pro-Beijing politicians and business tycoons. Later, he will travel to the far north of the city to tour the Hong Kong Science Park. Peng, a renowned Chinese opera soprano, is expected to visit Xiqu Centre, a performance venue established to promote Chinese traditional theater and Cantonese opera.

Notably, though, Xi and Peng will not stay in Hong Kong Thursday evening. According to the Post, they will return by rail to Shenzhen, then Xi will travel back to Hong Kong again Friday morning to preside over a harborside flag-raising ceremony commemorating the anniversary of Hong Kong’s return to Chinese sovereignty and will later attend the swearing-in ceremony for Lee.

Hong Kong has deployed 11,000 police officers—more than a third of the city’s police force—to guard the railway terminus, the route of Xi’s motorcade, and other points of interest. The city has erected water-filled plastic barricades around the convention center near Golden Bauhinia Square where the anniversary ceremony is expected to take place; it will close roads and some public transport facilities, and has imposed a citywide ban on the use of aerial drones.

The city is bracing for a typhoon. On Wednesday, the Hong Kong Observatory said it may consider issuing a No. 3 typhoon warning signal Thursday night as tropical storm Chaba approached from the South China Sea.

But for organizers of Xi’s visit, the biggest worry is COVID. In recent weeks, Hong Kong has experienced a resurgence of the virus with new cases approaching 2,000 per day. Among those recently infected: two senior members of the incoming chief executive’s cabinet.

Authorities are taking every precaution to protect Xi and his entourage from the virus. Guests attending the celebration at the convention center have been required to check into nearby hotels to undergo mandatory quarantine and testing. The Post reports that a group of 50 primary school students who will wave flags to welcome Xi as he arrives in the city has been required to quarantine for three days. A closed-door banquet that was to be hosted Thursday by Lam at the chief executive’s official residence has been canceled over virus concerns, according to Hong Kong’s Sing Tao newspaper, but that the report couldn’t be confirmed.

Minimizing the risk of infection may account for Xi’s decision to return to Shenzhen, where cases are lower and testing rules stricter, rather than spending the night in Hong Kong. China requires ordinary travelers crossing over to the mainland from Hong Kong to undergo one week of hotel quarantine; it’s not clear whether Xi himself will be subject to any COVID restrictions when he crosses back into China on Thursday and Friday.

Hong Kong’s rising case count fueled speculation in Western media that Xi, who has attended diplomatic gatherings by video for the past two years, would give the anniversary celebrations a miss. On the mainland, even a handful of new cases is enough to trigger citywide lockdowns.

But traveling in person to celebrate Hong Kong’s handover anniversary gives Xi an opportunity to project confidence—not only in the city’s future but his own policy decisions—ahead of a crucial Communist Party gathering this fall at which Xi hopes to win an unprecedented third five-year term as leader. The target audience for that show of strength is domestic, not global; the Hong Kong government barred foreign media organizations including Reuters, CNN, Agence France-Press and even Hong Kong’s South China Morning Post from covering the official ceremonies.

In advance of Xi’s arrival buildings and billboards throughout the city have been plastered with red and gold banners celebrating the anniversary. They bear the slogan: “A New Era: Stability. Prosperity. Opportunity.” That toes the party line that the National Security Law has succeeded in restoring social harmony and preventing a minority of noisy malcontents from destroying Hong Kong’s economy.

The reality is more complicated. Lam leaves office with an approval rating of 36%, the lowest of any Hong Kong chief executive. And it is far from clear that her successor, a former career police officer turned security bureaucrat, will fare any better in winning public trust. Lee played a key role in designing Hong Kong’s new security apparatus and has used it aggressively to prosecute citizens on charges of terrorism and succession, shutter newspapers, and punish protestors.

In the two years since the passage of the security legislation, scores of students, activists, lawyers, and journalists—more than a thousand people by one estimate—have been jailed on national security charges. Democratic candidates have been systematically disqualified from Hong Kong’s legislature. Student and trade unions have been disbanded. Human rights groups including Amnesty International and Human Rights Watch have closed their offices in Hong Kong.

Books deemed too politically sensitive are banned from bookstores and public libraries. Parents fume that their children must now participate in flag raising and other patriotic rituals at school. Controversy flared online earlier this month over government efforts to rewrite high school textbooks to suggest that Hong Kong was never ruled by Britain.

The security law, and the government’s perceived mishandling of the COVID crisis, have prompted an exodus of expats and Hong Kong natives alike. Hong Kong saw a net outflow of 157,000 people in the first quarter of the year.

Social distancing policies and restrictions on both mainland and international travel have devastated Hong Kong’s economy. The government recently downgraded its annual economic growth forecast to 1–2%. Private analysts say growth this year will be closer to zero.

Hong Kong’s status as Asia’s leading financial hub is in doubt. New share sales by Chinese firms in Hong Kong this year have fallen to $1.8 billion, the lowest first-half since 2009, and a decline of 93% from the same period last year. Corporate bond sales by mainland companies have slumped to $63 billion, down 39% from last year.

Hong Kong still has many advantages. Taxes are low. The city’s commercial courts are perceived as transparent and fair. Its location makes it a far better gateway to China, the world’s second-largest economy, than potential rivals like Singapore or Tokyo. Hong Kong has a large multilingual middle class; and unlike China’s currency, the renminbi, the Hong Kong dollar is internationally exchangeable and pegged to the U.S. dollar.

Moreover, China’s leaders have pledged that Hong Kong will benefit from the mainland’s Greater Bay Area initiative, which seeks to promote closer integration of Hong Kong, the former Portuguese colony of Macau, and the major cities in adjoining Guangdong province.

In her final weeks, Lam has reduced mandatory hotel quarantine for incoming travelers to seven days, down from two weeks, and declined to impose new lockdowns despite the recent rise in new daily cases. But that won’t be enough to restore Hong Kong’s former status as a global travel hub, especially as the rest of the world is opening up.

Foreign business leaders hope Beijing will allow Lee to loosen the travel restrictions. But the incoming leader has yet to articulate his vision for the city beyond a vague pledge to make its civil service more efficient and “patriotic.”