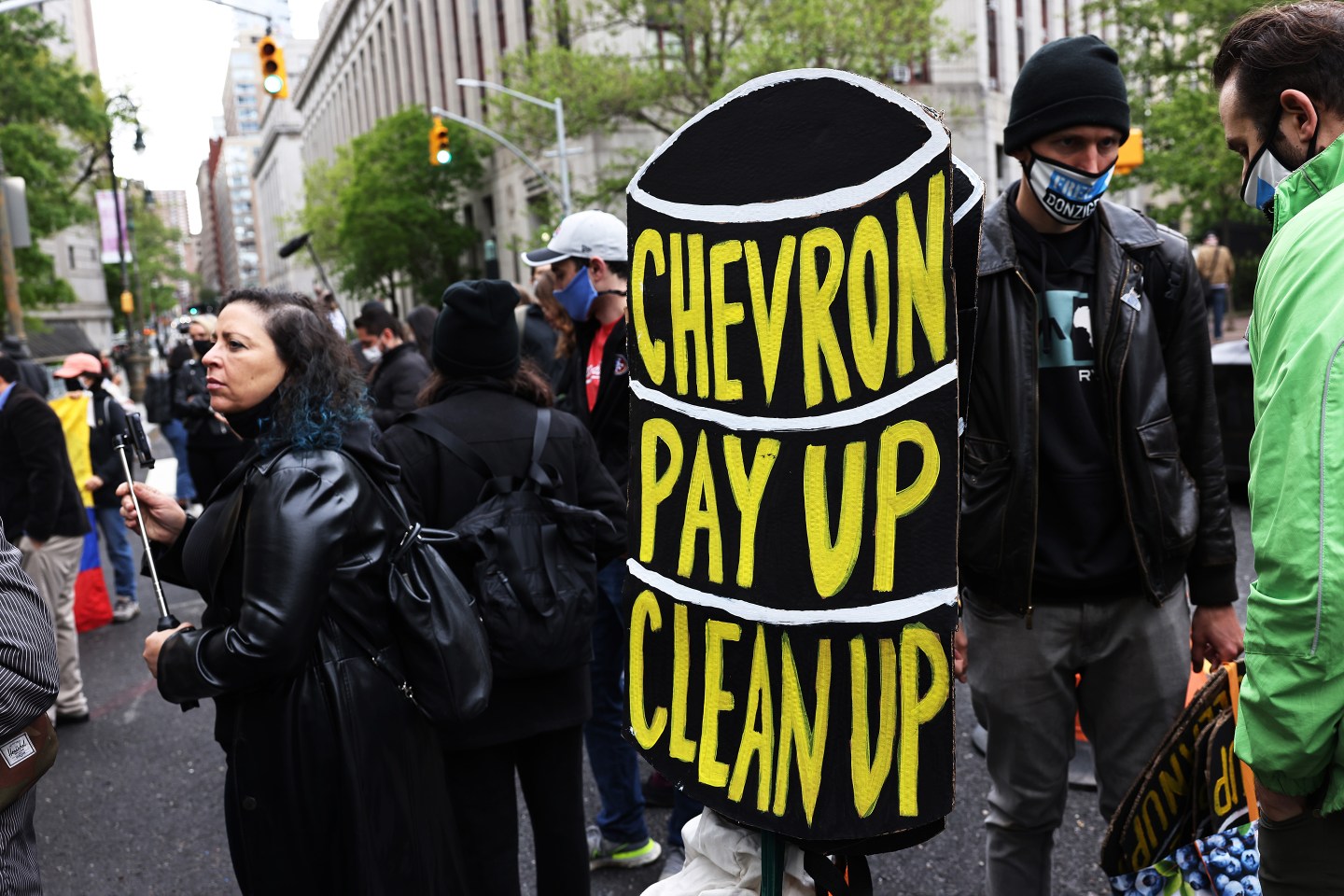 In courtrooms around the United States, climate lawyers are tightening the screws on Big Oil. From California to Colorado, Hawaii, and Rhode Island, no fewer than 20 states are seeking damages against dozens of the world’s largest fossil fuel firms. The argument? That these corporations’ extractive enterprises are responsible for decades of environmental destruction—and, crucially, that they have misled the American people about the true nature of the damage.

Like members of the tobacco and pharmaceutical industries before them, a host of oil and gas giants—including Chevron, ExxonMobil, BP, and Shell—face a tide of litigation designed to address years of alleged malpractice. The cases have been brought by cities, counties, and states across America, as local officials look to hold polluting companies accountable for what they claim is a concerted campaign of climate disinformation.

The defendants deny the charges, and are pushing hard to have the cases heard in federal rather than state courts. State attorneys are fighting this fiercely on the grounds that the oil companies’ use of allegedly deceptive marketing techniques has threatened the health and safety of their residents, whom they have a duty to protect.

Earlier this month, energy corporations being sued by the city of Boulder and by Boulder and San Miguel counties petitioned the Supreme Court to have the case put before a federal judge, arguing that energy policy can only be determined at a national level. Hitting back, Marco Simons, general counsel with EarthRights International, a climate justice group involved in the suit, said that the legal action is about “injuries to Colorado communities” and that the defendants’ alleged responsibility for climate harms “should be determined by a local jury.”

The case and others like it being fought across the U.S. are part of a wider global wave of court action focused on the energy industry’s direct and indirect contribution to climate change. While green litigation has existed for decades—mostly contesting the construction of fossil-fuel-related infrastructure projects—there has been a marked increase in the volume and diversity of climate specific cases in recent years.

According to the Grantham Research Institute on Climate Change and the Environment at the London School of Economics, the number of climate-change-related cases filed globally has more than doubled over the last seven years.

Between 1986 and 2014, nearly 800 lawsuits were fought worldwide. Today, according to the Institute’s most recent figures, shared with Fortune ahead of their publication later this month, more than 2,000 climate-related proceedings have been documented—a quarter of which were brought in the last two years.

Momentum is a major part of this. In May last year, a landmark case saw Dutch judges order Shell to cut its emissions by 45% over the next decade. The ruling marked the first time a company had been legally obligated to align its operations with the Paris Agreement, which seeks to keep global warming “well below” 2° C.

The decision was a watershed moment that has emboldened climate lawyers worldwide, including those arguing for environmental accountability in America. These U.S. litigators, much like their Dutch counterparts, largely represent coastal localities threatened by rising sea levels, or other climate-vulnerable areas. But rather than fighting for alignment with legally binding carbon reduction treaties, the U.S. plaintiffs are focused on seeking restitution for breaches of consumer protection rules.

According to Professor Karen Sokol, a climate liability expert at Loyola University New Orleans, the cases are predicated on the belief that oil and gas corporations have spent decades sowing doubt over the necessity of climate action, using mendacious marketing campaigns to draw attention away from their most environmentally injurious operations.

“The crux of the states and cities’ argument is that oil businesses have deliberately downplayed the scientific consensus that their products are contributing to global warming—something that is threatening the parts of the country where these cases are being brought in terms of flooding, wildfires, drought, and the risk of other extreme weather events,” Sokol says.

Collectively, the lawsuits have reached a jurisdictional inflection point, with a fierce battle raging over where the cases should ultimately be judged. Environmental litigators are focused on the alleged deception of local communities and the close-to-home consequences of climate change, such as the increased risk of wildfires in Boulder, or the threat rising sea levels pose to downtown Honolulu. As a result, they want proceedings to take place at a state level, where consumer protection laws are strongest.

The lawyers representing the fossil fuel firms argue that climate concerns are inherently interstate issues and require federal judgment rather than a patchwork of state-based rulings. Defendants have also claimed that the suits are an effort to sidestep climate inaction in Congress by establishing environmental policy through litigation. Together, these arguments represent an attempt to bring the cases before a federal court, says Sokol, where the defendants believe national emissions and air-quality regulations will nullify the cases against them.

While momentum appears to be with the plaintiffs given a string of recent verdicts pivoting their cases toward state jurisdiction, Big Oil is poised for a fight.

Renewed attempts to force the lawsuits before the Supreme Court are underway, with industry lawyers arguing that a so-called circuit split (when federal appeals courts provide conflicting judgments) has occurred, requiring judicial intervention at the highest level.

Yet even if cases are drawn out over an extended period of time or result in the plaintiffs' defeat, climate campaigners say there’s value in simply having the proceedings take place. Court battles can be a drain on resources, notes Sara Shaw, a climate justice expert at Friends of the Earth International, and when particular carbon-intensive projects are contested, their development is often stalled.

“Courtrooms are also great places for unearthing concealed information about emissions and other climate-related disclosures, while dealing the defending companies a PR blow and letting individuals and communities harmed by their actions air their grievances in a meaningful way,” Shaw notes.

But the foremost goal of green litigation is, of course, to win. In the case of the U.S. lawsuits, victory wouldn’t mirror the emissions reduction edict handed down in the Netherlands, but instead take the form of damages. The states and cities involved are seeking compensation to fund environmental adaptation strategies, like the construction of seawalls, on the belief that the defendants’ claimed misconduct has contributed significantly to the climate risks they face. Some states, such as Minnesota, are also demanding money for climate education campaigns to address decades of alleged disinformation.

These payouts would almost certainly be in the billions of dollars—enough to seriously dent bottom lines and, in the event of multiple fines being levied, undermine the economic stability of even the biggest energy companies. Reaching a precise figure for financial liability won’t be easy, however—despite advances in environmental science, accurately apportioning climate harm is difficult—and there’s always the risk that penalties are simply passed on to consumers in the form of higher prices.

But for environmental advocates, there’s no question that climate litigation is of critical importance to the wider campaign of mitigating climate change.

“Anything we can do to change the economics of energy production and give clean energy alternatives a fair shake is fundamental,” says Martin Wagner, managing attorney of the international program at Earthjustice, a nonprofit environmental law organization that’s been litigating cases since 1971. “Court action alone won’t avert the climate crisis, but in this crucial decade for shifting the dial on global warming, it’s got a big part to play.”