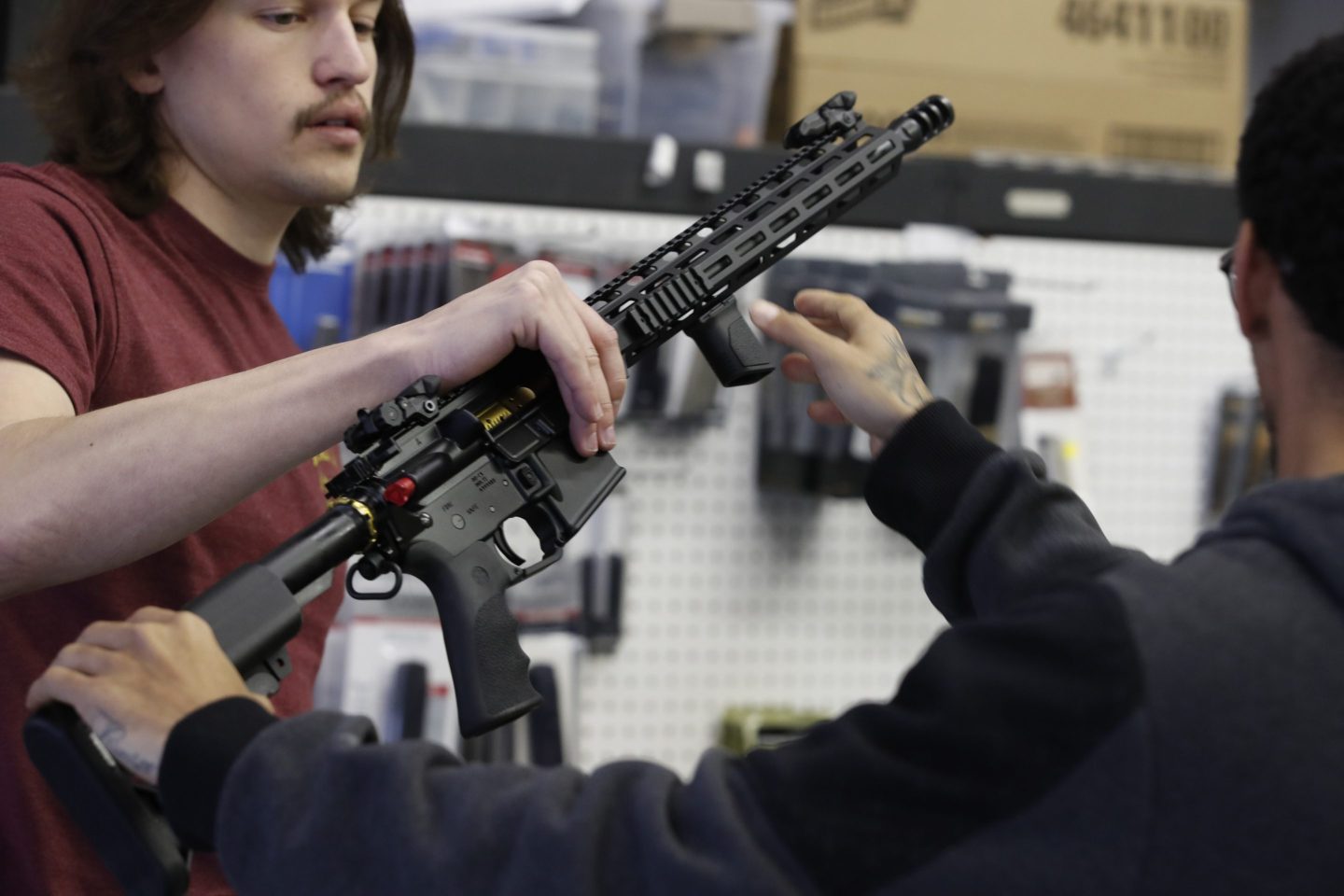 Decades of advertising have convinced two-thirds of Americans that owning a gun makes them safer—but this claim is demonstrably false.
George Frey—Bloomberg/Getty Images

For decades, the gun industry, in its eagerness to increase sales, has systematically and cynically exploited Americans’ fear and anxiety by representing that owning a gun makes you safer. This claim is demonstrably false—and gun manufacturers know it. Allowing it to persist just adds to the ever-increasing body count. Owning a gun makes you less safe. Study after study proves it.

It is long past time to stop the gun industry’s calculated disinformation campaign and to hold gun manufacturers accountable for their false, deceptive, and illegal advertising. However, the Federal Trade Commission (FTC), the body charged with protecting the American public from false advertising, has refused to do its job to keep Americans safe.

The FTC’s Bureau of Consumer Protection has a clear mandate: to protect consumers from “unfair or deceptive” practices in the marketplace. But when it comes to the gun industry, the FTC has turned a blind eye, failing consumers, failing our democracy, and failing the millions of Americans who have lost their lives or their loved ones to gun violence.

Twenty-five years ago, the Brady Center first asked the FTC to investigate the gun industry’s false and deceptive advertising. In mid-2020, Brady and Everytown Law filed another petition with the FTC that described how Smith & Wesson brands its consumer guns as “Military and Law Enforcement” weapons and otherwise targets paramilitary civilian groups using the “halo effect.” Brady and Everytown Law submitted a follow-up letter to the FTC in August 2021.

Last month, Brady, Giffords Law Center to Prevent Gun Violence, and March For Our Lives, in partnership with the Firearms Accountability Counsel Taskforce (FACT) Coalition, filed a petition outlining the industry’s false and deceptive advertising claims that gun ownership is a safe way for Americans to protect their homes and families. For decades now, gun violence prevention organizations have laid out—in painstaking detail—the false and deceptive trade practices of the gun industry while pleading with the FTC to do its job and act.

Despite these repeated warnings over the past 25 years, the FTC has continued to sit on the sidelines. Emboldened by the lack of oversight by the FTC and near immunity provided by Congress under the Protection of Lawful Commerce in Arms Act, gun makers have made a calculated marketing decision to lie to Americans and represent that they need guns in their homes and on their persons to protect themselves and their families. This strategy has enabled the gun industry to increase sales even as millions of Americans have moved away from hunting and sport shooting.

One 2020 study that analyzed ads in Guns magazine from 1955 to 2019 found a clear “shift in the core emphasis of U.S. gun culture.” Earlier ads promoted guns primarily for “hunting and recreational shooting,” while more recent ads relentlessly focused on the purported need for “armed self-defense.”

And it works. When Brady filed its 1997 petition, data suggests that the American people understood—correctly—that owning a gun or having a gun at home actually puts people at greater risk. Now, after being saturated with decades of dangerously deceptive advertising practices, more than two-thirds of all Americans believe that having a gun in their home makes them and their loved ones safer.

If that was true, gun violence should have decreased as gun ownership increased in recent decades. The reality shows just the opposite: Over the last two decades, gun deaths have skyrocketed. Horrifyingly, guns are the number one cause of death for American middle schoolers and high schoolers. All told, more than 120 Americans were killed by a gun on an average day in 2020—the year that saw the most gun deaths ever recorded by the Centers for Disease Control and Prevention. That same year, a new record was set for background checks—a proxy for gun sales—every month.

Far from making gun owners safer, it’s much more likely that a gun brought into the home to protect one’s family will be used in an unintentional shooting, domestic violence, or suicide. For decades, studies have confirmed as much:  A 2013 study established that the risk of homicide is three times higher for people living in homes with a gun. Another found that the risk of suicide is up to five times higher for people living in a home with a gun and up to nine times higher if the gun is stored loaded.

These are just the dangers to those in the home. But as we know, young men frequently take these weapons from the home to go commit heinous crimes elsewhere.

As the industry’s deceptive ads reach a larger—and younger—audience through social media, it’s America’s children who are the most vulnerable to the gun industry’s misleading messaging. To date, the gun makers have shown no qualms about “[starting] them young” by directly targeting children.

A particularly egregious example is Wee1 Tactical’s JR-15 rifle which was developed specifically for children to use. So while industries selling products such as alcohol, tobacco, and even lottery tickets routinely place age restrictions on content, the gun industry and the FTC do no such thing.

Sadly, the consequences are all too tragic and predictable. Daniel Defense has a long history of advertising that expressly promotes anti-social and violent behavior while appealing to young people, including through images and messaging that reference popular video games and movies aimed at teenagers.

The New York Times has reported that Salvador Ramos—the gunman in Uvalde, Texas and reportedly a “Call of Duty” enthusiast—purchased the assault rifle used in the deadly shooting directly from Daniel Defense less than a week after turning 18.

To keep Americans safe, the FTC has a responsibility–especially toward young Americans–to review and to stop the gun industry’s false and deceptive advertising practices, just as the FTC has done across other industries, from tobacco to e-cigarettes and cannabidiol (CBD). In each case, the FTC launched an investigation into the challenged advertising practices. And in each case, these investigations led to significant regulations ensuring that ads accurately characterized the risks of their products.

Predictably, there will be pushback from the gun industry. There always is. Already, we’ve seen gunmakers embrace the First Amendment to challenge investigations into their advertising practices. When New Jersey Attorney General Gurbir Grewal subpoenaed Smith & Wesson for its advertising materials, the gun manufacturer argued that the AG was trying to “suppress and punish” its “lawful speech.”

But this isn’t about free speech–it’s about ending deceptive advertising and saving lives. No industry should be immune from scrutiny and accountability–least of all the gun industry. On behalf of the American families and communities who have lost loved ones to–and live in fear of–gun violence, the FTC must do the right thing and fulfill its mandate to protect the American people.