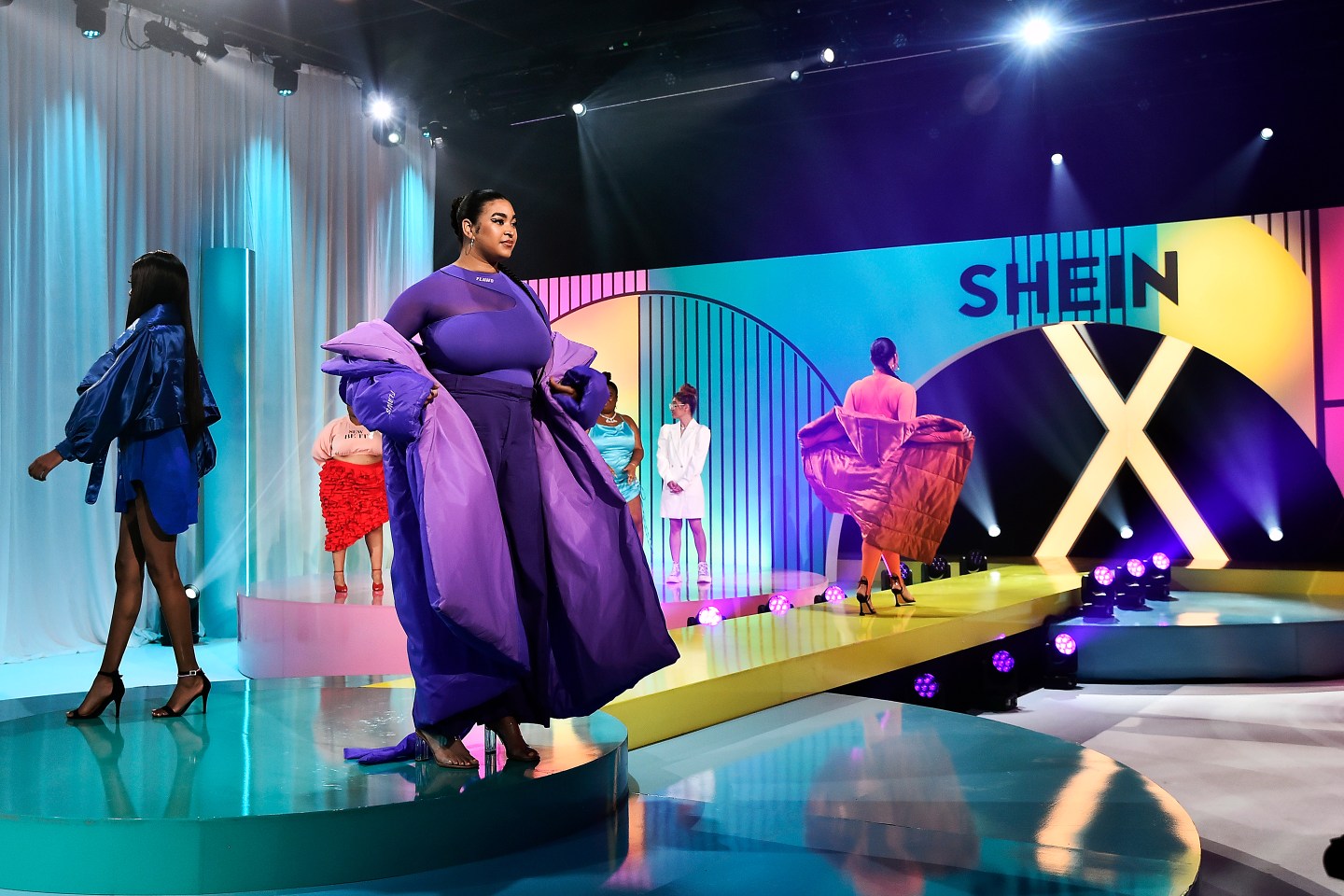 Models show off looks at a Shein-sponsored design competition in 2021.
Stefanie Keenan—Getty Images for SHEIN

TikTok FASHION vlogger LuCinia Tomas has netted nearly 106,000 subscribers with short videos documenting her affordable outfits. Her video views surged after she began posting a series of clips comparing near-identical clothing from two fashion retailers, Zara and Shein. In her most popular video, which has racked up 9.4 million views, she models two seemingly indistinguishable green-and-black patterned dresses—one from Zara that costs $79, and another from Shein, priced at $15.

Many of Tomas’s viewers commented that they saw no differences between the dresses, with one asking: “Are these the same dresses, just with an insane markup at Zara?” Another said: “Shein all the way. I won’t be wearing the dress every day.”

In recent months, the hashtags #zaravsshein and #zaradupes have gone viral on social media platforms—attracting nearly 40 million views each on TikTok. The trend has also inspired several stand-alone Instagram accounts, like @zara.vs.shein, which has over 47,000 followers.

In previous generations, “fast fashion” retailers like Zara and H&M attracted the ire of fashion houses and environmentalists by hawking runway styles for prices so low the clothes are essentially disposable, easily cast off when the next hot trend comes along—ones nobody would wear every day. Now Shein, a 12-year-old online retailer based in Nanjing, China, is giving fast-fashion titans a taste of their own medicine, using real-time data, social buzz, and an extensive network of factories to produce look-alike designs at an even faster pace and for even lower prices. While Gen Zers may claim to be climate-conscious consumers, Shein’s booming business and those #zaradupes videos prove that consumers born after 1997—the bulk of Shein’s customers—include many who want clothes that are even cheaper and more immediate than what previous generations bought. Indeed, the Chinese brand’s rapid growth and loyal user base have inspired upstarts to replicate Shein’s version of faster fashion—a phenomenon reshaping the retail industry.

Global investors, for whom it is increasingly fashionable to champion high standards on environmental, social, and governance (ESG) matters, are similarly smitten. They have pumped Shein’s valuation up to $100 billion, making it the world’s third most valuable startup behind ByteDance, the Chinese parent of TikTok, and Elon Musk’s SpaceX. Shein is now worth more than H&M and Inditex, Zara’s parent company, combined, according to Bloomberg.

But while Shein’s innovative business model might lower prices for consumers, watchdogs grumble that Shein has built its clothing empire on the back of cheap labor, knockoff goods, and A.I.-driven design software that encourages consumers to ditch old outfits at rates that are bad for the planet. Those complaints, along with a recent e-commerce slowdown, make the company’s continued dominance far from certain.

WHEN SHEIN FOUNDER and CEO Chris Xu—a former search engine optimization specialist and entrepreneur who once sold wedding dresses online—launched Shein more than a decade ago, he was entering a crowded fast-fashion market. But Xu thought his company could differentiate itself by offering a wider range of inexpensive clothes, sourced from a large network of Chinese suppliers, that could go from concept to virtual sales rack in even less time.

Shein has undercut fast-fashion stalwarts by building its site around small-batch orders based on a test-and-repeat model, says Erin Schmidt, senior analyst at retail-focused advisory Coresight Research. Shein produces only 100 pieces of a new item at once, compared with Zara, which starts by testing 500 pieces of each new design, according to consumer research firm Euromonitor. Limiting the size of new orders lets Shein gauge consumer preferences without a large upfront investment. If real-time sales data shows customers like an item, Shein will order more. Shein tests new products in this manner hundreds of times a day. It adds 6,000 new items to its site every 24 hours. By refreshing thousands of products daily, Shein has trained customers to visit its platform regularly or risk missing out on the latest designs, Schmidt says.

Filling orders at Xiaoyi, a company in Nancun, China, that is one of Shein’s more than 6,000 suppliers.
Qilai Shen—Panos Pictures/Redux

Shein also minimizes design time, which gives the retailer a speed advantage. Competitors like Zara and H&M mimic high-fashion runway trends, which can take weeks to re-create. Shein’s in-house software—a visual search engine based on deep learning artificial intelligence, in which a computer learns to perform tasks like object recognition—is the “secret sauce” that has allowed it to outpace competitors, says Terri Sage, chief technology officer at retail analytics firm 1010data. Shein uses the most advanced neural network technology, which “may have the ability to recognize an item in a tenth or less of a second,” Sage says, creating a “superior visual object recognition system” that’s quicker and far more efficient than those of its rivals. The software searches in real time for trending fashions across social platforms like TikTok, recognizing items from both still shots and video and matching them to inventory. Shein then feeds the data, alongside simple designs, to its vast network of factories. Shein’s 6,000 Chinese suppliers need no more than 10 days to manufacture and ship a new item, compared with the four to six weeks required by British competitor Boohoo.

As those #zaravsshein videos suggest, Shein is often capitalizing on trends that may have originated with a competitor, and some critics have accused the site of purveying knockoffs. In a statement to Fortune, a spokesperson said that Shein “respects designers, artists, and the intellectual property rights of others. Shein suppliers are required to comply with a code of conduct … [and] when noncompliance is found, [the company] takes immediate action.”

Zara didn’t respond to Fortune’s request for comment, but Carol Spieckerman, president of retail advisory firm Spieckerman Retail, says that Zara and other rivals have little incentive to take legal action, given how quickly fashion cycles turn. Independent designers and artists also have accused Shein of stealing their work, but lack the legal resources to take the retailer on. U.S. copyright law offers few protections for fashion designs. “There’s not much [a company or person] can do, and certainly not when the violator is an offshore player like Shein,” says Sucharita Kodali, principal research analyst at consultancy Forrester. Thus, Shein faces few consequences when it sells a checkered zip-up wallet reminiscent of Louis Vuitton’s Damier “checkerboard” design for $3.12 (the original version costs $505).

THE COVID-19 pandemic was Shein’s big break. With no physical stores and a wide network of factories in China, Shein was better positioned than rivals to serve customers who suddenly turned to digital stores for nearly all their needs. Downloads of Shein’s app surged to 193 million last year, up from 67 million in 2019, making it the second most downloaded shopping app worldwide, according to data provider Apptopia.

Shein’s social media prowess was also tailor-made for a stay-at-home era. The company has built an army of digital influencers—from small-scale social media personalities to celebrities like Khloé Kardashian—who promote Shein’s products on their channels in exchange for a fee or free goods. During the pandemic, Shein hosted virtual and in-person concerts featuring musicians and models popular with Gen Z, like its May 2020 show with Doja Cat and Lil Nas X. Shein now boasts 4.1 million followers on TikTok, compared with Zara’s 1.3 million, 1.2 million for American retailer ASOS, and H&M’s 155,000.

Shein, which mails products from China directly to its consumers, has also benefited from the Sino-U.S. trade war. Beijing scrapped export taxes for companies that ship direct to consumers in 2018, in response to new U.S. tariffs on Chinese goods. Shein also capitalizes on a U.S. tariff exemption on postal packages valued at $800 or less.

Shein’s revenue reached $10 billion in 2020—a 250% increase from the year prior. But last year, as people began going out more often, Shein’s sales growth slowed to 60%, with revenue reaching $16 billion, according to a recent Bloomberg report. Investment bank Morgan Stanley has predicted that Shein’s revenue will hit $20 billion this year.

Shein’s booming business has drawn criticism from environmentalists and worker rights advocates. Good on You, a nonprofit group that rates fashion brands based on their ESG actions, says Shein’s scores on sustainability and labor ethics are “very poor.” The brand uses “few eco-friendly materials … [and] there is no evidence it has taken meaningful action to reduce or eliminate hazardous chemicals … or emissions in its supply chain,” Good on You says.

Shein’s sustainability and social impact report outlines ESG goals, though it fails to specify actions or timelines to achieve them. For instance, Shein says it will “incorporat[e] more recycled materials” into its products and packaging.

On the labor front, critics say Shein’s accelerated turnaround times put undue pressure on suppliers to fill orders promptly. That has led to “excessive overtime” and unsafe working conditions in suppliers’ factories, according to a 2021 report from Swiss advocacy group Public Eye.

And starting June 21, Shein will have a new supplier-related headache to contend with as the U.S. begins to prohibit the import of any goods made with Xinjiang cotton, owing to forced-labor concerns. It’s an onerous ban that even retailers with mature and diverse supply chains will struggle to abide by. Because Shein’s supply chains are almost entirely located in China, the company almost certainly sources cotton from Xinjiang, which produces 85% of Chinese cotton.

Regarding these matters, Shein cites its “strict supplier Code of Conduct, which includes stringent health and safety policies … and policies against forced labor in our supply chain. [We] work with third-party organizations around the world to trace our raw materials.”

Criticism over labor and sustainability hasn’t deterred investors. In April, Shein reached a $100 billion valuation after a funding round reportedly worth $1 billion to $2 billion that included investments from private equity firm General Atlantic and venture capital giants Sequoia Capital China and Tiger Global Management, according to multiple media reports.

Spieckerman says she gets Shein’s investor appeal: The firm has built a high-volume, online-only business, and Gen Z’s demand for the brand indicates healthy long-term growth. Shein’s A.I.-driven manufacturing model, she adds, is a “powerful competitive advantage” the company can apply to other markets and goods.

Spieckerman cautions, however, that because Shein is a private firm and doesn’t disclose financial results, outsiders can only guess at its true value. “We have no idea whether Shein is actually profitable or whether its margins are sustainable,” she says.

Those doubts don’t seem to have deterred investor or consumer enthusiasm. Reuters reports that Shein is planning an initial public offering, though a Shein spokesperson says the company has no “immediate” plans to go public.

In fact, Shein is so successful that a slew of copycats are already springing up in its wake. The future of fashion could be faster, cheaper, and more disposable than before.

This article appears in the June/July 2022 issue of Fortune with the headline, “Fast fashion, made even faster”