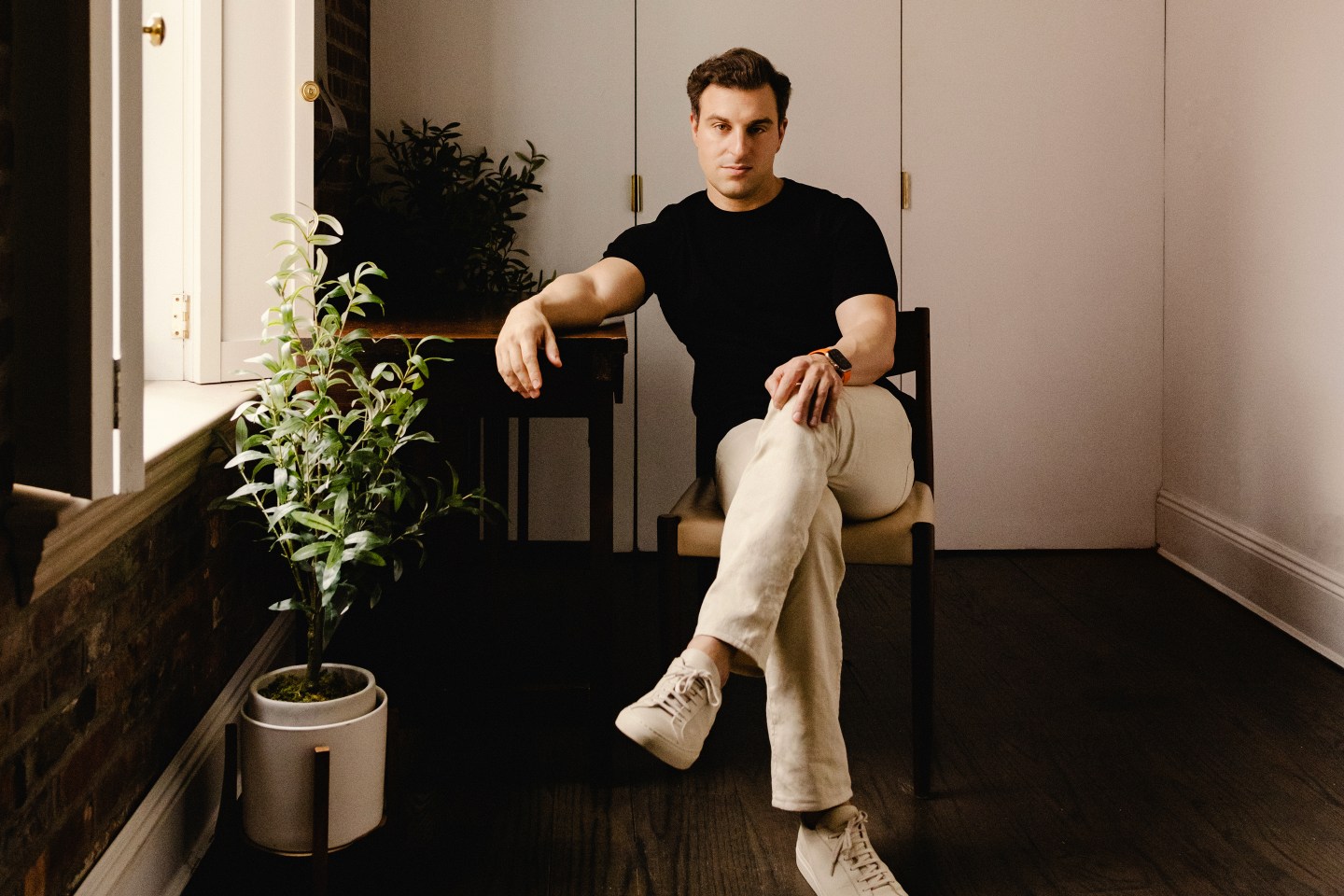 Brian Chesky, 40, doesn’t have your usual tech founder CV: He’s a proud grad of the Rhode Island School of Design.
Photograph by Grace Rivera for Fortune

When COVID-19 hit, Airbnb’s business plunged 80% in two months. Today, the rise of remote work and a resurgent travel market have pushed bookings and revenue above pre-pandemic levels. Through it all, Chesky has leaned into big moves, including the recent announcement of one of the industry’s most liberal “work from anywhere” policies. We caught up with the CEO at his latest Airbnb to talk about where the company goes from here.

This edited Q&A has been condensed for space and clarity.

Man on the move

You’re actually living in Airbnbs full-time right now. What has that experience been like?

Chesky: I started living on Airbnb in January. I’ve lived in about a dozen places: Atlanta, Nashville, Charleston, Miami, Boston, Chicago, a couple of places in Colorado, Vancouver. Right now I’m in New York. [I stay at each] a little under a week. Moving can be difficult, but I’ve just embraced it. I pack pretty light. It’s really just [golden retriever puppy] Sophie; she’s my primary accessory.

There are two things I’ve learned. One, you can run a company the size of Airbnb from a laptop in a stranger’s house. That helped inspire our policy to allow employees to live and work anywhere in the world. If I can do it, then why can’t other people do it? The other thing I noticed is that the longer you’re away, the more you want to be in a home with amenities and the comfort of your office or your house. When you’re living and working on Airbnb, it isn’t just a place to sleep.

I heard you recently stayed in some kind of princess cottage?

Yeah, a fairy-tale princess cottage. There’s an impulsive side of me, I just find Airbnbs and I book them.

I saw the words “princess cottage,” and I thought it was cool. I should have spent more time reading! Because I got to the house and it was all pink inside. And there wasn’t a shower, there was just a bathtub—a small bathtub for a small princess. But it captures the possibilities on Airbnb. Here’s this little cottage that this woman decked out with a theme. And it became a destination for people, which I think is pretty special.

You mentioned the new “live and work anywhere” policy. It’s gotten attention, not just because of the flexibility, but also because you’ve said you’re not going to adjust salaries based on where workers live, in contrast to some other big tech players.¹ Talk about that decision.

I’ll be super honest about this. I wasn’t expecting a big reaction; it got way more attention than I expected. Since we made the announcement, more than 1 million people have visited our jobs page. I’ve had tons of other CEOs reach out to me saying, “Hey, we’re thinking about doing this.” I never predicted that our design would have an influence on the world. I think we just struck a chord.

I don’t think hybrid, asking people to come back to work in the office three days a week, actually provides a ton more flexibility than the old world. And I felt like location-based pay would eventually be an outdated practice. We’re just getting in front of the curve. And listen, if people can live on Airbnb, if I live in San Francisco and I want to go to Maine for three months, am I going to lower your pay because Maine may have a lower cost of living? It would be kind of weird. If people live on Airbnb like I do, are you going to give them a different paycheck every couple of weeks? So it started feeling like location-based pay presumes that people are completely rooted in one city, and I felt like that was going to become a slightly anachronistic way to think about things.

By the way, there was another reason: We’re all competing for the same talent. And so if Tech Company A lowers your pay and we don’t, then you are going to come work for us. That’s where the rubber hits the road.

Airbnb just reported strong Q1 results,² but in the early days of the pandemic, you looked to be in deep trouble.³ How did that crisis change the company?

By necessity, we switched to being a functional organization. We had about 10 divisions before the pandemic. We were overextended. We couldn’t do everything—and we wouldn’t have the money to do it all. There were people who were predicting our demise, articles asking if this was the end of Airbnb. So I looked at companies like Apple and what they did when people were predicting that they were going to go out of business—like Apple in the late ’90s. Steve [Jobs, the late founder and CEO of Apple] basically took a divisional company and turned it into a functional organization. He took about 80 business SKUs and got it down to four. He made everything really simple. And we decided to simplify our business and go back to the basics, back to our roots, really out of necessity.⁴

But as we did it, we realized it was actually easier to run a company this way. I wanted the whole company rowing in one direction. The best way to do that is to create an alignment mechanism; ours is a calendar. Most companies do this with metrics, but a creative company doesn’t try to hit numbers. A creative company has a calendar, it has deadlines.

So now we have two big releases each year, one in May and one in November. It really helps allow people to be distributed, because when people can roam around the world and live in any country they want, as long as everything’s on a calendar, everything’s coordinated.

You recently overhauled the ways you can search on Airbnb. What’s the rationale behind the shift?

From a business standpoint, the most important thing we can do is not just add more hosts, but also point demand where we have the most available hosts. There are Airbnbs in 100,000 towns and cities, and most people can only think of 20 to 30 places that they type into a search box. So we thought, What if we organize homes by things people are passionate about, like skiing or golfing or tree houses?

Before the pandemic, people were not really interested in traveling in a completely different way. Business travel still dominated, and people were just habituated. The pandemic started breaking people’s habits. Everyone had to reevaluate their lives, including how to travel. We realized that once habits were changed, people were going to be more flexible.

Give it away now

You signed the Giving Pledge in 2016.⁵ What’s your approach to philanthropy?

One of the things I want to do is help kids that are just like me. I was the son of two social workers, basically middle-class. I didn’t dream of becoming a tech founder because I didn’t know any tech founders. I had never even heard of a tech founder. So I think I can help others realize their potential, show them the great big world—maybe expose them through the power of education scholarships and travel.⁶ These are things that you could say are actively in my mind. But over the course of the next 50 years of my life, or however long I live, I’m sure there are going to be other issues that I grow passionate about.

Earlier this year, Airbnb pledged to provide free temporary housing for up to 100,000 Ukrainian refugees. How did you make that happen?

I think it was in October 2012, when Superstorm Sandy hit New York, that the first [Airbnb host] opened their home to a person who had been displaced. Over the course of the last decade, we’ve housed more than 100,000 people in need of housing for free. A number of years ago, we started housing refugees too. When the Afghanistan crisis broke out last year, we had about 100,000 people leaving Afghanistan come to the U.S. We decided to try to house a fifth of them. So we said, We’re going to house 20,000 people, and we did.

[With Ukraine], we wanted to push ourselves … a big goal and an audacious number. So we announced 100,000, and we mobilized. We’re a really nimble culture: We make a decision and the entire company turns very, very quickly. You saw how fast we responded to the crisis in 2020; you saw how we were able to go public, on Zoom, during a pandemic. You saw how we have reinvented the product repeatedly. And you saw how we can respond to crises like Ukraine.

That war, along with concerns over inflation and cratering tech stocks, has many concerned about our overall economic direction. What do you see on the horizon for Airbnb?

We’re pretty resilient to whatever happens in the economy. In a good economy, people have more money to travel. In a bad economy, people want to save money when they travel, and people want to make extra money in their homes. My evidence of this is, how come we were the travel company that recovered fastest during the pandemic? Faster than hotels, faster than airlines, and faster than online travel companies. We are the most adaptable business model in all of travel by far. We have nearly every type of space at nearly every price point for nearly every type of person in nearly every geography in the world. We’re not just short term, we’re also long term.⁷ So however the world changes, we’ll be able to adapt.

(1) Comp conundrum: At Google, which recently asked most of its employees to return to the office three days a week, pay adjustments have become a major sticking point with workers. (See our story: “Inside Google’s push to nail hybrid work and bring its 165,000-person workforce back to the office part-time.”)

(3) Surviving the pandemic: When COVID-19 hit, Airbnb was forced to delay a much-hyped IPO. Chesky also laid off about a quarter of his workforce, and raised $2 billion in equity and debt financing to get through the crisis. The company eventually went public in December 2020.

(4) New and improved: Despite its push to simplify, Airbnb has launched 150 new features and product upgrades in the past 12 months. The latest update includes “split stays,” which lets users book two back-to-back stays, and AirCover for guests—liability insurance, which in the past was available only to hosts.

(5) Bye-bye, billions: By signing, Chesky, who has a net worth estimated at $8.9 billion, pledges to give the majority of his wealth to charitable causes. His fellow cofounders, Joe Gebbia and Nathan Blecharczyk, have made the same promise.

(6) Road scholar: Chesky is partnering with the Obamas on a new scholarship that includes a stipend and free Airbnb housing for students pursuing a summer work-travel experience.

(7) Permanent vacation: Long-term stays, which Airbnb defines as bookings of 28 days or longer, doubled from the first quarter of 2019 to this year. The category is the company’s fastest-growing.

This article appears in the June/July 2022 issue of Fortune with the headline, “The Conversation: Brian Chesky”