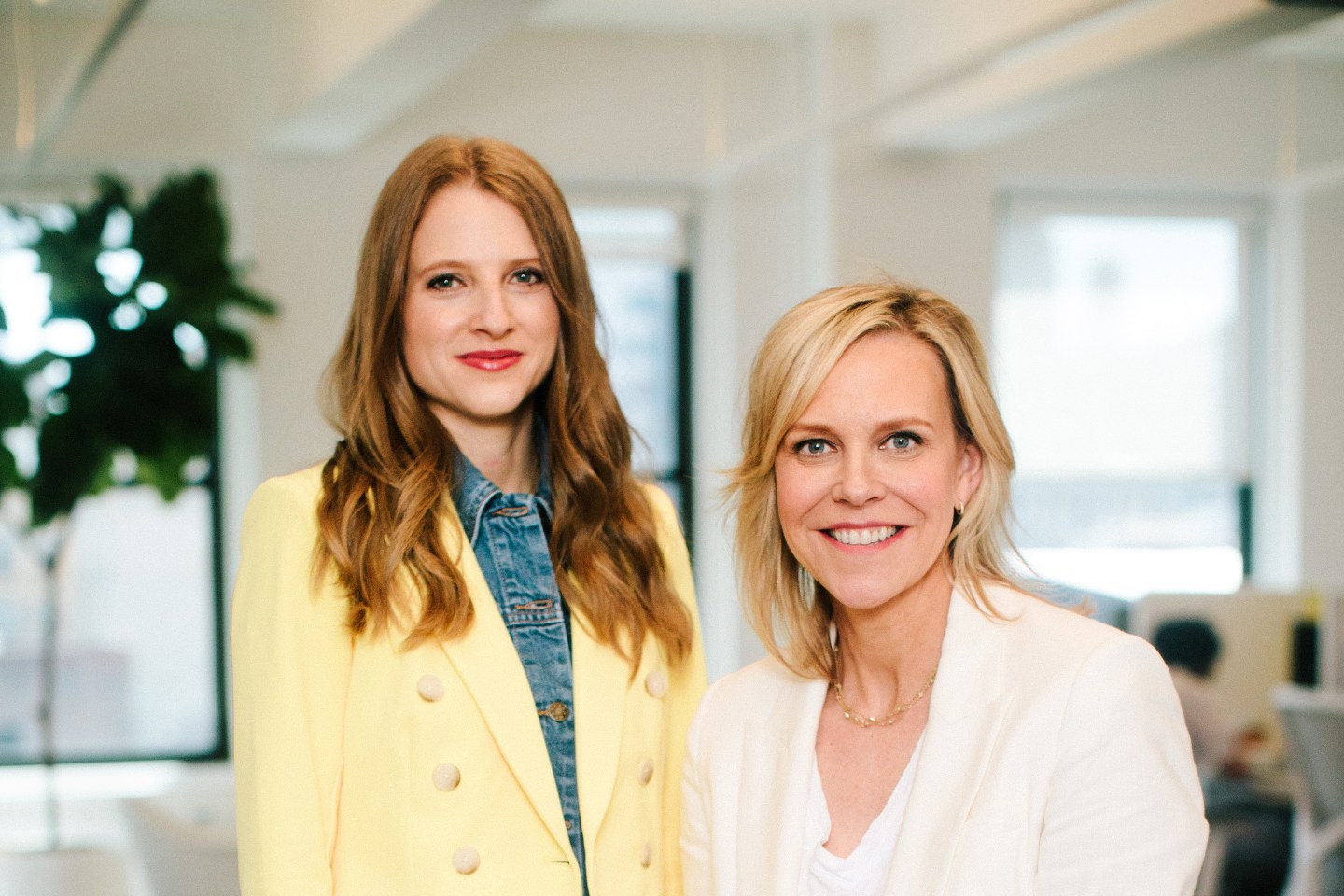 Good morning, Broadsheet readers! New York Magazine updates its 50-year-old abortion guide, Bill Cosby is back in court, and Blackstone is turning to its growth playbook for the sunscreen brand Supergoop. Have a terrific Tuesday.

– Fun in the sun. Since Blackstone took a majority stake in Bumble in 2019, the private equity firm has made identifying high-growth, high-potential female-founded businesses a new specialty. The latest company to join its portfolio is Supergoop, the sun care brand founded by Holly Thaggard and led by CEO Amanda Baldwin.

Since its December 2021 majority stake in the sunscreen brand, Blackstone has quickly executed a strategy similar to the one it pioneered at Bumble and has polished at Spanx, the Sara Blakely-founded shapewear and apparel brand it acquired just a few months before its Supergoop deal. Today, Supergoop has become even more integrated into the Blackstone portfolio, adding a new class of investors, Fortune is first to report. Blackstone-backed founders Blakely and Whitney Wolfe Herd of Bumble are investing in the sun care brand, along with an eclectic group of angel investors: former J. Crew creative director Jenna Lyons, actor Hugh Jackman, and golfer Michelle Wie. (Wie is a longtime fan of the brand; Jackman has a pre-existing relationship with Blackstone; and Lyons connected with Supergoop through a board member.)

The investments set the stage for the next phase of growth at Supergoop, which Thaggard founded 15 years ago. “The time is right to put together a wider, more diverse crew,” she says. “For the last 10 years, we’ve bit off what we could at the size we were. It’s exciting to scale to the size where we can reach more people.”

While the scaling process is still in its early days, Blackstone plans to put resources behind Supergoop’s marketing efforts and its entry into international markets. (The firm didn’t disclose the terms of its investment in Supergoop, but Supergoop says its revenue, reported at around $20 million in 2017, has increased 20-fold in the past five years.) Blackstone is also considering placing Supergoop products in its more than 100 hotels and resorts. “Fundamental to our thesis around investing is that businesses first have to have great product,” says Ann Chung, who spearheaded the firm’s investments in Spanx and Supergoop as the global head of consumer for Blackstone Growth. “Then it’s about building a great brand on top of great product—so we have a functional connection, and then an emotional connection.”

The strategy mirrors Blackstone’s playbook at Spanx, which has pushed the brand to expand further beyond shapewear into apparel, grow internationally, and increase its digital reach. (At Bumble, the firm built out a management team and board of directors in preparation for the dating platform’s 2021 IPO.)

“Both Spanx and Supergoop have passionate, loyal consumer bases, and were ready for their next phases of brand-building,” says Jonny Bauer, Blackstone’s global head of brand strategy and transformation. Jon Korngold, head of Blackstone Growth, explained the thread between these bets for a Fortune feature in December, saying, “These are regional champions that are aspiring to be big, global leaders. If we can bring our resources and serve as an extension of the management team’s bandwidth, we can help them pursue transformational growth opportunities without the execution risk sometimes associated with hyper-growth environments.”

Although it might seem like Chung has her hands full with both Spanx and Supergoop, she says the firm is still on the lookout for other women-led businesses. (Outside her purview are Reese Witherspoon’s Hello Sunshine and Jada Pinkett Smith’s Westbrook, now part of the Blackstone-run Candle Media.) “We are definitely very busy, but we think what we have is the start of something really amazing,” she says.

- SpaceX solidarity? SpaceX president Gwynne Shotwell wrote a memo to staff defending founder Elon Musk in the wake of a sexual misconduct claim alleging Musk exposed himself to a SpaceX flight attendant. "Personally, I believe the allegations to be false; not because I work for Elon, but because I have worked closely with him for 20 years and never seen nor heard anything resembling these allegations," she wrote to SpaceX staff. Musk has denied the allegation. CNBC

- Campaign problems. GOP contenders have been facing off in Georgia to decide who will compete in the state's gubernatorial general election against presumptive Democratic nominee Stacey Abrams. Former Sen. David Perdue ended his campaign ahead of today's primary election against Gov. Brian Kemp—with some racist comments about Abrams. "She is demeaning her own race," Perdue said, referencing Abrams's message to Black farmers and workers in the state that they should have other employment options if desired. Washington Post

- 50-year update. New York Magazine is revisiting its abortion guide for its newest issue. The magazine first published an abortion guide in 1972, one year before Roe v. Wade, sharing where and how women could receive abortion services in New York. This time, the guide has an online database in which abortion providers, funds, and transportation options are searchable by ZIP code. Sources for remote services, like ordering an abortion pill by mail, are also available. New York Magazine

- Back in court. Bill Cosby is on trial this week for a lawsuit alleging he sexually assaulted a woman in 1975 when she was 16. The civil lawsuit is the first to go to court since Cosby's criminal conviction was overturned almost a year ago. Judy Huth, now 64, first spoke out against Cosby in 2014, saying he brought her to the Playboy Mansion and assaulted her in a bedroom. Cosby, who has faced over 60 allegations of abuse and rape from women, denies the allegations. New York Times

- Match point. Naomi Osaka revealed she’s likely to forgo playing in the Wimbledon tennis tournament this year following her loss in the French Open on Monday. Wimbledon recently announced it would remove ranking points from the tournament, which Osaka said influenced her decision because the competitive ranking motivates her. Osaka, who recently injured her left Achilles, lost her opening match to tennis player Amanda Anisimova 7-5, 6-4 on Monday. ESPN

MOVERS AND SHAKERS: Thinx hired Johnson & Johnson's Meghan Davis as CEO; she succeeds Maria Molland, who is stepping down from the role. Fortune alum Caroline Fairchild, who most recently was an editor-at-large for LinkedIn, has joined the Web3 collective for women and nonbinary people BFF as editor-in-chief. Social psychologist and Stanford University professor Jennifer Eberhardt has joined the Innocence Project's board of directors. Natalie Bastian has been named global chief marketing officer of Teads.

- UN visit. Michelle Bachelet, the United Nations High Commissioner for Human Rights, embarked on a six-day trip to China on Monday. Her visit comes ahead of a report investigating claims of human rights violations against Muslim minorities in the Xinjiang region by the Chinese government. The U.S. has expressed concerns that the visit will be drastically limited and fail to provide adequate insight. Wall Street Journal

- Winning strategy. In a 19–3 vote, quality assurance testers for the Activision Blizzard subsidiary Raven Software won their bid for a union on Monday—a first for a major North American video game publisher. The National Labor Relations Board accused Call of Duty-maker Activision (currently finalizing a $69 billion deal to be acquired by Microsoft) of illegally threatening employees with its strict social media policy. New York Times

- Investigating abuse. A new investigation shows that the Southern Baptist Church hid allegations of sexual abuse against more than 700 pastors for more than 15 years. Survivors reported that the church’s executive committee often stonewalled their allegations, and instead moved the accused pastors between churches. Survivors were compelled by the #MeToo movement to come forward, using hashtags #ChurchToo and #SBCToo as calls for action. The executive committee's general counsel called the allegations "a satanic scheme to completely distract us from evangelism." Christianity Today

- DIY gets dangerous. The baby formula shortage has resulted in the viral spread of homemade formula recipes rife with misinformation. The FDA and the American Academy of Pediatrics have issued warnings for these recipes, saying they lack the nutrients infants need; doctors are already treating children who’ve consumed homemade formula. YouTube and TikTok have taken down formula recipe videos on the basis of misinformation, while other platforms have been slower to respond. Bloomberg

The myth of 'mom hair' Glamour

Laura Dern: Was our age gap in Jurassic Park 'completely appropriate?' The Times

"I can, not arrogantly but confidently, say I am my own competition."

- "Call Her Daddy" host Alex Cooper on the audience reach of her podcast and why she considers her biggest competitor to be herself—not Spotify's No. 1 podcaster Joe Rogan.