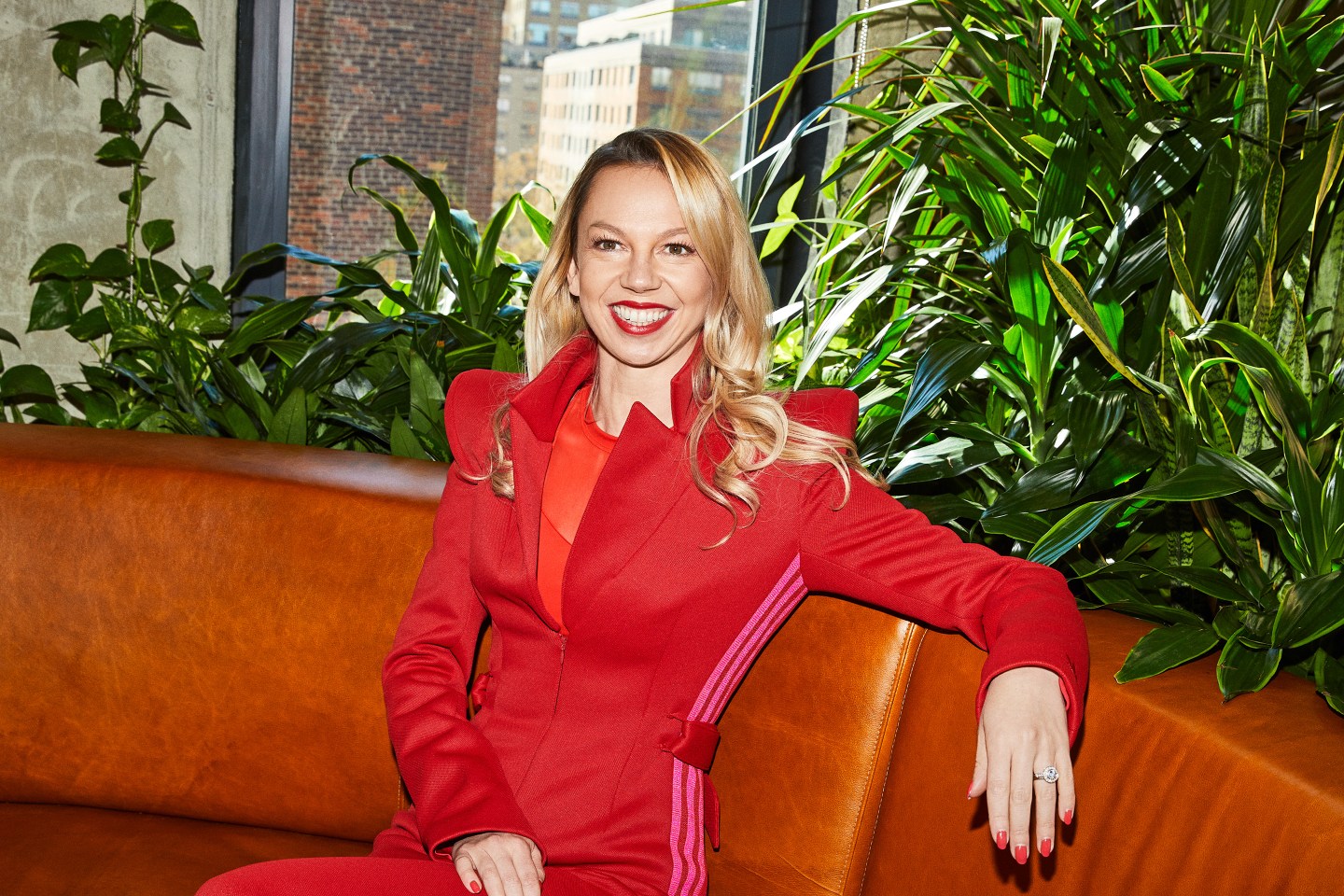 Good morning, Broadsheet readers! Google figures out how to bring its workforce back to the office, Jill Biden will embark on her second solo trip, and CEO Renate Nyborg is trying to make Tinder a more welcoming place for women. Have a great Wednesday.

– The right swipe. The business of online dating has been headed by prominent women, from Bumble founder Whitney Wolfe Herd to Match Group CEOs Mandy Ginsberg and Shar Dubey. But it wasn’t until recently that the biggest dating app, Tinder, could add its own executive to that list.

In late 2021, the company promoted Renate Nyborg, who previously ran its European, Middle East, and Africa business, to the CEO job, making her the first woman to hold the role in Tinder’s 10-year history. I spent the past several months getting to know Nyborg and learning about her vision for the dating app. Hours of conversation culminated in the first profile of Nyborg since she took the top job.

As I write in the story, Nyborg seems to have sprung fully formed from the brain of the company’s brand marketing team. Not only does her resume include stints as both a startup founder and executive at major corporations, including Apple, but she even met her husband on Tinder six years ago. With a global perspective, she can see past Tinder’s reputation in the U.S. as a sometimes hostile place for women users and, at one point, employees (see: Wolfe Herd’s lawsuit). Though the app was originally buoyed by millennials, Nyborg is now rebuilding primarily for Gen Z, its rising share of LGBTQ+ users, and a more global audience.

Improving the user experience for women on the app has been a key focus for the CEO who set out to understand what women disliked about the platform. Her team found that as much as women had concerns about in-real-life safety, they also wanted Tinder to simply feel fun. In response, Tinder is rolling out new features like “swipe party,” which allows users who don’t have Tinder accounts to swipe with their friends who do.

Match Group, Tinder’s parent company, is similarly in a transitory period. CEO Shar Dubey will step down at the end of the month; her successor is Bernard Kim, an outside hire from the gaming company Zynga. His appointment reflects where the company sees its future growth stemming from: gaming, Web3, and other emerging technologies. After first fixing the app’s fundamental issues—women’s experiences on the platform—these strategic pivots may be on the horizon for Tinder as well.

Read my full profile, here, for more on Nyborg’s personal story—from the family tragedy that shaped her outlook on life to meeting her future husband on her first day on the app. As Nyborg says of Tinder: “People are just looking for a sense of connection.”

- Game changer. After a long battle with the U.S. Soccer Federation, which included a gender-discrimination lawsuit, the women’s national team finally struck a labor deal that will close the pay gap between them and the men’s team and ensure equal salaries and bonuses, including for the World Cup. The U.S., according to the USSF, is now the first country to grant equal pay for its men’s and women’s soccer teams. Washington Post

- Hybrid work lessons. As companies test out return-to-office strategies, Google's may be a test case. Fortune senior editor Beth Kowitt dives into the tech company's quest to bring its 165,000-person workforce back to the office in a new feature. Google chief people officer Fiona Cicconi is leading much of this strategy—she believes in eventually switching to "activity-based flexibility," where workers choose to come in based on what's on their agenda that day, rather than designated in-office days of the week. Fortune

- Packed schedule. President Joe Biden will host Sweden’s prime minister Magdalena Andersson and Finland’s Prime Minister Sanna Marin at the White House on Thursday to discuss their NATO applications and security in Europe. First Lady Jill Biden, meanwhile, will embark on her second solo trip on Wednesday, visiting leaders in Ecuador, Panama, and Costa Rica to discuss U.S. partnership in the region. The trip is a precursor to the U.S. hosting the Summit of the Americas next month.

- Dead-heat. Rep. Karen Bass earned a key endorsement in the Los Angeles mayor's race Tuesday from former rival candidate Mike Feuer, giving her an edge ahead of the city’s June 7 primary election. Bass, a Los Angeles Democrat who’s served parts of the city in Congress since 2011 and made President Joe Biden’s shortlist of vice presidential candidates in 2020, is in a deadlock with candidate Rick Caruso, a real estate business owner and billionaire. Caruso, a former longtime Republican who registered as a Democrat in January, has poured nearly $24 million into ad funding for his campaign. Vanity Fair

- Flying in formula. On Monday, baby formula manufacturer Abbott Nutrition announced an agreement with the FDA to reopen its Michigan plant within two weeks. Following the plant's closure, which contributed to a 43% out-of-stock rate for infant formula in early May, Abbott has increased production at its Ohio and Arizona plants and flown formula in from its Ireland facility. Before the shortage, only 2% of formula consumed in the U.S. was imported. Business Insider

- Inescapable reputation. Since 2019, Sports Illustrated has pushed a rebrand of its annual swimsuit issue, touting the diversity of its featured models—with mixed results. This year, the cover features Elon Musk's 74-year-old mother Maye Musk, and the first plus-size and Asian model to cover the issue, Yumi Nu. The issue also features model Kelly Hughes, whose C-section scar was visible.

The many, many costs of breastfeeding Vox

What will it take for momfluencers to speak up about abortion rights? The Cut

“This is very personal for us—we’ve got two 9-month-old children; baby formula is a very big part of our lives.”

-Transportation Secretary Pete Buttigieg on the baby formula shortage’s impact on his family.