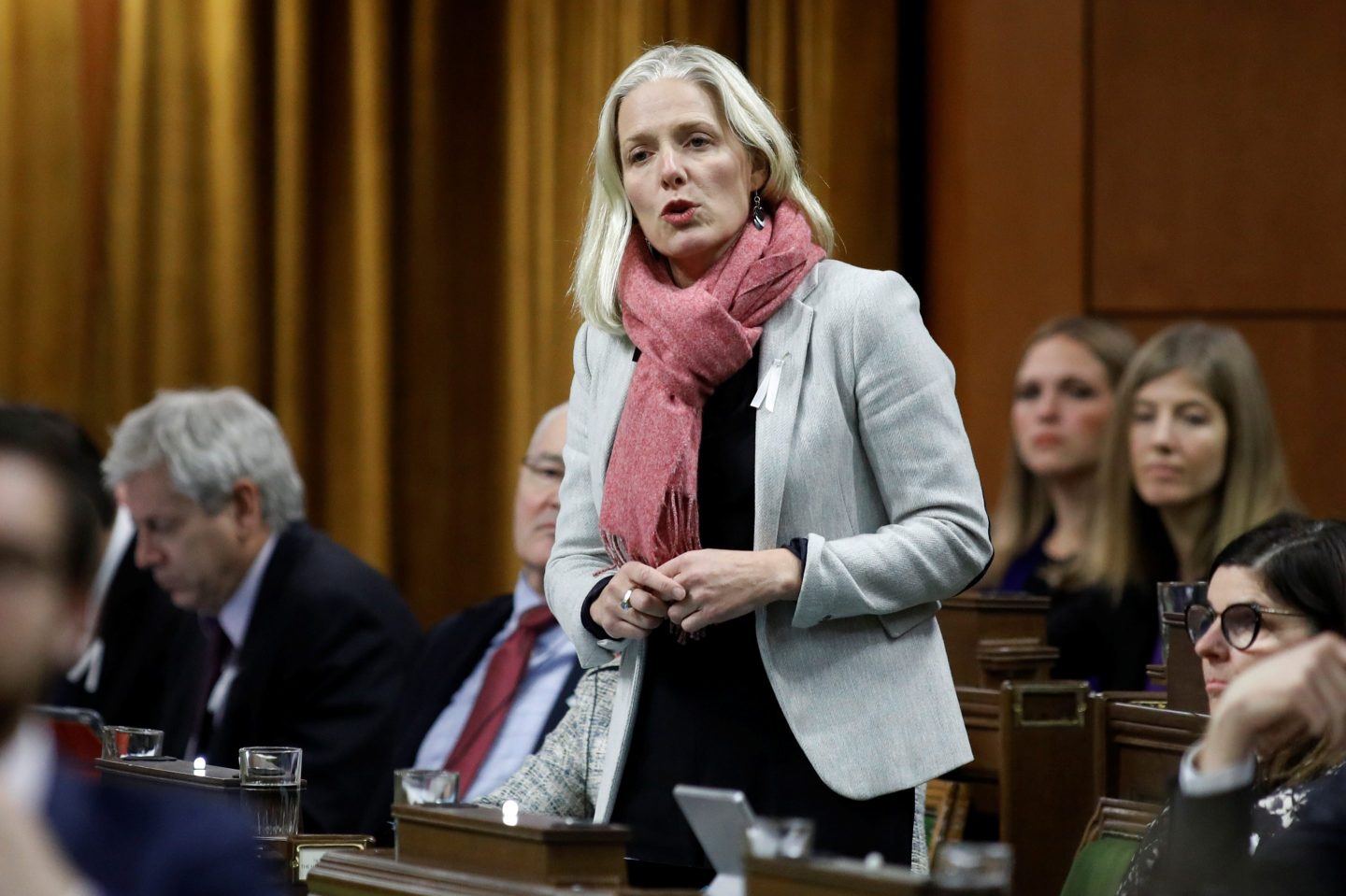 Former Canadian Minister of Infrastructure Catherine McKenna speaking at the House of Commons in 2019.
Blair Gable—Reuters

The universally accepted Sustainable Development Goals (SDGs) were established by the United Nations General Assembly in 2015, and now the hope is that a new UN panel will help to push the industry forward in making all stakeholders more accountable for their climate pledges.

United Nations Secretary-General António Guterres launched the bureaucratically named High-Level Expert Group on the Net-Zero Emissions Commitments of Non-State Entities in March to do just that.

But can a new UN panel of climate heavyweights really simplify net-zero emissions standards for businesses and municipalities to call out greenwashing and cut through the fog of pledges, plans, and coalitions?

“I hope so, is the long and the short of it,” Aniket Shah, the global head of ESG research at investment bank Jefferies, tells Fortune. “This whole space right now is a very complicated and confusing one.”

Shah says he’s not just talking about the dozens of groups like the Global Financial Alliance for Net Zero (GFANZ), but also an array of coalitions and entities offering disclosure metrics like the Science Based Target initiative (SBTi) used by a growing number of firms and groups to voluntarily disclose greenhouse gas (GHG) emissions and other climate metrics.

The need for consensus on how to cut and track emissions reductions has never been more urgent: Across business, science, and government there is a growing sense that 2050 as a net-zero goal is far from soon enough to avert climate catastrophe, leaving too much room for unkept or vague promises. Yet there’s no uniform standard for metrics that allow the public to figure out if a net-zero plan holds scientific weight or is a marketing ploy.

Stakeholders—from ESG analysts and investment bankers to academic researchers and investor advocates—say a solid set of recommendations from the panel could mean more disciplined net-zero forecasts and trackable metrics.

One thorny problem may be how to tailor recommendations across geographies. For instance, should an automaker in India fall under the same set of guidelines as one in Europe? Would a multinational firm follow different paths in various countries?

“There are just some very important conceptual issues that need to be answered. And I hope that this panel sitting above it all can come to some conclusions about it,” Shah says. “So I don’t want to preordain whether it will or won’t be successful: All I know is that it is absolutely necessary that it be successful.”

The panel aims to deliver at least a preliminary or even the final set of recommendations by COP27 in November, though that could change, a senior UN official said. The March announcement estimates work will take nine to 12 months. The group will meet “as often as needed” to get the job done, an initial press release notes.

Within that timeframe, the panel is to recommend: standards and definitions for setting net-zero targets; criteria used to assess, measure, and report net-zero pledges; processes to verify progress; and a map for national and international regulators to monitor the particulars, according to the UN.

“The world is in a race against time. We can’t afford slow movers, fake movers, or any form of greenwashing,” Guterres told the panel at its inaugural meeting April 27.

Catherine McKenna, Canada’s former Minister of Environment and Climate Change and a lead negotiator of the 2015 Paris Agreement, heads the group of eight men and eight women whose gravitas cuts across science, regulation, governance, and geography.

“I understand the concern, because there are just so many net-zero pledges and so many different bodies and organizations,” McKenna said at a March 31 UN briefing. “And we do need to bring coherence. I mean, you can start with the very best basic thing: What is net zero?”

Last year, only one-third of the more than 13,000 firms that disclose metrics through CDP (formerly the Carbon Disclosure Project) set emissions reduction targets the nonprofit says are credible. And a study from the New Climate Institute released in February found that most high-profile companies aren’t doing enough to back up promises, with few firms publicly disclosing specific updates on progress toward their announced net-zero goals.

Yet interim targets may be even more important than longer-term pledges for net zero in 2030 or 2050, Harry Fearnehough, a policy analyst at the New Climate Institute, told Fortune.

”Because we know that if we don’t do something in the next five years, at a global level, and if these big companies are not doing something, we’ve blown our chance of avoiding the worst impacts of climate change,” Fearnehough says. “These five- to 10-year targets are probably the most important part of the picture today, much more important than when we start thinking about 2050.”

McKenna says recommendations are likely to include tools to measure Scope 3—shorthand for a company’s emissions from activities that aren’t directly owned or controlled by business. Scope 3 makes up the bulk of global emissions.

“Look, whether it’s businesses or ambassadors or cities or regions, I think most folks want to do the right thing,” McKenna said. “And it only supports them by having very credible standards that they can be measured against—and measured against their peers—because there are some folks who want to greenwash. So the more that we can have robust standards, clear standards, including I believe Scope 3, the more that we’re going to be able to be ambitious on climate action and reach the goal of 1.5 degrees.”

The new panel won’t get down to the level of “naming and shaming” individual companies or other entities, Selwin Hart, the UN assistant secretary general for climate action, said at the same briefing.

New disclosure rules proposed by regulators like the U.S. Securities and Exchange Commission, like those in financial statements, typically examine a company’s past record, in this case through mandatory reports like 10-K filings. That leaves room for greenwashing when it comes to targets.

What the new panel can do is use the UN’s “moral authority,” sparking public pressure that compels companies to report transparent, comparable targets, said Stefan Reichelstein, director of the Mannheim Institute for Sustainable Energy Studies and a Stanford business school professor emeritus. He coauthored a recent preliminary study recommending corporate carbon reporting frameworks.

“If enough of them fall in line, then of course this becomes self-fulfilling. Then others don’t want to be left behind. And then it will really become a commonly accepted standard,” Reichelstein says, noting net-zero planning remains voluntary. “I mean, that’s all we have. This is all in the realm of what we call voluntary disclosures by corporations, right?”

Such a standard “shouldn’t sound in any way exotic to any businessperson, because it’s the basic system of budgets, standards and actuals. And comparing those—it’s what every company does internally, every day in its financials,” Reichelstein notes.

The same goes for investors—and the giant firms that represent them, says Kirsten Snow Spalding, who leads investor initiatives at advocacy group Ceres. She wants the UN panel to set a “high, high bar.”

“If you sign up for one of these initiatives, then there’s an external body that says yeah, these are these real commitments. You can’t get away with just doing some accounting, back-and-forth. ‘One says we show high emissions and this one low emissions, and therefore we’re at zero’—that doesn’t work,” Spalding tells Fortune.

Investment firms that join climate alliances want clear standards to undergird financial risk before committing, she notes. With standards in hand, private firms and pension funds can credibly apply pressure for change, be held to standards themselves, and invest effectively.

“We’re trying to impact the real economy. That’s the only way to affect risk,” Spalding says. “This body will provide that validation.”

UN-led facilitated groups have landed with a thud before. But a senior UN official told reporters at an April briefing that the firms “doing the right thing” are eager to separate themselves from those that are greenwashing:
“We will have a good set of recommendations, and we will also get good buy-in from those entities that want to do the right thing and those that are doing the right thing. And that will be a basis, I think, for acceptance of these recommendations,” the official said. But, he added, “nothing is guaranteed.”