The art of being the only one in the room 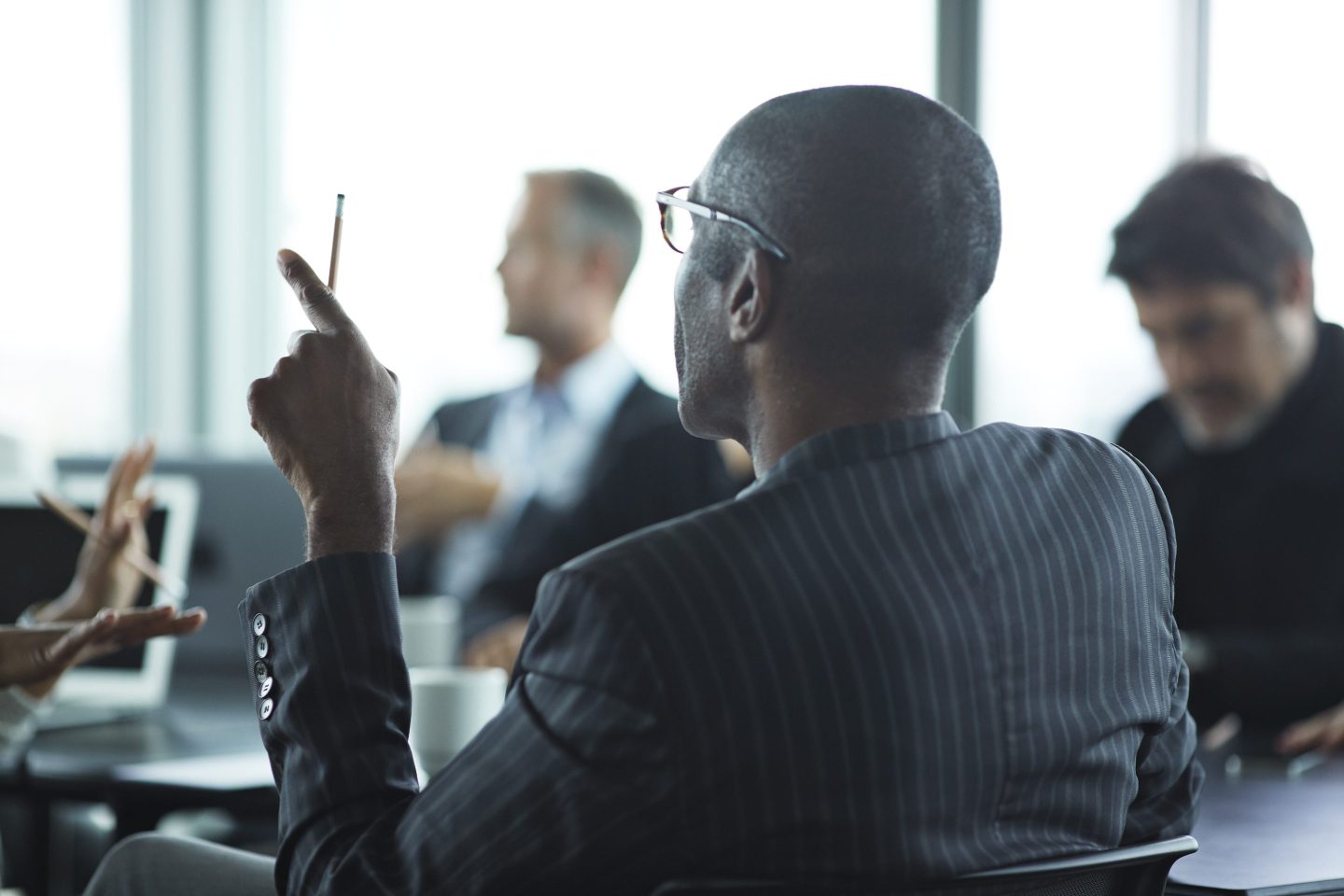 While the constant need to overachieve just to keep pace with their peers can wear Black workers down, the disproportionately negative consequences of simple human fallibility are equally, if not more, taxing.
Getty Images

One of the critical steps to long-term career success is being “in the room” where key decisions are made and opportunities for advancement are created.

The “room” is both a physical and metaphorical space. In pre-pandemic times, you might walk by a glass-walled conference room where senior management could be seen huddled in a meeting, the team leader seated at the head of a table saying the least but wielding the most influence.

In our current times, “the room” has become an even more elusive space, observable from the outside only, in the form of overlapping blue blocks on Outlook calendars with embedded links to the videoconference platform of choice.

Black professionals often have a more difficult time being invited into the room. If and when we are, we sometimes find that our ability to leverage those opportunities is constrained by a sense, real or perceived, that our contributions will be met with some added degree of scrutiny or skepticism.

Even if we succeed at obtaining these opportunities and delivering results, there always seems to be another room higher up the management chain to which our access is restricted.

Overcoming these barriers requires mentorship to better understand and engage the dynamics at play, the encouragement and sponsorship of senior leaders, and above all else, persistence.

For those with entrepreneurial drive, one of the solutions to being excluded from the room is to create a room of your own. Black business pioneers such as Reginald Lewis, Robert L. Johnson, and Maverick Carter illustrate this path to success.

Even these trailblazers recognized the need early in their careers to learn through firsthand experience the skills and principles that would be necessary to succeed in their own endeavors.

Lewis began his career as a corporate lawyer at Paul, Weiss, Rifkind, Wharton & Garrison LLP, one of the world’s premier law firms. Johnson’s career in television began with a job at the Corporation for Public Broadcasting, a powerful nonprofit organization that works in partnership with national broadcasting companies to ensure broad access to noncommercial television programming. Carter’s path included an internship at Nike to learn the business of sports marketing at a company that has been a quasi-peerless innovator in this field.

Other Black business leaders such as Ursula Burns, Kenneth Frazier, Kenneth Chenault, and Richard Parsons found success by rising through corporate ranks to the head of the table. Of course, a common thread in each of these stories is proven competence well beyond the levels of their peers. Nonetheless, the presence of Black CEOs in Fortune 500 companies has remained persistently tenuous.

In the past, Black professionals wore their ability to outperform their counterparts as a badge of honor. Today we recognize that the need to work twice as hard and be twice as good for the same level of recognition effectively acknowledges that our work is worth half as much.

Moreover, it is not only the constant need to overachieve just to keep pace with their peers that can wear Black workers down. The disproportionately negative consequences of simple human fallibility are equally, if not more, taxing.

In a 1987 interview titled “The Lot of Black Professionals,” Community Service Society CEO David Jones discussed his early career experiences as a Black attorney in the mid-1980s at another leading law firm. Jones described the pressure borne by the handful of Black associates at the firm, noting that “you began to understand how you couldn’t afford to make a mistake, while your white compatriots were getting patted on the back after each mistake and told, ’I did the same thing when I was a young lawyer.’”

I was fortunate enough to have stumbled across Jones’s interview at a point in my career where I was experiencing precisely the kind of pressure that Jones described. Unable to advance, I was plagued by the same kinds of doubts and self-recrimination that Jones noted had driven other Black attorneys into depression.

As a senior associate attorney, I had recently had the surreal experience of being in a room with a white partner and a white junior attorney to explain a complex client issue and propose a solution. When the junior attorney reiterated my proposed solution just to confirm that he had understood the point correctly, the partner proclaimed him “some kind of genius,” as if he had just devised the solution all on his own. The junior attorney looked at me with an expression of embarrassed commiseration. Reading about Jones’s experience provided me with much-needed reassurance that there might be larger structural forces impeding my advancement.

Jones also described the lack of a strong support network among the Black associate attorneys in the absence of a strong senior mentor. Of course, this is not only true of the corporate world.

In highly sought-after civil service jobs such as firefighting, generational mentorship in some of the country’s largest fire departments has resulted in a restrictive pipeline that has resisted diversification over decades.

In the world of NFL coaching, as The Athletic notes with respect to the 2021 season, “at least one in seven NFL coaches in a supervisory role (non–entry level) is related to a current or former NFL coach,” and “10 of the league’s 32 head coaches are the son/father/brother of a current or former coach.”

It is the development of precisely these types of networks that would enable a critical mass of Black professionals to grow their presence in the rooms where opportunities for advancement are created and to enable those professionals to stay the course despite the headwinds they will face.

The value of simply knowing that the obstacles one is encountering are not due to some unique personal failing—but that others are experiencing the same difficulties and challenges—is immeasurable.

So what does one do when one is the only Black person in the room? The answer, of course, depends largely on the room, but a few essential truths tend to be broadly applicable.

Be overprepared. We’ve all heard the saying, “Talk softly but carry a big stick.” In the corporate world, knowledge and preparation is the big stick that anyone can carry, irrespective of position or seniority.

Walking into the room with the facts at hand and a thorough understanding of the issues under discussion is a confidence-builder that enables you to have the greatest impact with the fewest words.

Be your authentic self. I used to roll my eyes quite a bit at this frequently misused mantra.  A certain amount of code-switching is inherently necessary for Black people to navigate the professional world. However, it should not become a crutch.

Lean into the strengths of your background. Embrace the things that make you different from everyone else in that room. These are tools that only you can bring to bear.

Use your presence to advocate for others. Once we have reached a point in our careers where we have managed to obtain a seat at the table, we need to actively advocate for further change, to bring others along.

Duane Cranston is a partner and associate general counsel at Known, a marketing and creative agency. He has written extensively about the intersection of law, technology, and data privacy.