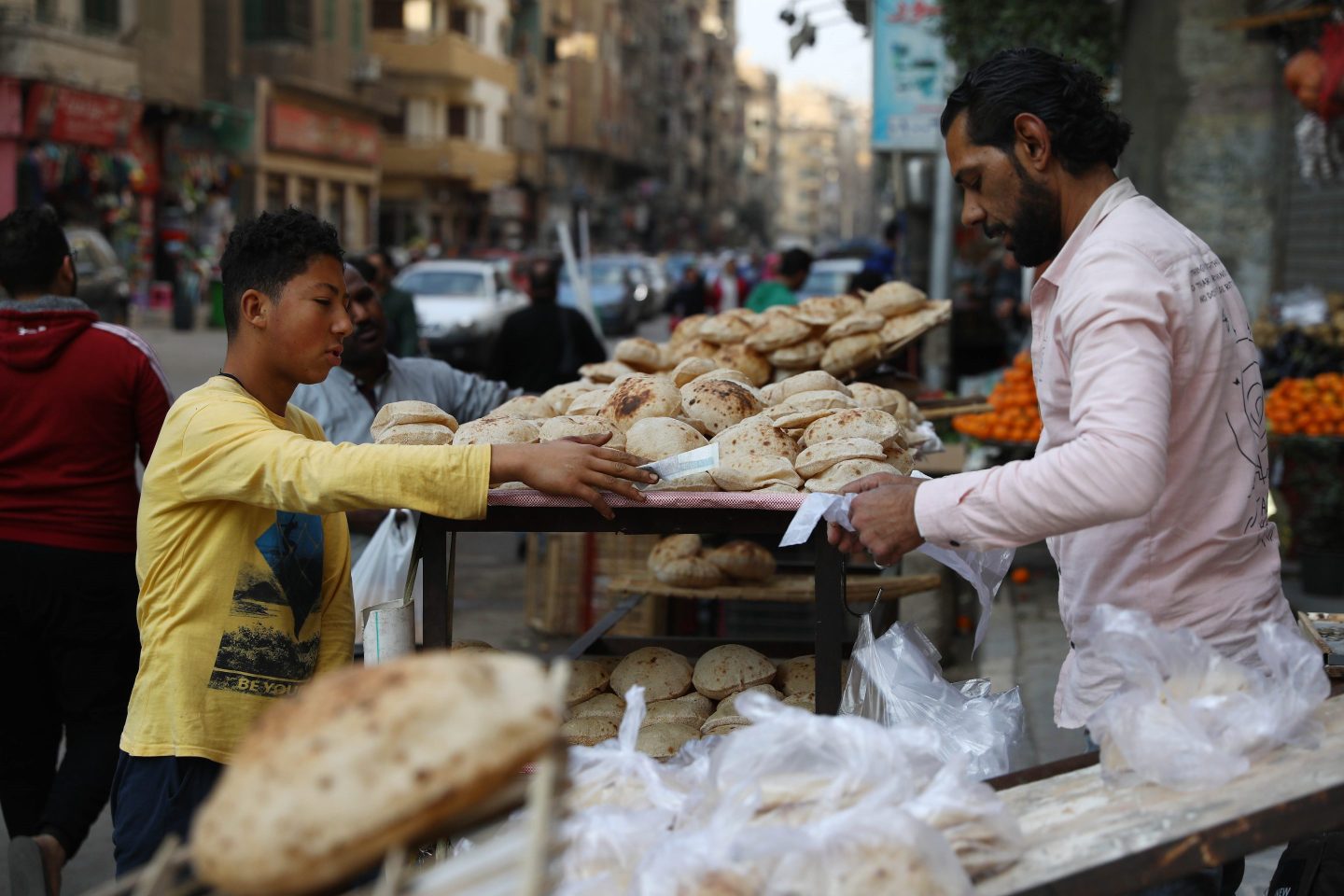 The IMF’s surcharges are levied on the countries least able to afford them as food and energy prices continue to rise.
Ahmed Gomaa—Xinhua/Getty Images

Even as bombs fall on Ukraine, refugees flee, and each day brings news of fresh horrors of civilians targeted and buildings razed, and as Ukrainian president Volodymyr Zelenskyy pleads for more international assistance, the beleaguered Ukrainian government is being made to pay tens of millions of dollars each month in unnecessary surcharge fees to the International Monetary Fund (IMF).

And as the war between Russia and Ukraine–both major grain exporters–drives up global food and energy prices, cash-strapped countries such as Egypt and Pakistan must also continue to divert much-needed funds to pay fees to the IMF. In fact, this year alone the IMF’s five largest borrowers (Argentina, Ecuador, Egypt, Pakistan, and Ukraine) are on course to pay $2.7 billion worth of these extra fees that are tacked on to loan payments to the Fund.

It should be obvious that these countries could better use these funds to respond to the health, economic, and other effects of the pandemic and, in Ukraine’s case, to deal with a full-blown military invasion. Even before the pandemic, more than 60 countries were spending more on debt service than on health care.

The added burden from surcharges is no trivial amount. Currently, 16 countries are paying IMF surcharges, which increase their collective borrowing costs by over 64%. The Center for Economic and Policy Research (CEPR) estimates that surcharges make up close to half of all non-principal debt service owed to the Fund by its five largest borrowers.

The IMF’s surcharges are unfair. They are imposed on countries that are already facing enormous economic challenges. The surcharges are also counterproductive. They are inherently procyclical, likely to prolong and possibly worsen a country’s economic downturn, as they are levied on borrowers least able to afford them.

Surcharges increase borrowing costs. With surcharges, the interest rate is two to four times the IMF’s regular interest rate for borrowers of around one percent. No wonder that even the Peterson Institute for International Economics has said that the IMF “needs to take the lead in protecting debt sustainability by reassessing its policy on interest surcharges for the large borrowings that are likely to be needed post pandemic.”

The surcharges are also unnecessary. There are two rationales that the IMF offers for why it imposes the surcharges, and neither holds up under scrutiny.

First, the IMF claims that it needs the money from surcharges for its own operations. Leaving aside that such operations include perks like higher-class seats for IMF staff on flights, it is entirely backwards for the organization to rely on countries already facing economic shocks to replenish its reserves (its precautionary balances). As the IMF’s own analyses show, increasing the loans payments of countries with high levels of debt only increases the risk of non-repayment, or of delayed payments. This in turn creates an even greater need for the IMF to build up its precautionary balances.

The IMF should not need to rely on the revenue from surcharges. The income generated by surcharges is small relative to the IMF’s other sources of funding, and the Fund’s outstanding loan portfolio is already at a record high of almost $144 billion.

Second, the IMF attempts to justify its surcharges by arguing they will reduce credit risk and discourage unnecessary borrowing. However, there are already strong disincentives for countries to borrow from the IMF, including the fact that loans come with strict, and generally painful, policy conditions. Countries don’t borrow from the IMF unless they absolutely have to.

Surcharges go against the IMF’s Articles of Agreement, which state that IMF lending cannot be “destructive of national or international prosperity.” Yet surcharges are expected to become far more prevalent in the coming years: according to the IMF’s own forecasts, as many as 38 countries will be paying surcharges by 2024, creating further financial stress that will weaken these countries’ ability to recover from multiple economic shocks.

The IMF and World Bank are about to hold their Spring meetings. This would be a good time for the world’s finance ministers to agree on one simple measure to help countries burdened by high levels of debt: eliminate surcharges.

Already, prominent economists, including Nobel laureate Joseph Stiglitz and Jayati Ghosh, an advisor to UN Secretary-General António Guterres, have called for the termination of IMF surcharges. In the U.S. Congress, legislators recently introduced the Stop Onerous Surcharges Act. Now 160 civil society organizations around the world are urging the same.

These are difficult and tumultuous times for the world, with new COVID variants threatening to emerge even as countries around the globe struggle to recover from the fallout of lockdowns and disruptions, wars raging in places such as Ukraine and Yemen, and record levels of inequality in many countries.

Doing away with the unnecessary, unfair, and counterproductive surcharges tacked onto IMF lending is one of the easiest steps we could take to help hard-hit countries in their hour of need.

Shereen Talaat is a co-director for the Middle East and North Africa at the Arab Watch Regional Coalition. Dan Beeton is the international communications director for the Center for Economic and Policy Research.