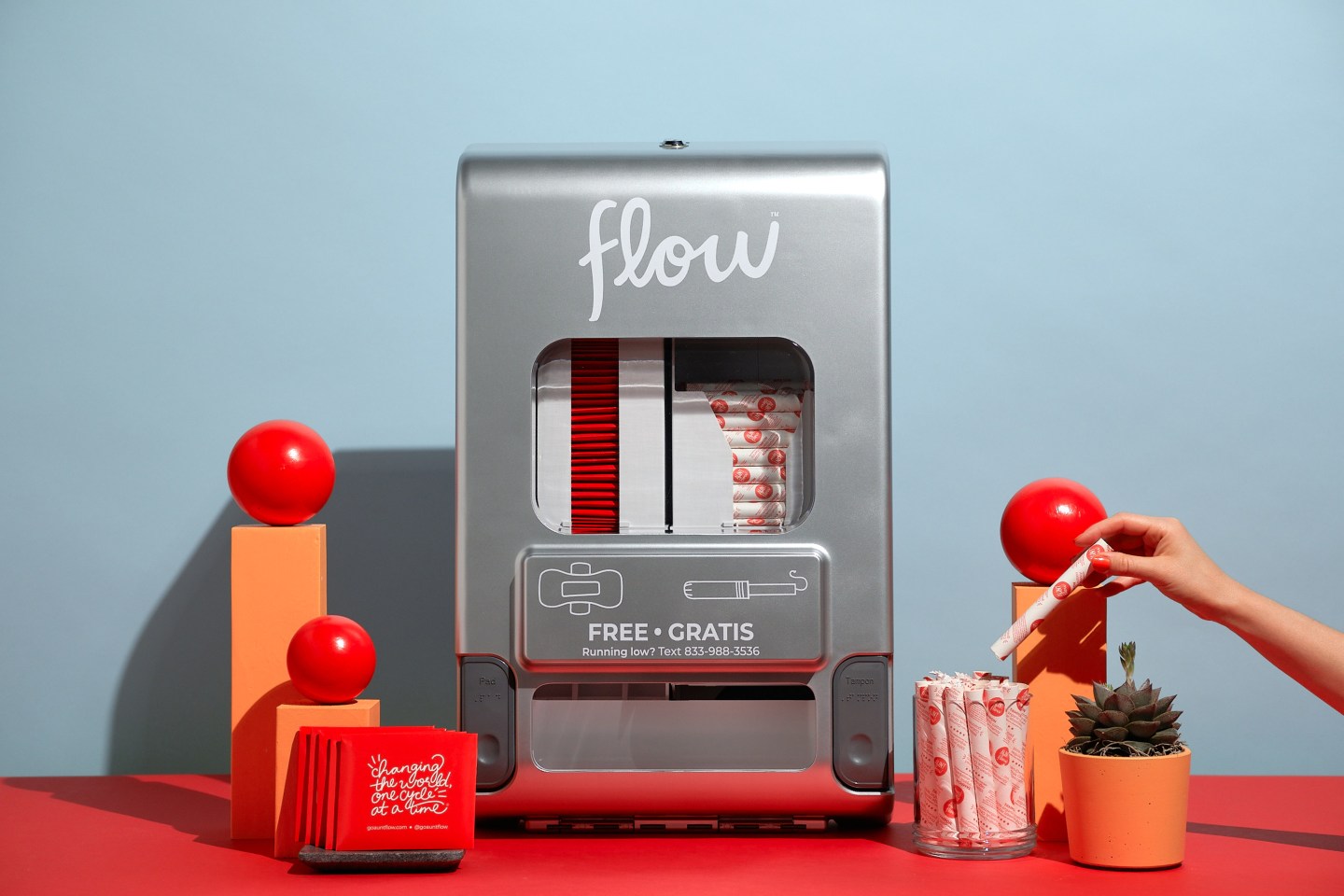 – Work flow. As companies compel workers to return to the office, some are trying to ease the pain with splashy perks like on-site concerts or food trucks. But what about the basics?

Aunt Flow, a B2B period products business that stocks tampons and pads for offices, retailers, schools, and stadiums, wants to help companies prepare their workspaces for employees who menstruate. “People are excited to go back to the office,” says founder and CEO Claire Coder. “And with that, there will be an opportunity for us to continue to stock organizations.”

The 6-year-old, Columbus, Ohio-based startup tells Fortune exclusively that it raised an $8.5 million Series A funding round, led by JLL Spark, the venture capital arm of the commercial real estate business JLL. The firm’s rationale for investing dovetails with its business purpose: it anticipates that tenants who rent its 1 billion square feet of North American commercial real estate could benefit from Aunt Flow products.

Some may not view a menstrual products startup as property tech, the typical category of investment for JLL. (Out of 40 investments, Aunt Flow is only the firm’s second in a woman-led company.) But JLL Spark principal Kitty Sullivan says the startup’s offerings are tangentially related to the industry. “There aren’t really any JLL clients for whom menstrual products would not be relevant in their restrooms,” she says.

Aunt Flow already stocks pads and tampons in 23,000 bathrooms, including Netflix and Google’s offices; Princeton and Penn State University, among others; and is in more than 200 Apple retail stores at an estimated cost of $5 per female employee per year. Sustainability-conscious companies in particular are drawn to the brand’s avoidance of single-use plastic. Apple even worked with Aunt Flow on the design of its tampon dispenser, which features a window in the front that allows janitors to see how many products are left inside without opening the metal box.

While there’s plenty of competition in the period products startup space (see: Lola, Thinx), Aunt Flow’s niche B2B focus is well-positioned for this moment of emergence from the pandemic. Coder settled on a B2B model after getting her period in a public place that lacked access to a pad or tampon. She hopes that stocking organizations with relevant supplies will keep more women from ending up in a similar scenario.

While JLL’s investment interest is clear, Aunt Flow plans to use the influx of cash to broaden its reach to corporate tenants across the U.S. as companies increasingly opt for a return to a physical hub. “Everyone is thinking about the return to work and making the office more inviting,” Sullivan muses. “How do we make employees feel more comfortable in the workplace after they’ve been working from home for so long?”

Of course, providing employees with pads and tampons is a relatively low bar for a smooth return to office. Still, many employers fall short—or have let their supplies lapse with fewer workers visiting their physical spaces.

Luckily, it’s not too late to fix that. “We are a necessity,” says Coder. “Not an amenity.”

- Brand loyalty. Simone Biles' activewear line with Athleta has debuted, following in the footsteps of Allyson Felix, whose own line with the Gap Inc. brand launched last year. The gymnast's line targets girls ages six through 12. Biles says she hopes the apparel will be meaningful for young fans at a time when they may feel insecure about themselves. The collection is currently available online and in stores, with prices ranging from $15 to $95, and sizes between 6x and 12. Essence

- Off the court. Russian and Belarusian tennis players are banned from all grass-court events in Britain happening this summer, including Wimbledon and Queen’s tournaments. So far, the ATP and WTA tours, the top tours for men and women in tennis respectively, have only barred Russian and Belarusian players from displaying their nation’s flags or playing their national anthem. Belarusian player Victoria Azarenka, who previously ranked women’s world No. 1 in singles, is among the athletes now barred from the prestigious tournaments. Guardian

- Ladies first. It's fitting that the Showtime series The First Lady premiered as Jill Biden hosted the annual White House Easter Egg Roll—the consummate first lady event. New York Times chief fashion critic Vanessa Friedman analyzes the costumes on the show, which portrays first ladies Eleanor Roosevelt (played by Gillian Anderson), Betty Ford (Michelle Pfeiffer), and Michelle Obama (Viola Davis). After all, "how they present in the world becomes shorthand for who they are and what they do," Friedman writes. New York Times

- Storied career. Laura Paugh served as SVP of investor relations over a 40-year career at Marriott. She arrived at the hotel chain after working in the male-dominated 1970s auto business as one of very few women analysts for Ford Motor Company. Paugh, who retired from Marriott two years ago, died at 67 this month from injuries sustained in a car accident. She is remembered for her close working relationships at Marriott, and overseeing 85 quarters of earnings reports alongside late CEO Arne Sorenson. Wall Street Journal

- Overdue recognition. It took 38 years and a documentary for Yale legal scholar Tracey Meares to receive the valedictorian title her high school stripped from her in 1984. The documentary No Title for Tracey depicts Meares' treatment as she neared graduation at her Springfield, Ill. high school. Expecting to become her school’s first Black valedictorian, school administrators changed the honorary valedictorian and salutatorian titles to “top students,” denying Meares from receiving the highest distinction. Guardian

- Reigning family. The Kardashians, the reality TV star family's follow-up to E!'s Keeping Up With the Kardashians, is now Hulu's most-watched series premiere in the U.S., the streaming platform reports. Hulu does not make ratings publicly available but said the data is based on premiere episode hours watched in the three days following the show’s April 14 release. Kris Jenner and her daughters serve as executive producers on the show, which features the various Kardashian-Jenner businesses, from Kim Kardashian's Skims to Kylie Jenner's Kylie Cosmetics. Variety

"I just found myself at home and figuring out who I was again as a mother, as a partner, as a writer, in the midst of an apocalypse."

-Musician Sharon Van Etten on how the pandemic, anxiety, and struggles with motherhood and coupledom influenced her upcoming sixth album.