From the Ukraine-Poland border, an urgent call for support and immigration reform 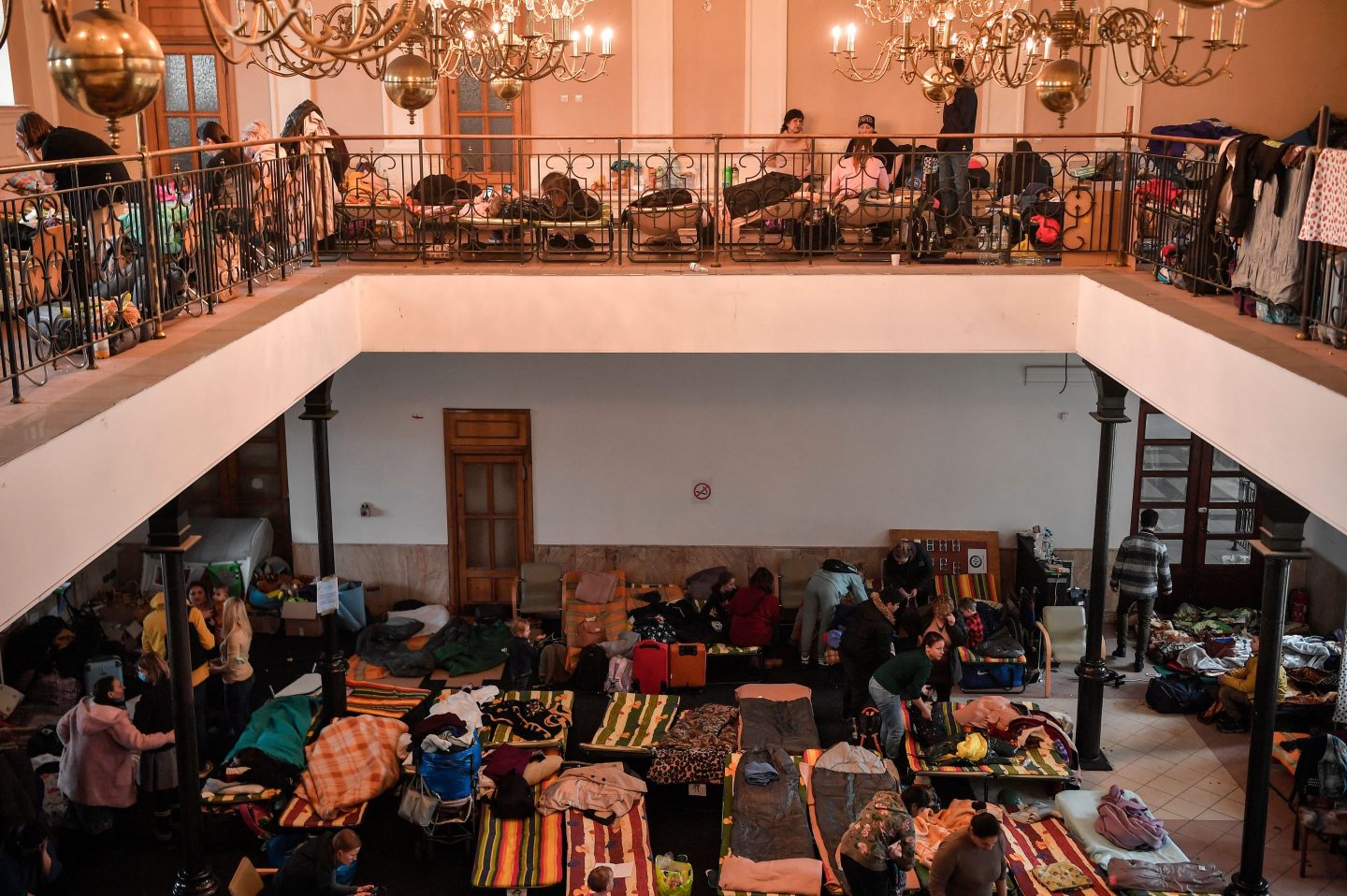 Refugees from Ukraine rest at a temporary shelter in the main train station of Krakow on March 6 as they wait to be relocated in Poland or abroad. The number of people fleeing Russia’s invasion of Ukraine has reached 4 million, according to UN agencies.
LOUISA GOULIAMAKI - AFP - Getty Images

The train from Lviv pulled into the Polish border town of Przemyśl. While the 2,000 Ukrainians packed into its 600 seats waited to disembark, dozens of Polish soldiers entered a single car, emerging one by one cradling a precious cargo: more than 50 children with profound special needs, evacuated without their parents.

Such is the horror facing families in war-torn Ukraine that mothers and fathers are choosing to send children who are not able to fend for themselves across the border into the arms of strangers. They join the more than 3 million who have crossed into Poland among the more than 4 million who have fled the country since Russia invaded Ukraine on Feb. 24—more than 800,000 of them through Przemyśl alone.

We witnessed the flood of refugees arriving on foot, in wheelchairs or carried in arms, and the warm reception of Polish volunteers. Like other business leaders in our World Food Program U.S. delegation, we wanted to understand firsthand how to leverage the resources of our law firm and our community to help in the crisis, which grows worse by the day.

One thing is clear: Time is running out. The Ukrainians and Poles we spoke to sounded the alarm on the need to address two urgent human needs: food and safety.

President Biden’s announcement on March 24 that the United States would accept 100,000 Ukrainians and donate $1 billion to European countries are welcome first steps, but the administration must swiftly follow this by expanding eligibility and streamlining intake and resettlement processes, which typically take years.

The business community, for its part, must coalesce to provide financial and logistical support for ongoing relief efforts. Even if the war ceases soon, Ukraine’s agricultural system and supply chains will not be rebuilt overnight, so food support will remain a priority, both in Ukraine and globally. The most direct way for American business to help now is to donate to organizations providing food security on the ground.

As Putin’s army lays siege to Ukraine, leveling towns with the tactics of a medieval despot, the need for emergency food relief grows exponentially. Despite the danger, the World Food Program has been transporting food into Ukraine and distributing it in the war zone. The program needs more funding from our government, from corporations, and from individuals. Many other organizations on the ground need support.

Poland is shouldering the heaviest burden. We have seen how ordinary Poles are mobilized en masse. In Przemyśl, a town that is no stranger to war, authorities and volunteers have set up a reception area stretching several blocks to register, feed, house, and transport the incoming refugees. There is soup, plus coffee, diapers, baby food, stuffed animals, warm clothes, medical supplies, and even free sim cards. Residents are opening their homes. The mayor’s own mother houses two Ukrainian families.

In the major city of Krakow, where the population has surged by a quarter, businesses have converted empty shopping malls, unused office buildings, warehouses, and train stations into dormitories for displaced Ukrainians—but food and space will soon run out. “We have to do it; we have to help,” an 18-year-old volunteer told us.

Most Ukrainian families we met said they want to stay in Europe, as close as possible to home so that they can return when it is safe. To its credit, the European Union has changed course from past crises, opening its borders, providing temporary protected status for Ukrainians to remain in various EU countries, with authorization to work and access to medical care, education, and other public aid.

For those wishing to go to the United States, even to join family there, the path is unfathomably more difficult, as so many from other ravaged countries have found out.

As we waited on the platform in Przemyśl’s train station, we spoke with a father and his 9-year-old twins, waiting for their mother to disembark. Putin’s soldiers had bombed their house, ransacked it, and taken over. One of the twins pulled out an object she’d been clutching in her pocket—a piece of shrapnel. She was keeping it, she told us, so that people would believe her family’s story of terror.

The father was interested in coming to America. Despite our combined 80 years working in the legal system, we struggled to explain some aspects of U.S. immigration law: that the term “refugee” does not necessarily protect a family fleeing a war; that our system is aimed at providing refuge only to those who can meet the high bar of particularized discrimination against them; that our Temporary Protected Status applies only to those already in the U.S.

Ultimately, we found a few crevices in the existing law that might allow this family to squeeze through to freedom, and our firm will represent them (and others in similar positions) if that is their goal. For this family and so many others, the administration’s recent announcements may provide real hope.

For those hopes to become a reality, the administration must move swiftly to promulgate the program rules, staff up, and expedite the process. And at least until we live in a world without cyclical humanitarian crises, we need an immigration law that is flexible enough to meet this kind of moment.

Loretta E. Lynch is a partner at Paul, Weiss, Rifkind, Wharton & Garrison LLP and served as U.S. attorney general from 2015–2017. Steven Banks is special counsel in the firm’s pro bono practice and from 2014–2021 served as commissioner of the New York City Department of Social Services, the largest social services agency in the U.S.