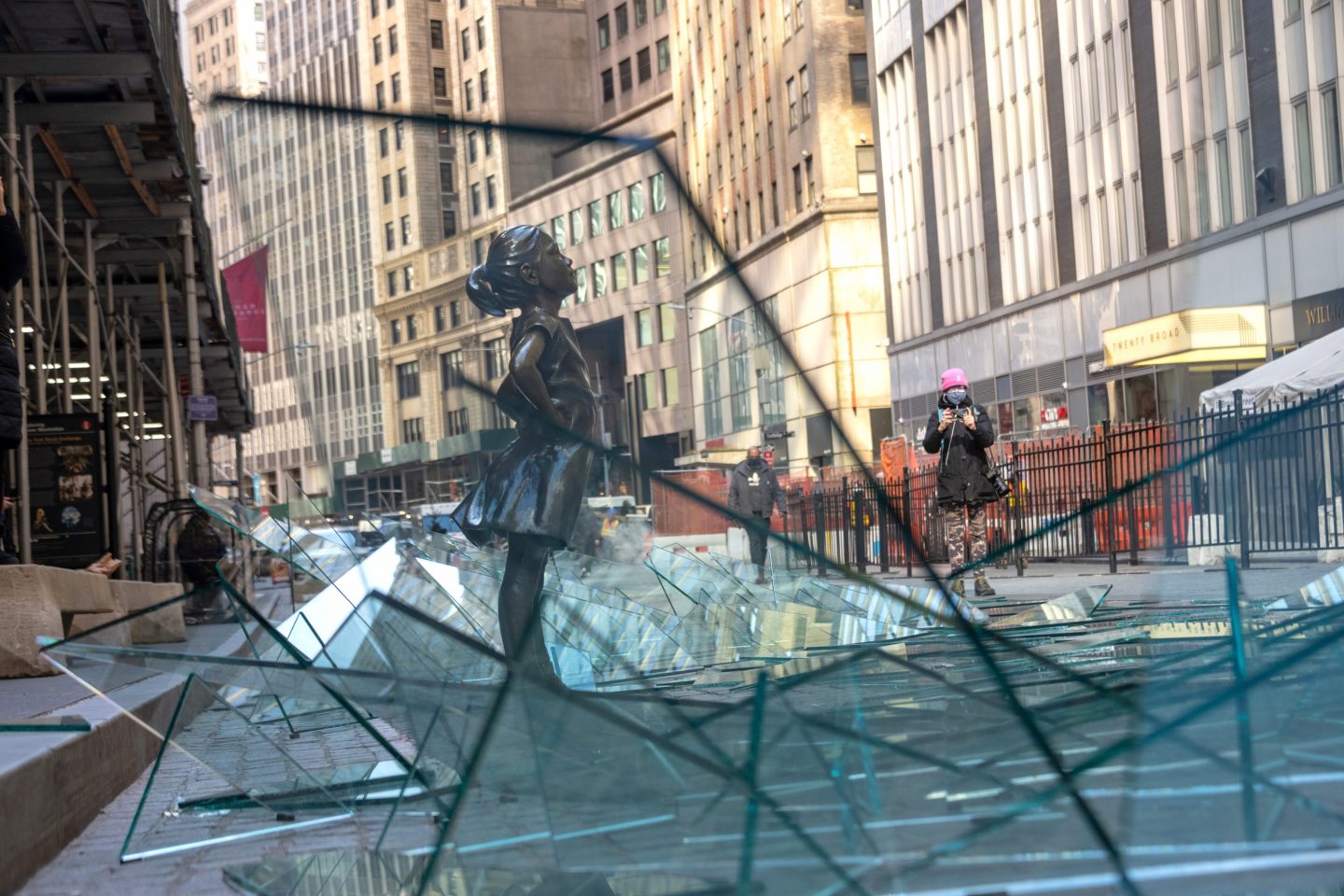 The Fearless Girl Statue is framed by a piece of the broken glass ceiling art installation in front of the New York Stock Exchange on International Women's 2021. Based on that year's figures, white women had to work until 15 March 2022 to make as much as the average man–and women of color are even worse off.
Alexi Rosenfeld - Getty Images

This year, Equal Pay Day is March 15, 2022. That’s 74 days into the year. Based on this inference, it would be safe to assume that the average white woman would “only” need to work an additional 74 days to catch up to the average man in salary.

However, it overlooks the fact that this salary target is from the previous year, without accounting for inflation.

We cannot keep looking at this math in differential terms. We must look at this in total sums: It takes the average white woman a total of 439 days of work to make the equivalent of what the average man makes in 365 days. And let’s not forget that women are already beginning this process at a loss because they are starting with a rolling negative tally from the year before.

The outcomes are even more abysmal when broken down by race. This year, Equal Pay Day for Black women falls on Aug. 3–that’s 579 days to earn the same amount as a man. For Latinas, it’s Oct. 21–so a whopping 658 days.

To illustrate this, imagine you are standing on a track about to run a race. Your competitor is equal to you in ability, stamina, and performance. When the shot fires, he sprints. You, however, are stuck. Your feet are glued to the ground and won’t release until he has done at least a lap and a half. Guess who wins.

To know you are at a deficit before you even begin is demoralizing. Yet, this is the reality that women face. Many women are unaware of how great the disparity truly is. The ones who are aware are faced with daunting choices: to stay quiet and remain on track or speak up and risk losing their job. Some achieve a token victory but are so defeated in the process that they leave the job they so daringly fought for. When this happens, the mark of their achievement goes with them, and office practices go back to the status quo.

The question then becomes, how do we reset the clock to create an equal starting point for men and women? We face two challenges in trying to answer this question.

First, there’s the issue of occupational segregation. In general, women tend to be in lower-paying jobs than men. Then, when women and men are in the same or similar jobs, women tend to be paid less than their male counterparts, even when their qualifications nearly match.

To start to chip away at these problems, we can ensure that women–and particularly women of color–have equal access to and are prepared for higher-paying roles in every company and conduct regular pay audits to ensure that when qualifications and experience are the same, total compensation should be the same regardless of gender, race, or age.

We must also acknowledge that women cannot fix this problem on their own. We need men to ask themselves what they would be willing to do if the roles were reversed. It is easy for men to say time is money when your pay reflects time spent.

For women, there is no such logic. White women are stuck trying to catch up for at least three months every year, and women of color are even further behind.

As of 2021, the World Economic Forum predicted that it would take 135.6 years to reach gender parity. We can’t wait that long. Let’s work together to ensure that we can celebrate both Equal Pay Day and the New Year on the same day much sooner.

Cathrin Stickney is the founder of Parity.org