The U.S. economic stimulus machine is sputtering, but it isn’t broken 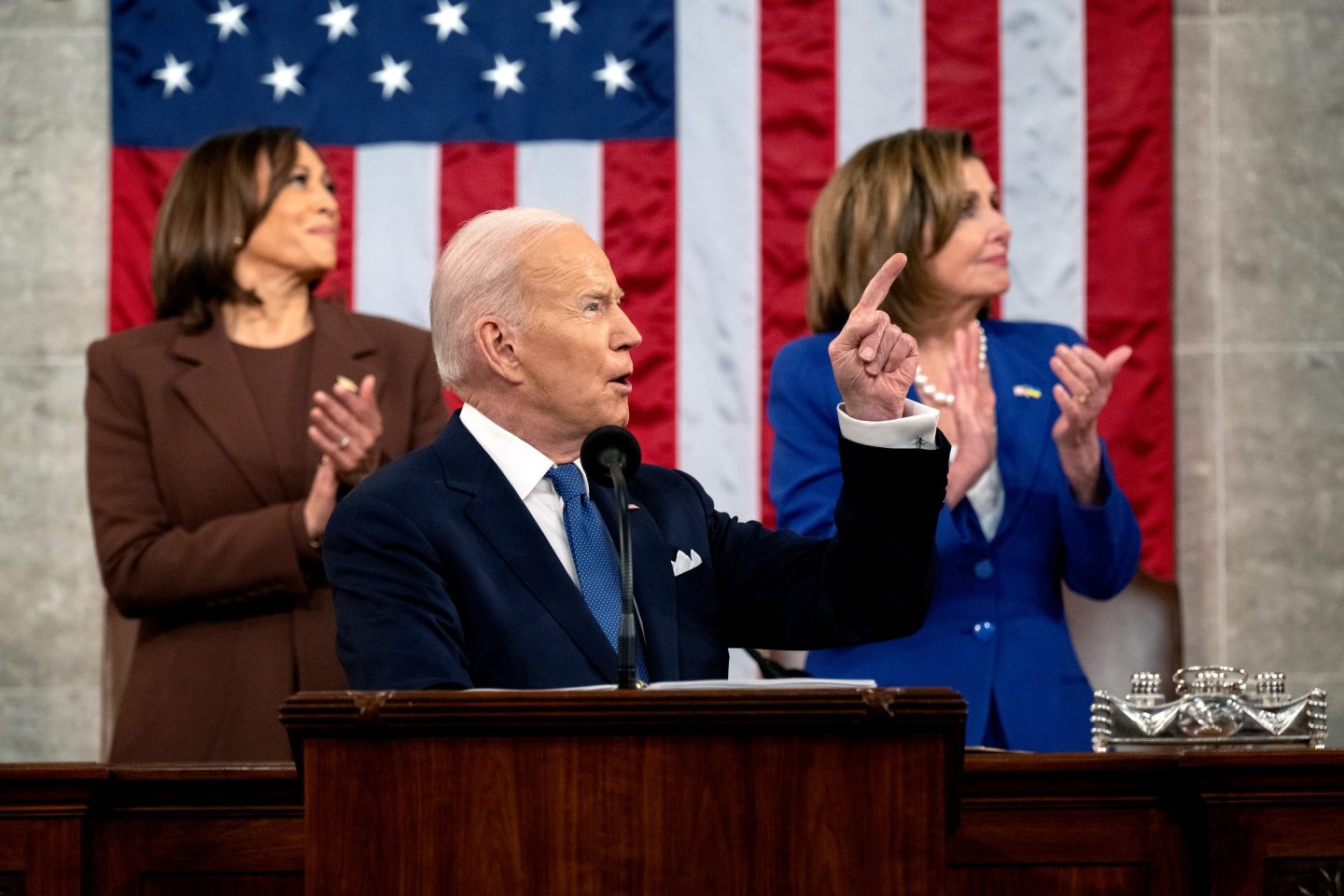 President Biden at the 2022 State of the Union address. Biden's Build Back Better stimulus agenda "has not been shelved because the U.S. government would be unable to raise the money if it wanted to, but because there is not enough willingness to do so," the authors write.
Photographer: Saul Loeb/AFP/Bloomberg via Getty Images

Over the last 40 years or so, policymakers have developed the habit of propping up the economy and markets—almost compulsively—at every turn. That has been true during big turns, such as 2008 and 2020, and small turns, such as in late 2018, when equities sold off 20% and the Federal Reserve duly cut rates to placate markets. It is also true of the perennial political desire to push growth and stretch economic cycles, last seen in the tax cuts passed in 2017, nine years into an economic expansion.

This pattern—call it a “stimulus machine”—has become the operating system of the modern cycle, relied on by investors, firms, and policymakers. But the ongoing upheaval in markets is unfamiliar territory.

The stimulus machine is sputtering because the spike in inflation means the policy rate—the benchmark controlled by the Fed—needs to rise, not fall. Indeed, low and stable inflation is precisely what fuels the machine. For price stability allows fiscal expansion without pushing up market rates, and it also allows monetary policy makers to keep the policy rate low to elongate expansions. Today, the impending rate hike cycle amounts to a defense of that low inflation regime, and stimulus is at odds with that.

It’s easy to forget that powerful stimulus was not always a given. When inflation was raging in the 1970s, markets effectively had veto power over the stimulus plans of politicians and monetary policy makers. President Carter’s 1979 budget is a case in point. It was deemed to deliver a larger than expected deficit, and prompted a sharp market sell-off—and a retracted budget. Stimulus—be it fiscal or monetary—could not be used to juice the cycle because inflation was too high, and markets would not allow it.

But the 1980s saw a powerful confluence of the financial ability and political willingness to embrace stimulus. Paul Volcker’s shock therapy brought down inflation and made fiscal borrowing more acceptable to bond markets; meanwhile, the structural decline in growth rates enhanced the willingness of politicians to lean against sluggish growth.

The result is the remarkable modern era of compulsive stimulus which holds important clues about the feasibility of stimulus today. To gauge today’s constraints on stimulus, we need to differentiate between the machine’s three engines that have emerged.

First, the use of crisis stimulus has been successfully established to halt economic and systemic collapse. Fiscal and monetary policy were used aggressively in 2020, providing a restart to a frozen economy and, astonishingly, leaving the economy on a path to greater output than was expected before the crisis. Crisis stimulus was also used to great, if less visible, effect in 2008 when it prevented a deflationary depression.

Second, pro-cyclical stimulus has become a reliable instrument for politicians. Fiscal efforts to drive forward an already healthy expansion were used most clearly in 2018 when Trump’s pro-cyclical tax cuts boosted a cycle that had been running longer than most. The George W. Bush tax cut in 2003 and the Reagan tax cuts in 1986 were also pro-cyclical—albeit less aggressively so, as those cycles weren’t as far advanced at the time. The most recent use of pro-cyclical stimulus is Biden’s American Rescue Plan Act of early 2021, which pushed an economy that was recovering well even harder and tempted forth the inflationary overshoot we’re going through now.

Third, cycle insurance stimulus has emerged as the most tactical stimulus engine. Most recently, the habit of injecting stimulus at the first sign of economic weakness was on display when the Fed walked away from more hikes in late 2018, as markets balked at higher rates; the Fed even cut the policy rate in 2019. Other examples: The Fed’s insurance rate cuts of 1998, when fears of contagion from the Asian Financial Crisis, the Russian default, and the collapse of LTCM frayed nerves even as the domestic economy was healthy; or the insurance cuts of late 1987 in response to the equity market earthquake, again with a healthy economy as backdrop.

Today feels like a rude awakening, given that the machine’s omnipotence and hair-trigger use was on display only a short while ago. Markets are in a sell-off, but rate hikes have accelerated. The economy is slowing, but fiscal policy has become a headwind rather than tailwind. Is the future one without the stimulus machine?

Realistically, it is only the machine’s third engine—cycle insurance stimulus—that is clearly out of service. The hair-trigger ability of monetary policy to respond at any sign of market worry, or growth slowdown, is suspended, as it must get ready to defend the inflation regime. To be clear, some insurance ability remains, and could be used if new risks emerge, but it would be an unwise and risky bet to juice the economy at the first sign of trouble without clear evidence that inflation was normalizing.

Meanwhile, pro-cyclical stimulus, the machine’s second engine, is sputtering audibly today. Yet it is sputtering not because of financial constraints but because of political willingness, which is held back by Democrats’ razor-thin congressional majorities and inflation fears. Build Back Better has not been shelved because the U.S. government would be unable to raise the money if it wanted to, but because there is not enough willingness to do so.

Fortunately, crisis stimulus—by far the most important engine—remains very strong today. If it was needed tomorrow—in the case of another significant shock—the capacity of both fiscal and monetary authorities to respond remains strong. How do we know? The safe-haven properties of U.S. debt remain intact—rallying in times of stress and uncertainty that weigh down risk assets such as equities. That property remains a powerful signal of the U.S. ability to deploy crisis stimulus when needed.

Do we need and want the stimulus machine?

An overuse of the stimulus machine has meaningfully contributed to the inflation spike that is complicating the current outlook—and it played a vital role in each of the two recessions preceding COVID-19 (the dot.com bust and housing crash). It is also easy to imagine that all the stimulus, all the debt, all the bubbles will eventually deliver very bad outcomes. Does it make sense to live with such a machine—or should it be shelved?

Here too we must look at the machine’s three engines separately to assess what the consequences of putting them down would be.

Crisis stimulus remains indispensable. Putting it down would be returning to a 19th century view of economic management and an extraordinary folly. When faced with economic crisis, abandoning the Keynesian intellectual tradition would be tantamount to begging for the truly big crisis—a deflationary depression. This primary engine of the stimulus machine must not be set down, ever.

By contrast, setting aside pro-cyclical stimulus could be smart if done at the right time and the right way. Wiser use, such as for infrastructure investments, could make the stimulus machine more effective with less risk of overshooting, inflation, or bubbles. However, the challenge here is not chiefly intellectual, but political: Politicians see the stimulus machine as serving their objective of re-election, not as a tool of economic management.

Finally, setting down cycle insurance, the third engine, would raise cyclical risks but also offer benefits. The use of hair-trigger stimulus to counteract signs of economic weakness would be diminished, making recessions and therefore shorter cycles more likely. However, risk assets would be less guided by the assumption of policy rescue and thus less likely to drive financial bubbles and associated crises that tend to deliver more painful recessions. On balance, having the ability to insure against imminent risk is desirable, but it requires judicious use.

Today the stimulus machine is not broken—its crisis stimulus engine remains very strong—but it has shifted down a gear as inflation changes its political and economic context.