In an age of remote work, the office romance can still bloom 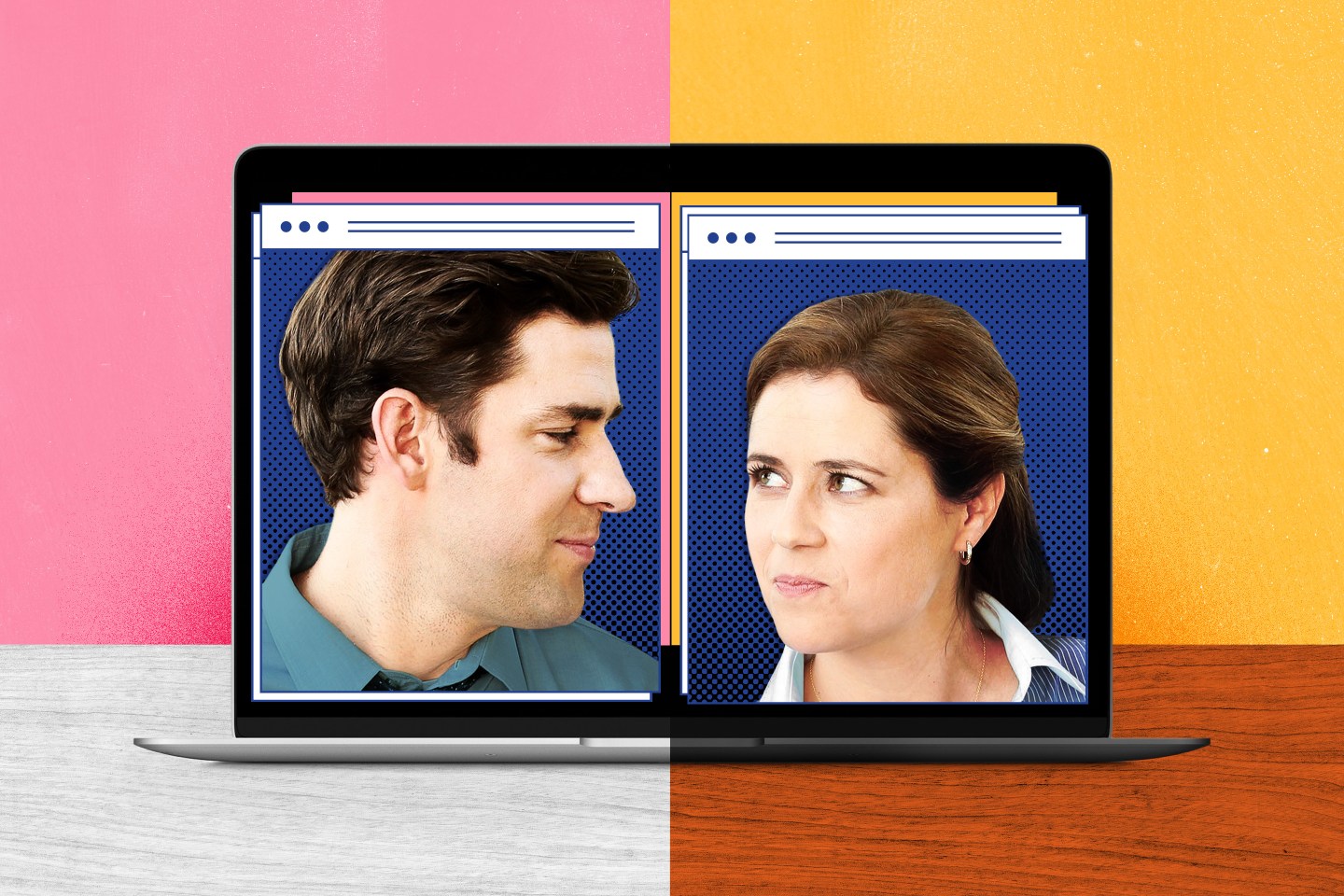 When Rihanna sang that she found “love in a hopeless place,” she wasn’t talking about a Zoom happy hour, in which coworkers struggle to make small talk in an effort to do a little virtual team building. But while the pandemic has changed a lot about the way we work, surprisingly, it hasn’t killed the office romance.

If you can do it right—i.e., it doesn’t interfere with your job or cross obvious ethical boundaries—your workplace is arguably a good place to build a connection with a potential romantic partner.  Just ask Barack and Michelle Obama. And it’s not as taboo as you might expect: 52% of respondents to a 2018 Vault.com survey admitted to having had at least one office romance during their career, and 78% said they’d be open to doing it again. After all, in your postgrad life it can be hard to meet people outside work, so it makes sense that it’s a dating pool for many.

“The fact that you’re not supposed to be doing it makes any kind of romance exciting,” Lindsey Metselaar, host of We Met at Acme, a dating and relationships podcast, tells Fortune. “With a coworker, you’re kind of sneaking around.”

But with so many people working from home, in many ways, it’s more difficult than ever to connect with your coworkers. We’ve lost the opportunity to exchange furtive glances over cubicles or bump into a crush at the elevator bank. And yet, people are still finding and building these romances, even if they start out virtually.

Jade, 25, a sales representative at a management services company, met her boyfriend, C, in June 2020. She had just joined the company, which was fully remote at the time.

“My manager asked me to reach out to some people on my team to get the best sales tips and see what they’re doing,” Jade says. “I reached out to C, he gave me his cell number, and we talked for 40 minutes and hit it off.”

At first, Jade didn’t want to get involved with anyone because she was so new to the role. But they began dating after meeting up in person with a larger group of friends over the summer of 2020. The couple didn’t work together in person until they returned to the office in the summer of 2021.

While Jade’s boyfriend—whom she now lives with—left the company a few months ago, they were on the same team the whole time they were dating, and she says everyone knew.

“When there’s a lot of young people in a work environment—especially if they’re on different teams—I don’t see anything wrong with it,” she says.

Hannah Fenlon, a senior at Columbia University, met her boyfriend two summers ago when they were the only two interns at a financial services firm.

“We were introduced during the first team meeting,” Fenlon, 21, says. “We worked under two different bosses, so we didn’t have many projects together, but we did a few training modules together and set up different Zoom catch-ups about our projects over the summer and really got to know each other.”

After the summer, the two talked for a year as friends, catching up frequently about their classes and internship searches.

“I think it would be tricky to date someone you have to work with every day,” says Fenlon, who graduates in May. “For us, it was helpful that we only briefly got to know each other for a few months over the summer. Maybe, because we’re in similar industries, we’d work together again if it were at a larger company, but I haven’t had to cross that bridge.”

Not all office romances are created equal. It’s best to tread lightly in order to avoid power imbalances and/or unwelcome advances. For every fairy-tale ending, there’s a horror story.

“We have to be realistic that office romances will happen,” says Colleen Tucker, who has worked in HR for over a decade and is currently VP of people at tech startup Bubble. “It could be problematic, depending on a person’s role in the company. Usually, you need to disclose the relationship to HR.”

Company size is a big consideration when it comes to the permissibility of an office relationship. “If it’s a small company, that can really affect dynamics,” Tucker says. “Another thing to consider is how closely two people who are dating are working together. Are they on the same team? Do they share projects?”

Over the years, Tucker has worked with a number of people in relationships, and it hasn’t been disruptive because they worked in different departments, and there was no power dynamic. “When in doubt, get advice from a trusted friend, or go to HR,” she recommends for those wondering if their relationship is kosher. “If you have a sense or a sneaking suspicion something is crossing a line, follow your intuition.”

When you have to choose between work and love

Coworkers who are on the same team or working for a small company may find themselves facing challenges in which they need to involve HR or their higher-ups, and it might ultimately lead to some hard decisions.

“At some point, if the relationship is going to be long term, you have to talk about who will leave the job, because you don’t want to work together forever,” Metselaar says.

In October 2020, Claudia, who asked not to share her last name to protect her identity, started a new job as a manager at a small startup. She was the company’s 12th employee, and only its third female worker. She got to know her coworkers—including her future boyfriend, a senior manager who didn’t work on her team—exclusively over Zoom and Slack.

Being remote allowed Claudia and her partner to get to know each other much faster than if they were working in person, she says. They went back to the office in May 2021, and the two officially began their relationship two months later.

“Talking about work, we ended up forming a really close relationship, and because we weren’t in an office, the lines were a little more blurred,” she says.

Claudia and her boyfriend told their CEO they were dating, in an attempt to be transparent. (The company had no HR department.) But the CEO was unhappy about the relationship, which led to a “traumatic couple of months,” Claudia says. As a result both she and her boyfriend have since left the company.

Despite the career drama, Claudia says she doesn’t regret her decision. “I would do it all over again.”