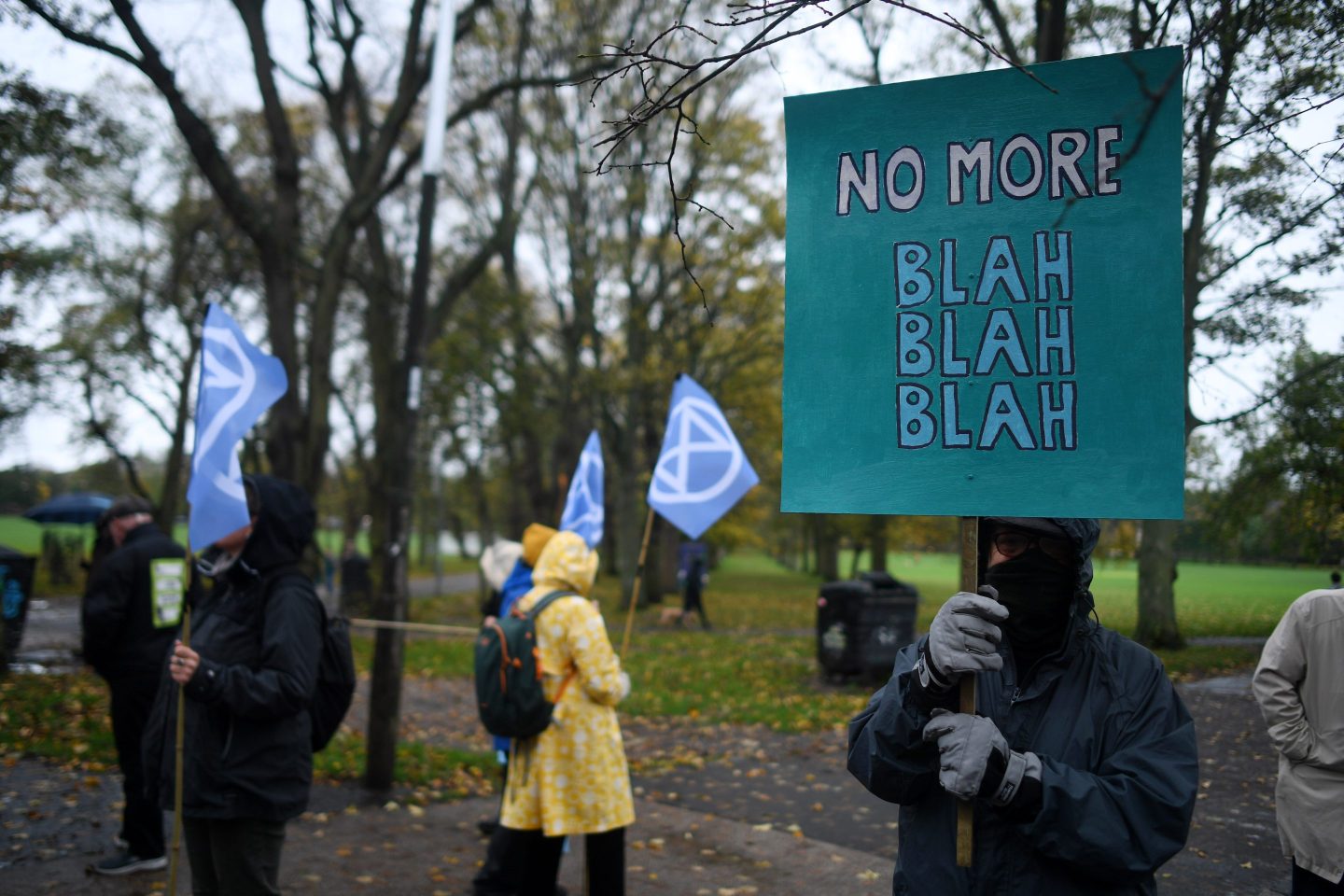 Protesters take part in a Stop Climate Horror march on Oct. 31, 2021, in Edinburgh. “At some point, CEOs are going to start asking why they need to disclose the political risks of policies that have failed to gain democratic support for decades,” writes Richard Morrison.
Peter Summers—Getty Images

Advocates of environmental, social, and governance (ESG) investing seem to have good reason to be optimistic these days. Virtually every day, another news story explains the upward trajectory of assets managed “according to” or “consistent with” an ESG framework. Corporate leaders will no doubt be under even more pressure to embrace the responsible investing movement this week, as heads of state convene for talks at the major United Nations climate conference, COP26, in Glasgow.

But much of this momentum is built on the idea that public policy changes will soon shift ESG goals from voluntary to mandatory. That assumption, while widely shared, has a shaky basis. Understanding that will be vital for both skeptics and proponents of ESG goals going forward.

The term ESG covers a wide range of policies and topics, but the most high-profile and frequently invoked is climate change. Data and analysis focused on “green” and “sustainable” business is itself a huge industry. Consulting firms and investment managers often refer to climate-centered investing as “an unstoppable force,” and the UN-affiliated Principles for Responsible Investment insist that there will be an Inevitable Policy Response by governments around the world in the form of stricter climate regulations.

In that view, CEOs and senior managers have to get on the ESG bandwagon today, because carbon taxes, emission limits, disinvestment drives, and other initiatives to disadvantage oil and gas companies—and potentially strand fossil fuel assets—are right around the corner. And those new laws and regulations will fall especially hard on any firm that hasn’t already come up with a preemptive compliance plan.

But despite the hype, the kind of U.S. climate policies that companies supposedly need to accommodate have been slow to materialize. In fact, the type of policy “progress” that climate activists are predicting has repeatedly been rejected over the past quarter of a century. In 1997, the U.S. Senate unanimously approved the Byrd-Hagel Resolution by a vote of 95-0, calling for the rejection of the Kyoto Protocol climate treaty, which President Clinton signed but was never ratified. Senators John McCain (R-Ariz.) and Joe Lieberman (D-Conn.) introduced three successive Climate Stewardship bills in 2003, 2005, and 2007. They all failed. A similar defeat greeted the Lieberman-Warner Climate Security Act in 2008 and the Waxman-Markey American Clean Energy and Security Act in 2010.

Later, under President Obama, the Environmental Protection Agency proposed an ambitious program to regulate carbon emissions from the power sector, the Clean Power Plan. This was part of Obama’s 2014 boast that he would pursue a program of unilateral executive policymaking via “pen and phone.” The CPP was replaced, however, when the EPA implemented the Affordable Clean Energy rule in 2019. (The final status of the ACE rule is still being litigated in federal court.)

Whatever we might think of this legislative and executive policymaking record, it is not an example of inevitable triumph. And it is not just a case of the United States being an outlier. Australia implemented a national carbon tax in 2012. It was gone by 2014. The yellow vest protests in France were sparked by rising fuel prices, largely driven by climate-focused energy taxes. When President Trump announced his plan to withdraw the U.S. from the Paris climate treaty in 2017, it had been signed by 195 nations. Yet as of September 2021, not a single G20 nation had adopted a climate plan that is in line with the treaty’s goals.

All of this indicates that the risks that ESG advocates warn CEOs about managing are largely political, not actual climate risks. Exxon Mobil having to deal with a carbon tax imposed by Congress is a political (and financial) risk. Having a beachfront hotel physically damaged by rising sea levels is a climate risk. It could take decades for global climate change to significantly affect long-term physical investments, but a new law or tax could take effect immediately.

Which means that policy advocates are engaging in a kind of circular bootstrapping. The Securities and Exchange Commission, for example, is likely to issue new rules on climate disclosures by public companies. But the biggest and closest threats are future liabilities from greenhouse gas policies that don’t yet exist, have not worked internationally, and have been repeatedly voted down in Congress or repealed administratively.

At some point, CEOs are going to start asking why they need to disclose the political risks of policies that have failed to gain democratic support for decades. The promoters of ESG investing would be wise to craft a compelling answer.

Richard Morrison is a research fellow at the Competitive Enterprise Institute.