Is America about to our blow our best—and perhaps last—chance for paid leave? 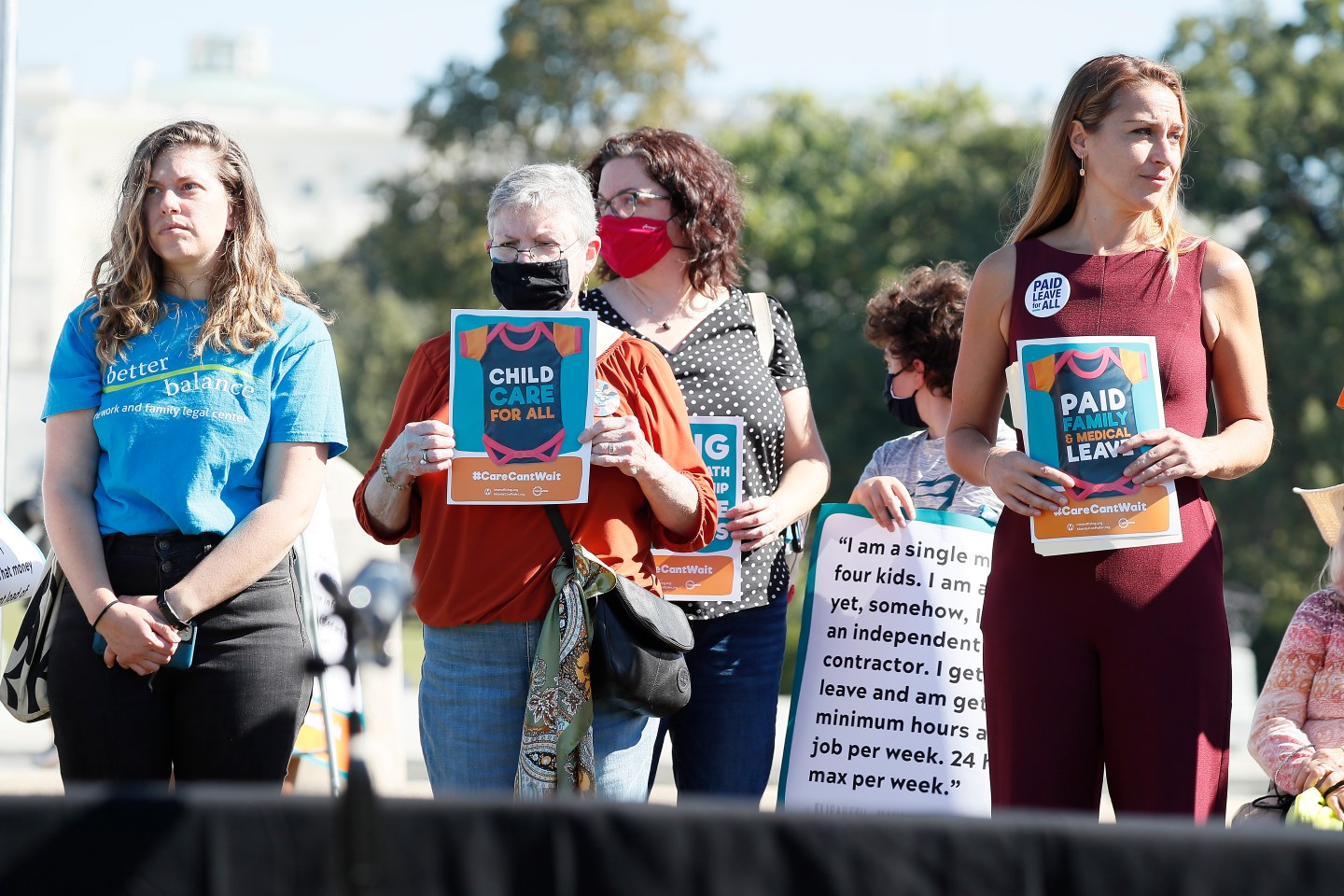 Advocates of the Build Back Better act in front of the U.S. Capitol.
Paul Morigi—Getty Images for MomsRising Together

Good morning, Broadsheet readers! Rent the Runway’s Jennifer Hyman talks IPO, Letitia James is poised to make a bid for New York governor, and it looks like America’s best chance for paid family leave is slipping away. Have a productive Thursday.

Leaving out leave. Will the U.S. ever escape its humiliating distinction as the only rich nation in the world that fails to guarantee its citizens paid family leave?

Yesterday, it looked as if that moment might actually be at hand, as the Democrats’ domestic policy bill seemed to be inching through the final stages to approval. Then, late in the day, the news began to trickle out that the paid leave provision may be sacrificed in an attempt to win over West Virginia Sen. Joe Manchin, a Democrat, who has publicly wrung his hands over the nation’s ability to fund it. (Manchin also torpedoed his party’s plan for a “billionaire tax,” one of its strategies for how to cover the cost of such programs.)

As of this morning, the fate of the leave provision is still uncertain. New York Sen. Kirsten Gillibrand, who has been the measure’s lead proponent in the Senate, says she and other supporters will continue to fight, but its prospects are dim.

If this modest leave proposal (the latest is down to four weeks from President Biden’s initial proposal of 12) can’t make it through a Democratic Congress, it’s hard to imagine we’ll see it happen in the foreseeable future. The vast majority of Americans support some form of paid family leave. If we can’t pass such a proposal now, after the pandemic cast the essential role of working caregivers into such sharp relief, is there anything that could convince lawmakers that paid leave isn’t just a social policy—it’s also an economic imperative?

The New York Times recently pointed out that four weeks would hardly be impressive, but as Stanford economist Maya Rossin-Slater told the paper, “Any leave is better than zero leave.” The research is clear—allowing parents to recover after childbirth and spend time with their new baby leads to better health outcomes for all involved. One stat that Gillibrand has been sharing with colleagues: women with access to paid family leave are 40% more likely to rejoin the work force after having a baby. Right now, the people who get to realize those benefits are the ones with high-paying jobs that provide leave (or who live in one of the nine U.S. states that guarantee it). The Americans who miss out are those who would most benefit, low-wage workers—who are also less likely to have good insurance or the means to afford unpaid leave or hire the childcare support they need to get back to their jobs.

As Lelaine Bigelow, VP for social impact and congressional relations at the National Partnership for Women & Families, put it in a statement released last night: “We are deeply concerned about reports that paid leave has been removed from the Build Back Better package. Paid leave is one of the most popular components of the package and leaving it out is a missed opportunity to advance a transformational care agenda that addresses the full range of challenges that women, especially low-income women and women of color, are facing.”

To see this opportunity slip through our fingers would be a tragedy for us all.

- Milestone moment. Rent the Runway shares started trading on the Nasdaq on Wednesday after the Jennifer Hyman-run company raised $357 million in its IPO. Hyman told Fortune's Maria Aspan in a new interview that she hopes the debut is "a step forward for all women-led companies." Fortune

- In the running. Letitia James, New York's attorney general, is expected to announce a run for governor as soon as Thursday. James, whose investigation into sexual harassment claims against Andrew Cuomo led to his resignation, would likely face Cuomo's successor, Kathy Hochul, in a Democratic primary next year. If elected, James could be the U.S.'s first Black woman governor. New York Times

- Target of trolls. In 2019, Meghan, Duchess of Sussex, said she was the "most trolled person" in the world. Now, a new report by Twitter analytics provider Bot Sentinel says she and Prince Harry were the target of a coordinated, human-generated hate campaign on the platform. Washington Post

- Scared away. Blackstone founder Stephen Schwarzman admitted this week that women used to be "scared" of working at the private equity firm. The company tried to address the problem by inviting female college students to visit the firm and experience its culture as a means of recruitment. Women now make up half of Blackstone's hires, up from 10% in 2015. Bloomberg

- Back to work. Of women who left the workforce in the pandemic, two-thirds plan to return, according to a new MetLife report. But they don't want to go back to the pre-COVID status quo. More than three-fourths want more flexibility at their current or future employer. CNBC

A patriarchal tradition that just won’t budge The Atlantic

“The criticism women candidates hear most often is definitely, ‘How come she doesn’t do as she’s told?’”

- Maiko Takahashi, a 33-year-old former journalist and mother, who's running for a seat in Japan's male-dominated Parliament.