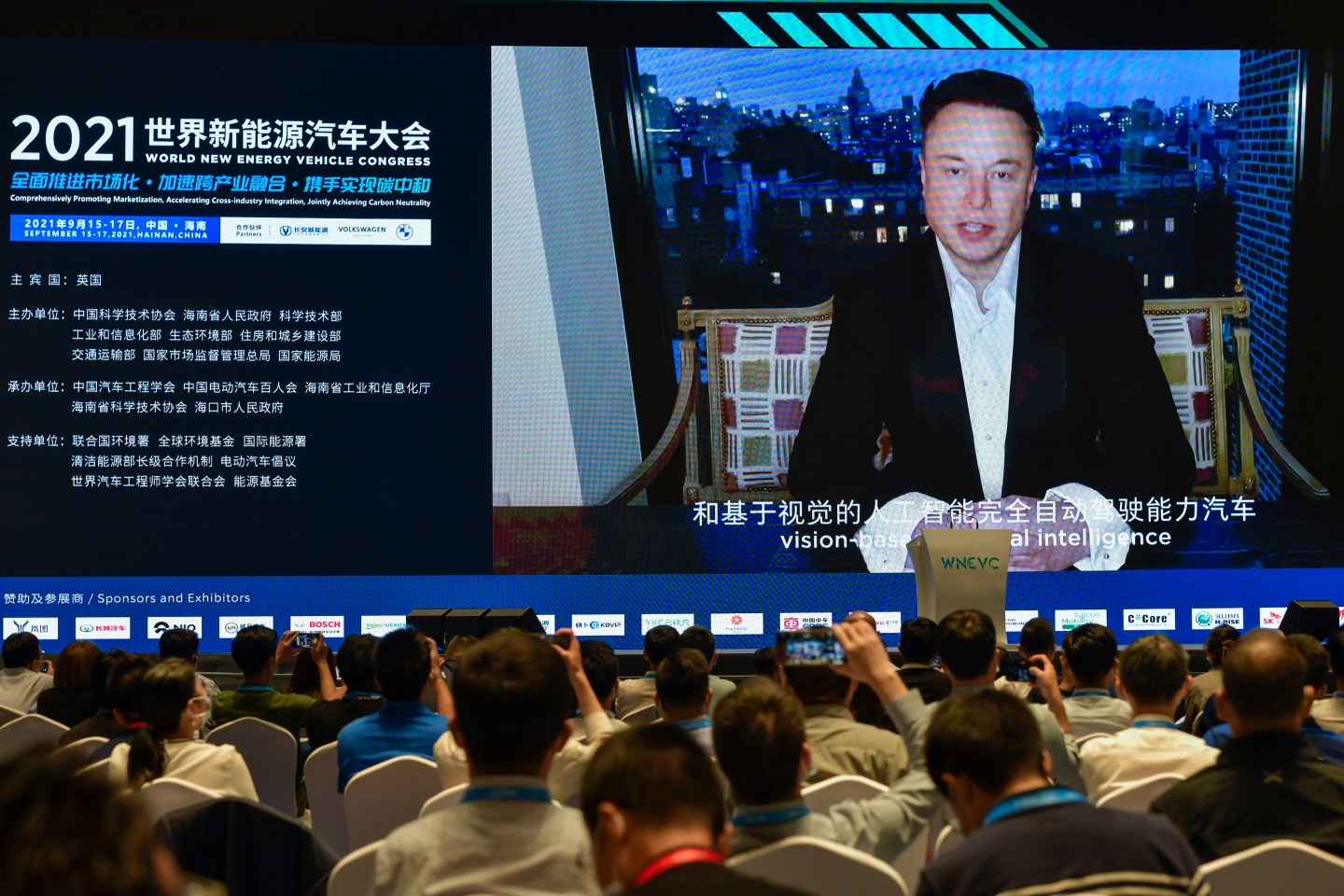 Right around the time the pandemic hit China in January 2020, Elon Musk was gyrating wildly onstage in Shanghai to celebrate the first Model 3 Teslas rolling out of the company’s gigafactory there—where Musk aims to produce a million electric vehicles a year.

But what goes into making them is less cause for celebration, according to some environmentalists and human-rights activists on opposite ends of the world.

In two reports from China, and in one resolution from U.S. investors that is up for a vote at Tesla’s annual shareholder meeting next week, groups examining the company’s global supply chain allege that Tesla faces both environmental risks in China, and possible child labor use in Africa.

Tesla’s suppliers are hardly chosen for their pristine environmental record, according to two recent reports from Beijing NGO Institute of Public and Environmental Affairs, or IPE.

IPE spent months tracking fines imposed by local authorities, and found several reported Tesla suppliers who had committed serious violations. Of the 42 companies examined, 14 had been fined, some repeatedly, for spewing hazardous chemicals into rivers and wastewater systems, or overshooting legal limits on air pollution. These include several factories whose parent companies Tesla lists on its website as suppliers for Giga Shanghai. Tesla said last year that 86% of materials for its China-made vehicles are sourced within the country, where Tesla has the first fully foreign-owned car factory.

“Instead of playing a positive role, Tesla has repeatedly refused to confront the environmental violations in its supply chain in China in an extremely arrogant manner,” IPE’s report says.

Not so, says Tesla. In an email to Fortune on Wednesday, the company says it rolled out a “green supply chain” plan this year to track its Chinese suppliers, and has made it clear they need to adhere closely to Tesla’s environmental code. “If any violations are identified, especially environmental violations, we will require them to rectify within a time limit,” the company says. Tesla, which notes that some companies on the IPE list are not its suppliers, says it has drawn up the first list of high-risk suppliers for auditing.

IPE claims there are numerous problems. The suppliers are involved in all the parts that make up Tesla models, including the interiors, IPE’s green supply chain manager Shanshan Ding told Fortune from Beijing. “Some had to do with structural parts in lithium batteries, others with molding and the aluminum wheel,” she said. “Each one of them had different kinds of violations.”

In one case, a lithium-battery manufacturer supplying Tesla, situated on the Yangtze River, was fined $22,500 for dumping wastewater containing chemical oxygen demand, or COD, at a level seven times higher than the legal limit. In another case, a company making die-casting accessories for Tesla’s aluminum alloy repeatedly violated environmental regulations between 2019 and 2021, including by dumping wastewater into a storm drain, and was fined a total of $115,000.

Tesla is not alone in facing these issues—China’s booming EV companies like Nio and the Warren Buffett-backed BYD Auto do business with many of the same suppliers. What’s more, they have been steadily chipping away at Tesla’s market, since Tesla was hit with a barrage of bad press over data privacy and being a potential risk to national security. Tesla demand in China was “pretty anemic,” Tu Le, founder of Beijing consultancy Sino Auto Insights, told the Financial Times last month.

But Tesla remains the world’s biggest EV company by far. And so IPE believes it has a special obligation to act on supply-chain risks. “Tesla’s avoidance and silence make it disputable whether it has achieved its environmental commitments,” its report says.

It will be harder for the company to remain silent at its annual shareholder meeting (online) on Oct. 7, where investors will vote on another hot issue: child labor. A resolution filed by activist investors demands that Tesla appoint an independent organization to end all child labor in its supply chain. A similar resolution at Tesla’s annual meeting last year won 24.8% of the votes.

At issue is Tesla’s reliance on cobalt from the Democratic Republic of the Congo, which produces more than 60% of the world’s supply of the mineral, crucial for making lithium batteries. A desperately poor country, the DRC is beset with grand-scale corruption and endemic child labor in the mines, where underage workers earn pennies a day in the backbreaking work of digging and hauling cobalt.

Musk, who has said Tesla will eventually produce no-cobalt batteries, has a contract to buy at least 6,000 tons of cobalt a year from Glencore, the world’s biggest cobalt trader, which has extensive mines in the DRC. Glencore denies it uses underage miners. And last year, Tesla filed a motion to dismiss a lawsuit in U.S. federal court in Washington, D.C., charging that the company, as well as Apple, Dell, and other tech giants, were aiding and abetting child labor in the cobalt mines; Tesla argued that it could not reasonably control the operations of mining companies thousands of miles away.

Even so, the company has, on paper, a no-tolerance policy toward child labor, saying that it has visited many DRC mines and scrutinizes companies seeking its business. “Tesla does not, and will not, tolerate the use of slave or child labor in the manufacturing of its products,” says its conflict-minerals policy.

But the investors’ resolution up for a vote next week says Tesla is trying to have it both ways: arguing that conditions in the cobalt mines are beyond their control, while also stating that it does not tolerate any child labor.

“They could be doing more to make sure they implement their no-child-labor policy,” said Gina Falada, senior program associate for Investor Advocates for Social Justice, the faith-based group that filed the resolution. “They talk about no tolerance of child labor, but there’s no evidence to show they are effectively implementing that policy,” she added. “Companies have a responsibility to ensure that their suppliers are meeting their standards on human rights.”