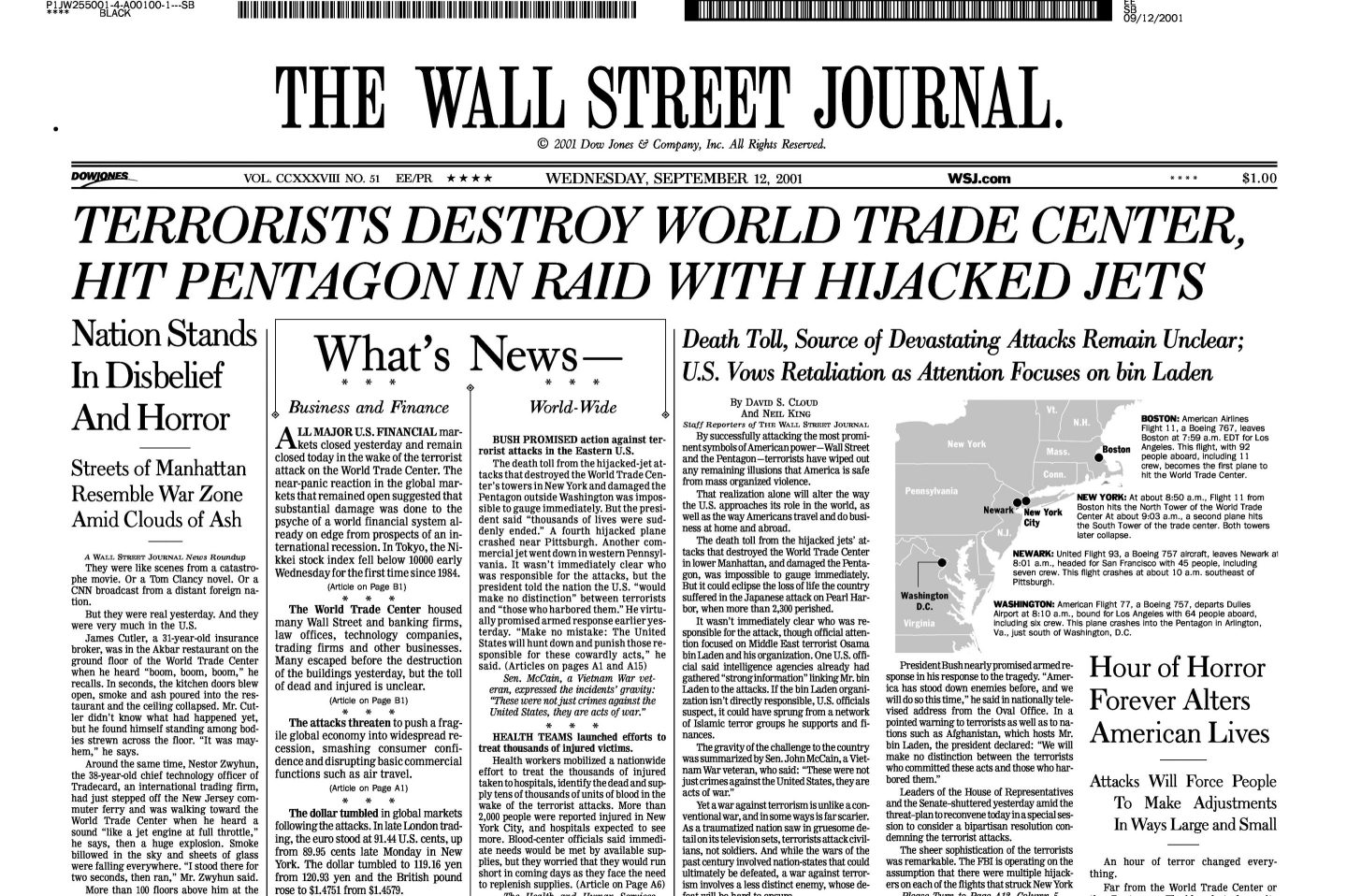 The front page of the Wall Street Journal’s Sept. 12th, 2001, edition, which won a Pulitzer Prize for breaking news reporting.
Courtesy of the author

The Wall Street Journal won a Pulitzer Prize for its deadline reporting on the Sept. 11th terrorist attacks 20 years ago. The prize judges cited the paper’s “comprehensive and insightful coverage executed under the most difficult circumstances.”

Those circumstances included the near-complete destruction of its primary newsroom, located just across the street from the World Trade Center. When the Twin Towers collapsed, the Journal’s headquarters suffered such severe damage from smoke and falling debris that it would take nearly a year until the paper’s reporters and editors could return.

Moreover, on arguably the most important news day since the Dec. 7, 1941, attack on Pearl Harbor, the Wall Street Journal faced a serious, transient leadership vacuum.

For much of the morning, Paul Steiger, the paper’s 59-year-old managing editor and its journalistic North Star, was missing and feared dead. Caked in dust and debris, his cell phone inoperable, Steiger joined thousands of others who fled on foot to the southern tip of Manhattan. Eventually, he boarded a city evacuation bus that dropped him near his Upper East Side apartment, where, in the early afternoon, he reconnected with his wife and his widely dispersed team.

None of Steiger’s four deputy editors were able to make it to the paper’s emergency backup site in South Brunswick, N.J., 50 miles to the southwest. Peter Kann, the CEO of Dow Jones & Co. and the Journal’s publisher, was in Hong Kong on business.

For all the accolades that the nation’s business daily of record received for its 9/11 reporting, the Journal let one of the most obvious and remarkable news items of that tragic day go unreported: the paper’s own ordeal and its inspiring comeback.

Behind the scenes of the Wall Street Journal’s Sept. 12, 2001, edition—featuring an iconic, six-column front-page headline for only the second time in the paper’s history—can be found four guiding principles applicable to all corporate executives and managers. An examination of the paper’s performance on 9/11 not only offers timeless insights on how to prepare for a catastrophic emergency but also highlights the elements of a corporate culture that will lead to greater success 365 days a year.

The reason that the traumatized and widely dispersed staff of the Wall Street Journal was able to report, write, edit, print, and deliver a newspaper on the morning after the terrorist attacks rested with a deeply rooted management style and corporate values that predated 9/11 by decades.

The salient features are these:

In The Power of Agency, the 2019 book by psychologists Paul Napper and Anthony Rao, the pair wrote that their extensive research led to one conclusion above all others: “We observed a link between people’s general confidence and their ability to meet significant challenges,” even in highly pressured situations.

Years before 9/11, Steiger and his team fostered just such a sense of agency among the Journal’s employees.

When the need arose, Journal staffers didn’t have to be told what to do. On their own, they reasoned how they could be most helpful, and they set about it. In many instances, that meant stepping outside their assigned roles and filling in for others who were unavailable.

While Steiger deserves credit for his management prowess, he would be the first to acknowledge that it wasn’t “invented here.”

The character of the Wall Street Journal dated back at least to the newsroom reign of Bernard “Barney” Kilgore, who beginning in the early 1940s reinvented the Journal—then a failing 33,000-circulation trade paper. Kilgore instilled a work ethic and set of professional tenets that were passed on and reinforced by a long line of successive newsroom leaders up to and including Steiger.

The concept of agency—reacting effectively to immediate situations and planning for the future—and resilience are deeply anchored in the broad American persona.

David F. Winkler, a historian with the nonprofit Naval Historical Foundation, traces their provenance to the earliest days of our nation, as exemplified by Capt. James Lawrence, who was mortally wounded off Boston’s coast during the War of 1812.

Capt. Lawrence’s final order to the crew of his crippled USS Chesapeake was “Don’t give up the ship.”

Observes Winkler: “That the staff of the Wall Street Journal overcame tremendous obstacles to publish the next day’s edition on time speaks volumes of a corporate culture and professional ethos and the vital contribution the fourth estate brings to the viability of the grand American experiment.

“For those who played a role in getting the Journal’s Sept. 12th edition out, they can take pride for the rest of their lives that when they were tested, they did not give up the ship.”

Dean Rotbart is a former reporter and columnist with the Wall Street Journal. His book, September Twelfth: An American Comeback Story (TJFR Press), details the paper’s remarkable effort on 9/11 to produce a next-day edition despite seemingly insurmountable obstacles.