How GM plans to achieve its emission targets 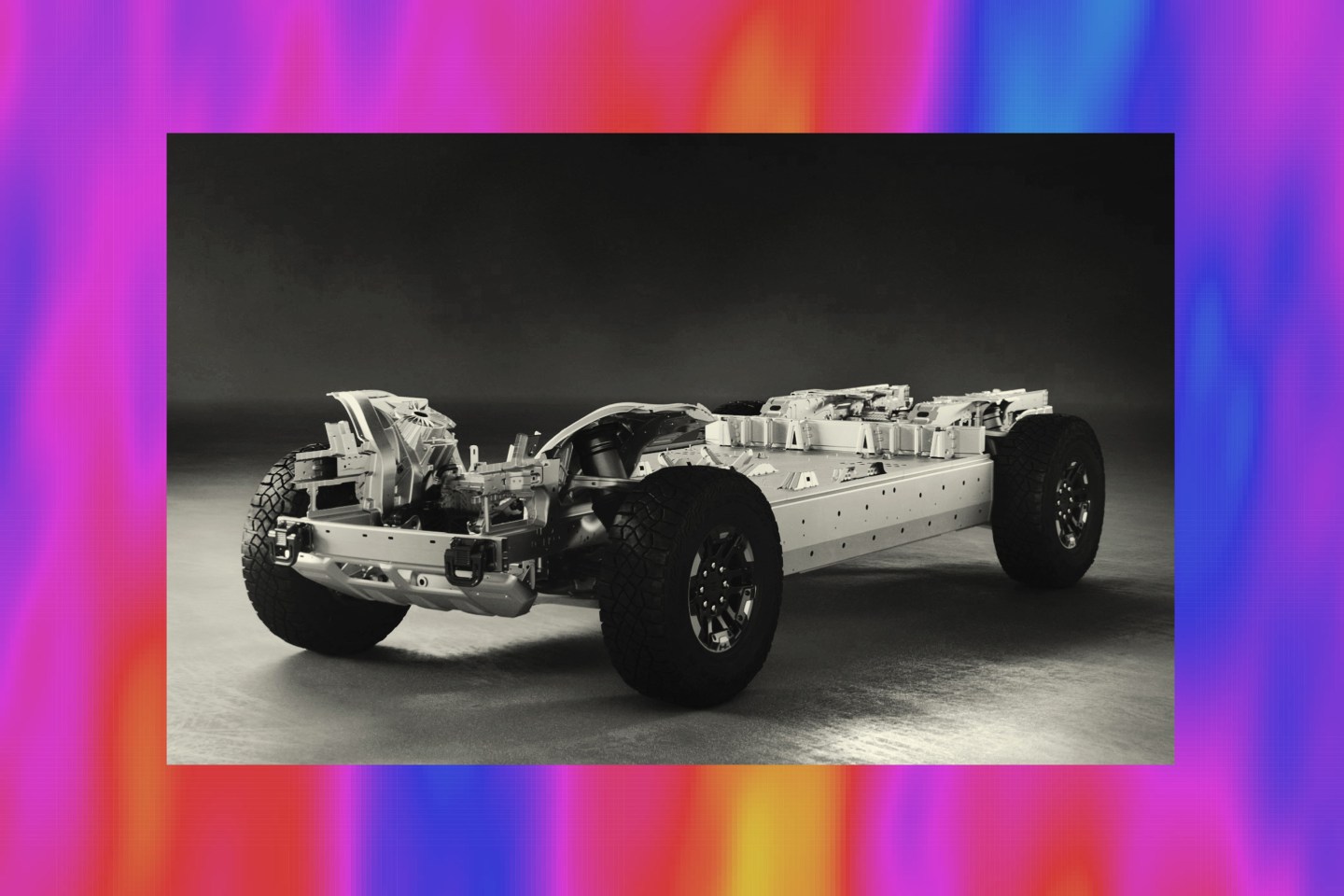 The Ultium platform is the foundation of GM’s EV strategy, which includes the battery cells, modules and pack, drive units containing electric motors and integrated power electronics.
Courtesy of GM

More than 13,000 suppliers, around 277,000 materials and services purchased each year, spending on the order of $72 billion: Just a glance at the numbers involved with the supply chain of General Motors can quickly induce vertigo.

The iconic automaker, which is the fourth-largest producer of motor vehicles after Volkswagen Group, Toyota, and Renault-Nissan, has set some of the most ambitious emissions targets in the industry. The company announced its plan to be carbon neutral in its operations by 2040 earlier this year.

Meeting these goals will require an all-hands-on-deck approach across operations, design, engineering, and procurement. Change of such scale and type at a manufacturer its size has never been done before—because it has never been tried.

And when it comes to sustainability, the size, length, and complexity of a company’s supply chain—all the elements that feed its operations so it can make its products—can be even more important to achieving these targets.

“Supply-chain emissions are on average 11.4 times higher than the direct emissions for a company,” said Simon Fischweicher, head of corporations and supply chains for CDP North America, the world’s largest environmental disclosure network.

Becoming fully carbon neutral is a slippery concept that relies on offsetting emissions by such methods as planting trees or avoiding deforestation, and many environmentalists criticize it as a poor substitute for going carbon-free.

GM’s sustainability report for 2020, released on April 30, laid out the company’s goals to reduce emissions and other environmental impacts, with elimination of tailpipe emissions from its vehicles by 2035. Among GM’s competitors, Ford aims for carbon neutrality by 2050, including in the vehicles it sells, and VW has made the same commitment. Toyota has committed to CO2-free operations by 2050.

The approach GM has laid out is broad, setting targets for emissions reductions that environmentalists regard as legitimate for its own operations as well as the products it sells. The company has also asked its suppliers to disclose their own emissions.

The automaker has already avoided nearly 1 billion tonnes of CO2 tailpipe emissions through the sale of its EVs and significantly reduced its energy use and energy and water intensity.

But what the company emits in its operations doesn’t account for the cars GM sells. Fully 75% of the greenhouse gas emissions the company is ultimately responsible for—in its own operations, those of its suppliers, and from its products—comes from customers driving its vehicles. Ford likewise reports that these so-called Scope 3 emissions represent 75% of its total.

GM says it will be producing only vehicles with no tailpipe emissions by 2035, just behind Renault-Nissan’s “early 2030s” commitment.

“I’m encouraged by the amount of investment that firms are putting into emissions-free vehicles,” said Curtis Ravenel, founding member of the Financial Standards Board task force on climate-related financial disclosure. “We’re seeing a virtuous cycle where the economics work, so it allows policymakers to be more ambitious in their regulation and legislation, which provides certainty for the industry to invest further.”

GM was among the earliest large companies to disclose emissions to CDP, beginning in 2003. In its most recent report to CDP, in 2020, GM revealed that its operations were responsible for 1,589,700 metric tons of carbon dioxide emissions the previous year. That’s about as much as 289,000 U.S. homes, according to the Environmental Protection Agency.

“GM has a science-based emission reduction target,” Fischweicher said, as do Ford and VW. That means they have analyzed how drastically, and how quickly, they must reduce emissions in order to meet the goals set out by the Paris Agreement of 2015 and avoid the worst effects of global warming.

“Setting those targets and reporting annually on them does actually lead to change,” Fischweicher noted. “Companies who had set science-based targets reduced emissions by 25%.”

Sustainability of the supply chain

Even if the companies meet their targets for emissions reductions in their operations and their products, there remains the challenge of reducing CO2 and other sustainability impacts in their supply chains. And given the numbers of suppliers and the volume of purchases from them, that can be the most difficult.

“There’s no way to claim sustainability unless you have sustainability in your suppliers,” said Amy Smith, director of forests and sustainable natural rubber at the World Wildlife Fund.

Smith’s focus area provides a revealing example. Around 70% of the world’s production of rubber goes to vehicles—not just for tires but also in hoses, gaskets, and covers under the hood.

Almost by accident, Smith’s organization discovered the deforestation that rubber production causes. They were working with a partner in Indonesia, Eyes on the Forest, which investigates tree-loss hotspots throughout the archipelagic nation, to track forest cover change driven by commodities including palm oil.

“We noticed the impacts of rubber, which alerted us to look at other priority forest landscapes,” Smith said. She discovered rubber production to be a leading cause of deforestation in some regions, a finding that has since been backed up by the organization Forest Trends.

There are six steps between the rubber tree, which produces a sticky, white sap to protect itself from insects, and the manufacturer that supplies it to the automaker. The first step—tapping and collecting the raw material—is widely distributed: About 85% of rubber raw material production worldwide comes from “smallholder” farmers working on 10 hectares of land (24.7 acres) or less. That makes it arduous to reach far back into the supply chain to ensure that the tires GM buys from Michelin or Bridgestone aren’t causing deforestation.

“There’s perhaps a common industry belief that it’s not possible,” Smith said, “but we’re showing the reverse.” A pilot project in Indonesia traced rubber to the village level—granularity that enabled WWF to assess deforestation risk.

Ford was a founding member of the Global Platform for Sustainable Natural Rubber, which is defining sustainability guidelines for rubber producers and purchasers. In under three years, it’s already signed up the buyers that represent half of the world’s rubber purchasing.

Michelin soon committed to a zero-deforestation policy, meaning it would buy no rubber coming from land that had been recently cleared for rubber production. GM soon demanded that its other tire suppliers match that commitment.

Outside of rubber, though, it has a way to go in reaching upstream: Barely 2,000 of its 13,500 suppliers completed supply disclosure surveys in 2019.

Still, the rubber commitments show the power that large upstream purchasers command over the raw material, whatever it might be.

“If a bunch of companies are all working together and all demanding sustainable rubber, suddenly the cost becomes better and the whole supply chain becomes stronger,” said Deb Heed, purchasing manager leading human rights and environment at Ford. Since an animal-to-human disease vector caused a catastrophic pandemic last year, the need to halt deforestation became all the more clear.

Downstream manufacturers’ power extends to emissions as well: Ford has identified 50 suppliers with large environmental footprints and shared with them best practices on reducing energy use and other inputs, while asking them to report on their own. “We’ve got impacts of millions of gallons of water saved around the globe,” Heed said. “And that helps save them money.” Every Ford supplier is now required to report on emissions from their operations, those of their suppliers, and their products. So the benefits cascade upstream.

Government has a role, too, said Aimee Boulanger, executive director of the Initiative for Responsible Mining Assurance, which establishes sustainability standards, including for human rights and labor practices, in mining. With commitments to completely transition to fully electric vehicles, automakers will be purchasing a lot more mined products, such as cobalt, nickel, and copper—all of which have been connected to pollution, financing of armed conflict, and child labor.

“A voluntary multi-stakeholder standard is never going to replace the importance of quality laws and regulations that would guide greater environmental and social responsibility where mining happens,” Boulanger said.

The Ultium platform is the foundation of GM’s EV strategy, which includes the battery cells, modules and pack, drive units containing electric motors and integrated power electronics.
Courtesy of GM

In June, Germany enacted a law requiring companies to conduct due diligence into their supply chains, and the European Union has examined the need for one that would apply continent-wide. “Regulatory and legislative requirements are enablers for supply-chain transparency,” Heed said—which is why Ford supports a similar law for the U.S. “Seeing that [European] legislation coming, we wanted to make sure we formalized and had publicly aligned with it.”

The concern over abuses in mining’s supply chains demonstrates that environmental and social impacts won’t be avoided with EVs. “The problem is, can we scale it up at the speed required to build all those EVs alongside wind turbines and solar panels,” which use many of the same materials, said Rene Kleijn, associate professor at the Institute of Environmental Sciences at Leiden University in the Netherlands.

And the faster the transition occurs, the more difficult it will be to reduce those that are particular to batteries.

“We need to not only shift from fossil-fuel-powered vehicles to electric,” said Sybren Bosch, senior consultant at Copper8, an environmental consultancy in Amsterdam. “But how do we organize our mobility in a way that we need fewer vehicles to accommodate our needs?” He envisions a system that optimizes vehicles in between passenger cars and large buses, carrying around eight passengers to “make the system more dynamic and with a less rigid split between public and private transportation.”

Car companies haven’t shown much inclination so far to invest in a future with fewer passenger vehicles and diverse options for mobility such as buses, bikes, and trams.

The National Street Service program Ford announced in 2017 ceased activity a year later. Then, in 2020, Ford increased its sales of gas-guzzling SUVs by 4%, while GM’s truck brand, GMC, jumped 10.4% in the fourth quarter.

GM has set an ambitious agenda for emissions reduction from supply chain to manufacturing to end product. Hitting its targets will require at least as much effort as it has put into marketing its gas-guzzling SUVs in years past, but also more comprehensive rethinking of mobility and sustainable transport from countries and regulators around the world.