Without Darnella Frazier, there would be no guilty verdict 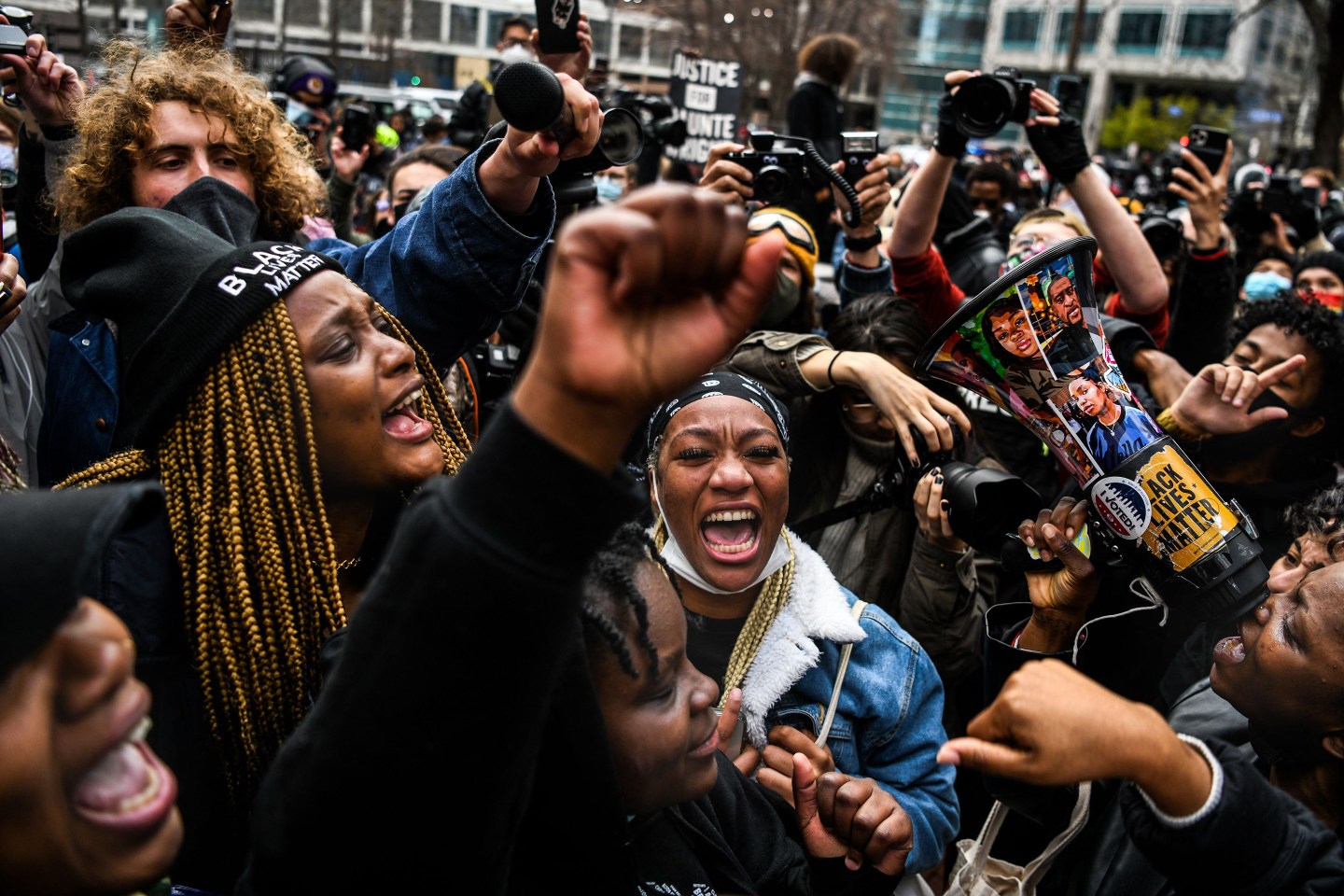 People celebrate as the verdict is announced in the trial of former police officer Derek Chauvin outside the Hennepin County Government Center in Minneapolis.
CHANDAN KHANNA—AFP/Getty Images

Good morning, Broadsheet readers! Canada’s new budget would fund a national childcare program, GM has a plan for the future of work, and there wouldn’t be justice for George Floyd without Darnella Frazier.

– Justice for George. “George Floyd, we did it.”

Those were the words yesterday of Darnella Frazier, the 17-year-old who filmed former police officer Derek Chauvin pressing his knee into Floyd’s neck for nearly 10 minutes almost a year ago (she wrote them on Facebook, per CNN’s Omar Jimenez). Chauvin yesterday was convicted of Floyd’s murder, found guilty of second-degree unintentional murder, third-degree murder and second-degree manslaughter.

Without Frazier, that conviction—the first time a white police officer has been convicted of killing a Black man in the state of Minnesota, according to the ACLU—may never have arrived. Her video started a global movement. Its power is even more obvious when viewed alongside the statement Minnesota police first released about a “man [dying] after medical incident during police interaction.” Before Frazier’s video showed the world what happened, the official version of events was that a “suspect” “physically resisted officers” and “suffer[ed] medical distress.”

As much as Frazier has now changed the world, she bears a burden no teenage girl should have to. When she testified in Chauvin’s trial in March, Frazier recounted how she was traumatized by the experience; she encountered police’s detention of Floyd as she took her 9-year-old cousin to buy snacks. “I’ve stayed up nights apologizing to George Floyd for not doing more and not physically interacting and not saving his life. But it’s not what I should have done,” Frazier said on the stand in March. “It’s what [Chauvin] should have done.” (There’s a GoFundMe to support her.) In her Facebook post yesterday, Frazier said she “cried so hard” as her “heart was beating so fast” in the hour before the verdict was announced.

Lawmakers, activists, and Floyd’s family members thanked Frazier for bearing witness to Chauvin’s murder of Floyd as they addressed the nation yesterday. President Joe Biden, in his remarks, referenced “a brave young woman with a smartphone camera.”

Vice President Kamala Harris focused her speech on the core issue: systemic racism. “Here’s the truth about racial injustice: It is not just a Black America problem. Or a people of color problem,” she said, speaking before Biden took the podium. “It is a problem for every American. It is keeping us from fulfilling the promise of liberty and justice for all.”

The Floyd family is clear: Floyd should be alive, and that would be better justice than a guilty verdict. And yet, after speaking with the Floyd family yesterday, Biden referenced what the family has shared on behalf of Floyd’s 7-year-old daughter, Gianna: Daddy changed the world. “Let that be his legacy,” Biden said.

- Catalyst for action. After Chauvin's conviction, the Congressional Black Caucus renewed its call to pass the George Floyd Justice in Policing Act, a bill that would ban discriminatory profiling, chokeholds, and no-knock warrants, among other measures. “We are hopeful that today will be the catalyst to turn the pain, the agony, the justice delayed into actions that go far beyond today,” said Rep. Joyce Beatty (D–Ohio). The 19th

- Turf war. Gap Inc.'s Athleta brand is raising the stakes in its battle with Lululemon by invading its rival's home turf. Athleta is opening its first two international stores in Canada this fall. Gap Inc. CEO Sonia Syngal has said that expanding Athleta outside the U.S. will help hit the ambitious sales goals she's set for the brand. Fortune

- 'Work appropriately.' GM CEO Mary Barra on Tuesday unveiled how the automaker will manage the future of work. The initiative called "Work Appropriately" will give employees the flexibility "to work where they can have the greatest impact on achieving [GM's] goals." The name recalls how Barra famously reduced GM's lengthy dress code to two words: Dress appropriately. LinkedIn

MOVERS AND SHAKERS: 23andMe CEO Anne Wojcicki will join the board of U.K. online car retailer Cazoo as part of its SPAC transaction. Rich Talent Group, founded by Jana Rich, is being acquired by kyu.

- Research gap. Some women are reporting that their periods changed after receiving the COVID-19 vaccine, but Dr. Randi Hutter Epstein and Yale med-Ph.D. student Alice Lu-Culligan write that there's no data so far linking the vaccines to changes in menstruation. They do argue, however, that the issue highlights how little the medical community knows about menstruation. New York Times

- Remaking Condé Nast. In a rare interview, Condé Nast's top editor Anna Wintour talked about how the magazine publisher is reshaping itself to better collaborate across titles and respond to calls for a more diverse staff. “Like other companies, we’ve had to look inward over the past year and to learn from what’s happened,” she said. She also predicts a post-pandemic surge in demand for luxury goods. "People have been locked up for a long time and they are going to go out and want to spend," she said. Financial Times

- Searching for a successor. Reality star-turned-entrepreneur Bethenny Frankel is debuting a new show this month that will chronicle her search for a vice president of operations for Skinnygirl, the lifestyle brand she launched in 2009. This profile digs into how Frankel has mastered 'sponcon,' turning her reality show stints into marketing opportunities. Marie Claire

Why is it so hard to show Black women's musical genius on screen? New York Times

Opinion: There could never be a female Andrew Yang New York Times

"It was the passion, that was the driving force."