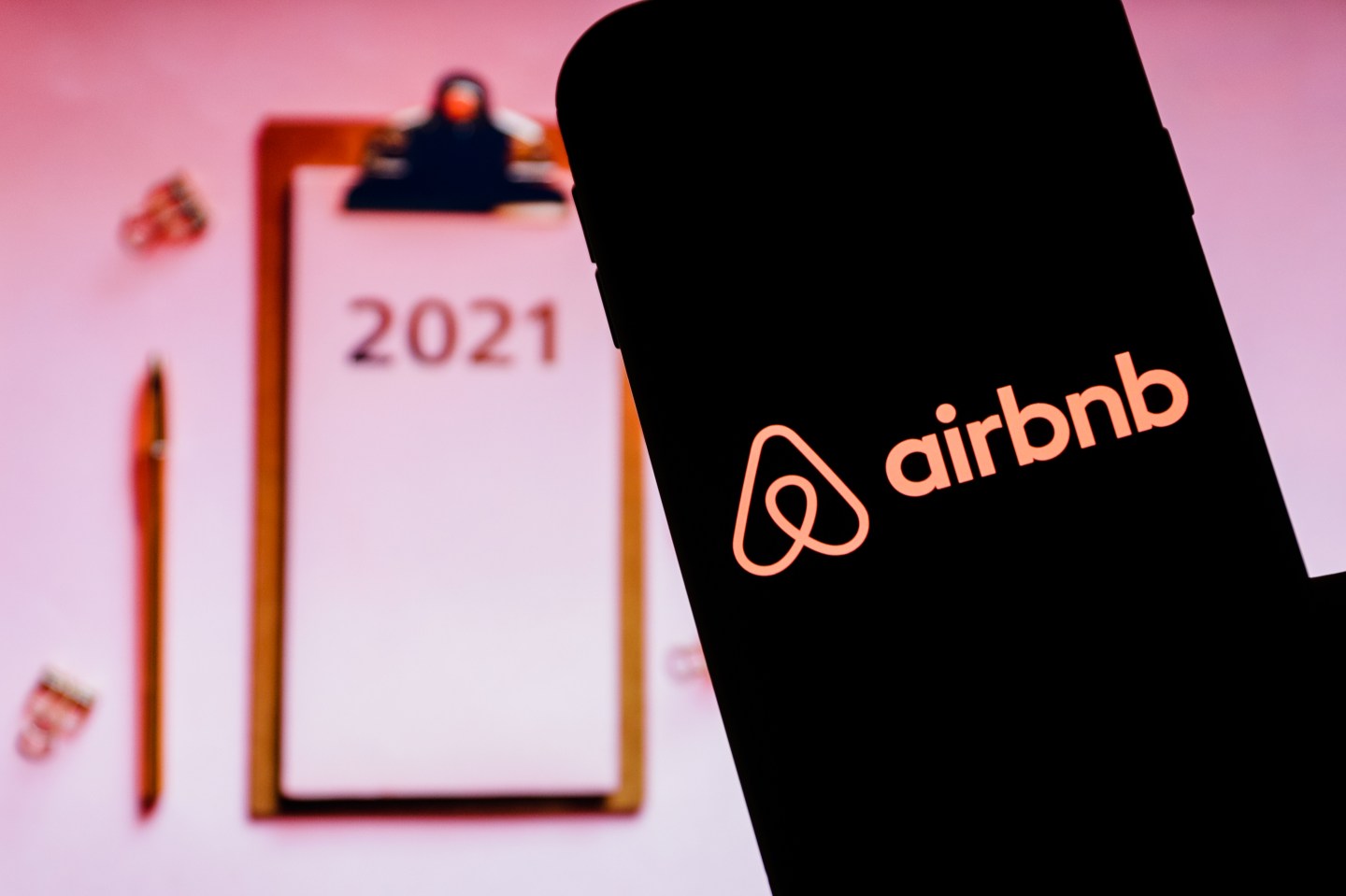 Airbnb posted its first earnings ever as a public company late Thursday. And even though its valuation has soared far beyond its pre-pandemic numbers, its fourth-quarter financials made it clear that the pandemic has remained an issue.

The company reported revenue of $859 million for the three months ending December 2020—down some 22% compared to the year prior. It also lost about $3.9 billion in the quarter, with much of the losses associated with costs from its compensation tied to its IPO as well as loans it took out during the worst of the pandemic. Shares of Airbnb fell 9% after the announcement.

Still, investors already appear to be seeing Airbnb through post-pandemic glasses. Despite the recent selloff, Airbnb is valued at over $100 billion—no small number for a company valued at $18 billion at the beginning of the pandemic. And the company is enjoying the large valuation despite pointing to “limited visibility for growth trends in 2021 given the difficulty in determining the pace of vaccine roll-outs and the related impact on willingness to travel.”

The bullishness doesn’t come without its rationale: Losses before interest, taxes, depreciation, and amortization (a metric that controls one-time costs such as IPO-related compensation) fell to $21 million in the fourth quarter compared to $253 million in the same period the year prior. Airbnb has also fared generally better than another travel company, Expedia, where revenue dipped 67% in the fourth quarter.

And in his interview with CNBC, Airbnb CEO Brian Chesky framed the pandemic as a positive for skinnying the company’s spending.

“What the pandemic showed is that we can take marketing down to zero and still have 95% of the same traffic as the year before,” he said on CNBC’s Mad Money. “We’re not going to forget that lesson.”

Bottom line: Airbnb has managed to turn investors onto a story of resilience and sustained future profitability (the company has historically been able to turn a profit in the third quarter of the year). But uncertainty still sits around the pace of vaccine rollouts and when governments will lift restrictions on cross-border travel—an area that, in 2019, encompassed 49% of Airbnb’s total nights booked.

Late Thursday, Bessemer Venture Partners, an early stage-focused shop known for its bets on companies including Twitch (which sold to Amazon), announced that it raised $3.3 billion across two funds and had added Blackburn as a new partner.

Having spent some 22 years at Amazon, the former SVP of business and corporate development at the e-commerce giant worked on a number of notable projects, including Prime Video, Amazon Studios, and Amazon Music. In the past, his name had been floated as a potential successor to Bezos.

Blackburn’s move comes as Bezos is preparing to step down and make way for Amazon Web Services CEO Andy Jass.

HOUSEKEEPING: My colleague Anne Sraders will be taking over Term Sheet until Wednesday. Please send her any deals.

-Kraken, a San Francisco-based cryptocurrency exchange, is in talks to raise funding at a $10 billion valuation, per Bloomberg. Discussion include Fidelity, Tribe Capital, and General Atlantic. Read more.

-Terminus, an Atlanta-based maker of a marketing platform, raised $90 million in Series C funding. Great Hill Partners led the round and was joined by investors including  Atlanta Ventures, Edison Partners, and Hallett Capital.

-Fi, a New York-based maker of a smart dog collar, raised $30 million in Series B funding. Longview Asset Management led the round and was joined by investors including Advance Venture Partners, Gokul Rajaram, RRE Ventures, Lerer Hippeau, and Freestyle.

-Lexer, a Los Angeles-based customer data platform for brands and retailers, raised $25.5 million in Series B funding. Blackbird Ventures and King River Capital led the round and were joined by January Capital.

-memmo.me, a Swedish platform for celebrities to post messages to fans and businesses, raised $10 million in Series A funding. Left Lane Capital led the round.

-Outcast Foods, a Canada-based company focusing on food waste and reducing the carbon footprint of food supply chains, raised $10 million in a financing round from District Ventures Capital and BDC Capital.

-GiveSignup, a Moorestown, N.J.-based platform for nonprofits, raised $3.2 million in Series A funding. Payroc led the round.

-Stevanato Group, an Italian maker of glass vials for COVID-19 vaccines, is preparing for an IPO that could value it between $4 billion to $5 billion, per Reuters citing sources. Read more

-YieldStreet, a New York-based startup allowing consumers to invest in alternative assets, is weighing creating its own SPAC, per Bloomberg. Read more.

-JMI Equity, a Baltimore and San Diego-based growth equity firm, is seeking to raise $1.7 billion for its newest fund, per the Wall Street Journal. Read more.