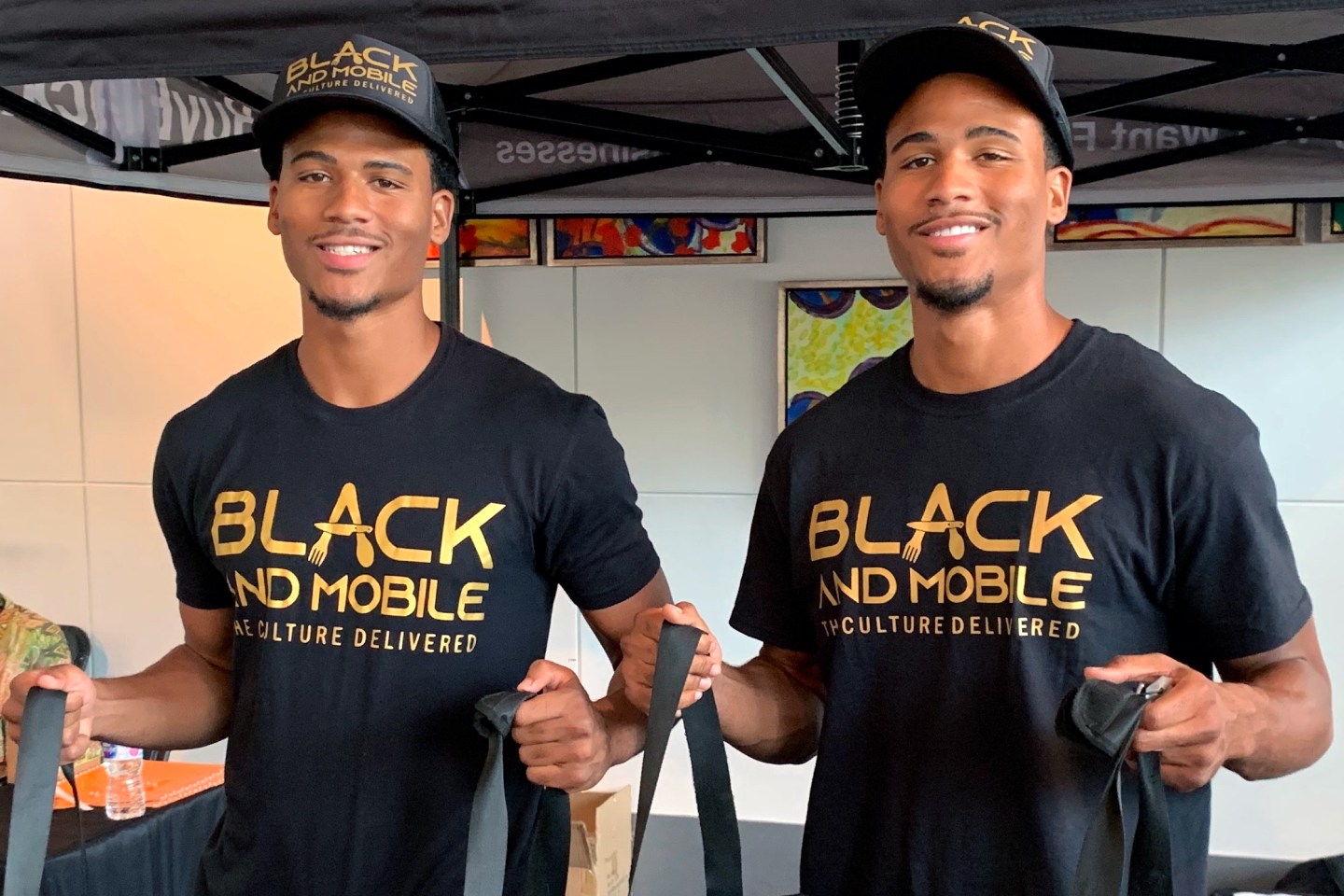 While the radioactive dust of the 2016 election settled, David Cabello, 25, and his twin brother, Aaron, faced a crossroads: continue with their degrees at Shippensburg University or drop out to pursue a personal mandate: “We wanted to help Black people and Black businesses,” David says. “It was our focus, our only thing. We didn’t know how we were going to do it, of course. We were 21 years old and broke. We just knew we wanted to help.”

Aaron had an additional decision: de-enlisting from the National Guard. He didn’t think his drill sergeant would take it well when he filed his paperwork, an essay expressing his concern about a future where martial law and fighting innocent civilians was not only possible but likely (see: St. John’s photo op). But he didn’t think the white man from his hometown would tell him, “This Black Lives Matter shit is fucking stupid. You’re worthless, and you’re never going to be anything, just like the rest of them.”

Aaron left the military, and the brothers dropped out of school and moved back home to Philly. They started working at Black and Nobel, a bookstore where the twins sought a path to enlightenment and empowerment from the older Black men who ran the place. “But we were still broke,” David says. So when a coworker told David about his lucrative side gig delivering by bike for Postmates, he jumped at a job that played to his athleticism and hardscrabble work ethic. On a bike, he figured, nobody would outdeliver him.

Aaron went along with it because twins, and soon the Cabellos were delivering for Postmates andUberEats. But David had his sights on Caviar, which serviced the highest-caliber restaurants. Delivering bronze-extruded pastas and bijou bottled cocktails paid more than Styrofoam coffins of tacos and wings, and the delivery crowd knew it. “It was taking six, seven months, even longer, for people to get hired by Caviar,” David says. “So instead of waiting, I just went right to the corporate office and showed them I was eager and ready to work, and they just gave me the job.” Aaron didn’t get hired, so the twins Parent Trap–ed the delivery service. “We just used the same account. I would do a five-hour shift, take a break, charge my electric bike, and then Aaron would go out there for five hours. We were doing 10, 11-hour days. I’m sure they probably thought, ‘How is he delivering for that long?’”

During one marathon session, they pulled in $1,100 in 30 hours. David recalls, “I was like, if I can make this much money delivering food on a bicycle, how much can I make if I owned a company?” He searched “How do I start a delivery service” on YouTube, built an app on Shopify, and plastered over the Caviar logo on his delivery bag with a new one: Black and Mobile, touted by its cofounders to be the only Black-owned delivery service exclusively servicing Black-owned restaurants.

COVID’s acceleration of delivery dependence, plus a surge in support for Black-owned businesses in the wake of George Floyd’s death, put Black and Mobile on a fast track to expansion in 2020, one in which tech was essential.
Courtesy of Black and Mobile

Black and Mobile, which David and Aaron officially started in 2019, solves for the service gaps in Black communities on both the consumer and supplier ends. Delivery platforms may deprioritize or outright redline majority-minority neighborhoods, as was the case in D.C., and the high fees and tech barriers can make a third-party partnership untenable for Black-owned restaurants, if they’re courted at all.

“You would think big national businesses would have good customer service and not have such high sign-up costs and commission fees,” says Shon Emanuel, third-generation owner of Supreme Oasis, a Black and Mobile partner famous for its vegan oxtail and strawberry cake in West Philly. “Black and Mobile has less and takes less”; 20% to be exact, or 15% for partner restaurants that deliver exclusively through the service. The industry standard can be as high as 30% in cities without commission caps.

Both the upwelling of support for Black businesses during a summer of racial reckoning and a pandemic that has grossly enriched national delivery platforms have been good for Black and Mobile’s business. “It’s definitely unfortunate that our business picked up since a Black man got murdered,” David says. “We started getting a lot of attention and sales during that time,” and Black and Mobile expanded from Philly into Detroit, Atlanta, and Baltimore. The old Shopify app David designed couldn’t keep up.

“Tech is the only thing that matters, honestly,” David says. “If the tech is right for drivers to operate the system, for the customer to order; if it’s right and looks good and works properly every time, that’s what matters.” He hired a young local development company to design a new app, but according to David, the company wound up blowing the deadline for Black and Mobile’s Atlanta launch in July: “Ten hours before the launch, literally at midnight, they let me know they needed more time.” More so than the botched launch, David says the new app didn’t work. “Drivers only work if there are orders. People couldn’t place them, and restaurants weren’t getting them. Our reputation was severely impacted. Our ratings on Google went from a 4.7 to a three.”

David puts the loss at around $300,000: “We were close to going out of business. My mom had to loan me a couple thousand dollars.”

Enter Pepsi. (Yes, Pepsi.) In June, PepsiCo Global Foodservice made a $400 million commitment to fight the combined impact of COVID-19 and racial inequality. One of the programs under that umbrella is Dig In: “What we call a purposeful rallying cry to double down on our support for Black-owned businesses, with a particular focus on restaurants,” says Scott Finlow, global chief marketing officer of PepsiCo Foodservice. “It’s a program that’s holistic, sustained—versus transactional—and focused on ensuring owners are equipped with technology and tools to make it through the pandemic and thrive.” It’s a program with a $50 million budget and partnership over five years, not the corporate version of posting a black square on Instagram then going back to brunch.

When it comes to tech, says Finlow, “there’s a capabilities gap [between white- and Black-owned businesses], which comes from access to and cost of capital. The structural disadvantage that goes back generations has led to Black restaurants being undercapitalized and not necessarily having some of the tools that let them invest in the tech that’s increasingly required to work in an off-premises world—which is a make-or-break capability today.”

As one of PepsiCo’s Dig In partners, Black and Mobile is funding the rehabilitation of its app with the help of a Black-owned tech team, 180Atlas, out of Florida. “It was the support we needed to keep going,” David says. “Fixing the tech side of it is our main focus. I think that’s all we’re missing at this point.”

Even in the midst of a huge setback last year, Black and Mobile’s 2020 revenues were $500,000, a 2,000% increase from the previous year. David paid his mom back and has Houston and Los Angeles in his sights. “Our goal for this year,” he says. “A million.”