TikTok to the moon? The app is outgrowing its Gen Z stereotype 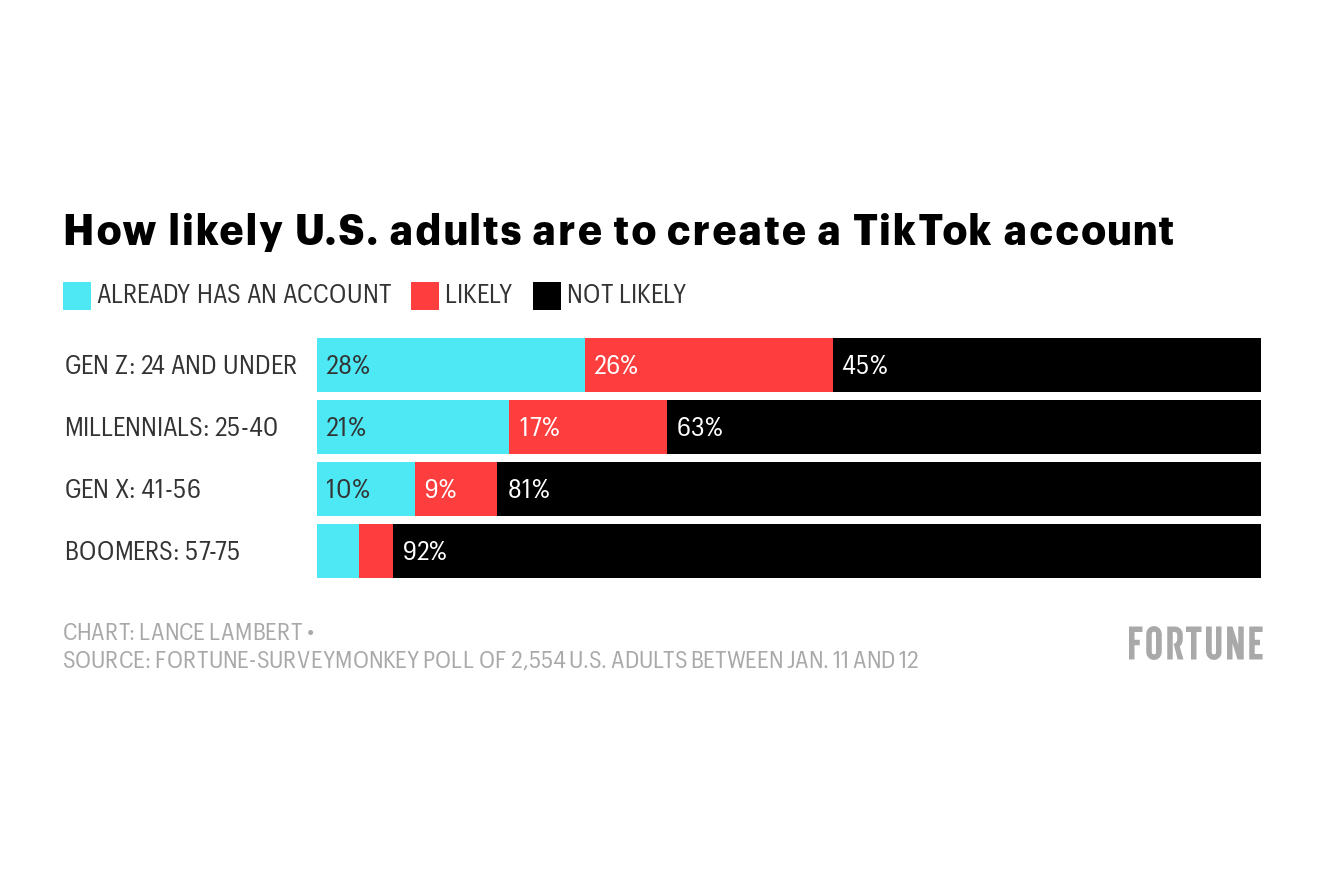 We ignore it, we mock it, then at some point we give in. That’s how many new social media platforms ensnare us.

But will TikTok, the fast-growing app known for its short videos, continue to take over social media? If so, your business might want to consider a presence: Brands that joined Instagram and Facebook early built massive followings before advertising on the platforms got super expensive.

To find out where TikTok is headed, Fortune and SurveyMonkey polled 2,554 U.S. adults between January 11 and 12.* We measured TikTok’s short-term growth by comparing the results to our August 17-18 poll. (Our margin of error in both polls is 3 percentage points.)

We found that TikTok is still rapidly growing—and could add tens of millions of users in 2021. Among U.S. adults, 16% say they use TikTok—up from 11% in our August 2020 poll. Another 10% of U.S. adults say they’re likely to join the platform. If that happens, it’d be the third largest social media platform, behind only Facebook (which 70% of respondents say they use) and Instagram (36%). More on that below.

Here’s a Fortune Analytics prediction: TikTok will soon surpass Twitter and Snapchat in the U.S.

TikTok could be closer to surpassing its peers than our data suggest: Fortune Analytics doesn’t poll Americans under 18 years old—but they make up a large chunk of TikTok’s users.

An increase in older users is a telltale sign of a maturing social media platform. But that isn’t happening anytime soon for TikTok. On TikTok, Gen Z rules the roost: Among Gen Zers, 28% use the app, compared to 21% of millennials, 10% of Gen Xers, and 5% of baby boomers.

The people about to join the app also skew young: Another 26% of Gen Zers say they’re likely to create an account, compared to 17% of millennials, 9% of Gen Xers, and 4% of baby boomers.

TikTok is the greatest threat to Snapchat—which is also popular with the under-30 crowd. Among Snapchat’s users, 49% either use TikTok (28%) or are likely to join (21%).

The least threatened competitor is social-media juggernaut Facebook. Only 24% of its users either have TikTok (13%) or are likely to join (11%). Simply put, Facebook isn’t losing its top-dog status anytime soon.

Former President Donald Trump issued an executive order last August to ban TikTok, which he accused of being a security threat, from operating in the U.S. unless its parent Chinese company, ByteDance, sold it. Ultimately, TikTok reached a deal to sell to Oracle and Walmart—though it’s on hold as the Biden administration reviews it.

But the episode has damaged TikTok’s image, especially among right-leaning Americans. Among Republicans, 75% view TikTok unfavorably, compared to 48% of Democrats. On the one hand, this image problem could impair TikTok’s long-term growth. On the other hand, TikTok is also largely disliked by older Americans (66% of baby boomers view it unfavorably), which could ironically keep it cool with young Americans (55% of Gen Zers view the app favorably).

*Methodology: The Fortune-SurveyMonkey poll was conducted among a national sample of 2,554 U.S. adults between January 11 and 12. This survey’s modeled error estimate is plus or minus 3 percentage points. The findings have been weighted for age, race, sex, education, and geography.