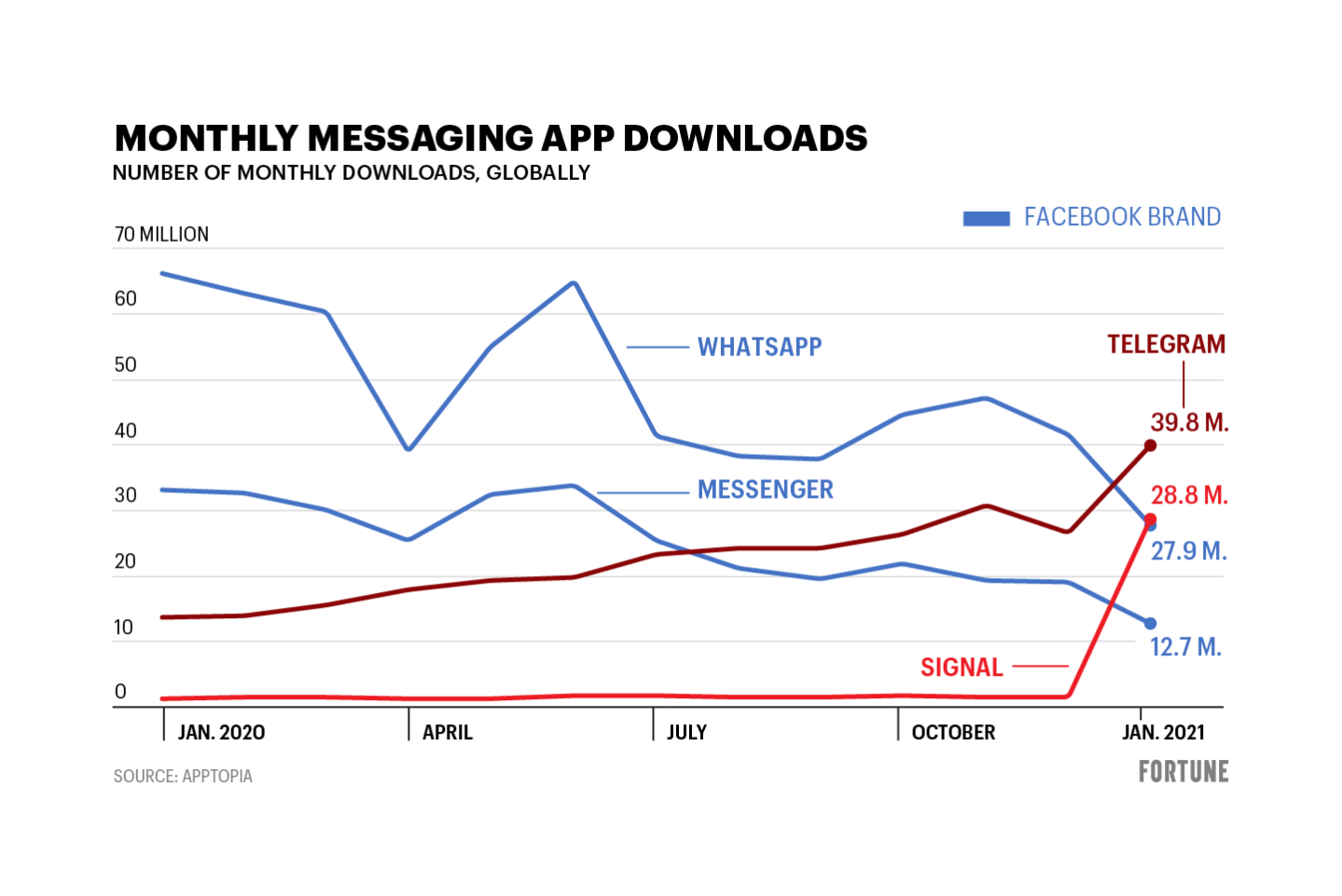 Facebook has dominated app-based messaging for the last five years with its homegrown Messenger services and WhatsApp, which it bought in 2014. During this time would-be rivals like Signal and Telegram have largely failed to break out beyond a niche group of privacy-based users—but, in the last six months, all that has changed.

Indeed, the number of monthly downloads of Telegram and Signal has skyrocketed since October and, in January, surpassed the popular Facebook apps. The growth in downloads for Signal has been especially pronounced, shooting from around 1.2 million a year ago to nearly 30 million by late January.

While the last month has seen the upstarts eclipse Facebook’s apps in terms of downloads, the number of people using Messenger and WhatsApp on a daily basis is still far higher. According to Apptopia, which supplied data for this story, Messenger and WhatsApp are used by 1.3 billion and 570 million, respectively, compared to 46 million daily users for Telegram and 13 million for Signal.

To get a sense of Telegram’s and Signal’s newfound popularity, the chart below shows how each eclipsed 2 million downloads a day during one period in January, though that has leveled off:

The precise reasons for Telegram and Signal’s sudden spike in popularity is unclear, though some have speculated the phenomenon is a response to Facebook’s recent decision to merge data from WhatsApp into the rest of the company’s advertising operations. In the case of Signal, the app also received a boost from a January endorsement on Twitter from Tesla CEO Elon Musk, which was retweeted by Twitter’s own CEO Jack Dorsey.

Both apps are known for their privacy features. These include the ability for users to have messages self-destruct upon receipt, and end-to-end encryption, which means law enforcement can’t obtain their contents.

Signal was launched in 2014 by Moxie Marlinspike, an iconoclastic American coder and former Twitter employee who is legendary in privacy circles. Telegram, launched a year before, was developed by programmer Pavel Durov, who is also behind Russia’s biggest social network.

Signal also received a flurry of attention in 2017 at the start of the Trump administration amid reports many Capitol Hill staffers had begun using it to shield their communications. Its current spike has been much more significant. Telegram, which is especially popular for group chats and among cryptocurrency enthusiasts, likewise saw a surge in 2017, and has remained the more widely known of the two.

One reason for the apps’ recent popularity, in addition to concerns over Facebook’s privacy practices, may simply be network effects—as more users have signed on, they have spread words to their friends, leading to media attention and a further surge of users. As for how much the new apps pose a threat to Facebook, Apptopia spokesperson Madeline Lenahan told Fortune that the rise of Signal and Telegram hasn’t coincided with a significant decline in WhatsApp and Messenger.

“WhatsApp and Messenger are so large that they are still going to maintain those users that are not concerned with privacy, and continue to attract those that don’t feel strongly on the matter. They are convenient apps to keep in touch with Grandma, for instance, and that won’t change,” Lenahan said by email.