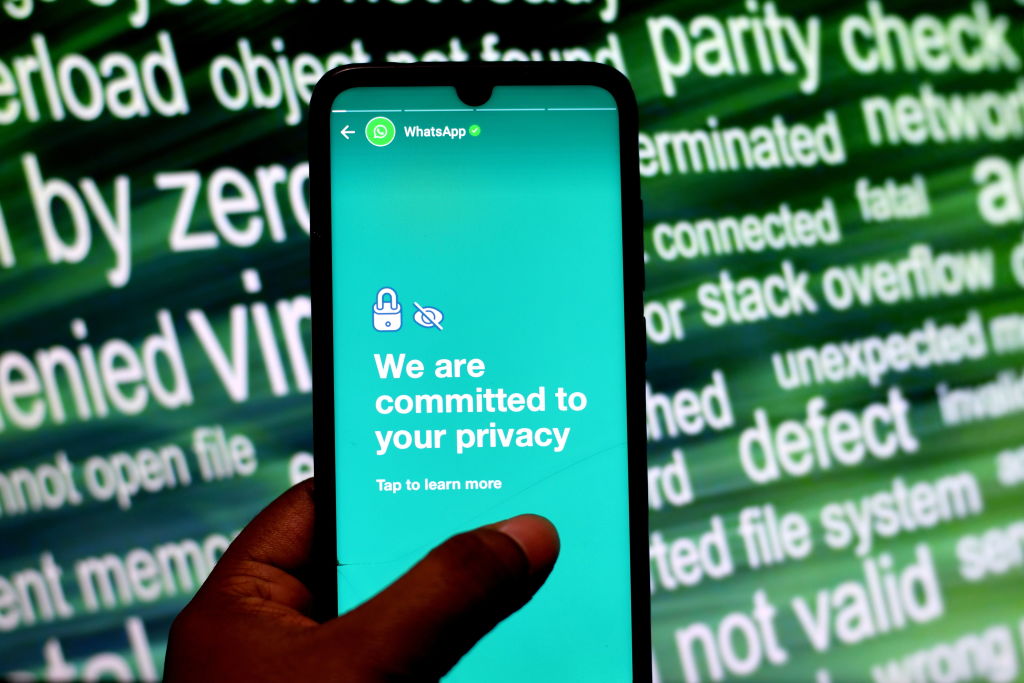 Proposed privacy changes at WhatsApp are helping to drive adoption of business-focused messaging services.
Photo by by Avishek Das/SOPA Images/LightRocket via Getty Images

Concerns about Facebook’s access to user data on its WhatsApp messaging service in recent weeks has driven record numbers of users to alternative platforms. And it turns out that businesses are no exception.

The spike in user defections alarmed Facebook enough that it has pushed back the date the privacy changes were to take effect to May 15, from Feb. 8. In India, where WhatsApp is particularly popular, the company took out full page newspaper advertisements to try to assure users that the company “respects and protects” users’ privacy, the ad copy read.

Facebook bought WhatsApp in 2014 for $21.8 billion. Two years later, it altered the messaging service’s terms and conditions to give Facebook access to WhatsApp users’ metadata—information such as who the users messaged, and when and where they used the service. But WhatsApp users were given the choice to opt out of this data sharing. The recently announced changes seemed to remove that opt-out, although Facebook said this would only affect businesses, not individuals, and was designed to make it easier for companies that use WhatsApp to interact with customers.

That clarification, and the delay in implementing the changes, may do little to stem the tide of user defections. “The new policy, and the uproar around it, has woken many WhatsApp users up,” Anurag Lal, the chief executive officer of NetSfere, a messaging platform aimed at corporate communication.

Lal says among those concerned about Facebook’s proposed rule changes are business teams that were often using WhatsApp for internal team communication on-the-go, or to interact with customers and suppliers. “They are putting their entire intellectual property at risk, and not getting any guarantee of privacy or security,” he says.

For enterprise-oriented messaging apps such as Chicago-based NetSfere, the fears over how Facebook will attempt to monetize WhatsApp user data are just the cherry-on-top-of-an-ice-cream-sundae year thanks to the COVID-19 pandemic, which forced companies around the world to find ways to coordinate teams working completely remotely and interact with customers without any in-person meetings.

NetSfere, for instance, had already seen its user base soar some 800% since the start of the pandemic, Lal says. And it has had a new spike of interest from potential customers since news broke of Facebook’s changes to WhatsApp’s terms and conditions.

It’s the same story at Symphony, the messaging platform backed by a consortium of big financial institutions, including Goldman Sachs, J.P. Morgan Chase & Co., Morgan Stanley and Bank of America, according to David Gurle, the company’s CEO. Symphony’s subscriber base has grown more than 40% in the past year, with a further acceleration in recent weeks, he says.

Morten Brogger, the CEO of Berlin-based Wire, a highly-secure mobile messaging platform that has pivoted from being a consumer-oriented app to one aimed at corporations, says he’s had inquiries from “three to four European governments” that he attributes to the controversy over WhatsApp’s privacy changes.

NetSfere’s Lal says that WhatsApp became popular with business teams because it was user-friendly—sending photos is a snap, employees were already familiar with it from personal use, and because it offered seemingly high-levels of privacy and security, which included end-to-end encryption of the message contents. But corporate IT managers and legal and compliance departments often viewed WhatsApp as an inappropriate tool for business communication.

For example, firms had no control over the data their employees transmitted across WhatsApp, and they could not insure workers were not deliberately or inadvertently violating laws on everything for data privacy to insider trading.

Brogger says in Europe, many companies feared violating the European Union’s strict data privacy regulations if customer data wound up on WhatsApp, where it is stored on Facebook’s servers, and this lead to these firms banning their employees from using the platform for work.

“Administrators had already put in place strict polices with consequences all the way up to termination for employees who were using WhatsApp for business communication,” Gurle says. “Now they are saying ‘we told you so before, but now you really need to make the move’ [to a better system.]”

But many financial traders, for instance, were so accustomed to using WhatsApp that some of the 460 organizations that use Symphony found it was difficult to get them to stop using the platform, particularly when communicating with clients at other firms that might not have another messaging platform in common. So Symphony also took something of an “if you can’t beat ’em, join ’em” approach by offering an integration with WhatsApp, negotiated with Facebook, that allowed corporate compliance departments access to the message traffic.

Now, in the past few weeks, Gurle says he’s had requests from customers for similar integrations with Signal and Telegram, two messaging platforms that have been among the primary beneficiaries of users abandoning WhatsApp. But, he says, such integrations take a long time to negotiate and it isn’t clear at this point if either Signal or Telegram is interested in a deal with Symphony.

Lal says that while many businesses were initially resistant to allowing teams to coordinate or deal with customers through mobile messaging, that attitude was starting to shift in the past two years and that the remote working forced by the COVID-19 pandemic has convinced most large companies that they need collaboration tools that work remotely. He says a study conducted by NetSfere showed that using mobile messaging for work could boost productivity by between 5% and 20% per employee.

The messaging platforms aimed at businesses all differ from the consumer-oriented messaging services in several important respects: with the consumer apps, the data resides in datacenters controlled by those services and belongs to them, even if end-to-end encryption means the companies’ themselves can’t read the message contents.

With the services designed for enterprises, the business customer owns the data and can choose to where to store it, choosing either a public cloud run by the messaging company or its own private cloud infrastructure, or even, in some cases, run on servers in its own facilities. The business-oriented apps also give the organizations using them much more control over who is in group chats—for instance, ensuring that when an employee leaves the company, she is removed from team message groups and loses access to all previous message traffic.

“In the past, I have been included in a WhatsApp conversation with a large mobile operator, and they began having a business continuity discussion on this group chat without them meaning for me to be in it. That is hugely dangerous,” Lal says.

Most of the business-oriented messaging services offer the same sort of strong encryption methods as WhatsApp, Signal and Telegram. With the commercial services, the encryption keys are shared with the business customer, so it can, if necessary, read the content of the messages.

Wire uses an innovative encryption system that generates an individual encryption key for each message sent via the service. The company was founded just weeks before Facebook bought WhatsApp in 2014 by two Skype alumni and was initially backed by Skype co-founder Janus Friis. But it struggled to gain traction as a consumer app. The service has found a second life since pivoting to business customers in 2017. Among those using it, according to a report in German magazine Der Spiegel, is the German defense ministry. It has also been adopted by select teams that require high-degrees of confidentiality at Ernst & Young and asset management firm Blackrock.

In the past year, thanks to the need for more businesses to work remotely in a secure way, its revenues have leapt ahead between three- and four-fold, Brogger says. The service now has 1,800 business customers.