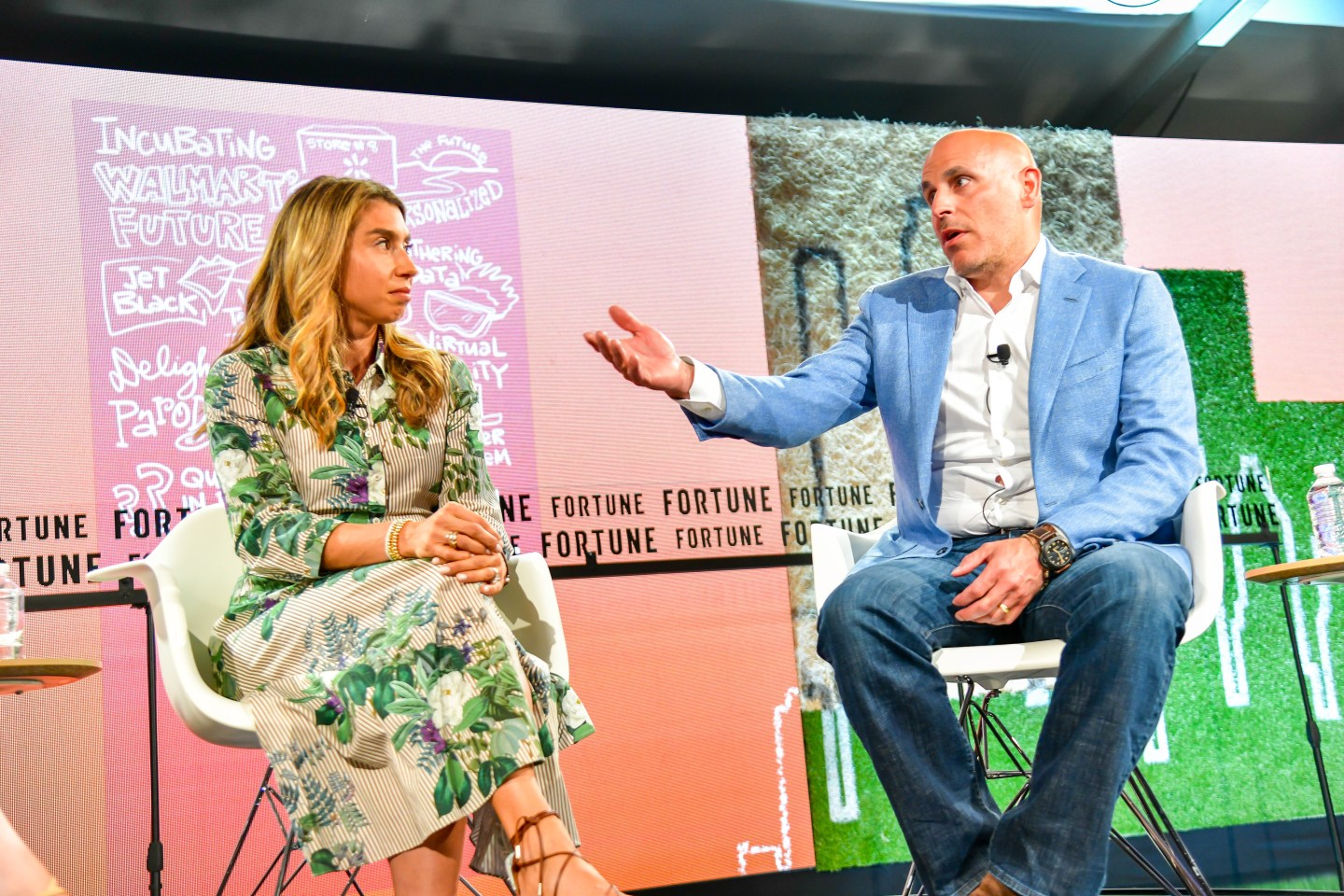 Walmart Inc.’s Marc Lore, the architect of its digital operations, is leaving the retailer at a time when its battle with Amazon.com Inc. is growing even more intense.

Lore, 49, plans to retire from the role effective Jan. 31. He will stay on as a strategic adviser through September, the company said in a filing. His contract required him to stay at Walmart for five years, and he’s fulfilling that with his short-term consulting role.

Walmart shares fell as much as 2.2% on Friday in New York, the most intraday since September.

“We view Mr. Lore’s departure as an incremental negative in that it removes a visionary and entrepreneurial executive from the company,” Quo Vadis analyst John Zolidis wrote in a research note. His planned exit could also “suggest that further transformational moves within the digital and e-commerce channels are becoming more difficult to achieve.”

The retailer didn’t name a new executive to inherit the U.S. e-commerce business that generates more than $25 billion in sales and has been responsible for a good chunk of Walmart’s growth in recent years, especially during the pandemic, as more shoppers migrate online. Instead, all the aspects of U.S. retail e-commerce business report to John Furner, CEO of Walmart U.S., beginning on Feb. 1.

Walmart brought Lore into the fold when it spent $3.3 billion in 2016 for his startup, Jet.com, an e-commerce site that was unprofitable yet popular with younger urban shoppers that Walmart has long coveted.

Walmart Chief Executive Officer Doug McMillon quickly put Lore and his lieutenants in charge of the retailer’s U.S. web business, which until then had lacked a coherent strategy and was no match for Amazon. Lore revamped the site, acquired a slew of additional brands and improved delivery capabilities, making Walmart.com a formidable rival to the Seattle-based internet giant.

Not all of Lore’s moves paid off, though, and tensions emerged between Walmart’s digital units housed mainly on the coasts and the leaders of its U.S. store operations based in Bentonville, Arkansas. A lack of communication and cooperation between the two camps hindered progress, and in response Walmart sought to merge the two units to speed decision-making.

The streamlining process led to the demise of Jetblack, a concierge shopping service Lore created to move Walmart upmarket. Some of his acquisitions, like ModCloth and Bare Essentials, have also been jettisoned. Jet.com, meanwhile, was slowly absorbed into Walmart’s main website, and finally shuttered in 2020.

“We knew we needed time to build and scale the e-commerce business before combining our teams, and because of the progress we’ve all made, and the mindset we’ve all developed these past few years, we were able to successfully merge our teams last year,” McMillon wrote in an internal company memo Friday obtained by Bloomberg News. “With our structural changes behind us, we have concluded it’s time for Marc to transition out of his everyday role at Walmart.”

Lore, who normally participates in Walmart’s quarterly earnings calls with analysts, was noticeably absent on the company’s second-quarter teleconference in August and third-quarter call in November.

“It’s not wholly unexpected that Lore would leave Walmart,” Jennifer Bartashus, an analyst at Bloomberg Intelligence, said in an interview. “The company has built a pretty deep bench with regards to talent, especially in the e-commerce side of the business.”

In December 2019, Lore embarked on a plan to sell some of the Walmart shares he received as part of the acquisition. So far he’s disposed of roughly 1 million of them and collected $130 million in proceeds, according to data compiled by Bloomberg.

The proceeds from the sales could help fund what’s reported to be Lore’s next venture, a startup dubbed Food Truck Inc. that will prepare and deliver high-end meals to affluent suburbanites. There, Lore will work alongside some of his longtime acolytes as well as his younger brother Chad, a former managing director at Deutsche Bank, according to a report. Food Truck didn’t immediately reply to a request for comment.

Walmart missed out on its first chance to hire Lore. Amazon outmanuevered the retailer a decade ago to acquire his first startup, Quidsi, which operated Diapers.com and Soap.com. In 2016, McMillon bought Jet.com to make sure Walmart didn’t miss out again.

Lore spent his early years in an Italian neighborhood on Staten Island, before his family moved to Lincroft, N.J., while he was in middle school. He displayed entrepreneurial chops at an early age, charging family members five cents each to watch cartoons on a slide projector while just six years old. By 14 he was trading stocks using his parents’ money. After graduating from Bucknell University, he spent a few years working in risk management on Wall Street, but left finance for the startup world.

His first company, The Pit, let sports fans value and trade sports collectibles like shares of stock. He sold the business to the Topps trading card company in 2001 for $5.7 million, less than 12 months after starting it.