When Broadway comes back: 5 ways the pandemic will transform the live theater industry 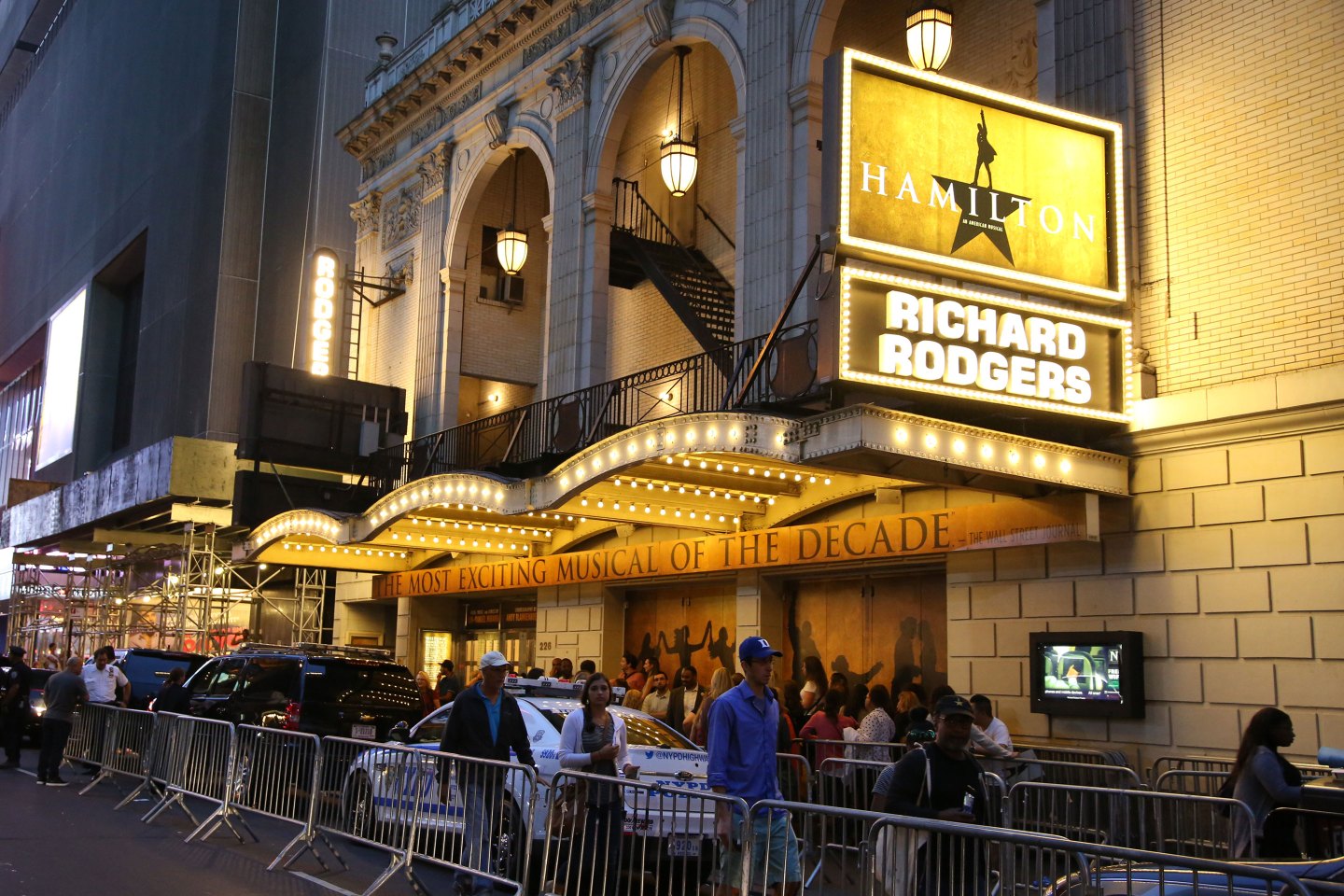 Crowds outside the theater for the final performance of Lin-Manuel Miranda in 'Hamilton' on July 9, 2016 in New York City. Post-pandemic, long-running musicals will likely play a smaller role on Broadway, writes Michael Barra.
Walter McBride—WireImage/Getty Images

The COVID-19 pandemic has brought the global theater industry to a standstill. But 2020 is not the first time that the industry has faced an existential crisis. The theater community has confronted acts of terror such as 9/11 or the London Blitz that shuttered cultural activity; disruptive technologies that shifted consumer behavior, like motion pictures and television; and even prior pandemics dating back to Shakespeare, including AIDS, which ravaged a generation of artists.

In each instance the industry has mourned, innovated, and emerged stronger. Make no mistake: Global theater is hurting right now, with its darkest days still to come. Yet the challenges experienced over this year, and the pivots and adjustments they’ve triggered, allow us to infer what may lie around the corner.

Broadway cast members at a rally to support New York City’s entertainment industry in the wake of the World Trade Center terrorist attacks, on September 28, 2001.
David Lefranc—Gamma-Rapho via Getty Images

Broadway programming will shift its focus

According to the Broadway League, the trade organization that represents theater owners and producers, Broadway audiences during the most recent complete season were made up of 35% local residents and 65% tourists. By the league’s estimates, Broadway will not fully regain its tourist audience until sometime in 2025. Thus, Broadway will need to develop and produce content tailored more towards the 35% of audiences that hail from New York City and its suburbs and rely less on the international tourists (19%) and domestic tourists (46%) that made up the majority of its pre-pandemic audience.

This likely means the shuttering of some tourist-friendly long-running musical productions, which may have exhausted their tristate audiences, in favor of recently opened musicals, star-vehicle plays, and special limited-run and concert events. Producers will also attempt to reduce their cost structure, which currently requires near-capacity ticket sales in order to turn profit. Expect to see tightened budgets leading to smaller companies and production scale. London’s West End, the other traditional global mecca for theater tourism, will most likely see similar changes.

Viable alternatives to New York and London will emerge

Where will theater fans go to get their fix until they are able to safely travel back to New York and London? They will seek out—and find—high-quality professional productions closer to home.

Expect the existing circuits of nonprofit regional theaters in the U.S., and subsidized theaters in the U.K., to lead the recovery. As ticket sales represent only a portion of their annual budgets, these theaters can better weather lower capacities and still thrive. Once audiences experience the high-quality professional theater that they produce, those patrons are more likely to become permanent. In terms of recovery, the regionals will be followed by the commercial touring circuits in the U.S. and U.K. that bring productions from city to city and are presented by local venues, often with large subscriber bases.

Theater tourists from outside the U.S. and U.K. will similarly be looking closer to home. Germany, Spain, Australia, Japan, and even emerging theater powerhouses like China will become the global versions of regional theaters, and audiences who’d previously travel to London or New York will travel shorter distances to find what is likely to be increasing quality and quantity of top theater.

The ‘creative class’ will migrate

During the pandemic, many actors, directors, writers, and others have vacated urban cultural centers for locales offering more space and affordability. While away, they’ve learned how to better work and collaborate remotely; from submitting video auditions to doing developmental or preproduction work via Zoom.

In the new reality, many creatives will find they can continue working in this fashion without negatively impacting their careers. Producers and casting directors can no longer expect creatives to live in the most expensive cities when they can easily come in when being paid to do so. Further, if the geographic shift of theater work mentioned in my previous prediction proves true, artists will tend to migrate to where the work is and gravitate towards cities with thriving theater scenes and lower costs of living (I’m looking at you, Minneapolis, Atlanta, and Cleveland).

Theater content will increasingly appear on screens—big and small

With the recent successes of Hamilton on Disney+, American Utopia on HBO Max, and What the Constitution Means to Me on Amazon Prime, a business model for streaming currently or recently running theater productions has now become established.

With streaming platforms ever in need of programming, and producers increasingly in need of reducing risk and maximizing revenue, you have an alignment of interests that cannot be denied. To be sure, contractual standards with authors will need to be revisited to allow for screening of live theater productions that are still running onstage, but the existence of a clear mutual benefit should help the idea prevail.

At the same time, cinemas have been experiencing their own disruption. While the exclusive “theatrical” window for cinema exhibition has been tightening for years, the recent Warner Bros. announcement that Wonder Woman 1984 will debut Christmas Day in both cinemas and simultaneously on its sibling platform HBO Max may prove to be the end of the practice altogether. Cinema will remain the preferred consumer choice for “event viewing”—those viewing experiences that are enhanced by being shared communally. But with the output from studios earmarked for cinemas likely to decline, opportunities for others may arise for theater content, both filmed and live-streamed.

Imagine a mix of programming where at any given time a cinema multiplex may be showing the latest Marvel superhero film, the NCAA basketball tournament, a new season of a Netflix series, and the live stream of a Broadway or West End production. These local viewing opportunities could even grow the overall audience for global theater. It would make its product accessible to those who perhaps were previously excluded from the theater, whether by economics (the average ticket price for Broadway is $145, according to the Broadway League), by geography (the highest-profile productions are centered primarily in New York or London), or linguistically (those productions are staged almost exclusively in English).

As recently as 2012 the clouding of the jurisdictional boundaries between what was considered film versus television resulted in the merger of the Screen Actors Guild (SAG) and the American Federation of Television & Radio Artists (AFTRA). The pandemic has precipitated a similar blurring of the jurisdictional boundaries between the Actors’ Equity Association (AEA) and SAG/AFTRA when it comes to filmed and live-streamed theater.

The two unions were embroiled in a jurisdictional dispute all summer, with both unions issuing contracts to live-stream and/or film theater. A temporary compromise emerged, but the reality is that when filming and live-streaming theater becomes the norm, every production will need to engage their performers under contracts from two unions. With many AEA members also belonging to SAG/AFTRA and vice versa, a merger of those two unions seems very plausible, even if it isn’t imminent.

While no one can predict the future, what is indisputable is that the best way to ensure that theater will have a bright future is for governments worldwide to acknowledge that the sector has been among the hardest hit by the pandemic and will be among the last to fully recover. In the U.S., this should mean passing another round of small-business relief; ensuring the Save Our Stages Act—which aims to protect independent performing arts venues—is included in the next stimulus package; and most importantly, providing health and economic injury benefits to freelance artists.

If artists get the support they need, the world need only sit back and watch the global theater do what it’s done for centuries; mourn, innovate, and emerge stronger than ever.