Why Tiffany Haddish turned down the Grammys 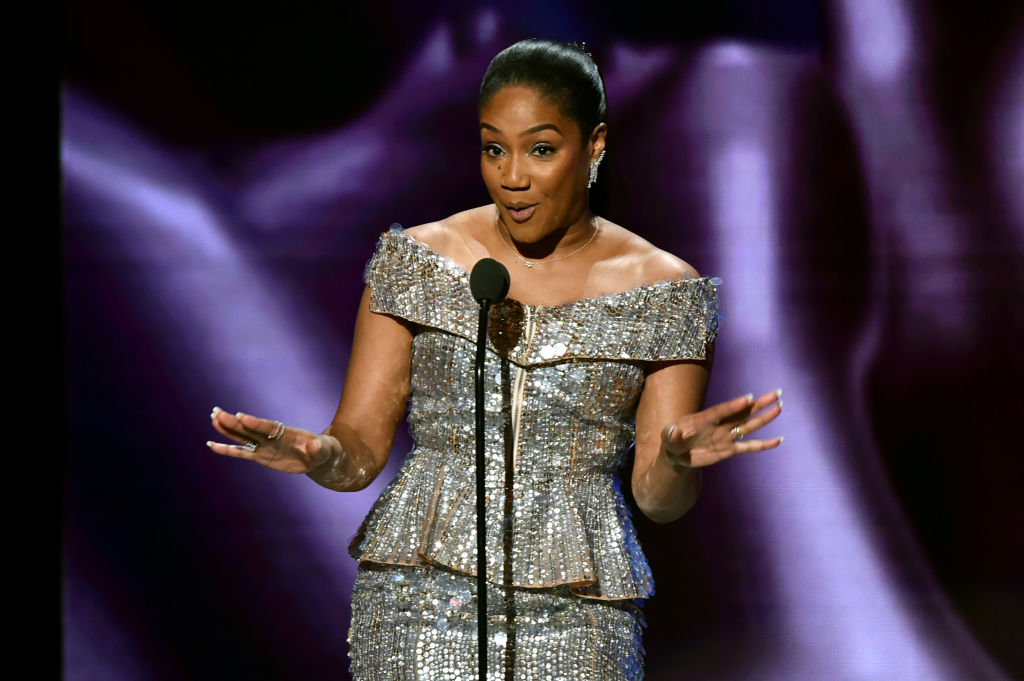 Tiffany Haddish speaks onstage during the 51st NAACP Image Awards at the Pasadena Civic Auditorium on February 22, 2020. Haddish says she recently turned down an opportunity with the Grammys because the compensation was so poor.
Aaron J. Thornton/Getty Images for BET

Good morning, Broadsheet readers! Global climate talks leave out women in top roles, fixing childcare could add $1.6 trillion to U.S. GDP, and Tiffany Haddish would like to be paid. Have a restful weekend.

– Thanks, but no thanks. It sounds like a dream gig for any entertainer: hosting the three-hour pre-telecast ceremony for music’s biggest night, the Grammys, which are scheduled for Jan. 31.

But when it was offered to Tiffany Haddish, the comedian turned it down. The reason? She says she was expected to work for free. Worse still, she’d have to cover other expenses related to the job, like hair, makeup, and wardrobe.

“All of that would have to come out of my pocket,” she told Variety. “I don’t know if this might mean I might not get nominated ever again, but I think it’s disrespectful.” (Haddish is up for Best Comedy Album this year, her second nomination.)

The Recording Academy, a not-for-profit that puts on the Grammys, is responsible for the pre-telecast ceremony and says that previous hosts have performed for free. But interim CEO of the Academy Harvey Mason Jr. said in a video posted to Instagram that it was wrong for the talent booker to tell Haddish that the organization wouldn’t even cover her expenses for the event.

“That was wrong,” Mason said. “It was a lapse in judgment. It was in poor taste. And it was disrespectful.”

The story smacks of past instances in which Hollywood has woefully underpaid female artists compared to their male counterparts. See: Michelle Williams, Gillian Anderson, Claire Foy, Octavia Spencer, and far too many others.

Plus, it’s a serious black eye for the Recording Academy, which is trying to shake a reputation for being sexist, discriminatory, and out-of-touch.

Not even a year ago, it put its first-ever female president and CEO Deborah Dugan on leave five months after hiring her due to a “formal allegation of misconduct.” Dugan countered with an EEOC complaint that said her suspension was retaliation for her calling out sexual harassment, corrupt voting procedures, and conflicts of interest among board members at the organization. At the time of the filing, the Academy didn’t respond directly to Dugan’s claims, but it formally fired her in March after investigating her tenure at the organization, citing her “consistent management deficiencies and failures.”

The Academy had hired Dugan as it was trying to clean up another mess. In 2018, then-president Neil Portnow triggered fierce blowback when he said more women needed “step up” if they wanted to be recognized at the Grammys.

If the Academy is looking to move past these scandals; to signal that it values female talent, whether among executives or recording artists, asking Haddish to pay her way onto the Grammys stage is clearly a step backwards.

- Chancellor's compromise. German Chancellor Angela Merkel brokered a compromise allowing the EU to agree on a $2.2 trillion budget and stimulus package. Germany holds the bloc's rotating presidency. The deal had been held up by Hungary and Poland, which refused to sign onto rules that would allow the body to strip either country of EU funds based on their treatment of democratic institutions. The Christine Lagarde-led European Central Bank, meanwhile, unveiled its own new stimulus package. New York Times

- Tough negotiations. Next year's international climate talks, the COP26 conference, are set to take place in Glasgow. World leaders and climate activists are calling on the organization's leadership to include more women in top roles at the global event. Forty-five percent of senior management there are set to be women, but many are in "supporting and communications roles" rather than negotiating positions, the group says. Financial Times

- Diaper duty. Fortune's Maria Aspan talks to Shazi Visram, founder of the baby food business Happy Family Organics, who has now pivoted to selling a "cleaner diaper." That mission involves getting the approval of advocacy organization the Environmental Working Group for a product that touches a child's "largest organ"—the skin—for the first years of their life. Fortune

- Childcare in crisis. Bloomberg goes deep on the childcare crisis, forecasting that fixing access to childcare could add $1.6 trillion to U.S. GDP. That number comes from measuring the rate at which women would enter and stay in the workforce with access to subsidized childcare. Bloomberg

- Been saying yes instead of no. Taylor Swift at midnight today released evermore, her second surprise album in less than six months. The pop star calls the new album a sister record to July's folklore; the strategy is also in line with industry trends, with artists releasing music more frequently and casually. Wall Street Journal

- One for the ages. The New Yorker's Jane Mayer takes on a sensitive issue: the aging of U.S. lawmakers. Specifically, Mayer reports on Sen. Dianne Feinstein, who is, at 87, the oldest member of the Senate. In prior eras, any cognitive decline among members of Congress was ignored or not talked about—an approach that's no longer possible with broadcast hearings and social media. The New Yorker

- Antitrust solidarity. EU antitrust chief Margrethe Vestager offered her support to the U.S. officials who have taken on Facebook's dominance in a new lawsuit. Vestager, known for her tough regulation of tech giants in Europe, says the move is a "sign that the debate on tech dominance has been shifting over the last couple of years." Fortune

I was certain I wanted two children. Then the pandemic happened Elle

"It’s something that I could have never expected, given what I was told. And I believe I had something to do with it. I’ve crafted some part of this moment in time."