Could Biden finally get the national minimum wage to $15? 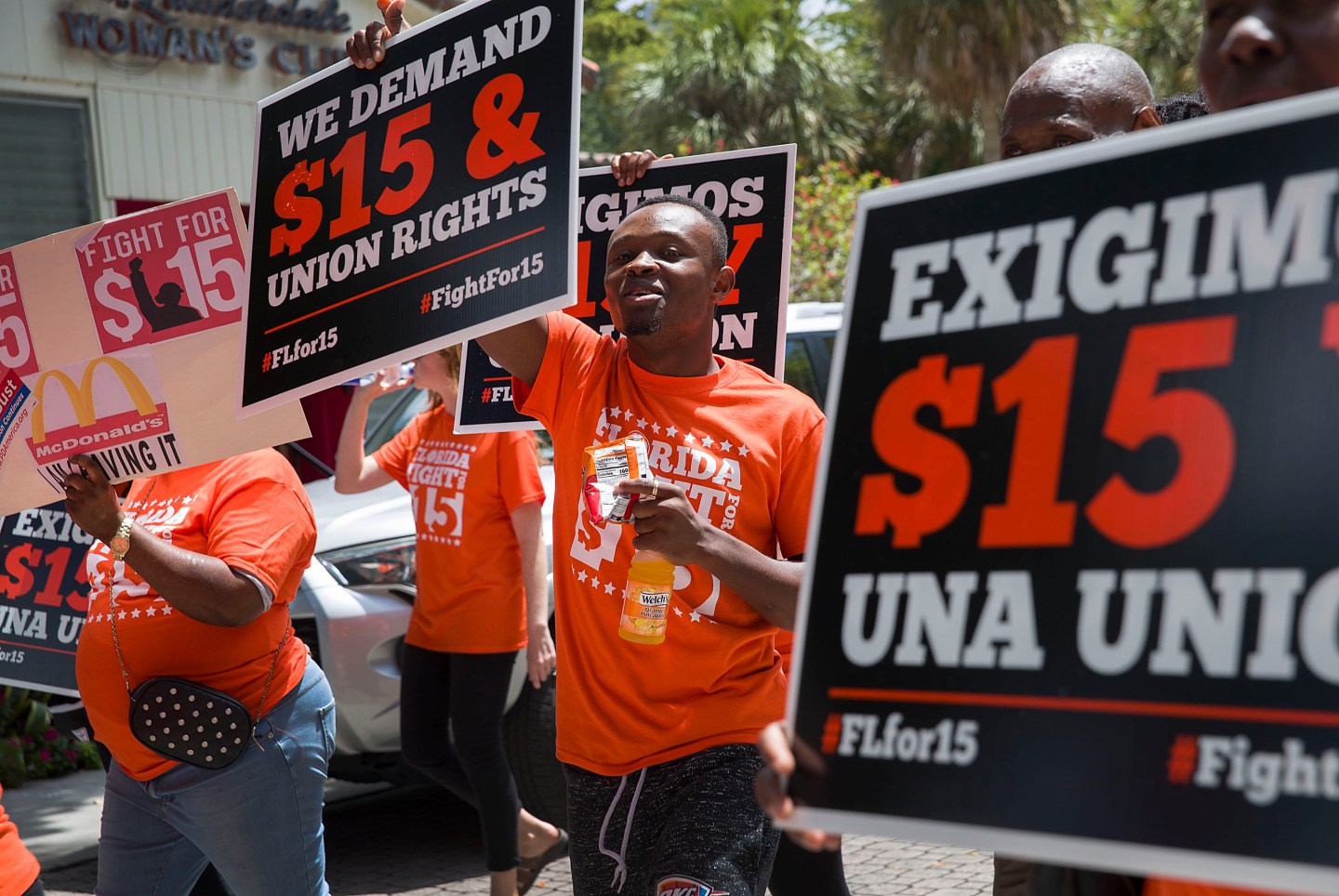 On Election Night last month, one of the most hotly anticipated results from the state of Florida—beyond which presidential candidate would capture the battleground state—was voters’ decision on a proposed near-doubling of the minimum wage.

Ultimately, Floridians voted decisively to raise the Sunshine State’s minimum wage to $15 by 2026, despite the fact that President Trump won the state’s electoral votes and that Florida’s Republican leaders, including its governor, had campaigned hard against the wage boost.

That vote, coupled with the same result in a similar referendum in Portland, Maine, that day, and President-elect Joe Biden’s avowed support for a national $15 minimum wage, promises to reenergize the push to raise it nationwide from a rate that has stood unchanged at $7.25 since 2007.

The Florida and Maine votes “are additional pieces of wind at the back of President-elect Biden and Vice President–elect Harris to take bold action on the $15 minimum wage,” says Mary Kay Henry, international president of the Service Employees International Union, which has 2 million members in the U.S. and Canada, and the leader of the Fight for $15 advocacy group.

But there’s a catch: Whatever the incoming Biden administration’s intentions, any hopes of passing a $15 minimum wage nationally will hinge on the pair of Senate runoffs in Georgia next month pitting Republican incumbents Kelly Loeffler and David Perdue against Democrat challengers Raphael Warnock and Jon Ossoff, respectively.

If Democrats prevail in both races—and that’s a big “if”—the party would have half of the seats in the Senate, with Harris as the tiebreaker as vice president. That narrow majority would give Democrats the power needed to pass a bill similar to the 2019 Raise the Minimum Wage Act passed by the Democrat-controlled House of Representatives.

Still, one of the takeaways in the paradoxical Florida vote is that it shows support for the $15 wage does not necessarily fall cleanly along partisan lines. Florida, a tourism-heavy place with 1 million service workers, became the ninth state to pass such a proposal.

The minimum wage debate is one that flares up periodically in the U.S. While anti-poverty advocates see a higher wage as a tool to lift millions of Americans financially at time of growing income inequality, opponents, including trade organizations representing retailers, restaurants, and other service industries, see it as unnecessary, employment-stifling regulation.

All told, there aren’t all that many Americans making the current national minimum wage. Some 1.6 million workers, or 1.9% of all people paid an hourly wage, make $7.25 (or less if they earn tips too), according to the Bureau of Labor Statistics.

But an increase would have a trickle-up effect on people currently making more than that, since those people will demand to continue being paid above minimum wage, says Columbia Business School assistant professor Christian Moser, who is also a senior research economist at the Federal Reserve Bank of Minneapolis. The Congressional Budget Office last year found that a $15 minimum wage by 2025 would increase income for some 27 million workers.

The push for a national $15 minimum wage first gained steam in the aftermath of the 2011 Occupy Wall Street movement. President Obama took a shot at it in 2013, gunning for $9 by 2015, but that effort was thwarted by Republicans. That left many local governments to take it upon themselves to raise minimum wage in places like Seattle and California.

Then, in a surprising plot twist, some large companies began raising their internal floor wages to $15 on their own, starting with Amazon in 2018. Target this summer raised its own minimum wage to that level, bringing it to 50% above 2017 levels, prompted by the need to keep workers and motivate them at a time work in stores is more complex than ever.

Other retailers have been less keen about an across-the-board-increase. Macy’s, for one, says compensation should reflect local conditions. “We prefer going on a market-by-market basis,” Macy’s CEO Jeff Gennette recently told Fortune. “The cost of living is very different depending on what part of the country you’re in.”

And Home Depot’s finance chief, Richard McPhail, said wages are but one component of worker compensation. “We focus on more than wage. We focus on career opportunities and benefits,” he said in an interview.

Many retailers, notably Kroger and Walmart, have offered bonuses to store workers during the pandemic but stopped short of raising floor wages to $15 permanently.  (Walmart’s lowest wage is $11 per hour, but the company provides a minimum of $15 for certain jobs like deli and bakery workers. A spokeswoman for the retailer says that bonuses, paid time off, and benefits should be factored into any assessment of its compensation beyond hourly wages.)

“The retailers that are hiring are having to hire at higher wages because it’s difficult to find workers,” says French. “The market is working.”

What’s more, with many stores and restaurants struggling during the ever-worsening COVID-19 pandemic, opponents argue mandated wage increases could push many companies over the edge. (Minimum wage increases have typically been phased in over a number of years to allow businesses to adapt.)

“Restaurants are spending more to keep their doors open, while being told they can serve fewer customers. Dramatic hikes in labor costs will push many restaurants into immediate bankruptcy,” Sean Kennedy, executive vice president of public affairs at the National Restaurant Association, told Fortune in an e-mailed statement.

In the meantime, all eyes are on Georgia next month. The big companies seem to be sanguine about it. (French says the NRF has not talked to its members about the $15 minimum wage push recently, suggesting they don’t see a big threat.) And the Democrats know winning both seats in a Republican-leaning state won’t be easy. But the $15 proponents see a rare opening.