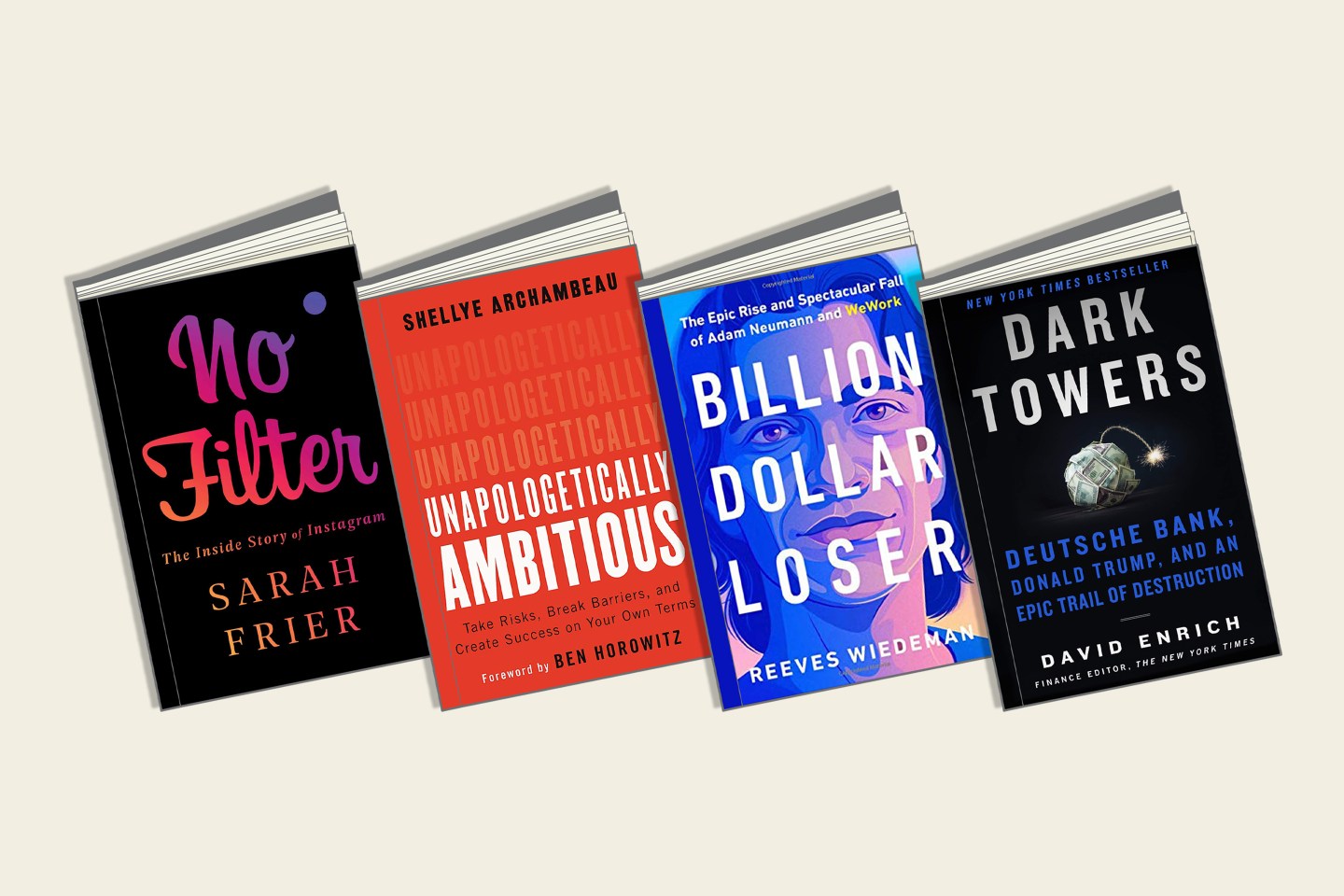 Including books about the rise of Instagram and the fall of WeWork, as well as the ultimate inside look at Donald Trump’s relationship with Deutsche Bank.
Courtesy of Simon & Schuster, Grand Central Publishing, Little Brown and Company, Custom House

These aren’t just self-help or how-to guides about launching your startup for the umpteenth time or networking with someone you really have no interest in conversing with ever again. These are articulate, well-researched works with concrete and valuable lessons that can be applied to your professional life.

The following are 10 of the best business books published in 2020, in alphabetical order by title.

“Billion Dollar Loser: The Epic Rise and Spectacular Fall of Adam Neumann and WeWork”
Courtesy of Little Brown and Company

Even before the pandemic started and everyone shifted to working from home, WeWork was in trouble. The coworking-space giant was already out of control, and so much of that chaos stemmed from its founder, Adam Neumann, as examined in Billion Dollar Loser (Little, Brown), a wild and well-researched book by New York magazine writer Reeves Wiedeman. This is truly the Bad Blood equivalent of 2020, tracing WeWork’s astronomical rise and unbelievable work culture that seemed too good to be true—because so much of the company’s business success was rooted in exaggerations and hyperbole to begin with.

There is so much about Donald Trump’s business dealings that we still don’t know. But in Dark Towers (Custom House), New York Times finance editor David Enrich pulls the curtain back on one of the biggest mysteries in the Trump portfolio: the curious and mind-boggling relationship with Deutsche Bank. Like much else in Trumpland, a lot of what happened doesn’t make sense, from the massive loans to the Kushner family and Trump—much of which is expected to be called up for payment when the President finally leaves the White House. But Enrich does a fine job of navigating all the serpentine narratives in organized fashion, such as offering a detailed look at Deutsche Bank’s history, which included propping up another default-prone American developer as far back as the 1880s.

Golden Gates: Fighting for Housing in America by Conor Dougherty

With propulsive storytelling and ground-level reporting, New York Times journalist Conor Dougherty chronicles America’s housing crisis—pinpointing San Francisco as the current epicenter as the wage gap grew to an impossible divide before the pandemic. Dougherty examines decades of history and economic forces that brought us here, taking readers inside activist uprisings that have risen in tandem with housing costs. Sweeping in scope and intimate in detail, Golden Gates (Penguin Press) captures a vast political realignment during a moment of rapid technological and social change as punishingly high rents and the prohibitive cost of ownership have turned housing into the foremost symbol of inequality and an economy gone wrong.

“If Then: How the Simulmatics Corporation Invented the Future”
Courtesy of Liveright Publishing Corporation

If Then: How the Simulmatics Corporation Invented the Future by Jill Lepore

They say history repeats itself. But sometimes, it’s so plainly obvious that it’s hard to dismiss as a cliché. New Yorker staff writer and Pulitzer Prize nominee Jill Lepore offers a cautionary tale in If Then (Liveright), connecting the darkest secrets of U.S. intelligence during the earliest days of the Cold War to our present-day debate over privacy and surveillance and just how unchecked Big Tech firms have become. Founded in 1959, the Simulmatics Corporation mined data, targeted voters, manipulated consumers, destabilized politics, and disordered knowledge. (Sound familiar?) Of course, it’s not exactly a household name today, and despite a client list that included John F. Kennedy}s presidential campaign, the Department of Defense, and even the New York Times, the company shut down in 1970. Lepore explains what went wrong and what we desperately need to learn in handling our current reality of misinformation and bad polling, as well as the gluttonous amount of private data being uploaded instantly from our phones on a constant basis.

“It’s About Damn Time: How to Turn Being Underestimated Into Your Greatest Advantage”
Courtesy of Currency

It’s About Damn Time: How to Turn Being Underestimated Into Your Greatest Advantage by Arlan Hamilton with Rachel L. Nelson

In 2015, Arlan Hamilton was living on food stamps and sleeping on the floor of San Francisco International Airport, with nothing but an old laptop and a dream of breaking into the venture capital business. Hamilton recounts how she couldn’t understand why startup founders all looked the same: white and male. Hamilton wanted the chance to invest in the ideas and people who didn’t conform to the expected image of how a founder is supposed to look. Fast-forward five years, and Hamilton is now founder and managing partner of Backstage Capital, a venture capital firm dedicated to minimizing funding disparities in tech by investing in founders who are female, people of color, or members of the LGBTQ community. Despite the extreme inequality—especially for women of color—in Silicon Valley and the business world at large, Hamilton argues in It’s About Damn Time (Currency) that a privileged background, an influential network, and a fancy college degree are not prerequisites for success, further suggesting that being undervalued simply means that a bigger upside exists.

“No Filter: The Inside Story of Instagram”
Courtesy of Simon & Schuster

No Filter: The Inside Story of Instagram by Sarah Frier

In No Filter (Simon & Schuster), Bloomberg reporter Sarah Frier chronicles the rise of photo-sharing social network Instagram, from when it was still a location-based app named “Burbn” to the ad-driven juggernaut it is today. Given the turnover and pressure the company has experienced over the past decade—as Frier deftly streamlines from multiple interviews with some of the most high-profile executives, venture capitalists, and most-followed celebrities on Instagram—it’s remarkable the mobile app still exists in relatively the same format that made it a cult favorite among early adopting designers, photographers, and creative professionals.

“The Art of Showing Up: How to Be There for Yourself and Your People”
Courtesy of Experiment

The Art of Showing Up: How to Be There for Yourself and Your People by Rachel Wilkerson Miller

It’s been a rough year for everyone, no matter your situation in life. And that’s going to take a long-term toll on our collective mental health. Suffice to say, showing up is harder than ever. But it’s also more important than ever—both for yourself and your colleagues. Part manifesto, part guide, The Art of Showing Up (The Experiment) is the millennial’s Chicken Soup for the Soul as VICE editor Rachel Wilkerson Miller charts a course to kinder, more thoughtful, and more fulfilling relationships—starting with learning how to define your needs, reclaim your time, and commit to self-care.

“The Hot Hand: The Mystery and Science of Streaks”
Courtesy of Custom House

The Hot Hand: The Mystery and Science of Streaks by Ben Cohen

Like luck or karma, it’s easy to believe in streaks. But is there any scientific or mathematical fact to them? In The Hot Hand (Custom House), Wall Street Journal reporter Ben Cohen offers an entertaining and provocative investigation into this question. For decades, statisticians, social scientists, psychologists, and economists have spent endless amounts of time studying and debating whether streaks actually exist. Cohen dives into some potential real-world examples where streaks could be real (or backfire), from the roulette wheel on a casino floor to the success of the Golden State Warriors, with Stephen Curry becoming the greatest three-point shooter in NBA history.

Unapologetically Ambitious: Take Risks, Break Barriers, and Create Success on Your Own Terms by Shellye Archambeau

One of Silicon Valley’s first female African-American CEOs, Shellye Archambeau recounts in Unapologetically Ambitious (Grand Central) how she overcame the challenges she faced as a young Black woman, wife, and mother, managing her personal and professional responsibilities while climbing the ranks at IBM and subsequently in her role as CEO. Part memoir, part motivational business book, Archambeau details the risks she took and the strategies she followed to steer her family, her career, and her company toward success.

Anna Wiener’s memoir about her transition from the traditional publishing world of New York City to the startup explosion in and around San Francisco in the years following the Great Recession struck a chord when it was released in early 2020. That’s partially because Wiener said (or printed) what so many people pushed to the sidelines—often based on gender or ethnicity, if not both, among other factors—have been thinking for years about the “culture” of the tech industry, but were not in a position of power to express publicly without repercussions. It might seem as if all of a sudden there are a lot of books revealing the “bro” culture pervasive in Silicon Valley, but for those who experienced it firsthand, titles like Uncanny Valley (MCD) are only scratching the surface of the dark side of unchecked power in the startup world.