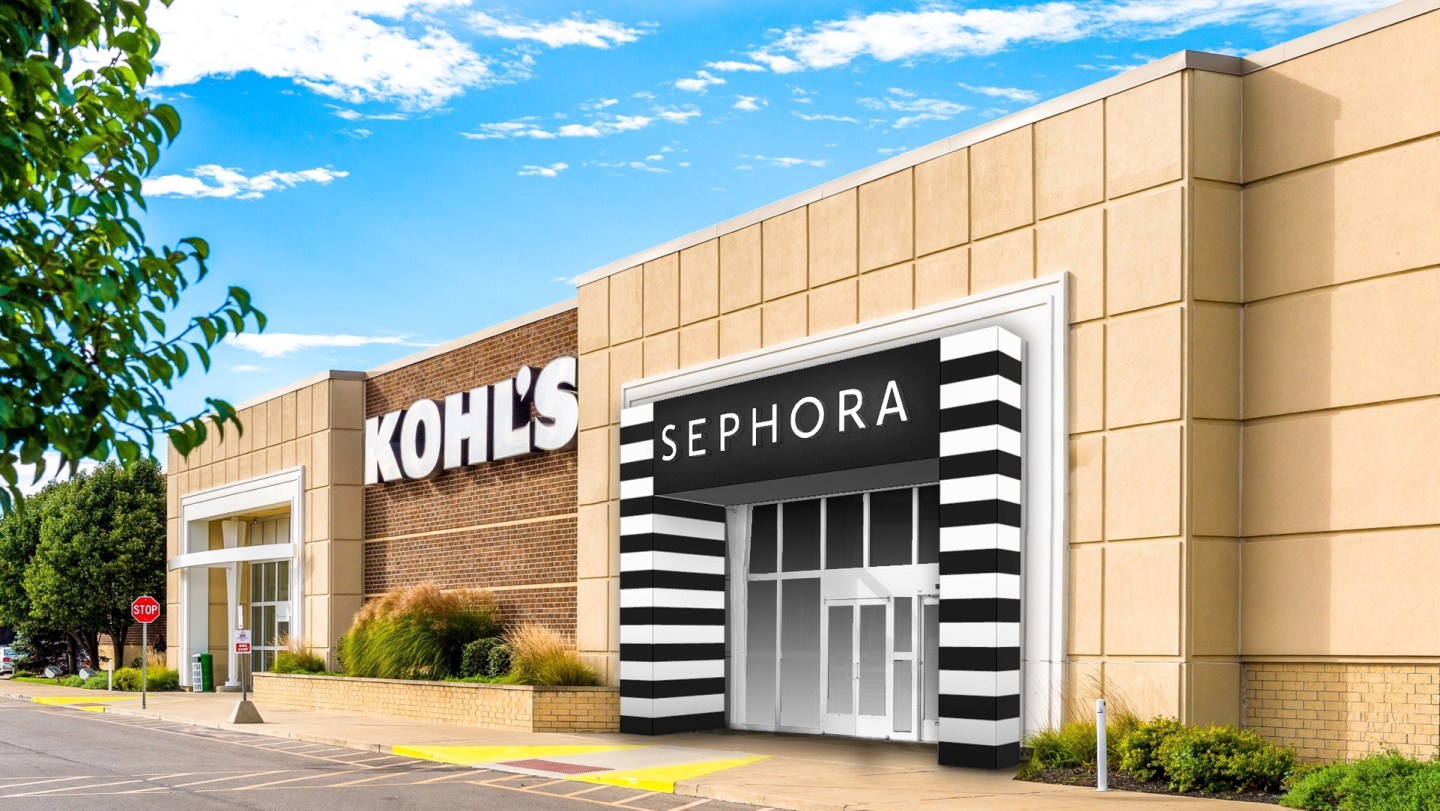 Kohl’s will begin opening Sephora shops within its stores in 2021, the companies announced on Dec. 1, 2020.
Courtesy Kohl's

The beauty retailer will open 850 permanent Sephora shops inside Kohl’s stores by 2023, the companies said on Tuesday. The 2,500 square-foot shop-in-shops will replace the arrangement Sephora has had for years with J.C. Penney, which earlier this year filed for bankruptcy protection and has closed hundreds of stores.

The 10-year partnership will instantly catapult Kohl’s into the major leagues of beauty, a category in which it has tried to carve a niche for itself in recent years to little avail, putting it at a big disadvantage among rivals like Penney and Macy’s. And it will allow Kohl’s, which has 1,100 stores in all, to better compete with its strip-mall rivals Ulta Beauty and Target, which announced a similar arrangement only three weeks ago.

Sephora and Kohl’s, which started talking about the potential partnership around the time Penney filed for Chapter 11 bankruptcy in the spring, will start with 200 locations next year, and build up to 850 by 2023.

The shops will offer some 100 brands, many higher-end and quite a few exclusive to Sephora, and will carry about 90% of what a stand-alone Sephora does. Sephora will train the Kohl’s employees staffing the shops. They will replace Kohl’s current beauty areas.

In October, Kohl’s chief executive Michelle Gass announced a turnaround plan to return the retailer to growth after years of treading water. The strategy hinges on finally developing a sizable beauty business, essential for drumming up store traffic and winning the younger shoppers Kohl’s needs to survive.

“By partnering with Sephora, this will quickly help Kohl’s become a leading player and destination in the beauty industry,” Gass told Fortune.

For Sephora, which is owned by French luxury conglomerate LVMH, the partnership is a way to replace business lost amid the hundreds of J.C. Penney store closings in recent years. When Penney and Sephora struck their deal in 2006, Penney was about three times its current size in terms of store count and revenue. (In an emailed statement, J.C. Penney said that the company’s partnership with Sephora “remains strong and will continue until the end of the agreement. In tandem with operating Sephora inside J.C. Penney throughout that time period, we are developing a new, inclusive beauty concept that offers our customers a wide array of product.”)

What’s more, Sephora stores tend to be in city centers, minimizing overlap with Kohl’s. So the thinking is that Kohl’s will get Sephora in front of new customers and away from the shopping malls that are home to Penney and have been withering for years. The vast majority of Kohl’s stores are in strip centers or stand-alone.

“The problem we had is that our store network is primarily in urban malls and downtowns,” said Jean-André Rougeot, president and CEO of Sephora Americas, in an interview. He added that his stores “don’t allow us to reach deep into suburbia.” For Sephora, the hope is to reach “many millions of new customers,” Rougeot said.

Kohl’s will give Sephora prime real estate within its stores and at many locations will have large signage on the exterior of the store.

The challenge for Kohl’s will be to avoid the trap Penney fell into, thinking that Sephora was a panacea to its overall difficulties. In the past few years, Penney struggled to get people coming into its Sephora shops to visit the rest of the store.

Kohl’s is betting that its strategy to build up its activewear business centered on Nike, Under Armour, and Adidas by 30%, and to reinvigorate its housewares business while dropping weak store brands, will make its stores more alluring.

“Winning in beauty is a key part of that,” said Gass.

Editor’s note: This story has been updated to include a statement from J.C. Penney.