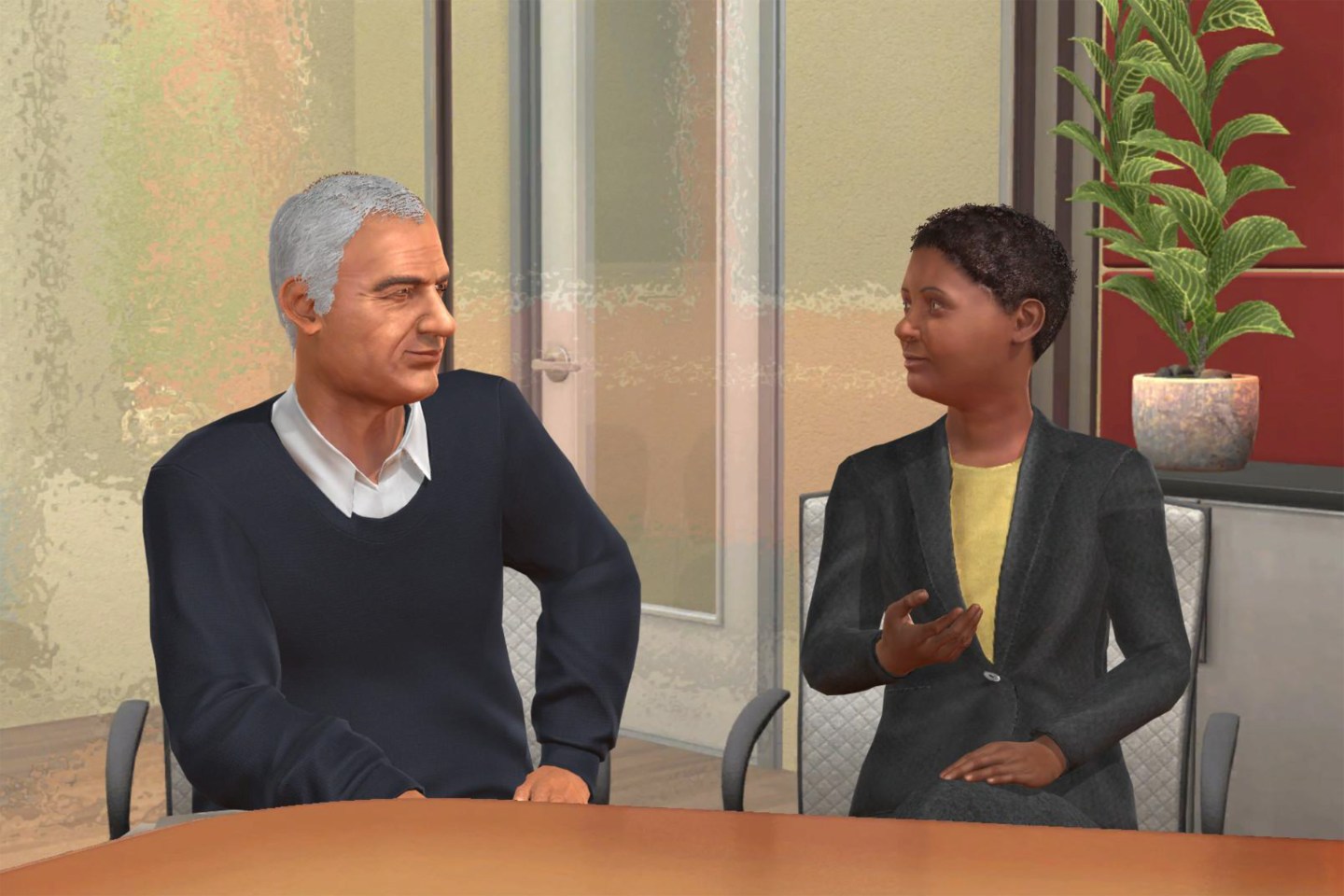 Hugo and Maia are having a hard time working out their differences in this Mursion training simulation.
Courtesy of Mursion

He’s sitting across from me, arms crossed, face scowling, exuding bad energy. Sitting next to him is Maia. She’s singing the praises of a third colleague, Denise, who is up for a promotion. “She gets glowing reviews from her supervisors. She’s clearly overdue for this promotion. I’ve worked a lot with her and think she’s ready.”

Hugo does not agree. “I have a lot of reservations about Denise,” he says. “In a recent meeting she just shut me down. She’s so…aggressive. And that accent…”

“Okay…Let’s not get personal and instead focus on her work accomplishments!” I hear myself say in a high-pitched tone my children would be familiar with. “Have you seen her run meetings before, and what has your impression been?” I ask, gesturing to the woman and suddenly fumbling both their names. My blood pressure begins to rise. Hugo continues to glower at me.

“Actually, yes, I was in that meeting he’s talking about,” offers Maia. “It was a very technical presentation, and I think all she said was that she preferred to wait to take questions at the end—she wasn’t shutting you down, Hugo.” She, too, crosses her arms and perceptibly rolls her eyes.

Then they both turn to me expectantly, waiting for my reaction.

Luckily this uncomfortable moment didn’t take place in a real office, but in a virtual one. It’s a simulation designed by a startup called Mursion, which makes “immersive virtual reality training for emotional intelligence in the workplace” to help employees and managers “practice” diffusing, redirecting, and de-escalating office conflicts.

After the session, an avatar named “Bennett” (pictured below) talked me through how it went, and what I could work on for next time. We agreed that while I did a decent job “redirecting” the conversation after Hugo’s repeated microaggressions, it would have been even better to try to demonstrate to Hugo some ways in which Denise’s work had already contributed to the success of the team. I instantly wanted some training—and a do-over.

That’s exactly the point, says Mursion CEO Mark Atkinson, who chatted with me after my “meeting.” Turns out Bennett, Hugo, and Maia were all played by the same “simulation specialist,” who was responding to everything I said and adjusting the conversation accordingly. “A bot can’t create that kind of stress,” laughs Atkinson. He says a single specialist can play up to seven roles, and scenarios can start slow or be dialed “way up” to produce extremely cold-sweat-inducing interactions if a company desires it.

The software was originally developed at the University of Central Florida to help teachers in the school of education practice working with special needs children before moving on to real students. But as soon as Atkinson saw a demo, he knew it could play a huge role in the corporate world. “So much of what we’ve experienced is learning that is pushed at you, but we don’t get to show mastery,” he says. Aside from an occasional cringeworthy off-site exercise, most managers are simply thrown into tough conversations and have to tread water.

Mursion, which works with many Fortune 1000 companies including T-Mobile, Coca-Cola, Google, Johnson & Johnson, Blue Cross Blue Shield, and Genentech, is carving out a niche with companies that actually want their employees to get better at communicating. That involves everything from leadership development, customer service, performance reviews, diversity and inclusion training, and, yes, settling office conflicts.

For instance, they are currently working with a large chain to train employees on how to deal with customers who refuse to wear masks. Another client is a large Asian tech company that has a very hierarchical structure and cannot get talent in Silicon Valley. Atkinson says they’re working with their engineers on “communication style” to get them more comfortable talking to diverse U.S. prospects.

Mursion is projecting revenues of $20 million for the fiscal year which ends June 30, a figure Atkinson says is double the previous year. On Monday, the company announced $20 million in new funding from Leeds Illuminate, whose managing partner Susan Cates has spent much of her career investing in companies that help train and develop leaders.

Cates confides that Atkinson actually let her try the simulator early on—and he later used the demo to evaluate potential board members. He picked a module where the “leader” had to deliver hard feedback to a colleague, and most of all was “looking for empathy,” he says. But even though they knew they were being watched, Atkinson recalls, “I saw some people become very aggressive, really taking their colleagues to the woodshed!”

That was eye-opening. And indeed the disconnect between how we think we’re perceived—and how people really see us—may be Mursion’s next growth area. Atkinson says the company is currently working on analytics that give feedback on “how you come across, what we can tell about you from your tone of voice, facial gestures, and how people are reading you.”

I’d definitely try it. And might recommend Hugo do the same.