Meet the new second most powerful woman in Congress 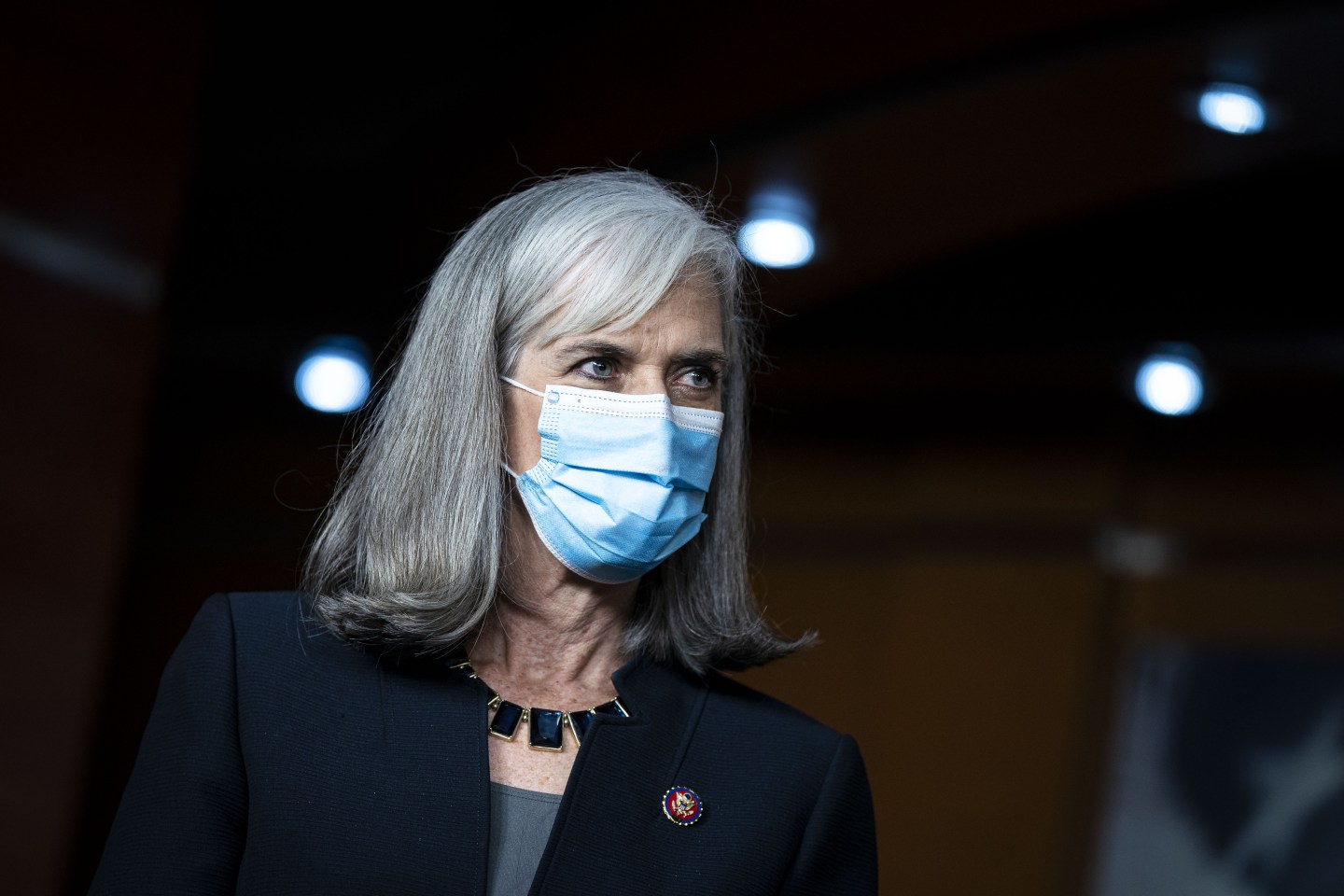 Good morning, Broadsheet readers! Women lead in the Grammys’ rock categories, Meghan Markle writes a moving essay about miscarriage, and Rep. Katherine Clark will be the second most powerful woman in Congress. The Broadsheet will be off on Thursday and Friday for Thanksgiving—have a wonderful holiday if you’re celebrating. We’ll see you back here on Monday.

– Full house. For years, the Democratic caucus has been led by House Speaker Nancy Pelosi. But Pelosi has always been the lone woman at the top in Congress.

Next term, Pelosi will be joined by Rep. Katherine Clark, the Massachusetts congresswoman. Democrats elected Clark to the role of assistant speaker last week in a race against Rhode Island Rep. David Cicilline.

The role doesn’t determine who is next in line for the speakership, but Clark’s ascension to the No. 4 position in the House of Representatives is notable nonetheless. Clark is only the second woman, after Pelosi, to ever serve in House leadership and will be the second most powerful woman in Congress. She will play an important role in setting the House Democrats’ agenda—during a two-year stretch that could be Pelosi’s last in the speakership (in 2018, Pelosi promised some members of her party that she would only seek two more terms in the top job).

In an interview with Fortune, Clark reflected on reaching gender parity in House leadership and setting goals for the Democrats this session. “We represent 51% of our population. It’s long past time that we give up the idea that ‘one woman is enough,'” she said of joining Pelosi at the top.

Clark, who was first elected to Congress in a 2013 special election, has long been a passionate advocate for accessible childcare and says that supporting both childcare workers and parents who need affordable care for their kids will be one of her top priorities come January.

Read the rest of her interview here.

- 'The losses we share.' Meghan, The Duchess of Sussex writes a personal, emotional op-ed for the NYT about suffering a miscarriage earlier this year. "Sitting in a hospital bed, watching my husband’s heart break as he tried to hold the shattered pieces of mine," she writes, "I realized that the only way to begin to heal is to first ask, 'Are you OK?'" New York Times

- And the nominees are. 2021's Grammy nominations are led by Beyoncé, with nine nods, followed by Taylor Swift and Dua Lipa. The Best Rock Performance category is one to watch this year; all six nominees—Big Thief, Fiona Apple, Phoebe Bridgers, Haim, Brittany Howard, and Grace Potter—are female artists or women-fronted bands. Vulture

- On board. Germany is the latest European country to introduce a quota for women's representation on corporate boards of directors. The details are still being finalized, but the coalition government agreed to a measure last week. Women hold just 12.8% of these roles in Germany now, compared to between 20% and 30% in similar EU economies. CNN

MOVERS AND SHAKERS: Jan Singer is out as J.Crew CEO after less than a year in the role, succeeded by Libby Wadle, the CEO of J.Crew's Madewell brand. Ann Shoket's New Power Media has acquired invitation-only women's community TheLi.st, which was founded by Glynnis MacNicol and Rachel Sklar. Susan McPherson of McPherson Strategies will be joining the group's board. Ford hired former eBay CMO Suzy Deering as global CMO. IAC promoted Kendall Handler to SVP and general counsel. Define Ventures founder Lynne Chou O'Keefe joins the board of Hims & Hers.

- Eyes on YouTube. Senate Democrats including Amy Klobuchar and Mazie Hirono wrote to YouTube CEO Susan Wojcicki this week, expressing concern about misinformation on the platform. The senators are especially worried about the spread of misinformation ahead of Georgia's two Senate runoff races in January. CNBC

- Thrift this. Congresswoman-elect Cori Bush made headlines this month talking about her plans to source her Capitol Hill wardrobe from thrift stores. In this piece, the Missouri representative reflects on what thrift stores have meant to her—and offers her top tips for finding their best-quality items. Glamour

- Georgia watch. In a new interview, Stacey Abrams discusses the 2020 election's Democratic victories in Georgia and the decade-plus of work that led to them. Of divisions in the Democratic Party, Abrams says, "It is our burden and our benefit that we are faced with diversity," comparing the party to the GOP. New York Times

Children of quarantine The Cut

Almost half of NYC's public school teachers have kids at home—how are they managing the shutdown? Vogue

-Incoming Delaware State Sen. Sarah McBride, the highest-ranking transgender legislator in the U.S., responding to someone who asked if she was "a boy or a girl"