Why Trump made gains among minority men against Biden 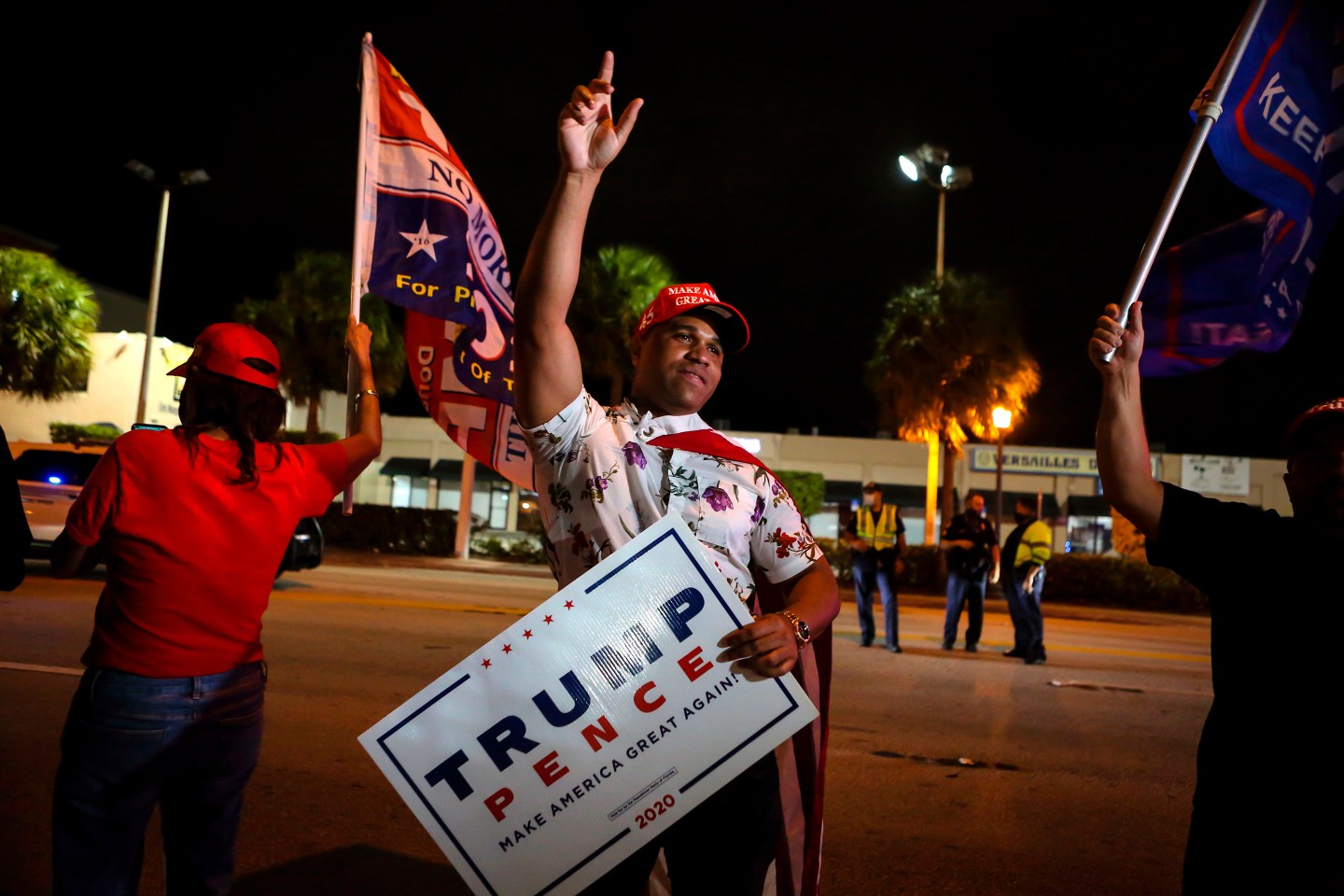 Supporters of President Trump rally in Miami on Nov. 4, 2020. President Trump made gains among Black and Latino men in the 2020 election, including some rapper endorsements, explain Stephanie Muravchik and Jon A. Shields.
EVA MARIE UZCATEGUI—AFP/Getty Images

Despite courting white nationalists as President, Donald Trump remains popular among a minority of Latinos and Blacks. Strong support from Latinos in Florida helped deliver the Sunshine State to the President. Meanwhile, exit polls suggest that Trump is gaining in popularity among minority men, with 18% of Black men and 36% of Latino men voting for Trump.

What accounts for Trump’s cross-racial appeal? It’s partly because of honor culture. In such a culture individuals—and men especially—are expected to defend their reputation for toughness. They must never back down or let even a small slight slide. Failure to do so is always read as weakness.

Honor culture is not just deeply rooted in the white working-class communities that have embraced Trump, it is common in Black and Latino communities as well. There, too, men must always project strength by respecting what sociologist Elijah Anderson called the “code of the street.” In the vernacular of the street, one must always “step up” when disrespected.

Trump, a child of Queens and a tough Scots-Irish mother, also believes he must always step up, as his endless Twitter feuds suggest. As Trump once put it: “Real power is fear. It’s all about strength. Never show weakness. You’ve always got to be strong. Don’t be bullied. There is no choice.”

Exit polls show that his supporters especially admire the President’s strength. When asked to identify the quality that mattered most in voting for President, a 32% plurality of voters said “a strong leader.” Among those citizens, 71% voted for Trump. That figure was even higher in heavily Latino Florida, where 81% of such voters did likewise. Americans who selected other qualities—especially “good judgment” and ability to “unite the country”—swung overwhelmingly for Biden.

Long before the 2020 election, Trump was also celebrated in rap music as a folk hero, as a symbol of manly power and entrepreneurial cunning. That’s not surprising. The ideal male in much hip-hop is Trumpian: He is brazen, tough, and flashes garish emblems of financial success and power.

A steady stream of rap artists have expressed admiration for Trump’s power, including Kayne West, 50 Cent, Lil Wayne, and Lil Pump, among others. Kayne West famously said that he and Trump are both fierce creatures: “We are both dragon energy. He is my brother.” Lil Pump endorsed Trump by questioning Biden’s strength: “Fuck sleepy Joe.” Rap artist 50 Cent, meanwhile, has repeatedly noted that Trump has the “attitude of a rapper.”

After spending the past few years living in working-class Democratic communities that voted for Trump, we are not surprised by the President’s cultural appeal across racial lines. Because they are also shaped by honor cultures, the people we spoke with sometimes even expressed admiration for minorities who share Trump’s bravado.

We met one woman who spent her life as a trucker and working in a corn processing plant in Iowa. When we asked about Trump, she told us: “I thought he’s got some braggadocio and he’s got some self-confidence we haven’t seen in ages.” She then compared Trump to Muhammad Ali: “He was a braggadocio [sic] and he performed. And people accepted him for that, they loved him for that.”

More often, the citizens we encountered praised Trump in general terms, for his “strength,” “energy,” and “balls.” They also admired long-serving Democratic politicians who respect their local honor culture.

Consider Joe Polisena, the Democratic mayor of Johnston, R.I., a heavily Italian-American town that unexpectedly supported Trump in 2016 and again in 2020. Polisena never lets an insult slide. As one local explained, “He could have 100 people who agree, one person not, and he’ll focus on the one person who doesn’t. And it kinda irks him.” Another said the mayor “rules with an iron fist.”

Polisena described his politics in ways that echo the code of the street. “I’m kinda like a street fighter when it comes to politics, because that’s the only thing that people understand,” he told us.

These common and more working-class cultural sensibilities, shared broadly across racial and ethnic groups, have been obscured for many reasons. One is simply because these groups have been divided politically. Black Americans, in particular, feel a strong group loyalty to the Democratic Party, one that is often reinforced by Trump’s unwillingness to repudiate white nationalists.

Honor culture is also hard for most journalists and academics to notice because they rarely live in one. Some may be reminded of such cultures when they watch plays like Hamilton, which recalls an age when our national leaders died in duels. But perhaps Hamilton misleads them too, at least insofar as it suggests that honor culture is a historical relic—a strange set of folkways in an age long gone.

Yet honor culture is not only alive and well—it is constantly renewed in America because it is a nation of immigrants. Long before waves of Latino immigration revitalized this cultural tradition in their urban enclaves, so too did the Irish, Italians, Japanese, and Portuguese. As long as we remain a nation of immigrants, some ethnic groups are bound to gravitate toward Trumpian candidates.

Stephanie Muravchik, an associate fellow at the Institute for Advanced Studies in Culture at the University of Virginia, and Jon A. Shields, an associate professor of government at Claremont McKenna College, are authors of Trump’s Democrats.