‘The world depends on us for the answer:’ How Sally Buzbee’s AP team will call the election 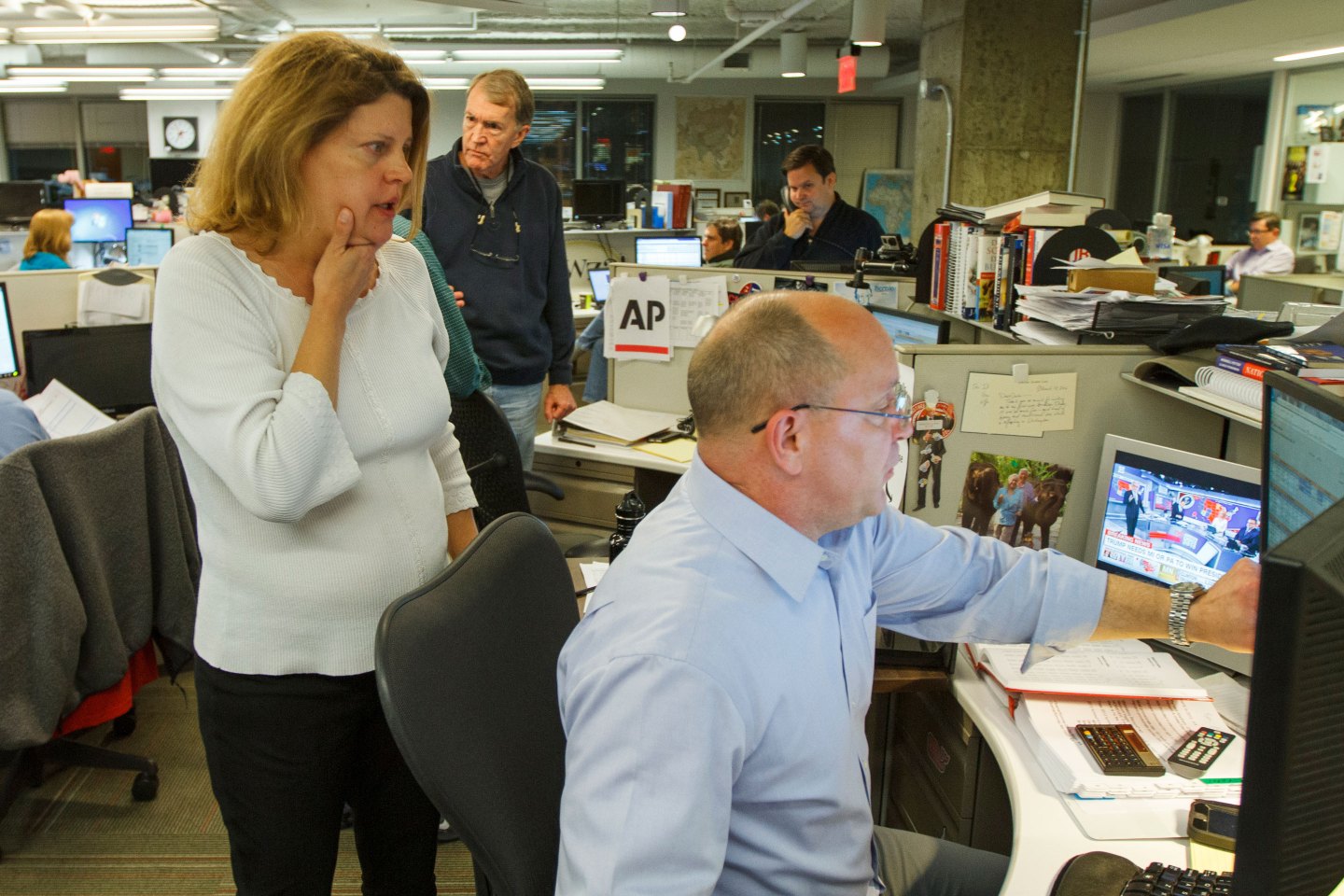 Then-Associated Press Washington bureau chief Sally Buzbee, talks with Stephen Ohlemacher, who in 2020 is the decision desk editor, early on Nov. 9, 2016, at the AP's Washington bureau. Buzbee is now executive editor of the AP and will oversee the team calling the 2020 elections.
Jon Elswick—AP Photo

Good morning, Broadsheet readers! Valerie Jarrett has a final pitch on Election Day, Jacinda Ardern assembles a diverse Parliament, and Sally Buzbee is behind the team of journalists that will call today’s election. Deep breaths this Tuesday!

– Making the call. How’s everyone feeling? Excited? Anxious? Already breaking into that stash of comfort food? Americans, along with so many observers the world over, are eagerly awaiting the results of Election Day 2020.

So much of the uncertainty around the vote is due to the unprecedented nature of this year’s contest. It’s taking place during a once-in-a-generation pandemic, with what’s expected to be record-high turnout due in part to more early voting than ever before. This year’s campaigns have spent more money than ever, and, of course, there’s President Donald Trump, whose extraordinary rhetoric has questioned steadfast democratic principles, like counting all legitimate votes.

Perhaps some good ol’ precedent will calm the nerves. The Associated Press today will deliver nearly two centuries of it.

The U.S. is unique in that it doesn’t have a national electoral commission. By default, news organizations have assumed that role, the AP chief among them. It has called every U.S. election since 1848. Starting today, under the leadership of executive editor Sally Buzbee, it will do so again by following its trademark process: it does not issue projections or name ‘apparent’ or ‘likely’ winners; it only declares the outcome of a race when a trailing candidate no longer has a mathematical path to victory.

To make those determinations in the presidential contest as well as 35 Senate, 11 gubernatorial, 435 congressional, and 6,000-plus down-ballot races, the AP relies on an army of more than 4,000 freelance local reporters who gather vote counts from county clerks across the 50 states, the New York Times reports. Those reporters relay the tallies to 800 vote entry clerks, who fact-check any anomalies before inputting the data into the AP system.

Each state has a ‘race caller,’ who works alongside an analyst from the AP’s politics team in D.C. to declare winners; another editor signs off on every call. Announcing the winner of the presidential race requires an additional set of eyes, that of AP’s Washington bureau chief Julie Pace.

“I am responsible for ensuring we get this right,” Buzbee told Poynter. “The world depends on us for the answer: Who won?”

Buzbee, with the AP since 1988, is overseeing her first presidential election as executive editor. The AP named her to the job days after the 2016 contest.

This year, voters rightfully have more questions about how election winners will be determined. The AP is taking the new step of publishing stories explaining how its experts called a race or why they’re holding back in a tight contest. Buzbee has said top AP execs will publicly explain the process in interviews if necessary.

Buzbee, for her part, has already been on a press blitz, making the case that the AP’s system is unswayed by outside forces, even in a year like this one.

“We have called the winner of every presidency without fear or favor or partisanship or any opinion of any person in our organization,” she told PBS. “We have called it on the facts and math year after year after year. This is not a magic show. This has been based on facts and math and state law. And all we’re doing is reporting what’s happening.”

- Valerie's vote. Just under the Election Day wire, former Obama admin official Valerie Jarrett has a final pitch in favor of Joe Biden. "We need a President who understands the challenges of working women," she writes, arguing that that candidate is the former vice president. Fortune

- Ministerial milestone. In New Zealand, Prime Minister Jacinda Ardern is assembling her new Parliament. One choice she made leads to a milestone: Nanaia Mahuta will be the country's first Indigenous female foreign minister. CNN

- Following the money. The most powerful women in the business world donate less to political campaigns than their male peers. Still, 21 female CEOs of S&P 500 companies contributed to political causes this election cycle. Oracle CEO Safra Catz donated the largest sum—$130,600 to President Trump's reelection bid. Most other CEOs gave to company-run PACs rather than to campaigns directly. BossBetty/Ms.

- Paradise lost. Denmark has been known as a haven for gender equality, but recently it's been reckoning with its own wave of the #MeToo movement. Says former Prime Minister Helle Thorning-Schmid: "One of the reasons why we haven’t really seen this before is that many people said to themselves, well, we are an equal society, so therefore we don’t have these problems. But the idea of Denmark as a gender paradise is a myth." Time

- Year in review. One year into her tenure as president of the European Central Bank, Christine Lagarde has put her own spin on the organization. Throughout this period of crisis, Lagarde has communicated with the public more frequently than her predecessor. Bloomberg

- Abortion ballot initiative. One ballot initiative to watch tonight: Proposition 115 in Colorado. The question, if passed, would prohibit abortion after 22 weeks except to save a woman's life. The restriction would shut down one well-known clinic that specializes in later-term abortions and mostly serves women who come from outside the state. NPR

‘She kind of reminds you of Margaret Thatcher’: Liz Cheney prepares to make her move Politico

"I want to demystify the idea that being a part of a movement requires a special skill or gift. It's all about where your passions lie."