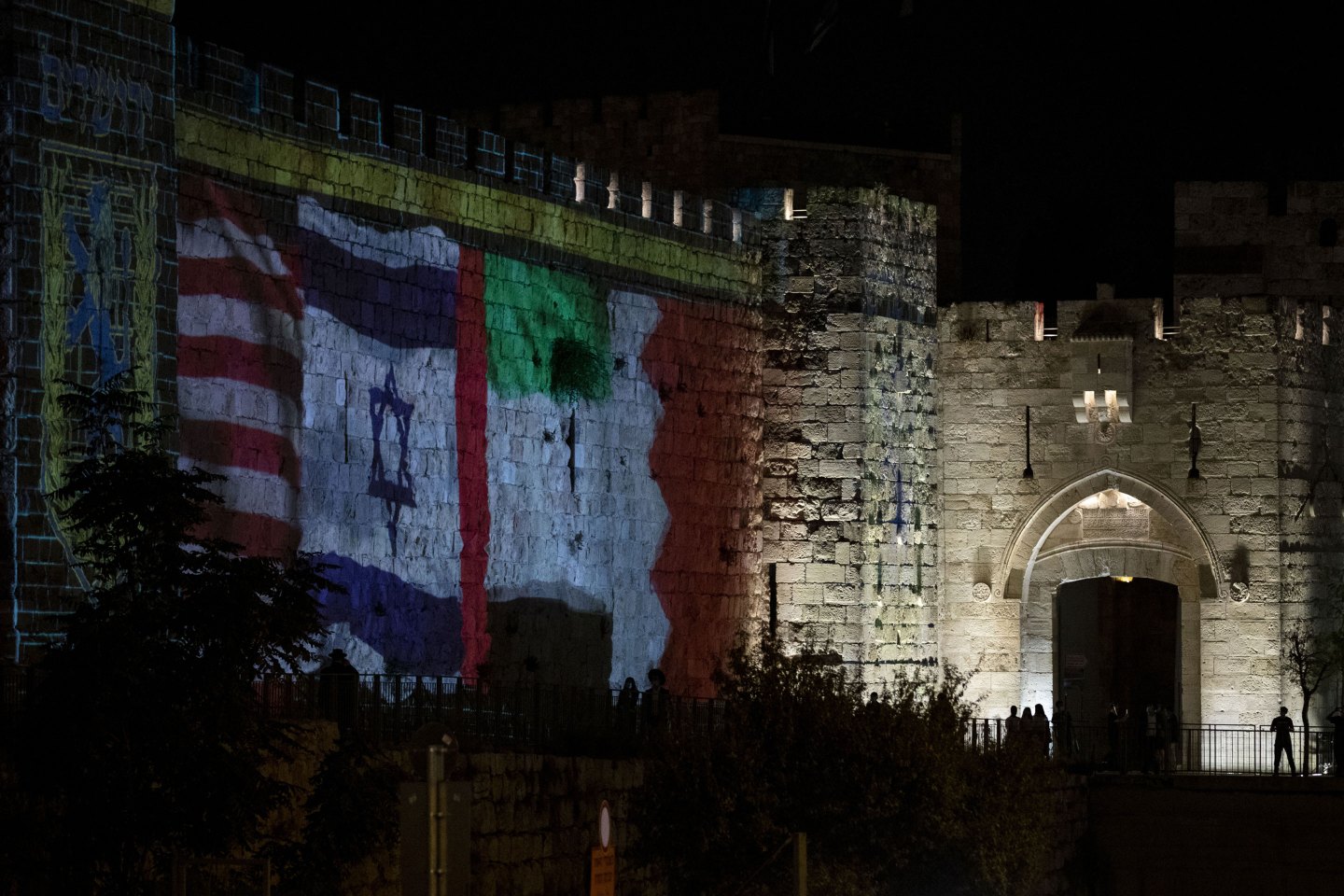 Flags of the U.S., Israel, the UAE, and Bahrain projected on the walls of the Old City in Jerusalem after the UAE’s and Bahrain’s normalization agreements with Israel were signed on Sept. 15, 2020. Now is the right time for the Bahrain-Israel peace agreement, the Abraham Accords, writes Bahrain’s ambassador to the U.S.
Mostafa Alkharouf—Anadolu Agency via Getty Images

I’ve read a lot of analysis by experts and pundits over the past few weeks about why Bahrain chose to normalize relations with Israel. Much of this commentary is well informed, but an equal portion misses the mark.

In many ways, the Sept. 15 White House signing ceremony and the Oct. 19 conclusion in Manama of a Joint Communique on the Establishment of Diplomatic, Peaceful, and Friendly Relations between Bahrain and Israel, as well as a collection of seven memoranda of understanding, are but the culmination of years of focused but patient statecraft.

Over a decade ago, we shut down the Israel Boycott Office, based on legislation passed by our national parliament. Since then, senior Bahraini and Israeli officials have met regularly in international fora.

In 2019, our then–foreign minister told Israeli journalists visiting Bahrain: “Israel is part of the heritage of this whole region, historically…The Jewish people have a place amongst us.” He made this statement, in part, because Jewish, Christian, and Muslim Bahrainis have been living together harmoniously on our island for centuries.

But why take these actions now? Because it is the right thing to do—for Bahrain, for the Palestinians, and for the region.

For too long, the Israeli-Palestinian issue has caused untold suffering for people of the Middle East. Alternating spasms of conflict and peacemaking over the past 70 years have produced a tragic legacy of death, destruction, and disappointment for too many generations of Arabs and Israelis.

The Middle East of today is a very different place than it was for previous peacemakers. Bahrain and its allies face new and unprecedented challenges: a virulent and existential threat of religious extremism, an ascendant Iran that has successfully co-opted governments and citizens across the region, and a rash of civil conflict that has created failed states to our north and south. In order to achieve sustainable peace in our region, cooperation among all parties is required.

A new generation of leaders has come of age in our region. They acknowledge the unprecedented challenges facing us and the need for more assertive and determined action. The peace agreement signed between Israel and Bahrain (known as the Abraham Accords, along with an Israel–United Arab Emirates peace agreement) is but the most visible manifestation of a greater will to take decisive steps in defense of our mutual interests and to shape our national destinies.

And yet, some things have remained constant. Not only do Bahrain and the U.S. share common interests and values, but the region cannot know true peace and prosperity without a strong partnership that unites us. Our agreement with Israel helps advance this strategic imperative, and it represents a continuation of Bahrain’s approach to peacemaking as the only realistic option for the advancement of our two peoples.

In this context, Bahrain has long been at the center of regional and international gatherings that focus on religious freedom, economic development, security, and civilizational dialogue. Events such as the Peace to Prosperity workshop, held in June of last year, underscore Bahrain’s principled commitment to building a durable peace that advances the livelihoods of everyone, including the Palestinian people.

What also has not changed is Bahrain’s commitment to a viable, independent Palestinian state. His Majesty King Hamad bin Isa Al Khalifa made that position clear when, in commenting on the agreement, he told the UN General Assembly on Sept. 24, “We consider this a cornerstone for achieving a just and comprehensive peace leading to the establishment of an independent Palestinian state, with East Jerusalem as its capital.”

Some commentary has speculated about the quid pro quo that persuaded Bahrain to sign onto the deal. Was it weapons, or financial assistance, or security guarantees? Such questions miss the mark. The establishment of relations with Israel gains us a strategic long-term advantage, not short-term tactical rewards.

The time has come for a new approach. Bahrain’s future—like its past—depends on openness, tolerance, and diversity.

We simply cannot afford to close our doors to the free—and peaceful—exchange of people and ideas. Our economy relies heavily on the manufacturing, tourism, and services sectors. The innovation and entrepreneurship that drive private sector productivity and growth require a steady stream of new sources of capital and expertise. Integrating Bahrain more fully into the economies of the broader Middle East is, therefore, a necessity that we expect will pay dividends for our future generations.

In his remarks at the White House Abraham Accords signing ceremony, Bahrain’s foreign minister, Abdullatif Al Zayani, noted that this achievement represents “a moment of hope and opportunity for all the peoples of the Middle East and, in particular, for the millions in our younger generations.” We decided to open new bridges of understanding and cooperation with Israel in order to secure a brighter future for the millions of young people who have never known normalcy.

Leaders must offer their people hope: the conviction that things can change for the better, that they are masters of their own destinies rather than victims of someone else’s actions. We believe that the newly defined relations provide an attractive alternative to the disappointments of the past by offering a realistic vision based on openness and inclusion.

The Middle East yearns for change, and for Bahrain, the time is now.

Abdullah bin Rashid Al Khalifa is the ambassador of the Kingdom of Bahrain to the U.S.