Amazon’s activist employees are sowing the seeds of unionization 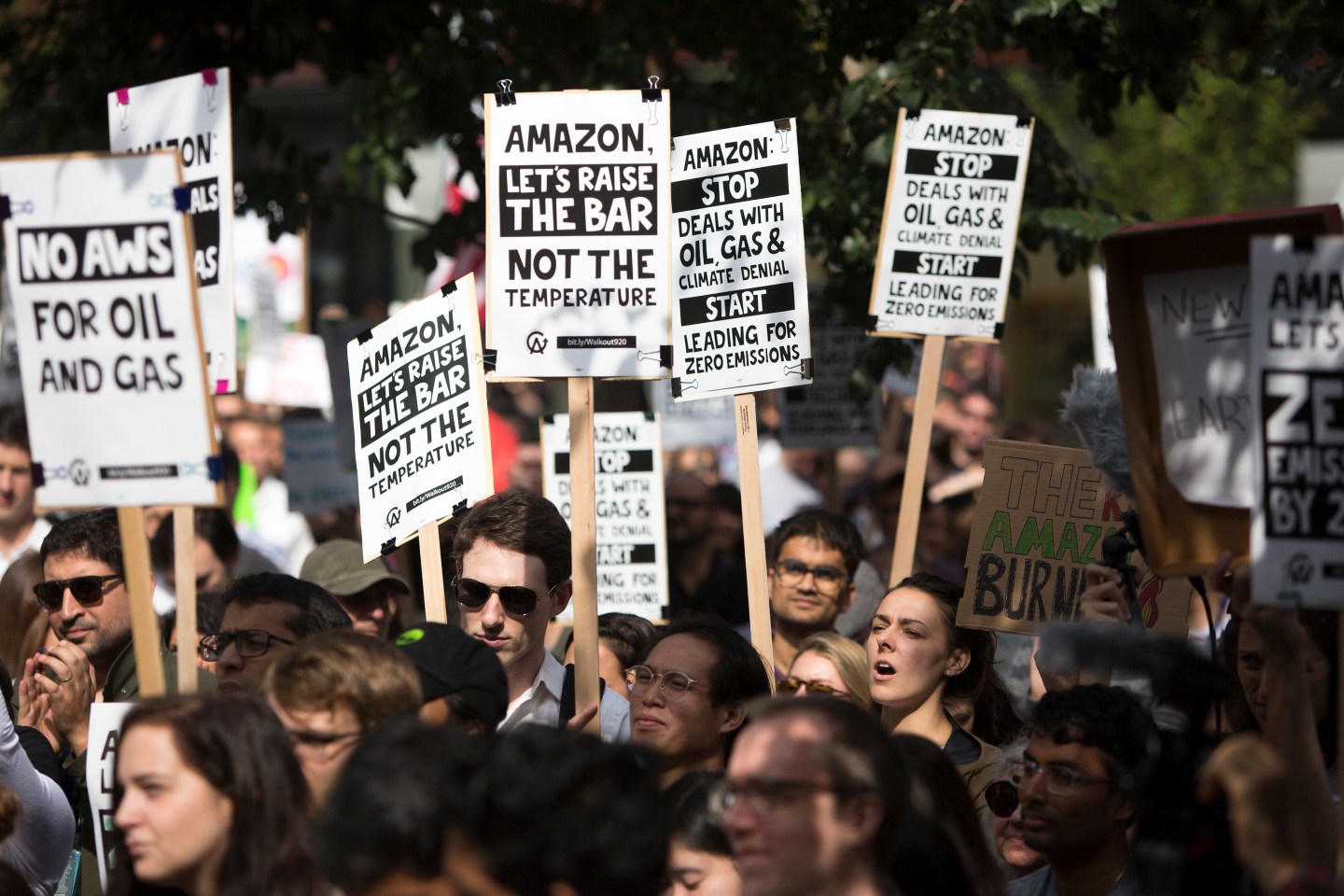 Amazon Employees for Climate Justice lead a walk out and rally at the company's headquarters to demand that leaders take action on climate change in Seattle, Washington on September 20, 2019.
Jason Redmond—AFP/Getty Images

At Amazon, employee activism is morphing into something more like old-fashioned union organizing.

Employee activism has been a growing trend in recent years, new and notable because workers have been speaking out against their employers on issues unrelated to pay, benefits, or working conditions. Employees of Google, Microsoft and Amazon walked out to support the Global Climate Strike in September 2019, with Amazon employees specifically opposing the company’s climate-related policies; more than 8,000 workers signed a letter to CEO Jeff Bezos demanding that Amazon cut its carbon emissions and take other steps to reduce use of fossil fuels. The day before the walkout, Bezos announced that Amazon would be carbon neutral by 2040, but the protesting employees said that target wasn’t aggressive enough.

Other employee activists have chosen other non-work-related issues. Employees at Wayfair protested the company’s sale of furniture to immigrant detention facilities. Google workers marched against the company’s generous severance deal with an executive accused of sexual misconduct. Microsoft employees called on the company to cancel its contract with the U.S. Army because the technology involved “is designed to help people kill.”

Now the group that organized the Amazon climate walkout, Amazon Employees for Climate Justice, is planning a rally on Saturday, October 17, calling on the company to give employees a day off to vote. That’s squarely a workplace issue of the type that arises in union negotiations. (AECJ has already engaged with union leaders.) When AECJ held an online conference in April, a featured speaker was AFL-CIO president Richard Trumka, followed by a local labor leader. The AFL-CIO has helped Amazon employees with their organizing efforts. Secretary treasurer Elizabeth Shuler told Fortune in September, “The tech industry is the next frontier for the labor movement.”

At the planned Saturday rally, workers intend to gather at Amazon’s Seattle headquarters campus and march to an Amazon-owned Whole Foods Market, then go by car to an Amazon distribution center. Grocery and warehouse workers, not software writers, have been the focus of organizing efforts at the company.

Amazon declined to comment on AECJ or the planned event but said, “We have supplied all of our employees with information on how to register to vote, details of their local polling locations and how to request time off to vote. In all 47 states with in-person voting, employees that lack adequate time before or after their scheduled workday to vote can request and be provided excused time off. The number of hours and pay provided to employees varies by state in line with local laws.” Amazon Employees for Climate Justice did not make anyone available before Fortune’s deadline.

Amazon is America’s second-largest employer, with an estimated 1,000,000 employees worldwide; No. 1 is its giant competitor, Walmart, with 2.2 million. Both companies are almost entirely non-unionized and by far the most attractive targets for unions, which have been in long-term decline as players in the U.S. economy. A significant question for employers and unions now is whether other employee activist movements will hold to their original beyond-the-workplace purposes or transform themselves into union organizing efforts.